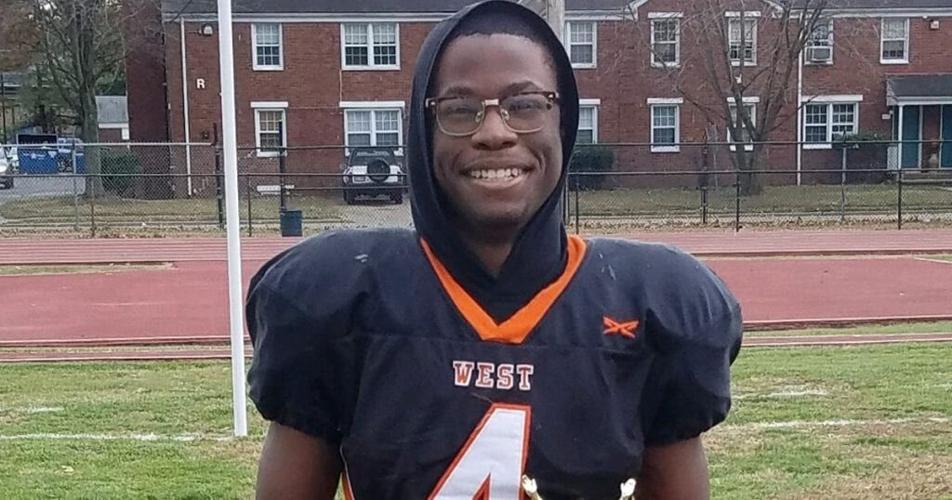 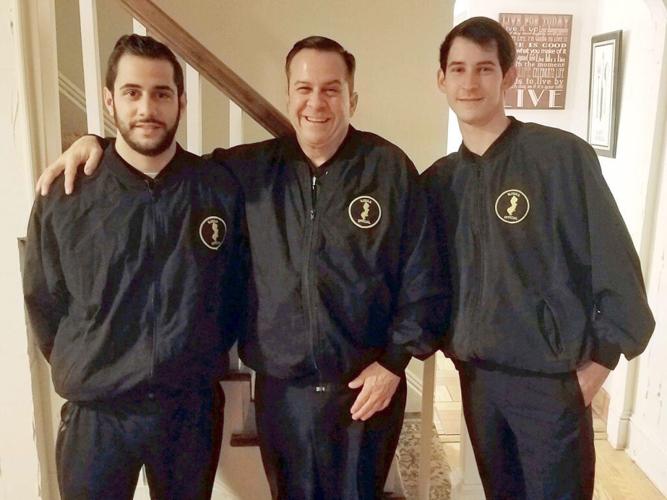 Jared, John and Connor Young will be the first local officiating team to consist of a father and two sons when they take the court Jan. 18, 2020 at Florence High School. (Photo by Rich Fisher.) 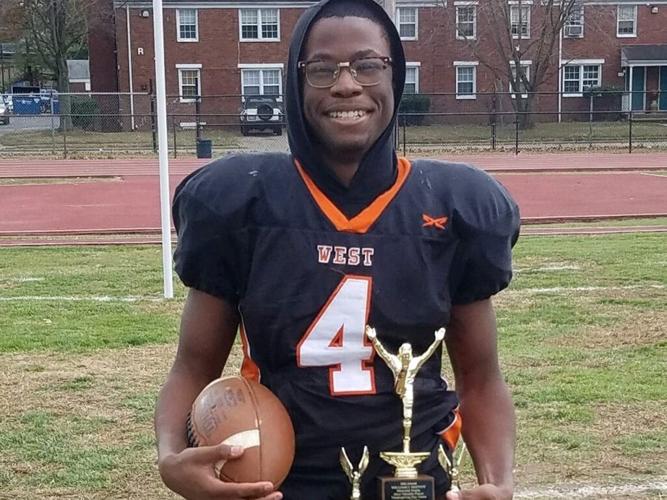 Jared, John and Connor Young will be the first local officiating team to consist of a father and two sons when they take the court Jan. 18, 2020 at Florence High School. (Photo by Rich Fisher.)

If Kevin Boswell has not yet decided on a profession, he might want to look into being a Hollywood writer.

The Hamilton West junior certainly knows how to produce a script with a happy ending.

On Nov. 28, Boswell not only led the Hornets to their first win over Steinert in five years, but also rushed for 278 yards to set the school single-season record. The “Boz” finished with 1,665 yards breaking Shelton Snead’s 1991 mark of 1,439.

It was a heck of a way to culminate a season in which the 8-2 Hornets regained their status as one of Mercer’s top programs.

“Setting the record was in the back of my mind,” Boswell said after the 24-0 win over Steinert. “But coming out and winning this game means more than the record. It’s a team effort to get this win.”

In essence, Boswell’s record is also a team effort, as his offensive line provided some big-time holes. But senior right tackle Zach Medina noted that sometimes the Boz did it on his own.

“For the o-line, getting that record was a priority,” Medina said. “With his ability to see a hole, it could be small, it could be big, he’ll get through it. Even if our o-line doesn’t do great he’s still doing what he does and getting positive yards.

“The offensive line did a great job this year,” Papero said. “I’m really proud of them.”

A line can open holes, but it’s up to the running back to use them, and Boswell certainly has that ability.

“He’s obviously explosive,” Papero said. “And the way he contorts his body, it’s hard to get a clean hit on him. I don’t know if he took a clean hit all year. He’s kind of like (NFL Hall of Famer) Barry Sanders. You can’t get a good hit on him and the vision is there.

“There’s times where I look at film and see where maybe things could have been more open; but I don’t want to over-coach him. I just let him trust his vision, trust his instincts, and I just let him go out there and be an athlete. He makes me look real good.”

What makes the Boswell story so remarkable is that he is just in his third year as a running back. He went through Pop Warner as a defensive back, which he still plays. But when then-head coach Hoglen and his staff, which included Papero, saw the Boz’s talents and were certain he should carry the ball.

“We knew about him,” Papero said. “You hear about, ‘There’s a kid Boswell coming up, keep an eye on him.’ Our big hope, as it is with all our kids, is that he stays in public school and comes to Hamilton West. We immediately saw how comfortable he looked with the ball in his hands. At youth camp, he was the best athlete on the field. Every game I see him now, he’s the best athlete on the field, so you just have to use your athletes.”

When the topic of making him running back came up, Boswell offered no argument.

“That’s every kid’s dream to play running back,” he said. “They said they wanted to put me at running back, I said ‘All right, I’ll just need to work a little harder.’ I had to put on some weight, get a little faster.”

That first year, Boswell not only had to improve his physical stature, but his mental outlook.

“He’s grown so much, not only as a player, but off the field,” Papero said. “Like any other freshman, he was a little immature, ran his mouth a little bit. Just the difference between that, then and now, I don’t think people realize how good of a kid he really is.

“On the field, he had to get out of that youth football mode where you can just hit the corner and score every time. That’s not how it is on this level. You have to be a patient runner, learn to hit the hole and take a three or four yard gain, or even a one-yard loss sometimes because he has to live for another down.”

Medina recalled when Boswell was introduced to the varsity.

“I came in sophomore year and here he comes,” the lineman said. “Everybody’s like, ‘Oh they brought in a freshman, here comes Kevin.’ My sophomore year he didn’t have a great year, but we knew what he was. We knew what he could do and he came in last year, got 1,000 yards. He came in this year we knew he was gonna have the biggest year of his life.”

As a freshman, Boswell rushed for a modest 386 yards but did have a 100-yard effort against Notre Dame. As a sophomore, he announced his presence by collecting 1,143 yards and 10 touchdowns, and going for over 100 six times.

This year’s record-setting total included nine 100-yard efforts and four games of over 200 yards, including a career-high 284 against Hightstown. Boswell scored 20 touchdowns and averaged 9.5 yards per carry.

And not just at running back, as Boswell did so much more.

“He catches the ball,” Papero noted. “He was the lead blocker on a touchdown (on Thanksgiving). He returns kicks, he returns punts, he’s a punter, he plays D-back. He’s an all-around great football player. I couldn’t be more proud of him.”

Boswell did, indeed, throw the key block to get Tolu Adeaga into the end zone against Steinert.

“He’s such a great team player and he can do it all,” Adeaga said. “He always has our backs and we always have his.”

While the statistics Boswell piled up were impressive, the main number he was concerned with was the Hornets eight wins after suffering two straight losing seasons.

“That makes everything way more special,” he said. “All the work we put in in the off-season worked out. We came together and got some Ws.”

For Boswell, it’s as much about the camaraderie as the results.

“Winning on Thanksgiving was big,” he said. “But overall the whole season was like a highlight. I just like going to practice. Practice helps bring us all together as a team.”

It’s that kind of attitude that makes Boswell a winner. He doesn’t concern himself with his productivity as much as the team’s. But the things he did this year were hard to ignore for the 12th Man TD Club members.

“He definitely deserves that award,” Papero said. “In my opinion, he’s the most explosive player in the area. He can score from anywhere on the field. He can do it all. It’s nice to see the other coaches in the county gave him the credit he deserved and gave it to him as a junior. Nothing surprises me. I was hoping he would win it because he does deserve it.”

And Snead, the man who he surpassed, felt that Boswell deserved his record.

“He’s a very elusive, good running back,” said Snead, who attended the Thanksgiving game. “He works hard. He told me he was gonna break my record, and I told him, ‘Hey, records are made to be broken.’ So all year I was pushing him to break it, and he finally broke it.”

Boswell is taking dead aim on another of Snead’s marks, as he needs just 66 yards to break the Hamilton career rushing record of 3,245. The Boz admitted that would be special.

“That one I’m thinking about,” he said. “First game next year, I’m going for it.”

Snead laughed when told he at least has one more year to be top dog.

“Yeah, another year, but I had it for 20 years, it was time for some new blood to get it,” he said. “I’ve got no problem with that. And he’s a good kid. Me and his father grew up together so that makes it even better.”

The Pennsylvania resident then added with a laugh, “Now I have to get my son to move back here so we can get the record back in the family.”

And while Boswell is looking to overtake Snead one more time; the goals for his senior season go well beyond that.

“I want to go to states, and I want to win it,” he said. “I want the ring on my finger. I wanted that this year but we came up short, so I want it next year.”

With Boswell’s penchant for scripting happy endings, anything is possible.