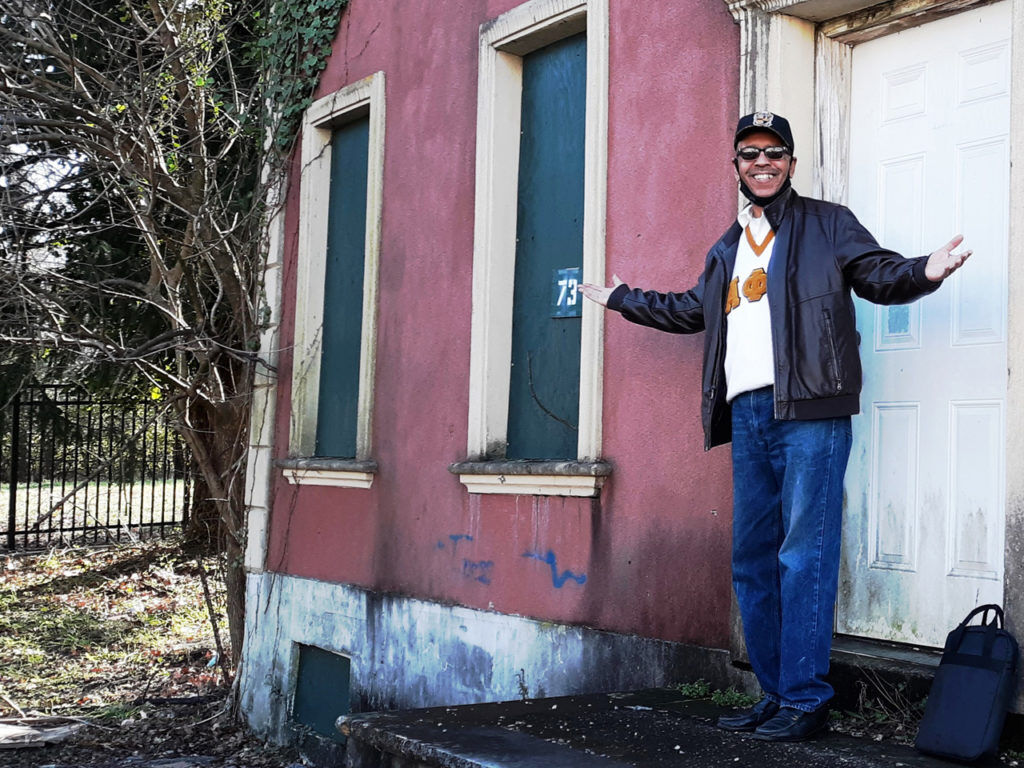 Algernon Ward at the site of the former Locust Hill Cemetery, where plans are underway to develop the site into an interpretive center and memorial for Trentonians of African ancestry. 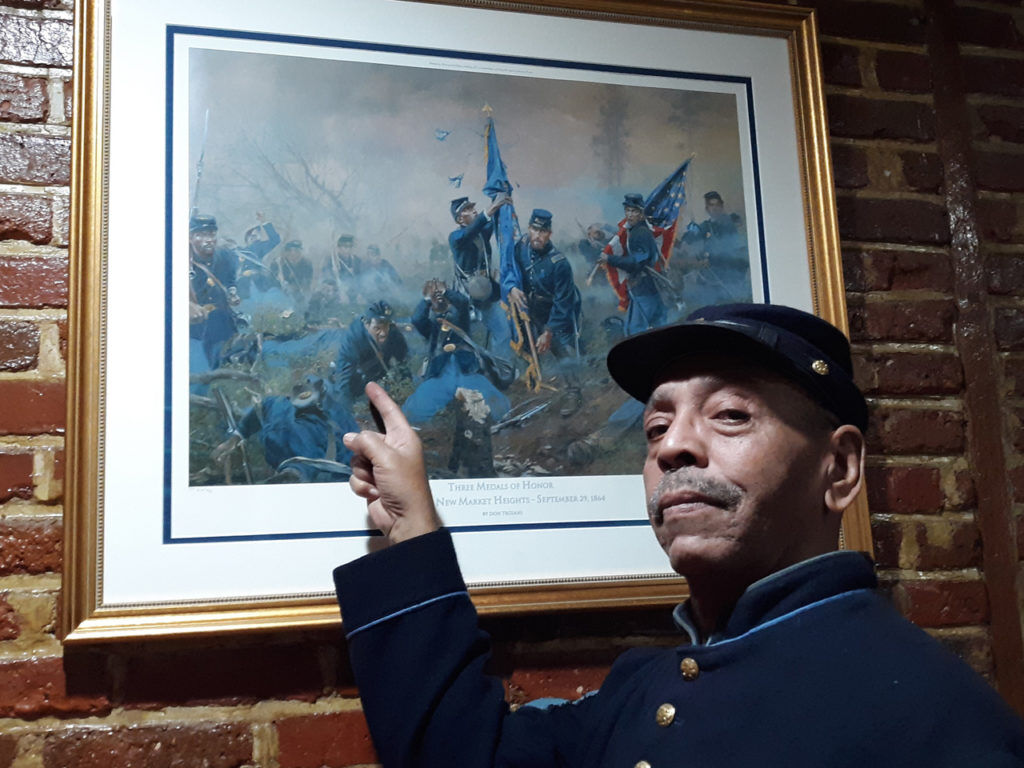 Algernon Ward points to a print of a painting by Don Triaini for which members of the 6th Regiment served as models.

Algernon Ward is hopeful that 2021 will be the year that brings the Locust Hill Project closer to fruition.

Ward, 67, and the 6th Regiment of the United States Colored Troops Civil War organization are leading the charge to develop the lot on Hart street in Trenton’s East Ward into a place that memorializes the resting places of Trentonians of African ancestry.

“We’re excited to get this going,” says Ward recently during a tour of the Hart Street site.

The project focuses on the physical restoration of the Locust Hill African Cemetery and the adjacent building to serve as an interpretive center for the cemetery.

The building will also be used as the office space for the 6th Regiment —- the group selected by the City of Trenton to lead the project — and a venue for local history and humanities-related programming.

Ward says the project moving into its third year is part of other efforts designed to accent Trenton’s Black history and attract individuals interested in taking heritage tours.

Other sites include the 1856 Higbee School, the first free school for African Americans in Trenton, and Carver Youth and Family Center, a social and cultural center for Trenton’s Black community. Both are on the National Historic Registry.

Since its site is near the Assunpink Creek, the project is also included as a feature of the currently active Assunpink Park Project.

A 1998 Hunter Research report to the city puts the project into perspective and demonstrates how the cemetery could have been forgotten:

“Today, it is hard to imagine that this plot of ground between Hart and Oak streets in East Trenton once served as the city’s principal African-American cemetery. There are no visible stones, no statues, no manicured lawn or neatly trimmed shrubbery. Instead one finds a startk and overgrown urban lot surrounded by a tall chainlink fence.”

After noting that the history of the site was elusive, the report written by the Trenton Historical Society’s current president, Damon Tvaryanas, says, “Its existence is recorded only by a handful of newspaper articles and half-hearted mentions in a few of Trenton’s principal histories.”

What is known is that “the cemetery came into existence in 1860 when the property was purchased by the Mount Zion African Methodist Episcopal Church for use as its burial ground and was put to this purpose for Trenton’s African American citizens for about a half a century before finally fading slowly into semi-forgotten oblivion in the first quart of the 20th century.”

Incorporated in February, 1811, Mount Zion AME was the first African-American religious organization to be formed in the City of Trenton. Although slavery of people was a thriving practice at the time, the Trenton church’s congregation was composed of free Blacks.

“After slavery’s abolition, the church was principally associated with the middle and upper social and economic strata of Trenton’s African American population,” notes the report.

As Ward and the report make clear, the Locust Hill Cemetery is tied to Mt. Zion’s first cemetery located on Hanover Street adjoined to the Friends’ Meeting House property. The plot is noted for being Trenton’s earliest known burial place of African Americans — first mentioned in a 1779 deed.

When Trenton’s Common Council forbade the church from continuing to the use the property for burials, Mt. Zion developed and executed a plan to secure to sell the Hanover Street plot and use the funds to secure the new location and to re-inter the bodies.

Mt. Zion managed the cemetery until 1873, when it relinquished operations to the specifically designed Locust Hill Cemetery Company. Yet the church maintained its affiliation with the grounds.

According to the Hunter report, little is known about the activity of the cemetery through the rest of the 19th century, including when burials ceased on the spot.

As Ward stands in front of the grassy lot, he says the cemetery had been so neglected in the first half of the 20th century that city officials were unsure if one actually existed there.

But neighborhood lore kept its memory alive, and city officials and historians became more involved. Studies determined not only the existence of a cemetery but the existence of nearly a hundred graves — including several who fought in the Civil War.

Ward says he officially became involved with the cemetery project in 2019 after the City of Trenton initiated a meeting to develop a partnership with a city-based nonprofit to develop the site into an historic destination.

Ward attended as a representative of the 6th Regiment — a nonprofit organization founded in 2000 to tell the story of African Americans’ contribution to the military history of the United States.

The organization takes its name from a Civil War unit that comprised soldiers of African ancestry from the Delaware Valley — six of whom were from Trenton. Members also create events to show Black involvement in the Revolutionary War and World War I.

The group’s Civil War links to the Locust Hill soldiers and its active partnership with the Old Barracks Museum in Trenton proved a winning combination for city partnership.

In July, 2019, J.R. Capasso, the Brownfield coordinator for the City of Trenton Economic Development office, noted the following in a grant application:

“The City of Trenton is happy to provide this letter of support to develop a vacant and abandoned property in East Trenton near the proposed Assunpink Greenway and the historic Locust Hill Cemetery for use by the 6th USCT and for the development of a museum and display space that commemorates the commitment of African-Americans to this county’s military efforts through history. The city is especially interested in the 6th USCT providing opportunities to educate all people about the efforts and sacrifices of African-American troops in foreign and colonial wars through the present day.

“In support of this project, the city is currently foreclosing on the former residence located at 73 Hart Avenue … which allows the city to sell this property to a nonprofit organization for uses that are in conformance with the redevelopment area plan. The future use of the property by the 6th UCST is understood to be as follows:

“Meeting space for, and other related uses by, the 6th USCT; Public display space for educational and historic information pertaining to the activities of the 6th USCT and the involvement of African-Americans and other ‘Colored Troops’ in the U.S. military in foreign wars and during the colonial era wars in North America; and Educational and historic information pertaining to the adjacent Locust Hill Cemetery that contains the remains of at least 94 Trentonians, including at least 10 Civil War veterans.

“Once the city obtains ownership through ongoing tax foreclosure, the property at 73 Hart Avenue can be sold to the 6th USCT for nominal consideration contingent upon approval by the City Council.”

Ward says Capasso’s letter allowed the 6th Regiment to secure an initial grant from the New Jersey Council for the Humanities (NJCH) and develop preliminary architectural and interpretative site plans.

Although the group is ready to apply for NJCH implementation grant and has been in discussion with other funders to begin building renovation, Ward says the group is looking forward to the council approving the sale of the property to the 6th Regiment — with a recession clause.

“It’s difficult to articulate how much the Locust Hill Project has stimulated a renewed interest in the Locust Hill Cemetery and the surrounding neighborhood,” says Ward.

“The City of Trenton has designated the Locust Hill Project as the focal point of a housing improvement initiative for the adjacent streets. Because part of the cemetery abuts the Assunpink Creek, its restoration has been incorporated into the existing Assunpink Greenway Project.

“Beyond the seven stakeholders meetings, door-to-door canvassing assured that every resident of Locust Hill was informed and engaged. A survey was distributed to every home in order to gather the input of those who were unable to attend the scheduled meetings. Since it was the residents themselves who have been steadfast in their desire to see this project proceed, our efforts were received enthusiastically.

“Mrs. Ethel Wilkins, the last occupant of the house where the mini-museum will be located, has provided the project with invaluable insights into the historic architecture of the building and the cemetery grounds. Mrs. Wilkins’ grandson is leading the procurement of a monument for the military veterans.

“Community members have insisted that they organize the acquisition of a monument for the civilians buried in the Locust Hill Cemetery as their contribution to the project. This is a undisputable indication of the level of commitment the community has invested in the Locust Hill Project.

The historic moment is not lost on Ward, a retired research scientist at the New Jersey Department of Health and one-time city council candidate.

“My mother was the first black operating room technician at Helene Fuld hospital, and my dad worked at various factories — he worked for Trane Company,” he says about his family.

Although he attended Trenton Central High School and Trenton State College (now the College of New Jersey), he quickly turns to how meeting reenactor Fred Minus opened him to a new world.

“I would see (Minus) downtown in uniform. Then he’d ask me to go with him to see the Civil War and Native American collections in Hamilton.

“When he found out that I played the trumpet (in high school and in a band), he gave me a bugle and said, ‘You have to come to reenactment. It was like going into history.

“I went and got a uniform, and I was done. It was like walking into a time machine. I could not believe the dedication that people had.”

Ward says he and the other Black reenactors were so “fired up” that they started they created the all-volunteer 6th Regiment and had experiences “we couldn’t buy.”

That includes being invited to march during in the parade for United States President Barrack Obama’s second inauguration as well as being in the color guard for various parades, including Veterans and Memorial days and even Miss America.

Yet, during an interview in his Trenton home, he says one of the greatest honors was for the members of the Trenton-based 6th Regiment to be the models for a painting of the historic 6th Regiment in battle rendered by noted military scene painter Don Triaini for the Union League in Philadelphia — the organization that helped fund the Civil War groups.

“We came from obscurity to paintings,” he says, pointing to himself in a print of the painting displayed with his collection of African face masks hanging in his Trenton home.

Turning back to the Locust Hill Project, Ward says he while he had hoped the city council would have approved the group’s control of the property by now, he anticipates it happening soon.

“We promised (the community) that we would get this done, and people want to see it — people in their 80s. We can’t disappointment them. This is honoring our ancestors — something pretty straightforward for the city to accomplish.”