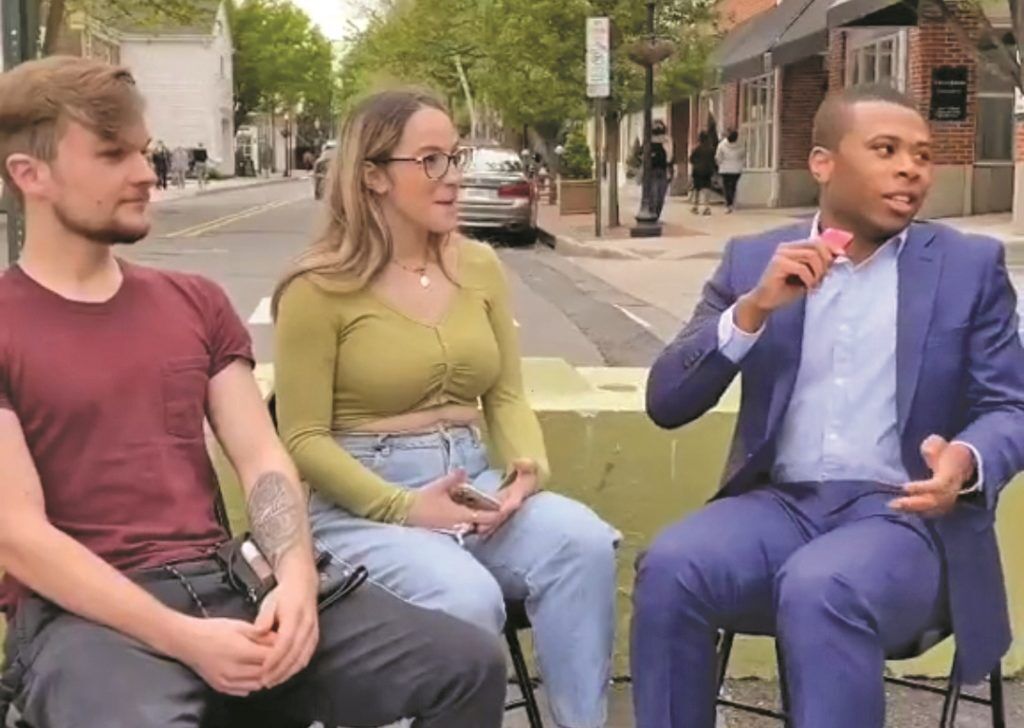 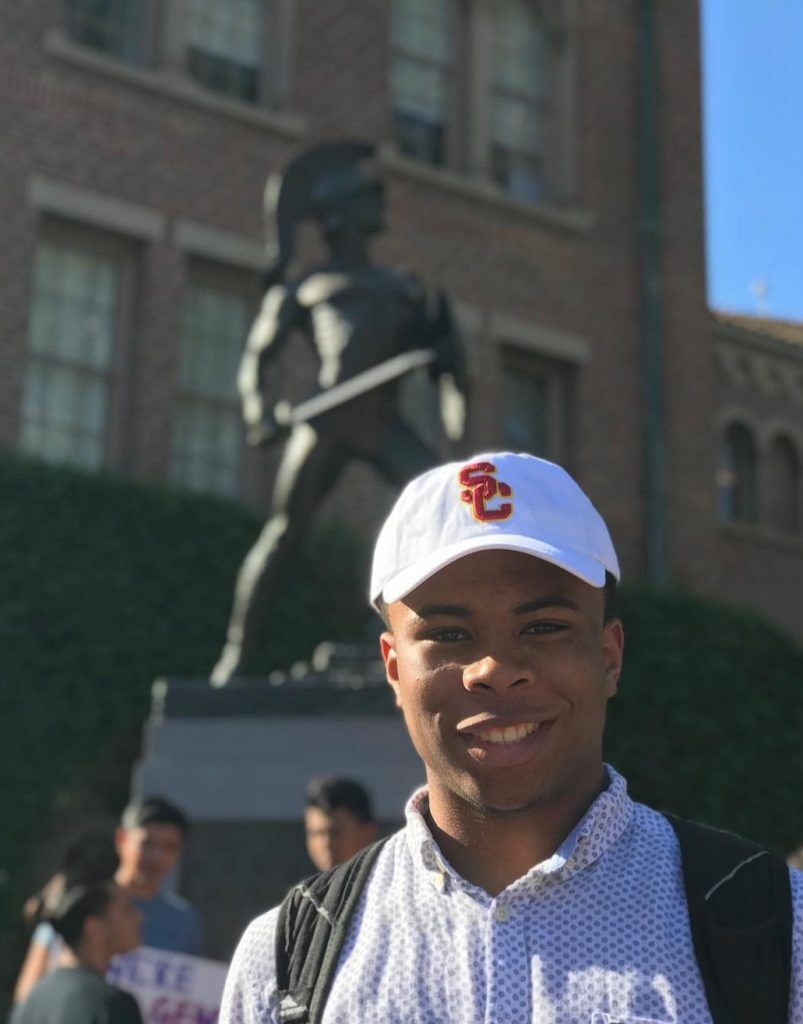 Toby Ilogu during his first semester at USC. 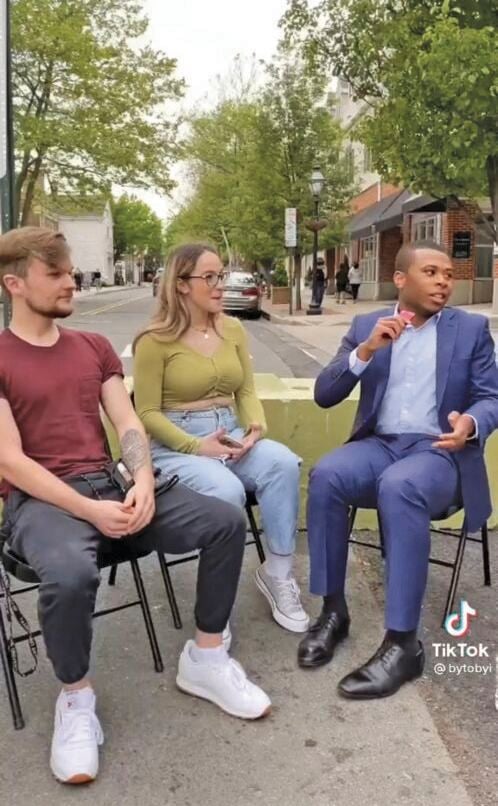 Toby Ilogu is always up to something. The 19-year-old Montgomery resident loves to dive headfirst into a project, whether it’s studying cryptocurrency or making short films.

Now, he’s channeling his energy into TikTok, where he’s amassed over 100,000 followers, starting with first-person videos and evolving into the Everyday Show series, where he dons a suit, sets up camp in Princeton and conducts man-on-the-street-style interviews with anybody who wants to participate.

Ilogu, a graduate of the Lawrenceville School and now a film student at USC, asks whimsical questions like “Are you stupid?” and “Name that Black celebrity.” The videos usually take their own form from there.

“I’m very much into that raw, semi-awkward humor,” he said.

We sat down with Ilogu and talked quarantine creativity, Gen Z filmmaking and more. An edited version of the interview follows.

Six09: What was it like to start your first year of college in the middle of all of this?

Ilogu: I was able to do my fall semester. Film school was my dream. Early on in high school, I knew that I wanted to pursue video or film school in some capacity. USC was, like, the college on the hill. It was my dream school. When I got in, it was a dream come true.

I was living the dream for a few months until COVID came around and really just shook everything up. My dream school turned into a nightmare. I did this fall semester online, and right before the spring semester, I thought, “I can’t do this. I hate this experience.” It was supposed to be the best thing in the world. I talked to my parents and very heavily petitioned to take the spring semester off. That’s what I ended up doing.

Six09: Are you going back in the fall?

Six09: You said that you’ve been interested in filmmaking forever. What sparked that interest for you? Were there any filmmakers that you admired as a kid? What made you dive into that?

Ilogu: A lot of people might say, “I grew up watching these films. My parents put me onto Scorsese and Speilberg.” Quite honestly, that wasn’t me. I grew up on YouTube. I was on YouTube earlier than I should’ve been. When I was growing up, my parents told my two older siblings and I, “No watching TV during the week.”

Most of elementary school, I was reading a lot. I was always checking stuff out from the library. Then, we got a laptop, and that’s when I started perusing the internet. YouTube was there, and I was like, “Well, it’s not TV.”

Ilogu: Exactly. I looked up to YouTube stars early on, more than any film director.

Six09: I feel like that’s kind of the path that a lot of creators in your generation are following. Do you see that, too?

Ilogu: Yeah. At film school, there are a lot of purists. People will say, “The YouTube stuff, that’s not real filmmaking. TikTok is a bastardized version of visual media.” But this is the stuff that I like. By all means, people can pursue what they want to pursue. I’ve heard that you go to a classroom of third graders, and half of them will say they want to be YouTubers when they grow up. Those are the people they’re engaging with.

And it’s such a versatile medium. Anybody with just about any passion could make content around that passion. I think it’s just a matter of what people are being exposed to at a young age.

Six09: Is that how you got into TikTok?

Ilogu: From the start, I always took a very strategic approach to TikTok. I didn’t just stumble onto the app. I knew of TikTok when it was musical.ly. I would watch these YouTube compilations of cringey kids lipsyncing to songs. I was like, “I don’t think this stuff is for me.” But then I thought, “Wait a second, there’s so much potential.” The app can be anything that you make it. You can’t pigeonhole a whole platform just by the content that a handful of people are making.

My first venture into TikTok was when I got to college, toward the end of 2019. I started with a joint account. The plan was that a few of us on the floor I was living on were going to make cinematic TikToks. Eventually, most of the group lost interest. That was it for some time. I kept the app for a little bit, then deleted it. It was on and off until quarantine, where I said, “Yeah, let me start making TikToks.”

I feel like there’s a lot of potential to just grow an audience. I’m not exactly sure what it is I want to do in the future, but whatever it is, if it’s creative, it’s going to need an audience.

Six09: Did it kind of help you pass the time during quarantine after starting at your dream school and then coming back home and doing it all online? Did TikTok help you channel your creativity?

Ilogu: Yeah, that’s a narrative that a lot of people seem to have. That’s exactly what it was. Also, me personally, I always have some sort of mission. I like to feel like I’m working toward something. I had a whole bunch of different things I was doing, but TikTok was the throughline.

All throughout quarantine, I was learning about different things. First, it was investing and technical imbalances and cryptocurrency. Just general entrepreneurship. I launched a few Shopify stores. But the main thing was TikTok.

Six09: When did you get started with The Everyday Show? What was the inspiration behind that?

Ilogu: There was a lot leading up to it. I was on TikTok trying to grow. I think I reached about 10,000 followers by doing money story videos. I would find a headline related to money, like Tom Brady’s real estate career around the Super Bowl. I was like, “Okay, here’s Tom Brady. How can I put a money spin on this?” because that was the niche that I was working in.

So that was where I was. Then I was like, “I don’t know if I want to do this.” I also felt a little bit of imposter syndrome. I’m saying all this stuff about entrepreneurship, but I haven’t made many moves there myself. In March I decided to tell my own story. When I came back to TikTok, I was a little lost, to tell the absolute truth. All I knew was that I had to keep making something. I had to keep making things again.

I’ve always liked comedy, quirky stuff. Maybe my sense of humor is a little weird, a little out there. I’m very much into that raw, semi-awkward humor—Sacha Baron Cohen. I think going undercover and getting those natural reactions makes for great content, but it has the potential to expose certain things socially and culturally that can really be profound.

Prior to that, Tyler, the Creator had a show on Adult Swim called Loiter Squad, which was really just him and his friends screwing around. I was making these comedy TikToks, and I just had this idea out of nowhere to put on a suit, look at the camera and act like I was a lawyer. I’d say, like, “The person who sent you this video has written a statement for me to read, and it goes as follows: Give me back my hoodie, you filthy whore.” I’d seen “send this to a friend” videos, and I wanted to put my own spin on it. So I was wearing the suit already. I had a list of goals and on it was “I want to reach 1 million followers by the end of 2021,” with a whole map of different milestones.

Ilogu: Yeah. The lawyer videos were fun, but I would have to do a few of those every single day just to see even close to that type of growth. Something needed to change. I was vaccinated back in March. Before that, I was trying to figure out how to work within COVID parameters. Once I was vaccinated, I decided to go out. There are bedroom creators on TikTok who quite literally make content in their bedrooms, and they can be really successful. What I find is that the most viral videos are always interacting with other people. There’s a certain element that you can’t get from a bedroom.

I believe as a creator, you need to break the bedroom wall at some point, or else you’ll always be confined to those four walls. I know that the public interview is a viral format. It just works. I said to myself, “How can I do this in a way that is true to me?” I definitely got inspiration from Jimmy Kimmel’s Pedestrian Questions. And I knew that I wanted to carry the suit somehow. It was working before. I came up with the idea, and I just sort of did it.

Six09: You seem so well-suited to that man-on-the-street kind of interview. Does that come naturally to you, or do you have to psych yourself up before you go outside and start asking people these questions?

Ilogu: I do have experience with video journalism. Lawrenceville has a newscast, and from 2015 to 2019, that was my thing. That’s where I learned how to edit videos. Everything I know about videography, framing, the on-camera presence, everything I know came from that video news club. It really is one of the best high school news shows in the world. I’m not just saying that. What they’re doing is very special, and it gave me everything I needed to know to keep doing this creative stuff.

I have experience on both sides of the camera. But there are awkward moments. I’m not a natural at all. And I put it into the video. If it’s awkward, it’s because I’m awkward in that moment. Sometimes I’m in character, kind of a game show host, and other times, Toby just sort of seeps out, and Toby doesn’t always say the right thing at the right time. Toby isn’t always the most conversational in the traditional sense. I think that just adds to the show. One of the Are You Stupid videos, the person said “Yes.” I said, “What’s the last dumb thing that you did?” “This interview.” I was like, “Wow, she really said that.” I had to walk it off a little bit. I was shook.

Six09: Has it been easier to approach people now that people are getting vaccinated and things are starting to open up a little more?

Ilogu: Oh, definitely. A lot of people are a lot more comfortable being approached and being around other people. Honestly, I think my show kind of celebrates that. It celebrates getting back to some type of normalcy, even if that’s just everyday interactions that you have on the street. I guess that’s building a little bit of a narrative around the name. I was thinking, like, Late Night, The Tonight Show. How about The Everyday Show? I wanted to post on TikTok just about every day, so I thought it could work. Beyond that, I’m approaching everyday people on the street. One way of growing on social media is a name drop. But the main draw isn’t toward the creator or the content. It’s likely toward that other person.

I feel like that’s not very conducive to a long-term relationship, especially if you’re a new creator. With everyday people, I’m not chatting with celebrities. It’s not an aspirational thing I’m going for with my content. It’s more like conversations. Yeah, they’re awkward, but that’s like. Life is awkward. We gotta lean into that more.