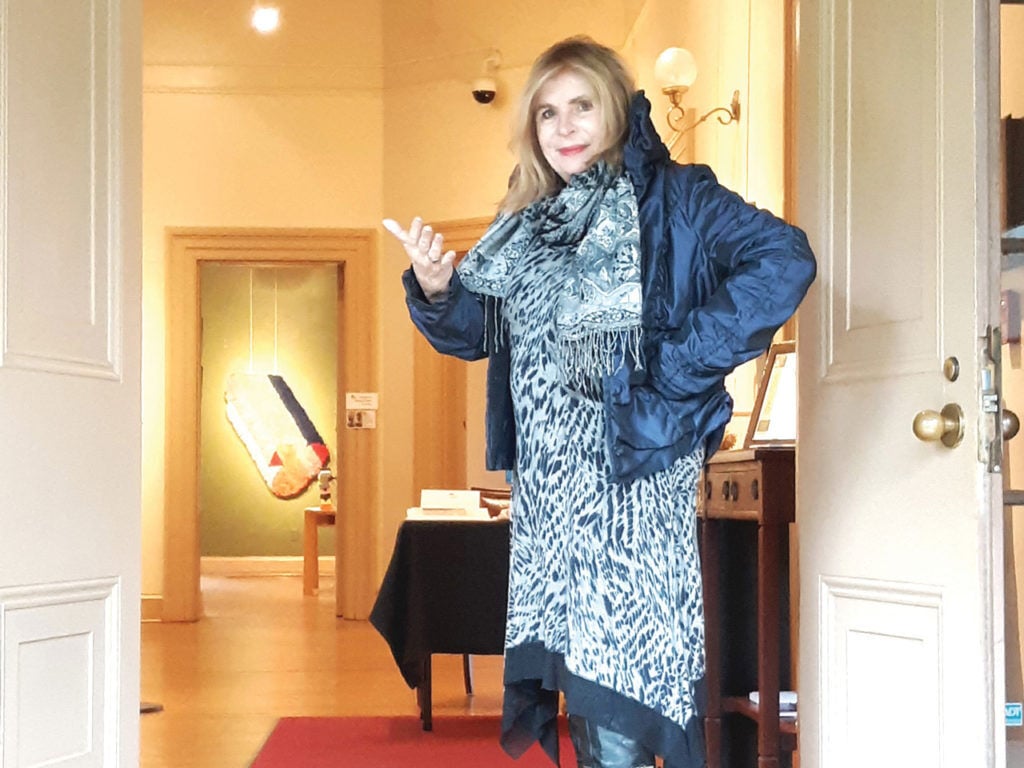 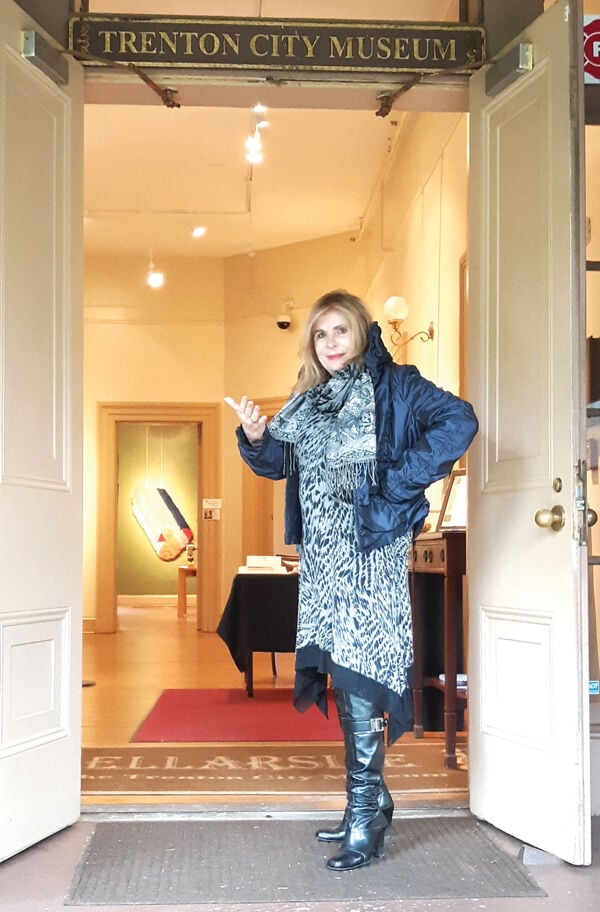 Joan Perkes and the Trenton City Museum are ready to welcome visitors back to the museum’s physical space.

Trenton Museum Society president Joan Perkes seems to offer a slight smile beneath her mask as she says the word, “Stressful.”

That’s how she sums up the preparations for the society’s recent Trenton City Museum reopening and the installation of the current show “The Conversation Continues” on view through the end of November.

Located in the capital city’s Cadwalader Park and operated through a partnership with the City of Trenton and the nonprofit TMS, the Trenton City Museum is just one of a small number of area museums and galleries that took advantage of Governor Phil Murphy’s guidelines allowing visual art venues to reopen.

Perkes’ stress was related to concerns about the museum’s role in the community and the visitors.

“We can’t be led by fear, but we need to be led by vigilance,” says Perkes, a New Hope resident who has been volunteering with the museum for eight years, including the most recent five as president of the TMS.

“Our demographics and volunteers are older, so we want to protect them and ourselves as best we can,” she says.

That protection — in addition to the normal protocol of wearing a mask, washing hands, and standing six feet apart — requires visitors to visit the museum website to schedule a time slot, have temperatures taken upon arrival, sign in, and provide an email address.

“That’s so we can provide contract tracing, if worse comes to worse,” Perkes says.

While visitor requests are starting to come in — Perkes says upwards to 40 already registered for the weekend ahead — she says those who are still unsure about venturing out can view the exhibition online, a practice fine-tuned over the past several months.

Like many New Jersey cultural centers, the TCM was forced to close in mid-March. The closure ended the museum’s then current exhibition “If These Quilts Could Talk: A juried exhibit of the Prince­ton Sankofa Stitchers MQG and the Friendly Quilters of Bucks County.”

“When the museum was closed, the quilters left their art here,” Perkes says. “It was four months later when we were able to come back to the museum. The quilters never came back in. When the city allowed us in on a very restrictive basis we arranged time to remove the quilts.”

Despite a season of uncertainty, she says the museum committee members learned to adjust as they moved forward.

“It was pre-planned,” Perkes says. “We leave ourselves flexibility in case something unexpected presents itself, but generally we’re two years out.

“Everything was timed,” she says, adding that regionally known artist and curator Madeline Shellaby “had the courage to reopen the show.”

The exhibition involves 16 active regional artists whose work has been installed next to other works to encourage the viewer to “make connections and find similarities beyond differences,” writes Shellaby.

Perkes says her involvement with the museum occurred through a type of osmosis.

She says there were unexpected surprises.

That includes realizing “how quickly I became enamored with Trenton and the people I met. By coming here I learned what Trenton is all about — and it isn’t the buildings. The volunteers love the city’s history and the park. And there isn’t a person on the board who isn’t committed to the Trenton City Museum and what a treasure it is to the city.”

Another surprise was a recent revelation. “When I was working out our next show I realized that I had crossed the Atlantic and Pacific for art when I just could have crossed the Delaware River. I have found in New Jersey and the Trenton area an aesthetics I hadn’t found in Bucks County. If you’re dealing with a collector you always look for the new thing, and I think it stared in the most unlikely spot.”

Speaking more on her background, Perkes says, “I started in the gallery business. I was hired to run a gallery in Philadelphia. There was a second gallery in New Hope. That was in the late 1960s. When the galleries moved to the Laceworks in Lambertville, I moved to Bucks County.”

The formerly married director says, “After my daughter was born I decided that being in a gallery per se was to not what I wanted to do. I wanted to work with artists and took their work to art fairs and developed gallery and collector connections.”

Looking at her experiences, she says, “Being involved in the arts has tentacles that move out. I do appraisals and work with corporations. I’ve taken clients to Europe to collect. My life was completely enveloped by what I did in the art world. It was both a livelihood and deep passion that made me comfortable anywhere I had been.”

The South Philadelphia native of an Italian home keeper mother and Atlantic Richfield (ARCO) employee father says the initial seed for her art career was planted in grade school.

“I went to Catholic school, and every other Friday we had picture study and poetry and I thought that it would be in my future. The picture was about the study of the artist’s life, and we would analyze a painting.”

Then as a liberal arts student at Temple University, she took her first art history class and saw something that changed her life. “It was the cave paintings that made me think that I was going into the arts. I just had a visceral reaction. Something awakened in me. I can’t tell you what it was. I just said, ‘Oh my god. This is the most amazing thing I have ever seen. I want this in my life.’”

Her sophomore year in Italy, where she soaked up history and visited her mother’s hometown, convinced her that she was on the right track. “It helped me hone that sense that it was where I belong.”

Turning to the topic of art education, including art history, Perkes says that the museum is looking to connect with youth to help. “The arts are important to young people. Literature and music are lifesaving experiences. I firmly believe that we need to reach children — we can’t save everybody but we can save many.”

The arts’ ability to help people become critical problem solvers also seems to have given Perkes the ability to find some unexpected benefits of the pandemic. “I feel it’s a very creative moment. When we closed the museum I wrote a letter to the board members and said they should use it as a creative time and to think about where we’re going. It’s always important to look at a direction — you can modify it at any time — but you should look at where we’re going. I said it was a time to think about what we’re doing and come back renewed. When the world becomes dark, you have to reach for what makes it bright.

‘There is also a learning curve. With people hesitant to go to public spaces, our relationship with social media and websites is important. But there is always a learning curve to that — before this we never thought of virtual exhibitions. Now every exhibition we plan will have a virtual component. We’re doing catalogs on line. Interviews are in the works — everything we may have had for a show that was in the museum will have a component online.”

It also helped her focus on the ongoing challenges facing all cultural organizations. “It’s how to be relevant,” she says, “How to examine our place in the community and do it better. As times change, we need to keep a dialogue open.”

She says she and the board are also “looking for fun things that engage people.” That includes the upcoming series of exhibitions, including the December 5 show tentatively called “Women Trenton Style” and an upcoming anniversary.

She says as they move towards that anniversary, TMS “received a three-year capacity building grant from the PACF’s Bunbury Fund,” something that “comes at a crucial time as the Trenton Museum Society is aggressively working to embrace and meet the challenges and its position in a changing world.”

Perkes shares several thoughts on the formula for her long career in the arts — one that now combines her own clients and her volunteer work at TCM.

“The magical thing about being involved in the arts is that it makes you a citizen of the world. There isn’t a place you go that you don’t always feel at home. That’s something I learned early on. I don’t know if I found the arts or the arts found me.”

Another is the opportunity to be creative. “Since I don’t paint and don’t write, my creative expression is how to piece things together. I look at a project as an empty canvas where something is waiting to be created. That’s how I think about everything — like my life. I never know where something will take me. I am tuned to unexpected encounters.”

But the third is more direct. “I love people. I love talking to them. I love hearing their ideas. There is such a source of information that I love to reach out. I just plain love people. I don’t know how to explain it,” she says — definitely smiling through her mask.