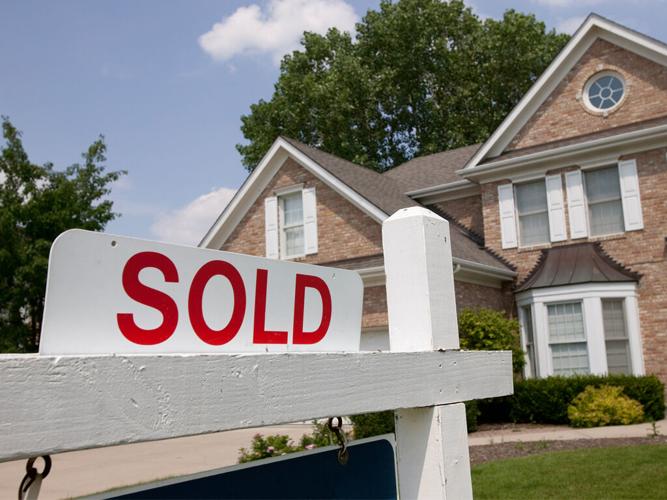 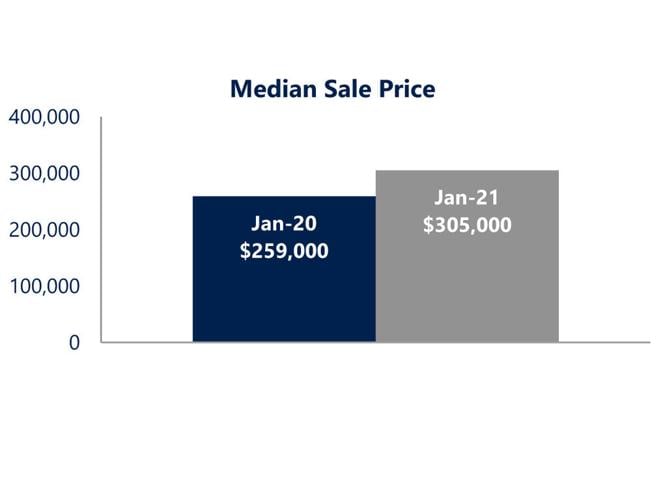 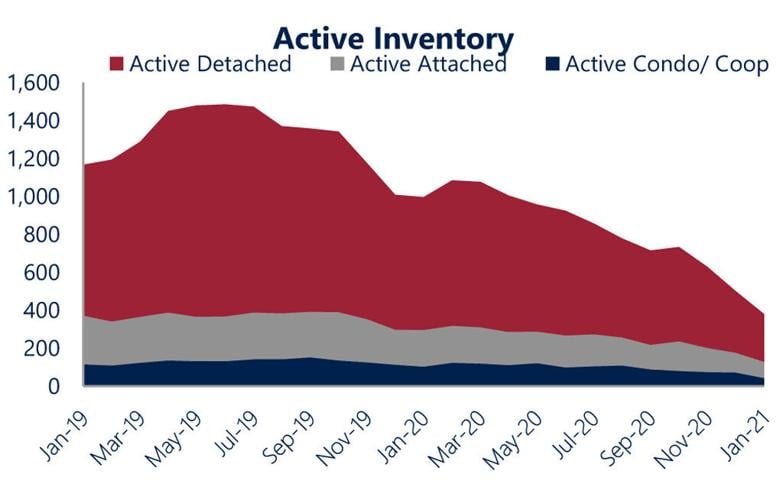 The above image from a Long & Foster report shows the significant decrease in housing inventory in Mercer County over the last two years.

For those looking to sell their home, now is as good a time as it has been in many years. For buyers, though, it’s a different story.

Prices are up and inventory is down—that’s the state of residential real estate in New Jersey’s capital region during the first months of 2021, according to reports by real estate companies and several Mercer County real estate professionals interviewed by the Hopewell Express.

Lisa LeRay, vice president of the Mercer County Top Producers Association, said that when things started shutting down due to the pandemic last March and April, it definitely put a stop on the real estate market.

Things began to change a few months later. “When June came around and things were opening up again, the market took off like wildfire,” she said. “The buyers were determined to still buy, especially being that rates were at an all time low.”

But sellers weren’t quite ready to put their homes on the market.

Donna Lucarelli, an agent with Keller Williams Real Estate-Princeton said she has seen inventory drop “tremendously” through 2020 and into the new year.

“The law of supply and demand holds true,” said Lucarelli, who specializes in real estate in the West Windsor area. “Less houses, high buyer demand. The prices of West Windsor homes have soared to great heights. Prices are better than 2005. The current market is a seller’s market. Right now, it takes one weekend to sell a house in West Windsor, if the price is right.”

According to Lucarelli, buyers are coming from New York City and want homes with land and a spacious home for their family, adding that her listings have sold for full price, and some have sold for up to $30,000 over the asking price.

“Despite the fact that we’re at least 6-8 weeks ahead of what is typically the peak time of year for home sales, there are many qualified buyers seriously seeking homes to purchase,” she said, adding that there are also many more motivated sellers than usual. “Well-priced homes with compelling features and in good condition sell quickly—often receiving multiple offers.”

A 2020 year-end report by Callaway Henderson states: “In our communities and across the country, the impacts of COVID-19 brought a particular focus on the benefits of home—what it means to each of us and how the notion has been forever redefined.

“Some experienced a renewed appreciation for the home they already had; others craved immediate change; and still more anticipated the need for a move in the near future.”

The lack of inventory, which was at historical low levels last year, made even that market feel busier, said the report. There was a 114% surge in buyers from New York and Philadelphia since 2019, and they found homes in lower-priced local markets, such as Lawrence and Hopewell townships.

“Even though inventory was down, the number of contracts increased dramatically—so much so that average sales prices in those municipalities skyrocketed as well,” the report said.

The buyers were able to find homes in those communities priced between 40 and 60% lower than Princeton, where the average sale price was $1.04 million.

The market for homes at the higher end of the price range was slow throughout most of the year, but picked up in the fourth quarter. That continued into January, said the report. “In fact, there have been more $2 million-plus contracts this December and January than during any other such time in Mercer County’s history.”

A Mercer County market report for January 2021 released last month by Long and Foster shows the trends from 2020 continuing into the new year. There were a total of 295 units sold in January, which was an increase of 8% versus January 2020, the report said.

In January, there was 1.3 months of supply available in Mercer County, compared to 3.7 in January 2020—a decrease of 65% versus a year ago, according to the report. Months of supply is calculated by dividing current inventory by current sales. It indicates how many months would be needed to sell all of the inventory available at the current rate of demand.

The report also shows that overall, Mercer County homes spent significantly less time on the market and sold for more in January. The average sale price was 98.7% of the average list price, which is 1.9% higher than 2020. Meanwhile, the average number of days on market was 41, lower than the average last year, which was 70, a decrease of 41%.

Both the Long & Foster and Callaway Henderson reports give market information broken down for a select number of communities.

According to Long and Foster, 74 homes sold in the Princeton, Pennington and Northern Mercer County market during January, an increase of 16% versus January 2020.

Inventory is down significantly. The total number of units for sale in January was 174, as compared to 354 in January 2020, a decrease of 51%.

The number of months of supply was down 57%. It decreased from 5.5 months in January 2020 to 2.4 months during the first month of this year. In January, the average number of days on market was 71, lower than the average last year, which was 99, a decrease of 28%.

For Hamilton Township, Long and Foster reported that a total of 34 homes were sold in January, which is an increase over January 2020. The total number of homes on the market during the first month of 2021 was 21, as opposed to 72 in January 2020—a decrease of 71%.

In January, there was a .6 month supply available in Hamilton, compared to 3.1 in January 2020—a decrease of 80% versus a year ago.

According to Long and Foster, 19 homes sold in the Robbinsville market during January, an increase of 27% versus January 2020.

Inventory is down significantly. The total number of units for sale in January was 13, as compared to 50 in January 2020, a decrease of 41%.

The number of months of supply was way down—79%. It decreased from 3.3 months in January 2020 to .7 months during the first month of this year. In January, the average number of days on market was 62, slightly higher than the average last year, which was 62, an decrease of 17%.

For Lawrence Township, Long and Foster reported that a total of 16 homes were sold in January, which is a decrease over January 2020. The total number of homes on the market during the first month of 2021 was 30, as opposed to 92 last year—a decrease of 67%.

In January, the average sale price in Lawrence was 99.6% of the average list price, which is 3% higher than at this time last year, and the average number of days on market was 27, lower than the 2020 average of 49—a 45% decrease.

According to market insights from real estate site Redfin, the current average home price in Ewing is $260,000, which is an increase of 36.8 %over last year. The average home is selling for about 1% over list price. Callaway Henderson and Long and Foster did not provide any market information for Ewing.

According to Long and Foster, 20 homes sold in the West Windsor market during January, an increase of 18% versus January 2020.

Inventory is down significantly. The total number of units for sale in January was 18, as compared to 46 in January 2020, a decrease of 31%.

The number of months of supply was down 67%. It decreased from 2.7 months in January 2020 to 2.7 months during the first month of this year. In January, the average number of days on market was 45, lower than the average last year, which was 78, a decrease of 42%.

Cecila, Leray and Lucarelli all believe that the market will continue to be strong moving into the rest of 20212.

Cecila said she expects that the pandemic will continue to have a lasting impact on the local market this year. She said that in addition to the surge in home purchases last year, there was also a corresponding exponential increase in rentals.

Cecila believes when those leases end this year, “a healthy percentage” of those renters will be looking to buy a home, further contributing to buyer demand. “Historically low interest rates will continue to make home ownership appealing, and will keep home prices more affordable than might otherwise be the case with the increase in prices that are resulting from low inventory and competitive bidding situations.”

She said that improved health conditions, the increased availability of vaccines, and the loosening pandemic-related restrictions should all serve to make sellers more comfortable putting their homes on the market and making a move. This will help to increase inventory.

“I see it remaining a good year, but as people lose their jobs, and mortgage companies need to foreclose on their houses, it will turn to a buyers market,” Lucarelli said. “Prices will start to come down and be more realistic.”

LeRay said that she anticipates the inventory of homes on the market to increase once the nicer weather comes and more and more people become vaccinated against COVID-19.

“It is expected that rates will stay low and if we get some inventory this Spring, it should level off to a healthy balance,” she said. “The scramble for city folks to move is still prevalent. With the ability to work remotely, being close to the trains and/or Pennsylvania and New York is not as big a necessity to many buyers.”

Cecila said that the pandemic has prioritized and redefined the meaning of home. “Shelter-in-place requirements, ongoing social distancing, working from home and remote schooling have all resulted in home taking on even more significance than ever and needing to serve multiple purposes that perhaps historically hadn’t been high priorities.”

A common theme among buyers has been the desire for more space and more room to spread out—both inside and out. Cecila said the most frequently asked for wishlist items include: home offices; home gyms; home theaters; and larger backyards with swimming pools, sports courts and other outdoor entertaining amenities.

Lucarelli said that homes with an office, or space for an office, is a big advantage now that more and more people are working from home. She added that in many cases, families use an extra bedroom as an office.

“Finished basements are also an added value,” she said. “They always were according to appraisal value. There is more living space there, or it can be used as an office.”