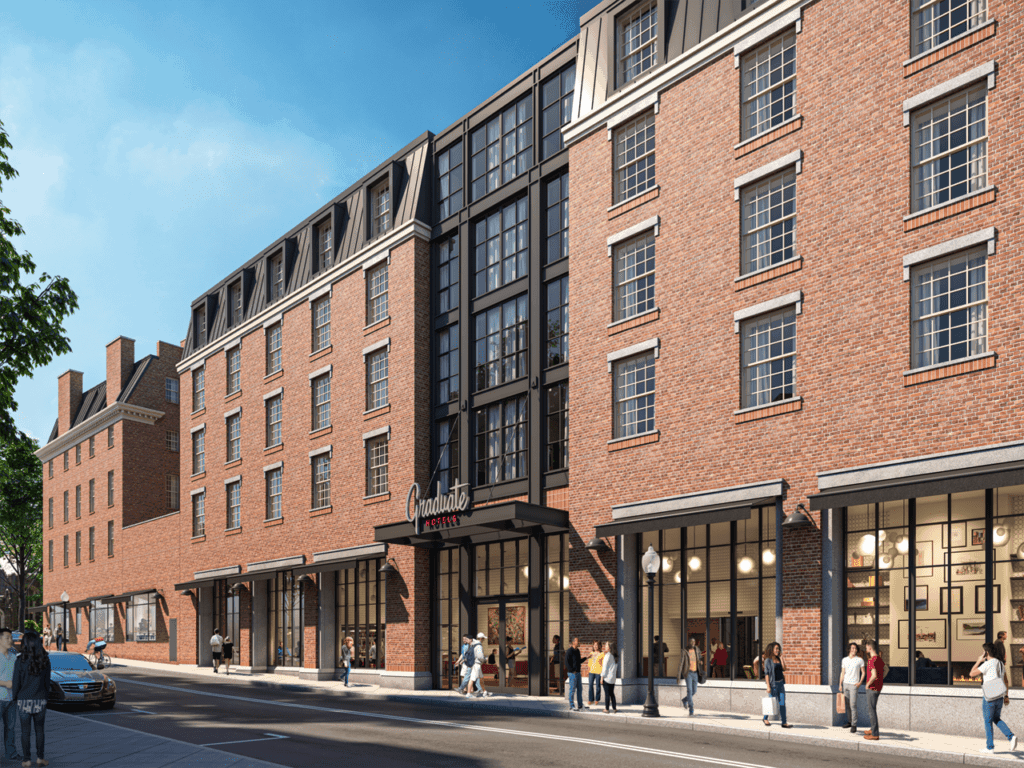 Plans for Princeton’s Graduate Hotel entail a new five-story structure along Chambers Street, where the hotel’s main entrance and lobby would be located. The historic facade of 20 Nassau Street would remain largely unchanged. 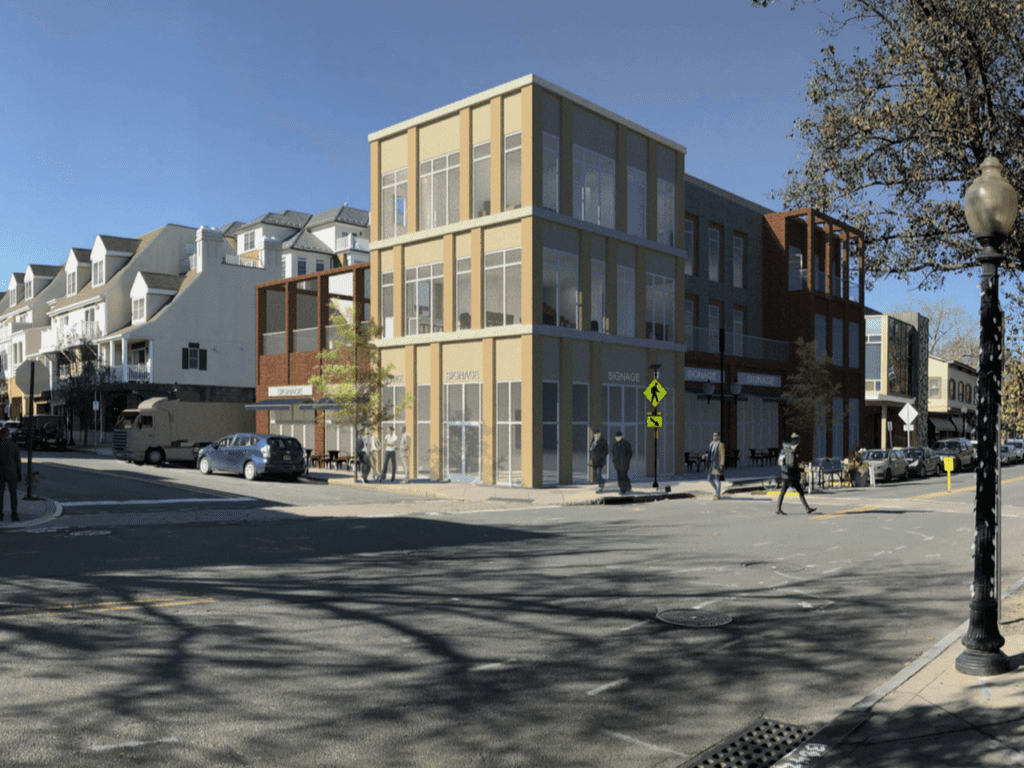 An artist’s rendering of the proposed new building at the corner of Witherspoon and Hulfish Streets in Princeton. (Click to enlarge.)

The public was given its first glimpse of plans for the historic 20 Nassau St. office building at the Aug. 12 meeting of Princeton’s Site Plan Review Advisory Board.

The existing five-story building was constructed in 1918 and has retail stores and restaurants, including Morning Glory and Jammin’ Crepes, on the ground floor, with office space above. Plans also include the adjacent building around the corner at 2-4 Chambers St.

The buildings were acquired last year by Graduate Hotels, which has 30 boutique hotels across the United States. Anew hotel in downtown Princeton would provide a welcome addition for travelers who have to look to Route 1 for hotel options other than the Nassau Inn.

In their presentation to SPRAB, Graduate representatives emphasized their intent to maintain the historically and architecturally significant Nassau Street facade. The building originally served as a Princeton University dormitory and then as an early headquarters for Educational Testing Services before transitioning to its current use. The proposal would maintain the existing ground floor retail and restaurant tenants.

With the ground-level tenants on Chambers Street closed or moved out, plans call for the demolition of those buildings, to be replaced by a five-story structure matching the Nassau Street-facing portion of the property.

The main entrance to the hotel lobby, along with its restaurant and bar, would be along Chambers Street. The proposal also calls for an 80-car below-ground parking garage beneath the property. Environmental measures are also incorporated into the plan, including a green roof and compliance with LEED Silver standards.

The Princeton Planning Board has begun hearing a proposal from Palmer Square Management to transform the 24-space metered parking lot at the corner of Witherspoon and Hulfish streets into a mixed-use building featuring ground-floor retail space and seven residential rental units on the second and third floors.

Until 1963, the site housed the Griggs Imperial Restaurant. That was replaced by a gas station, which stood there until 1987. The current proposal requires no zoning variances.

At the July 23 Planning Board meeting Municipal Planner Michael LaPlace noted that the project made sense from a planning standpoint. “We feel this is a smart-growth appropriate project for this site … It will better define Hinds Plaza by having sort of a more defined street wall across Witherspoon Street. Right now the space sort of floods out because it’s just a surface parking lot. We think that’s a nice urban design feature of the project.”

The proposed building, designed by architect Joshua Zinder, would have 5,467 square feet of first floor commercial space and a 5,308-square-foot basement. The seven residences would consist of three three-bedroom duplexes, three two-bedroom duplexes, and a flat that would fulfill the site’s affordable housing obligation.

‘The site would also have a 2,353-square-foot courtyard. There would be no on-site parking; instead spaces would be set aside for residents in the Hulfish Street garage.

A prime area of concern among members of the planning board is the intention to have only a five-foot-wide alleyway separating the building’s northern side from the adjacent Mistral restaurant. While Zinder noted there is precedent for alleyway restaurant access — citing the Alchemist & Barrister — it was set to be a topic of further discussion.

A continuation of the hearing scheduled for Aug. 6, however, was postponed due to power outages from tropical storm Isaias.