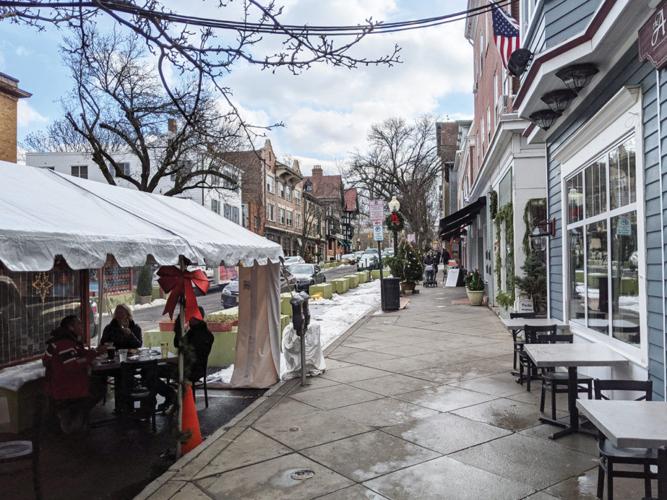 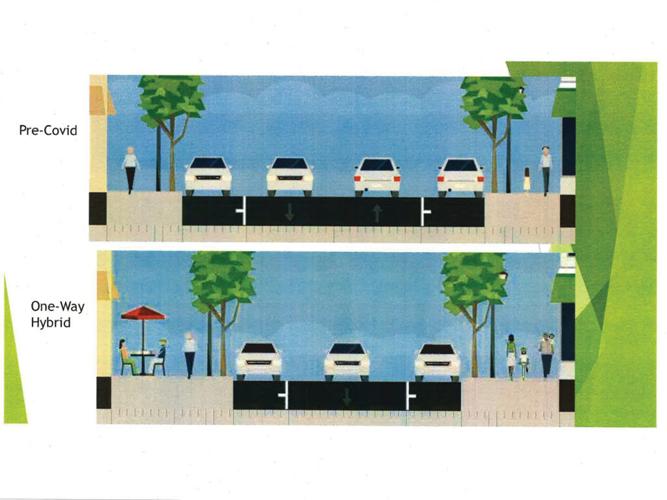 The current setup of Witherspoon Street, top, will be replaced by a one-way roadway with parking on either side and increased space for pedestrians.

What started as a pandemic-induced solution for outdoor dining is on its way to becoming a permanent feature of Princeton’s downtown landscape, as Council voted unanimously on December 21 to make Witherspoon Street a one-way road from Nassau Street to Spring Street.

The decision followed months of meetings, consultation with the community, and professional traffic studies and was not made without vocal opposition from some merchants and residents.

At the December 7 Council meeting, when the ordinance was introduced, municipal engineer Deanna Stockton explained the town’s goals in pursuing the project. “We were really looking at, what can we do to preserve and enhance this main economic area of downtown Princeton while preserving what’s good about it and then finding healthy, safe, and equitable improvements that can benefit the entire community?”

What became clear, she said, is that “some sort of a major shift of resource allocation was needed so that it wasn’t overly skewed for motor vehicle travel and parking.”

“We understand that traffic volumes and traffic patterns are nowhere near the pre-COVID conditions,” she added. “But it gave us an opportunity — and for the public to have an opportunity — to see another view of Witherspoon Street.”

The conclusion, reached in consultation with transportation engineering firm McMahon Associates, which conducted the traffic study, was to pursue so-called “alternative B,” which is roughly the setup that has existed since spring, with one-way traffic northbound from Nassau Street, with parking spaces on either side.

The approval of the ordinance is the first step in a lengthy process that involves extensive coordination with the state Department of Transportation. The permitting process to allow the permanent change to a one-way roadway is expected to take nine to twelve months. The ordinance also does not define the placement of crosswalks, permanent outdoor dining setups, landscaping elements, and other design features that will have to be developed for the new road configuration.

“We are excited by opportunities to design the roadway in a flexible way so that as our density changes, as transportation modes change, we have the ability to adapt this roadway,” Stockton said at the December 7 meeting.

Additionally, the state is simultaneously working on plans to replace the traffic signal at the intersection of Nassau and Witherspoon streets. It has long been targeted by the municipality as an ideal location for an exclusive pedestrian phase, but the equipment currently in place is too old to handle the timing sequence necessary for that. Also incorporated into the state’s planning is a request from a visually impaired resident for upgrades to the intersection.

A primary concern of residents who opposed the ordinance was the potential for increased traffic to be funneled onto Vandeventer Avenue and Chambers Street. Several commenters at the council meeting noted that a projected eight-minute maximum wait time for vehicles to navigate the Vandeventer/Nassau intersection at rush hour did not seem to match with the reality they regularly witness from their front porches.

Other changes are being considered to alleviate potential congestion at that intersection, including a reduction of the exclusive pedestrian phase from 42 seconds to 34 to 38 seconds and the conversion of South Tulane Street to one-way southbound, though left turns at Nassau Street would be prohibited due to visibility issues.

Other regulations to be considered will include designated times for businesses to receive deliveries and for garbage removal. In a letter to the editor printed in several area publications, Alchemist & Barrister owner Frank Armenante, joined by multiple stakeholders in Witherspoon Street business es, noted: “We would like to see a flexible street that allows access to personal cars, delivery, and service vehicles at set times, but also allows for enjoyable closure at other times, to make a safe outdoor space for people, for meeting, dining, and for community building.”

Merchants noted that while the COVID setup has been a lifesaver for full-service restaurants, the change has not been positive for retail and quick-service businesses. At the December 7 meeting Andrew Siegel of Hamilton Jewelers noted, “the current one-way setup has actually been decidedly unsuccessful for our retail and quick service friends. We all agreed to it temporarily in the interest of helping our full service restaurant neighbors on the street during COVID.”

This sentiment was echoed by David Newton, the landlord for the Hamilton Jewelers building at 92 Nassau Street as well as for 16 Chambers Street, during the public hearing on the ordinance at the December 21 meeting.

“We’re living in a time of terrible vacancy in the retail business. One of the great assets we need to hold onto is our retailers, and these retailers are living in appalling, stressed conditions at the moment,” he said. “This town feels, and I’m not quite sure why, the need to create a very significant change to the traffic system at a time when people are just reeling in terms of their business … or at least those businesses that still remain.”

But other residents, including many who said they would have preferred the street become an all-pedestrian plaza, argued that a more inviting Witherspoon Street would help restaurants and retailers alike. More than 1,100 people signed a Change.org petition started by resident Brian Levinson, which stated “With this redesign, we are more likely than ever to spend time in and around Witherspoon — dining, shopping, and gathering with friends and family. Many other locations have shown that people-friendly streets are good for business.”

One signer, Sam Bunting, spoke at the December 21 hearing. “I think one of the things that those of us who signed the petition really strongly believe is that if you can create more pedestrian space on Witherspoon Street it’s going to make us feel more inclined to spend more time on Witherspoon Street, more time patronizing those businesses, which we already love, and we’d like to spend more time there,” he said.

“The unique selling point of Prince­ton is its sense of place, and to the extent that we can maximize and optimize the ability of people to enjoy that space, that is going to attract more people into the downtown and helps to resolve some of these vacancies that we’re seeing. The assumption that the vacancies problem is going to be solved by constantly squishing as many cars as we can into the center of our town — it just doesn’t seem right to me.”