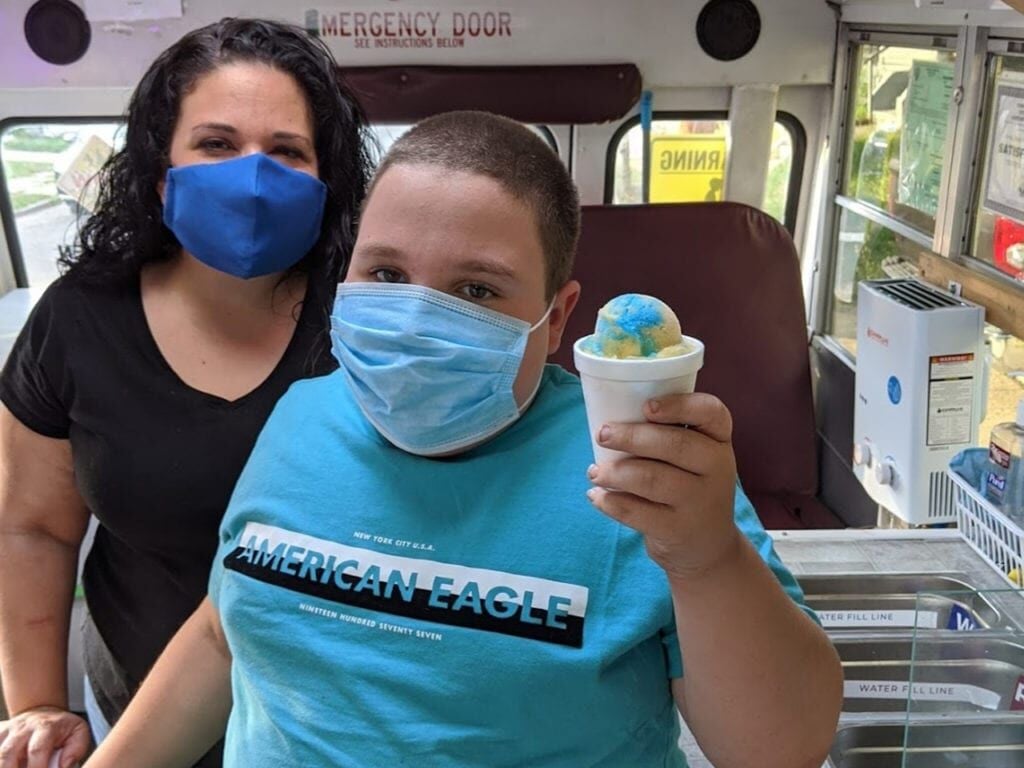 Lucas Ratliff, right, with mom Michelle on the Chill Out Italian Ice truck. 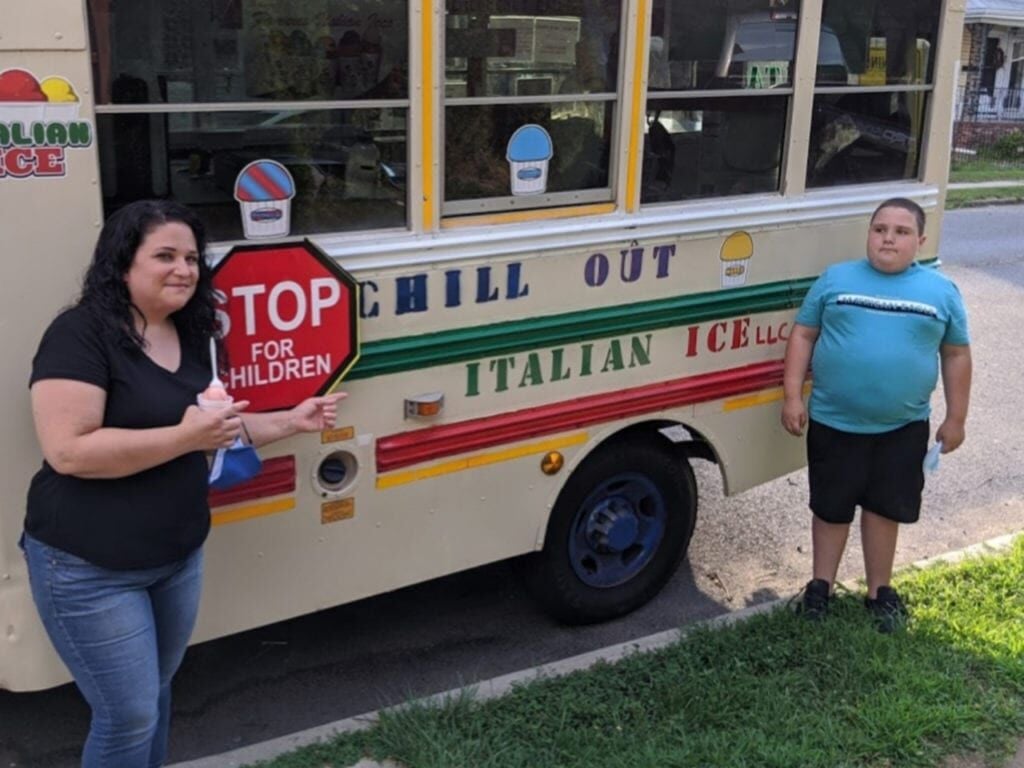 Michelle and Lucas Ratliff with the Chill Out Italian Ice truck — a converted minibus.

Lucas Ratliff and his father Don were sitting by the campfire in Otter Lake one night last September when Lucas said he was thinking of ways to earn some money.

Maybe I’ll start up an ice cream truck, he said. Lucas had some $5,000 saved up to invest. Then he said, well, there are so many ice cream trucks — maybe an Italian ice truck instead. After all, Don had driven a Super Cool Italian Ice truck around in the New Brunswick area when he was younger.

But Lucas is a driven young man who was on the way to starting up his new business, Chill Out Italian Ice LLC. Since April, Chill Out has been on the roads of Hamilton, serving mobile frozen treats to neighborhoods all over town. And which, perhaps one day soon, will be expanding operations throughout the region, thanks to its energetic founder.

And despite his young age, he has been the true driving force behind the business, Don says.

“For an 11-year-old, he’s very advanced in everything going on in the business,” he says. “Everything from inventory to gas on the truck, he’s very involved in what’s going on.”

Which is not to say that Lucas doesn’t have plenty of support. Everyone in the family is involved in some way. Mom Michelle is Lucas’ co-owner in the business, and brother Brad, 24, helps out in the truck, serving Italian ices and cleaning the freezers. Brother Jordan, 21, does a lot of the driving. And Don says he helps out with general operations as well.

“His mom and I, we basically just make sure everything is legal for him and hand it over to him,” Don says. “I’m sure if he could drive, he’d be operating his own truck by himself.”

The $5,000, Don says, Lucas had saved up over the years: birthday money, Christmas money, earnings from doing chores around the house. And he found his love for the culinary arts at a surprisingly young age, fueled in part by his love for competitive kids’ cooking shows that he likes to watch on TV.

“He’s not the average kid,” says Don, 42, of his son. “He’s been into culinary stuff — more on the baking side — since the age of 2. He’s always baking. When it comes to Christmas gifts, he doesn’t want games and toys, he wants baking supplies. He’s always baking cakes for his teachers at school, cupcakes, you name it, he’s baking it for them.”

The Chill Out truck is actually a converted minibus. Don says Lucas made the decision to go with a bus, figuring it would be distinctive and more fun than a traditional ice cream truck.

“Lucas did all of his research,” Don says. “He went onto my Facebook account, he found a school bus within his reasonable price, he showed me what he had. He talked to the gentleman who had the bus, he spent $1,200 and he bought the bus.”

To turn it into an Italian ice truck, the Ratliffs gave it a deep clean and took out all the seats. They installed the equipment necessary for the operation of the truck, including water tanks, discharge tanks and freezer units. Lucas first bought some used freezers, then, when he was dissatisfied with those, replaced them with some brand new freezers.

Lucas, a Kuser Elementary School graduate who will attend Reynolds in the fall, was also the taste tester who decided which brand of Italian ice to serve. Don says he tried 50 different companies before choosing Famous Italian Ices out of Philadelphia.

Within a few years Lucas would like to start making his own ice, but to get the business started he decided to go with a proven brand.

Don says they had just about got the truck ready to roll when the pandemic caused statewide lockdowns. But he says Lucas never got discouraged.

“He just kept moving forward with everything he was doing. He was always focused on what his goal was with this,” he says.

They had an agreement with a commissary kitchen and all the permits they needed to operate. But because of the pandemic, they thought they might have to table their plans until next year. Then they got a call from Hamilton Township asking if they were planning to get started any time soon.

“I was like, ‘Are you going to allow me to do this?’ and they were like, ‘Yeah, we feel it’ll be safer you going door to door than people going out to a restaurant to sit down.’ So we had a week to find Lysol wipes and get out on the road,” Don says.

And since April, the Chill Out truck has been out on the road Wednesdays through Sundays in various Hamilton neighborhoods. Mondays and Tuesdays are for sanitizing the truck and getting it restocked.

They usually leave home base around 3 p.m. and drive around until 8 or 8:30, later on weekends. They also do special events, including a lot of birthday celebrations. On any given day they offer some 20 or 30 flavors of Italian ice, plus soda, water and soft pretzels.

Social media has been the main way of getting the word out. Especially in the early going, whenever someone would request that they visit a certain street, they would make every effort to get there.

“We learned that Hamilton is so huge, we were spending three hours a day just going to requested streets,” Don says. Now for the most part they set out on a route and let people know where they will be. They still accommodate social media requests when possible.

Things have gone so well that Lucas has already purchased a second vehicle — a van this time — and has been busy making it roadworthy.

“He’s always been that kid to be on top of things. In school he’s very well respected by the teachers, he’s never in trouble,” Don says. “I came downstairs the other night and he’s on the computer, ordering ice. The other night, he was doing the quarterly sales tax stuff.”

Don, originally from Highland Park, worked as a truck driver before a back injury made him unable to work. When Michelle, originally from Edison, is not helping her son with his truck, she is head accounting clerk for facilities at Rutgers University. The family lives in Hamilton in the area between Hamilton Avenue and Liberty Street.

Don says Lucas eventually wants to be a baker, and his ultimate dream is to own his own food establishment with a heavy emphasis on baked goods. “He’s constantly writing down new recipes, and now he’s trying to find ways to incorporate Italian ice into baking,” Don says.