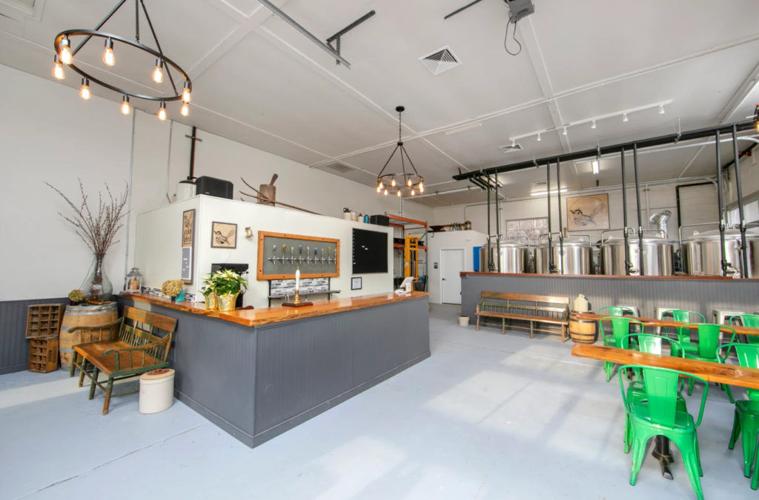 Odd Bird Brewing is located in a converted automotive garage in Stockton. (Photo by Jesse Darlington.) 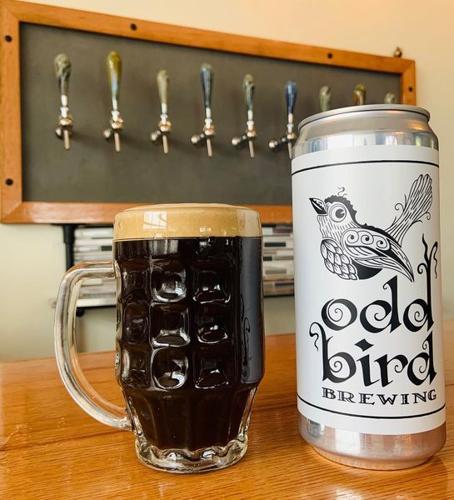 Warm weather is on its way and, we can all hope, better times are coming with it.

After spending a year beset by the coronavirus pandemic, everyone is looking forward to getting out and feeling not weird at all about enjoying their favorite leisure activities.

Like say taking a sunny spring walk along the towpath of the Delaware and Raritan Canal, or maybe popping into a brewery that just happens to be across the street from the path.

Adam Juncosa and Karen Malzone of Odd Bird Brewing will be hoping that 2021 offers the co-owner couple a chance to operate their business the way they have long dreamed of doing.

They opened Odd Bird in late January 2020 in Stockton, the sleepy river borough some four miles north of Lambertville. The brewery is situated in the old Stockton Eagle gas station, where Juncosa and Malzone spent months converting the garage into their vision of a brewhouse and taproom.

They started out with a fun slate of beers on tap, including their Catbird IPA as well as a pale ale, a Berliner weisse and Extra Stockton Bitter, Odd Bird’s English-style pub ale.

The response from the local beer-drinking community was immediate, positive and strong upon opening — and then, of course, the pandemic hit. Like many businesses, Odd Bird shut down for a few weeks while Juncosa and Malzone figured out what came next.

They reopened in April for to-go beer sales, and then in the summer, once the state gave the green light, they set up a tent in the side parking lot where socially distanced customers could sit, widely spaced and four to a table. They kept the tent up until right before Thanksgiving, when cold and wind made it difficult to keep it up.

The tent worked out well. “We had the ‘seating full’ sign up more often than not through the fall,” Juncosa says. “If we were going to have people drinking in a gas station parking lot we didn’t want it to feel like they were at a tailgate. We wanted them to feel like they were inside a beer garden. We put some astroturf down and spent a lot of time making sure our brewery was a safe and comfortable place.”

After Thanksgiving, Odd Bird went back to to-go only sales, but the plan is to reopen the tent in early April and then see what comes next in terms of opening the taproom back up to customers.

The couple used their own resources to start up the business, and count themselves as the company’s only employees. Malzone still teaches full time in addition to working at the brewery.

Juncosa was a homebrewer for more than a decade before he and Malzone decided to start their business together. Over that time he brewed many different styles of beer, but frequently found himself preferring classic European brews — styles like Kölsch and smoked helles lager, from Germany, and bitters and oatmeal stouts the likes of which are popular in England.

“I just love classic styles,” says Juncosa, a native of Poughkeepsie who now lives with Malzone in Stockton, within walking distance of their brewery. “I love the stories behind them. I love the fact that in Germany, you go to a town like Cologne, that’s known for Kölsch, and every brewery makes Kölsch.”

Over the years, Juncosa has spent a lot of time looking for primary-source recipes for his beers and tweaking the recipes to get the flavor he is looking for. When friends traveled overseas, he would ask them to try to bring him back fresh Kölsch or pilsners that he could try to help make his own interpretations of the style hit the mark.

Juncosa is a big fan of cask conditioned ales, and has a hand pump at the brewery that is used to serve the traditional English-style ales. Cask-conditioned beer does not travel well, so Odd Bird only offers it when sit-down service is possible.

But Juncosa has spent the winter building up a stack of casks that he’s looking forward to serving. Mumbletypeg and Extra Stockton Bitter are set to be among the first cask ales on tap when onsite consumption resumes.

In a time when many breweries are increasing the alcohol content by volume, Odd Bird has bucked the trend by offering many beers in the 4 to 6% ABV range. Juncosa says that while Catbird IPA is the brewery’s best-selling brew overall, the lower-ABV beers more than hold their own in terms of popularity.

That does not mean that Juncosa doesn’t appreciate a big bold beer. He recently brewed up a 10.5% ABV Belgian-style ale to mark the anniversary of the brewery’s opening. He and Malzone named it One Odd Year, in recognition of the unusual circumstances of their first year in business.

He and Malzone look forward to welcoming customers back to the brewery they have worked so long and hard to build.

Odd Bird Brewing Company, 10 Risler St., Stockton NJ 08559. Email: adam@oddbirdbrewing.com. All beers, as well as Odd Bird merchandise, can be ordered ahead for pickup from the Odd Bird website, oddbirdbrewing.com. See website for hours of operation and details about visiting the brewery.