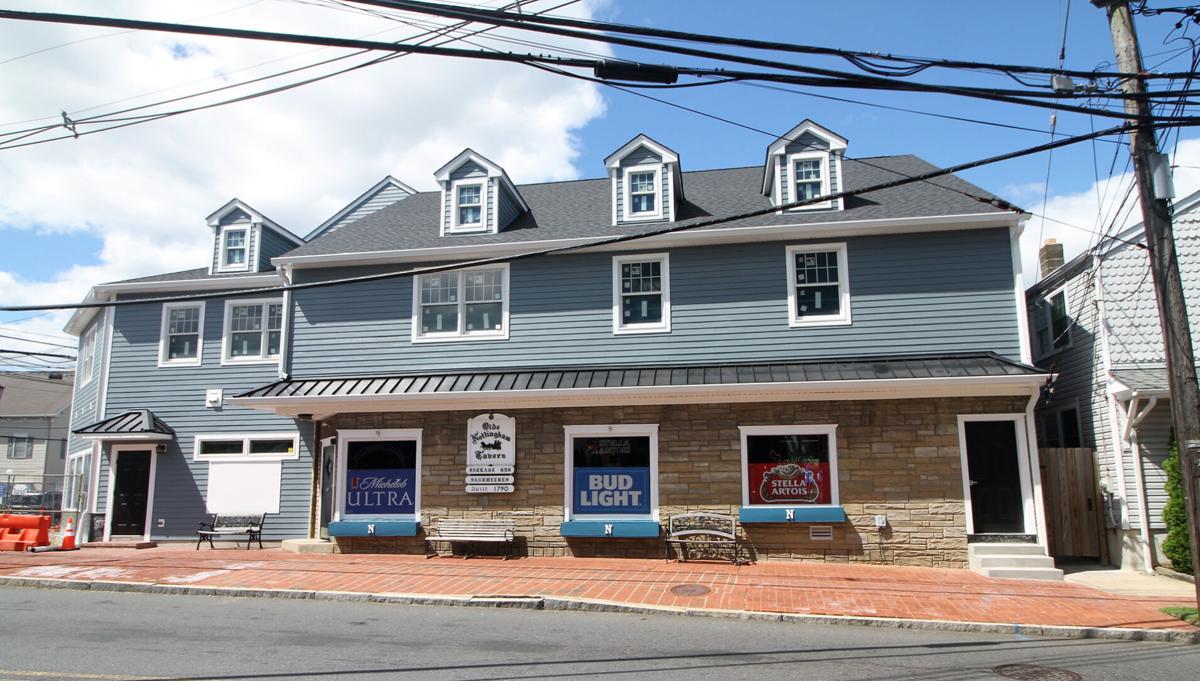 The newly renovated exterior of the Nottingham Tavern, the 18th-century restaurant in Hamilton Square now owned by Gerry Brady. (Photo by Thomas Kelly.) 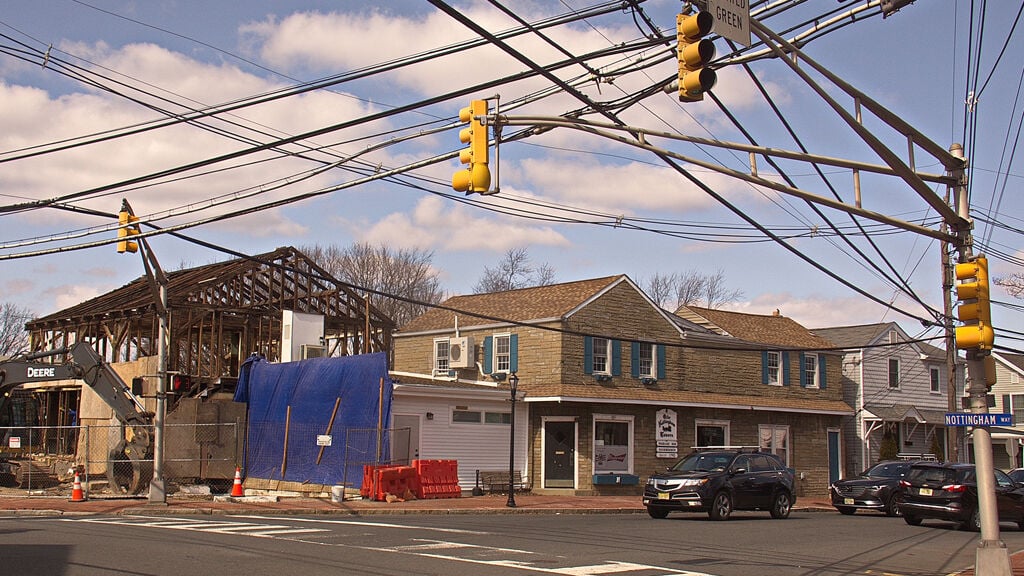 The Nottingham Tavern in Hamilton Square prior to its recent renovation. (Photo by Kevin Stout Photography.) 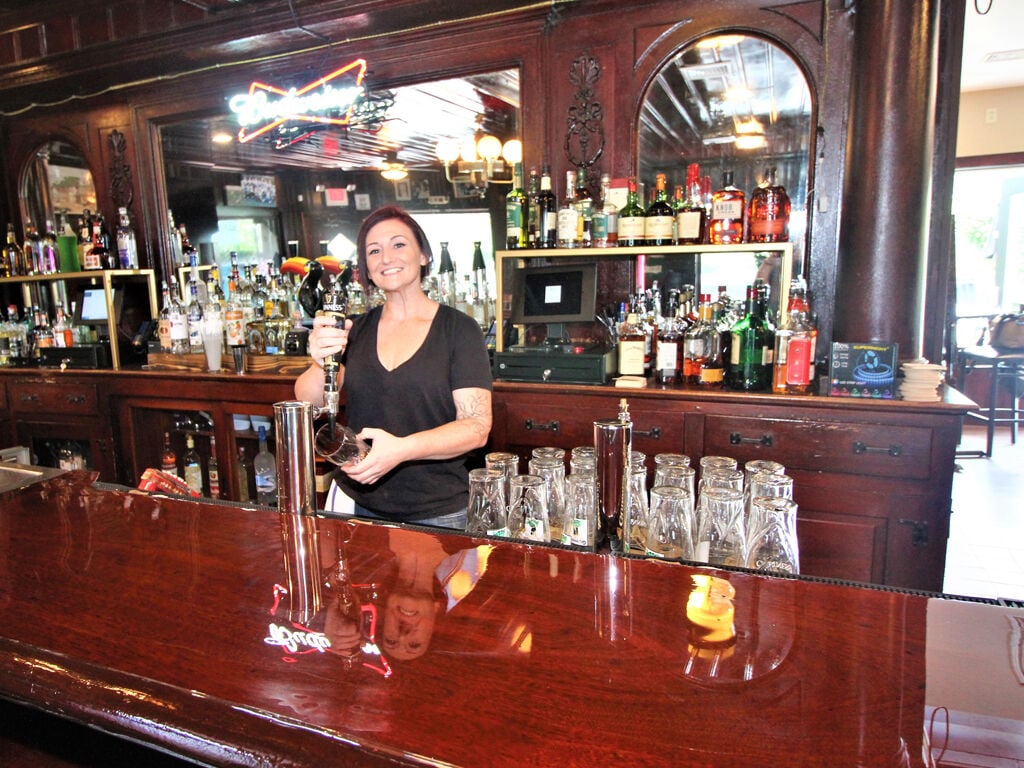 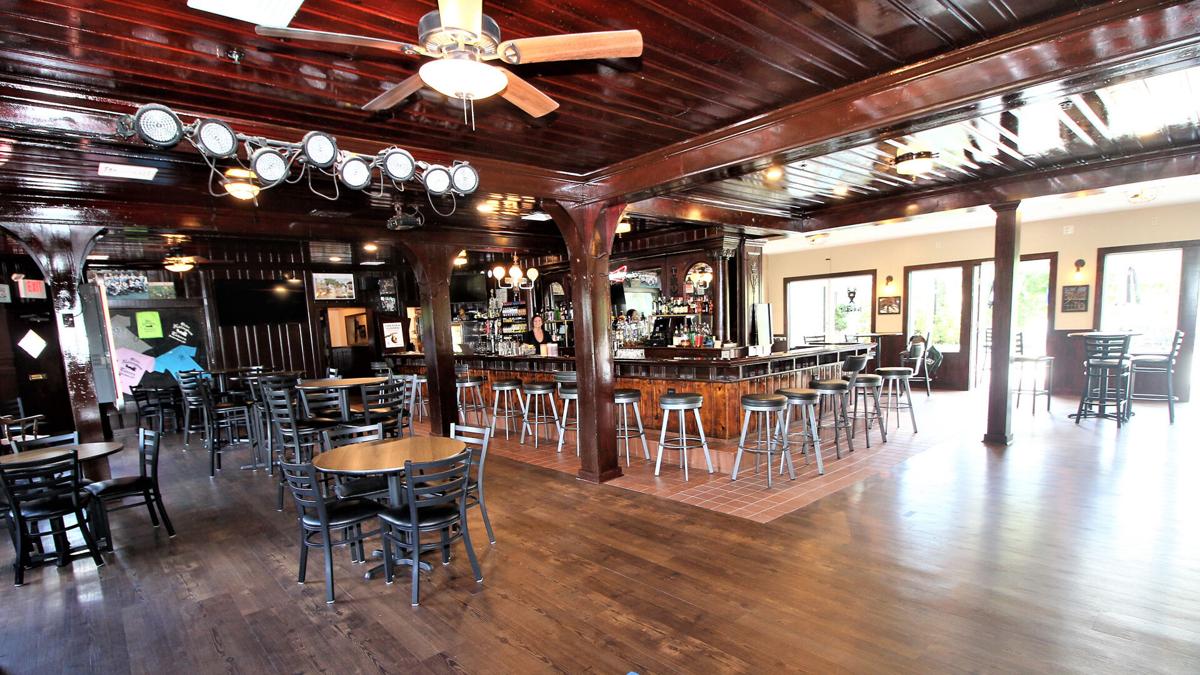 The renovated interior of the Nottingham Tavern in Hamilton Square. (Photo by Thomas Kelly.) 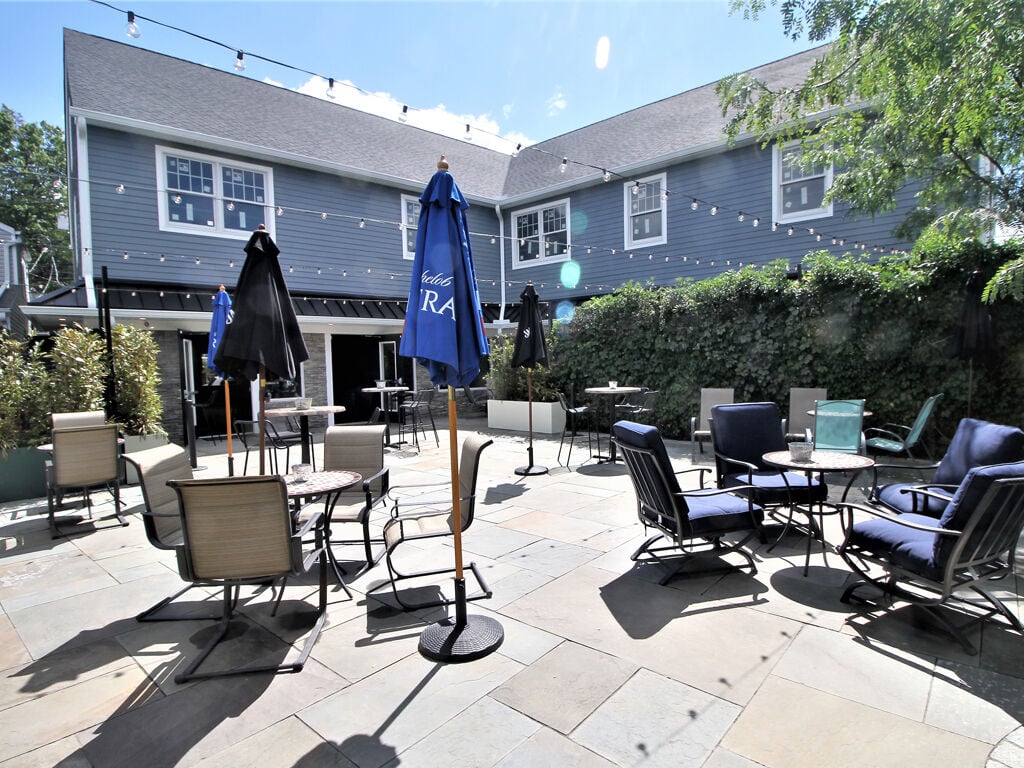 The new patio at the Nottingham Tavern in Hamilton Square. (Photo by Thomas Kelly.) 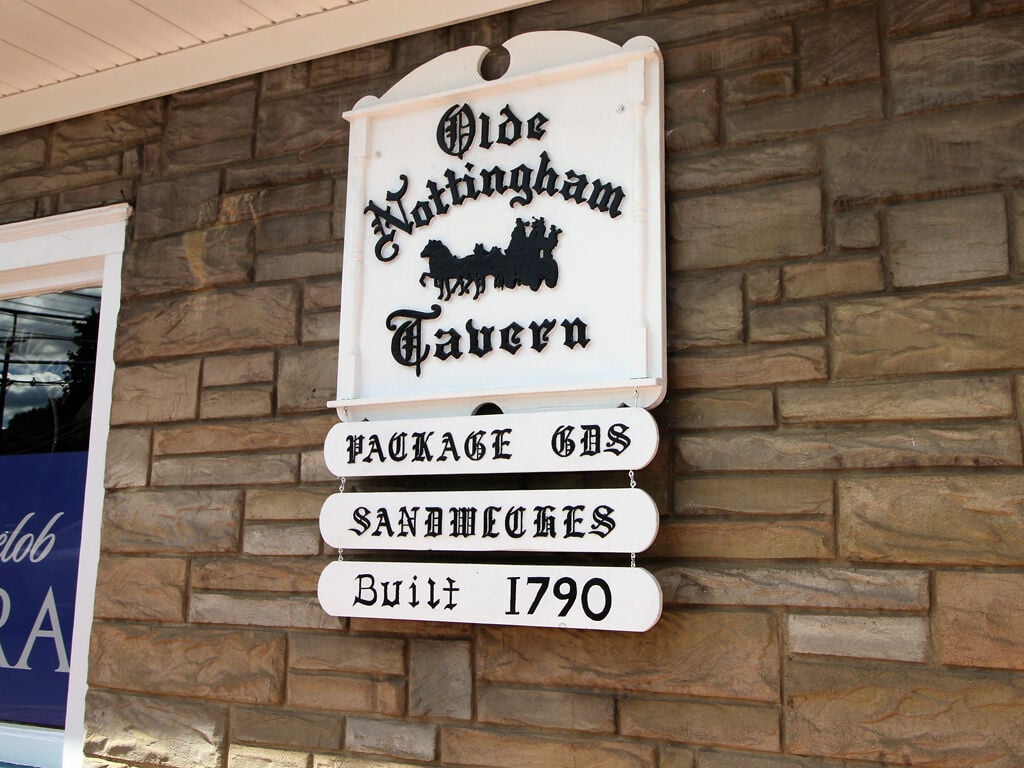 The newly renovated exterior of the Nottingham Tavern, the 18th-century restaurant in Hamilton Square now owned by Gerry Brady. (Photo by Thomas Kelly.)

These roads were used before the American Revolution, as early as 1720. At these crossroads in 1790, a hotel was built, with a roaring fireplace in the barroom’s corner to warm the weary travelers.

In the 230 years since, this hotel morphed into a temperance house, a bar which serves no alcohol, and also into various shops and living quarters. A portion of the building was also a carriage house, sheltering carriages and horse drawn wagons. A nod to the carriage house usage is on the sign outside, featuring a silhouette of a horse drawn wagon with passengers.

This historic tavern has undergone extensive renovations in the past year and has reopened this September. After an 18-month hiatus for quarantine and renovations, the lit neon signs are a welcome sight in the neighborhood.

The Nottingham Tavern was begun after Prohibition and has occupied the Mercer Street portion of the corner building complex ever since. When tavern owner Dick Voss passed away in 2016 after owning and bartending at the tavern for nearly 40 years, the landmark property was in jeopardy. Longtime Hamilton resident and businessman Gerry Brady saw an opportunity to both preserve history and enhance the Nottingham Square that the building stood sentinel over.

Buying the property in November 2017, Brady seized the downtime of the recent pandemic shutdown to rethink, renovate and add to the current property.

Also purchasing the buildings on the Nottingham Way portion of the L-shaped complex, Brady and his team reopened the tavern on Sept. 2, and will open a second phase in January 2022, enlarging the tavern with more seating and amenities beyond the original footprint.

The renovation was a complex job. The building occupies a very busy intersection and is more than 230 years old. The Nottingham Way building was lovingly numbered and disassembled piece by piece.

The timbers, hand hewn from entire trees, were still strong and 99% intact. Some of the original timbers were up to 22 feet long. Brady says the building was made with the same construction as the Abbott House, which has stood since 1730, in what now is Veterans Park in Hamilton.

The timbers, joists and rafters will be reassembled as a historic building in Wayne, Pennsylvania, so nothing is lost. The original building had a root cellar for keeping vegetables cool and usable year round. It also had a well in the basement so inhabitants could draw water during the winter months without going outside in the frigid cold.

“We salvaged the timbers, floor boards, brick from the original fireplaces and stones used to construct the basement walls. We hope to incorporate some into the new restaurant decor that will face Nottingham Way. Our whole team felt a great sense of pride at being able to preserve some history dating to revolutionary times," Brady said.

Working with the Planning, Zoning and Inspections in Hamilton went very smoothly, Brady said. In particular, Bill Callahan, the Construction Superintendent of Inspections, was extremely helpful.

“They understood the importance of maintaining this important corner in town. The building and business may have been lost as so many others have fallen into disrepair and become too expensive to rejuvenate," he said.

Brady pointed to other establishments that have closed and sit idle for years now. “Ernie’s Tavern in Robbinsville, I loved that place, The Bromley Inn in Hamilton, even The Eagle Tavern in Trenton. Now they sit, it’s a real shame," he said.

When Brady acquired the tavern, there were many needs. There was no air conditioning, draft beer or food service. In the years since, Brady has made many additions such as a spacious 1,100-square-foot patio behind the tavern, which proved popular.

The latest renovation adds a kitchen, bathrooms, central air conditioning, enlarged bar, new flooring, square footage to the barroom and a wall of windows leading to the patio area. The tavern has also updated the layout and facilities to be ADA compliant. This is Phase One, Brady says.

The current bar seats 78 patrons. In Phase Two, an additional dining area will open and expand seating to 125. The Nott (as it is locally known) will become a full service tavern, offering American pub-style food.

It is interesting to hear owner Gerry Brady speak about how he wishes to keep the Nottingham an All-American neighborhood tavern. He states this in his very Irish accent. He speaks fast and his love of the tavern tradition is apparent.

He was a barman in his native Ireland in Cavan County where he is from. He came to the U.S. in 1985, and settled in Hamilton. He joined Sean’s Landscaping, also based in Hamilton, in that year and bought the firm in 1990. “That is still my main job,” says Brady.

It is apparent that Brady is also in his element at the tavern. In Ireland the pub is a social center. Brady sees that here too.

“We get many walk-ins from the neighborhood. Many have been coming for a long time. They have been waiting patiently for this renovation. We also get many patrons from nearby Robbinsville.

Brady says the game changer of the whole renovation is the addition of parking. There was the creation of a parking lot and an exit onto Mercer Street that was not possible before.

Now part of the tavern is property behind Graycar Travel that provides even more parking. “We have more parking than many other restaurants now,” Brady said.

There are also 5 brand new apartments on the second floor of the building. They will be ready for rental soon. Four are two bedroom and one is a one bedroom. The central location and historic view will be a good draw says Brady.

The Nott will begin having bands and live music this fall, starting on Friday and Saturday nights. There will be a karaoke night, American dart league and a continuation of being an official Liverpool Premier League sanctioned soccer bar.

There will also be a large commissioned painting by artist April Zay, gracing the main room. The painting will be a view of the Square from yesteryear. It will show a view from the Nottingham Tavern side, when the monument was still in the middle of the square. Brady saw the article about Zay in the Hamilton Post and in great local spirit, hired her for the job.

Besides the longtime staff, Brady is supported by his family: wife Karen and daughters, Brenna and Ryan, who attend Monmouth University and Fordham, respectively. Brady is a family man with long roots in the town. He is happy that he could save the corner business and work to make it even better.

He looks forward to the Memorial and Saint Patrick's Day parades, the routes of which pass the Nott. The tavern usually opens at 8 a.m. to accommodate parade goers.

The Nottingham employs about eight staff currently, and Brady will look to double that in Phase two when the full food service begins in January 2022. Longtime bartenders Frieda Miller and Billy Seiler, who have 50 years’ experience between them, say they are happy to be back and seeing customers again.

Re-opening day on Sept. 2 brought out Hamilton resident Christine Kowalski and her husband Brian Moench. They thought: “The Nott looked good. It was nice having some extra room in the bar to spread out some. The additional parking at Graycar Travel came in handy. Extra parking should definitely help out. I am curious to see what the new restaurant will be like. It's always nice to have options locally when you want to go out to eat. It still did feel like the old Nott. We saw many of the same people we used to see there prior to the renovation. It definitely felt familiar.”