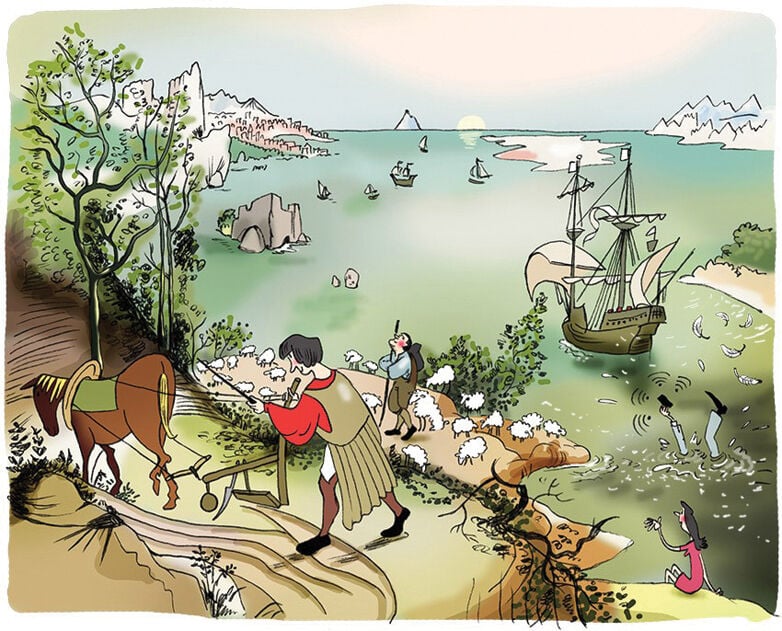 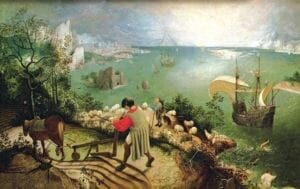 Breugel’s “The Fall of Icarus.”

You don’t expect to find insights into our troubled times from the Flemish Old Masters. But on a recent trip to Brussels I found myself wandering into the Royal Museum of Fine Arts. There, in a dark, somewhat worn room, I suddenly came face to face with an old acquaintance: “The Fall of Icarus,” the masterpiece by Pieter Bruegel the Elder (pictured).

The work is surprisingly small, as is often the case with paintings that are large in my imagination.

For years it was my screensaver. Here we see a pastoral scene by the sea. A farmer plows his field behind his placid horse. A shepherd tends his sheep. A sailboat sails in the harbor.

Like many students, I hear the resonant words of W. H. Auden in his poem, “Musee des Beaux Arts,” about the downfall of Icarus, the Greek god guilty of the sin of pride. More Americans have read Auden’s poem than seen the painting that inspired it:

About suffering they were never wrong,

The old Masters: how well they understood

Its human position: how it takes place

While someone else is eating or opening a window or just walking dully along;

In Breughel’s Icarus, for instance: how everything turns away

Quite leisurely from the disaster; the ploughman may

Have heard the splash, the forsaken cry,

But for him it was not an important failure; the sun shone

Water, and the expensive delicate ship that must have seen

Something amazing, a boy falling out of the sky,

Had somewhere to get to and sailed calmly on.

Bruegel plays a game with the viewer. First your attention is drawn to the rear end of the horse. Because of the title, you then look for Icarus, the boy who tried to fly with his father’s wings of feathers and wax. But he drowned when he flew too high, the sun melted the wax and he collapsed into the sea.

However, the spectacular image of the falling youngster is missing in this picture. A bright sun is in the sky, though, so the wax must have melted. The shepherd in the landscape scans the sky. He must have heard a cry of fear. But he appears to be standing with his back to the incident.

If you look farther, you can just see the leg of Icarus sticking out of the water at the bottom right. A few swirling feathers testify to the disaster that has just taken place.

Meanwhile in America, a reckless president, covered with peacock feathers and a start-up capital from his father, is also trying to fly higher and higher. If he already knows fear, he denies it. His enticing heaven consists of the attentions of CNN and Fox News. We on earth hold our breath because we do not want to miss the moment when the hot gaze of public opinion melts the wax.

However, most Americans are like the farmer, or the shepherd, or the sailors in the ship. They are not transfixed by the spectacle in the sky. Everyday life just goes on in its ordinary way. Every day I am surprised how little most Americans care about the drama in Washington. People worry about their own drama, their jobs, health, mortgages, the schools for their children, the performance of their favorite football team.

When the moment of the fall comes — and it will come, because political pride always ends in a fall — we read about it on the front page. But only Icarus feels it when the wax melts. The journalists will look up at the latest tweet amid the cloud of feathers swirling down. “Sad!” The ship of state will continue sailing. They have someplace to get to and sail calmly on.

Pia de Jong is a Dutch writer who lives in Princeton. Her memoir, “Saving Charlotte,” was published by W.W. Norton in 2017. She can be contacted at pdejong@ias.edu.