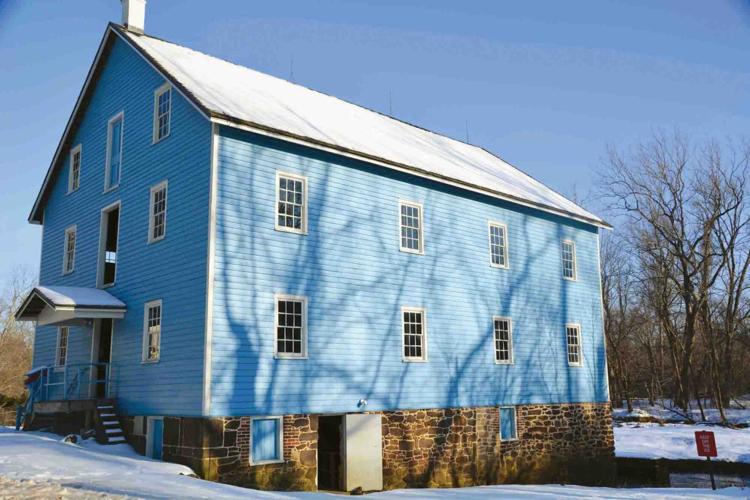 The exterior of the famous blue grist mill, the centerpiece of Walnford. 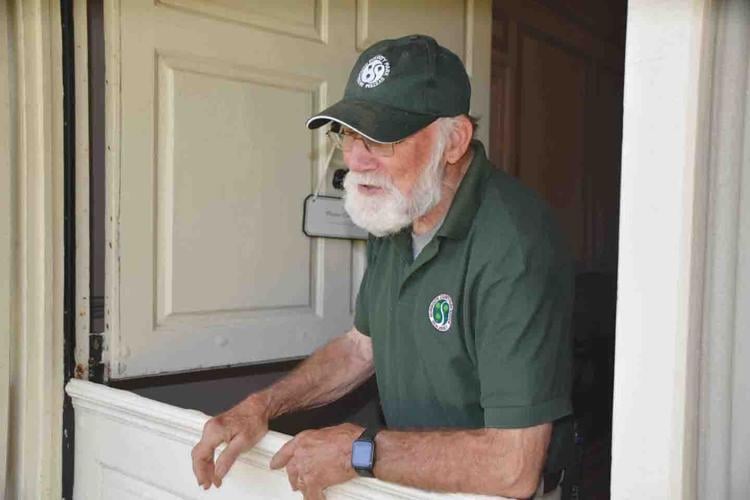 Al Trenton is an historic interpreter at the Walnford estate. 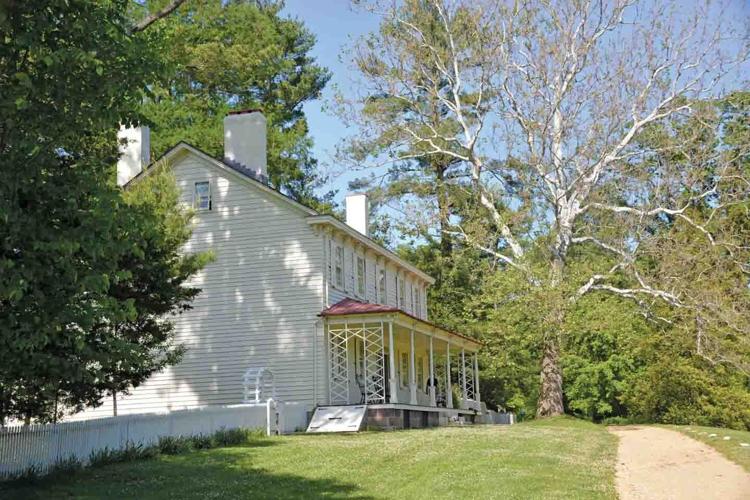 The main house at Walnford is the largest pre-Revolutionary War house in Monmouth County.

Patches, part calico, part tabby, and fully “employed” at Historic Walnford in Upper Freehold Township, was napping on a park employee’s green jacket. She was not about to move a muscle and didn’t impress a visitor as a creature who intimidates for a living.

But indeed, Patches earns her keep, especially when the sun goes down and she’s on the prowl for any mice invading Waln’s Mill, the still-functioning grist mill at Walnford.

For decades, the place has used cats to keep the pests out. In the mill, there’s even a tribute photo to the late Kernel, who did the job throughout the 2000s and 2010s, until he died at age 17.

On this balmy spring afternoon, Patches was taking it easy on the front porch of the elegant Waln House. It was originally built in 1773 and is the largest pre-Revolutionary War home in Monmouth County.

I sat on a nearby rocking chair and tried to engage the feline, but she ignored me, saving up her energy to transform into a pest-killing avenger by night.

Walnford, which is part of Crosswicks Creek Park, is one of my refuges. I first came here around 2001-’02, but rediscovered it during the pandemic and 2020 election cycle. It was my go-to place to get away from bad news and bad vibes, walk the grounds, take pictures, and listen to the silence.

I have photographed the mill from every angle, preferring to shoot late afternoon in the winter, when shadows of bare trees adorn the exterior, and its sky-blue color complements the actual sky.

Another favorite angle is just around the corner on an old bridge, where you see the mill casting a stately reflection in the water. I love the way snow softens the unadorned structures, and how ice glistens off the Crosswicks Creek.

But Walnford is equally charming in warmer seasons, and it is so, so quiet.

Located at the end of Walnford Road, the 36-acre site is tucked way back in horse country of western Monmouth County. Equine lovers can stop along the road to Walnford and admire the many horses grazing in the distance and close up.

Now that an old bridge on nearby Waln’s Mill Road is closed for repair, there are no vehicles coming and going, so there are zero car engine noises — a rarity in congested New Jersey. You might hear small planes here and there, but usually it’s just the wind in the leaves, bird song, and the low-pitch buzz of carpenter bees.

A visitor to Walnford can do much more than just chill out here, though. Guided by historic interpreters like Al Trenton (who was there on this particular day), you can take tours of the colonial home, making note of the simple but fine design and construction of the house, the original yellow pine floors, the furniture from various periods, the portraits of former owners, etc.

I paused to drink in the look and feel of the kitchen, with its huge fireplace and coal-fired oven, barn board table, and assortment of utensils. I could imagine the kitchen staff bustling around the room, preparing an assortment of daily meals for the families who resided here.

Visitors can also watch a demonstration of the grist mill on Saturdays and Sundays through November. Or, for a small fee, on the first Saturday of the month (May through November), adults can go behind the scenes at the gristmill, and join Trenton and his colleagues in the mill’s monthly maintenance. You’ll have to be ready to climb four stories and crawl a little to witness the tasks that help keep the mill going. (Reservations are required.)

You can also take a self-guided tour, which starts in the Wagon House. I ducked out of the sun in here, delighted to find a couple of large, clean, handicap-accessible bathrooms.

Information and signage breaks down the history of Walnford through several of America’s historic periods and provides a glimpse into the people who lived here.

One, Sarah (Sallie) Waln Hendrickson, the founder’s granddaughter, was particularly stalwart, running the place single-handedly, updating and rebuilding several facilities on the property, as well as serving as postmaster. Her determination and hard work helped earn Walnford a place along the New Jersey Women’s Heritage Trail.

Walnford is also listed on the State and National Registries of Historic Places.

It all began as a commercial village in the 1730s, centered around a grist mill, and by the mid-1740s, boasted a large brick house, a fulling (wool) mill, sawmill, blacksmith and cooper’s shop, tenant homes, farm buildings, 100 plowed acres, and two orchards.

With the winds of war just starting to churn around the colonies, Philadelphia merchant trader and Quaker Richard Waln decided to move his wife and family away from the city. He saw that the central New Jersey property was for sale, purchased the site in 1772, and renamed it Walnford.

Building upon the trading experience of his family, Waln utilized Walnford to craft, then trade lumber, fine flour, woolen cloth, and other goods.

A British loyalist opposed to violence, Waln had envisioned Walnford as a refuge from the coming war, and so it was for a few years, until he was challenged to take sides. He was detained for his loyalist leanings in 1777, leaving wife Elizabeth home to manage the estate.

The war did touch Walnford, and the same year of Waln’s arrest Hessians rode through the property. Traversing Crosswicks Creek, a certain General Knyphauser lost one of his spurs. Years later, when doing some work on the creek, Waln’s son Nicholas found it, and the spur is on display at the house.

By the time Richard Waln was released in 1778, he had become a vocal abolitionist, helping to launch the New Jersey Society for Promoting the Abolition of Slavery.

In his 50s, Waln emerged as a vocal and effective advocate for the abolition of slavery, spending much of his time developing legal strategies to free Black individuals who were being denied their freedom or being sold back into slavery.

Nicholas and his bride, Sarah Ridgeway Waln, took charge of Walnford in 1799, leading the village to significant expansion — now 1,300 acres with a population of about 50 people. It was at this time that the site reached its commercial heights, producing grain, flour, lumber, and pork, which Waln shipped to Philadelphia.

Sarah/Sallie had married a much older man and was widowed at a young age, but she persisted in managing the property herself for some 35 years. She updated the family home, built a new carriage house and cow barn, and rebuilt the grist mill, while simultaneously tending to her mother and several other elderly relatives.

The carriage house is, of course, where the elegant Waln family carriage is on display. On view is also the family’s sturdy sleigh, which, during the Christmas holiday season, is decked out in old-fashioned splendor, and available for visitors to sit in and pose for pictures. (All are invited to come in their Currier and Ives-style winter finery.)

Walking the walk of her Quaker faith, Sarah/Sallie was inspired to help house, feed, and educate some of the children from the most desperate local families. Orphans and underprivileged boys from the area were welcomed at Walnford, working various jobs around the property in exchange for room, board, and education. They also received hands-on training in such skills as farming and milling.

Sarah/Sallie died in 1907 at age 90 and left Walnford to her African American hired man John Wilson, which had the locals in shock. Preferring his life as a working man, Wilson shrugged off ownership and sold the entire property to Richard Waln Meirs, Sallie’s great-nephew, and the great-great grandson of founder Richard Waln.

Along with his wife Ann, Meirs brought Walnford into the 20th century, transforming the property into the quiet estate that exists today.

William Meirs, the last in the long family line to own the property, inherited Walnford in 1958. It passed out of the family’s hands in 1973, when Edward and Joanne Mullen purchased the property as their home. They donated the site to Monmouth County in 1979.

The day I visited, historic interpreter Al Trenton stood at the Dutch doors at the front of the house and reflected, gratefully, on how preserving land and historic properties is part of Monmouth County’s stated mission.

As we wrapped up our conversation, Trenton noted the time. He had to wake Patches the cat from her slumber and carry the feline to her evening and overnight shift in the mill, then lock up the rest of the buildings on the property.

I’d been so relaxed here at Walnford that I lost track of things and didn’t realize the interiors were closing for the day.

Visiting Walnford in the 1930s, author Henry Charlton Beck described the rural retreat as, “A picture from another world — the hurly burly is far away.” He obviously felt the same tranquility that keeps luring me back.