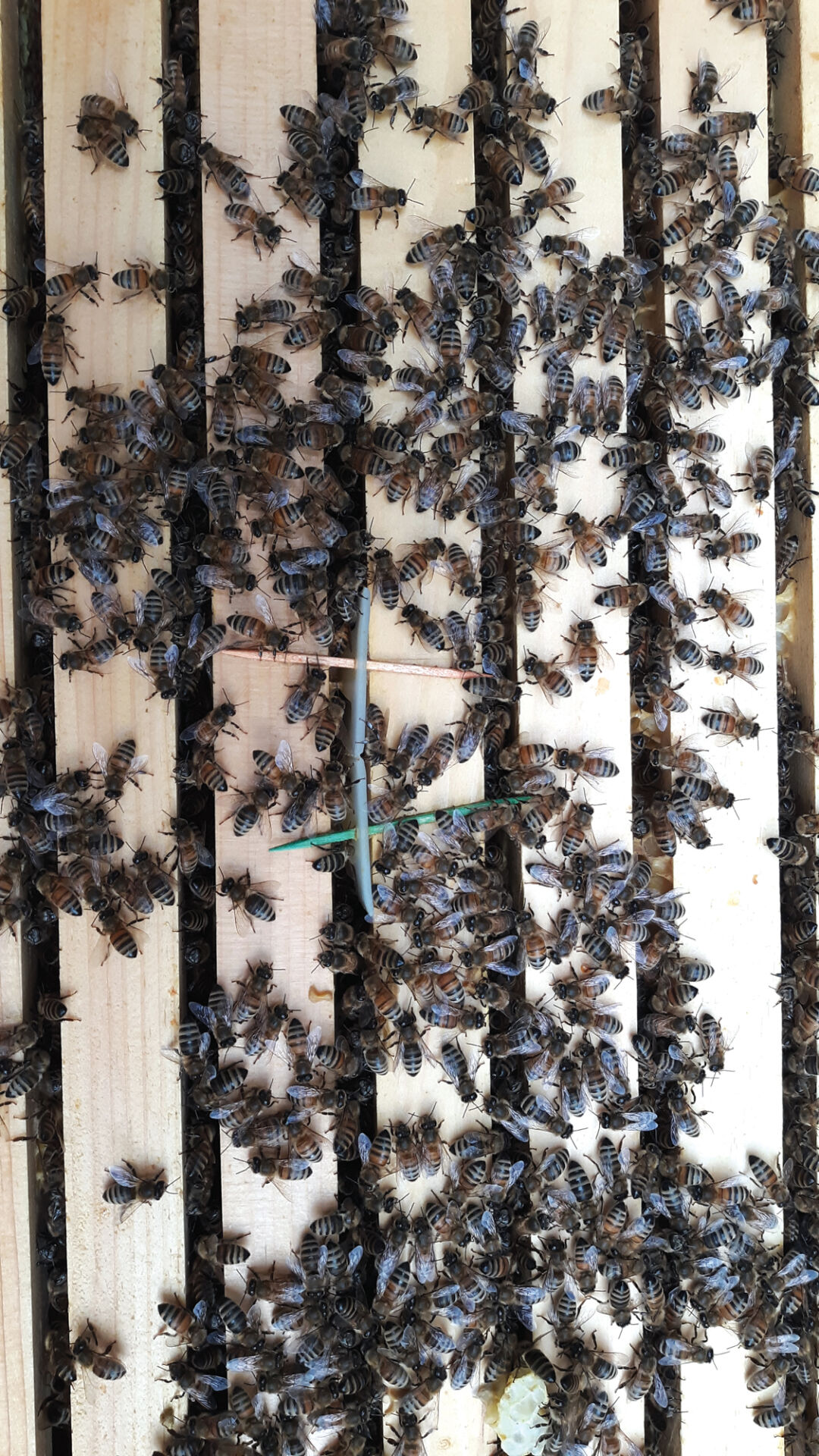 Inside the author's home beehive. 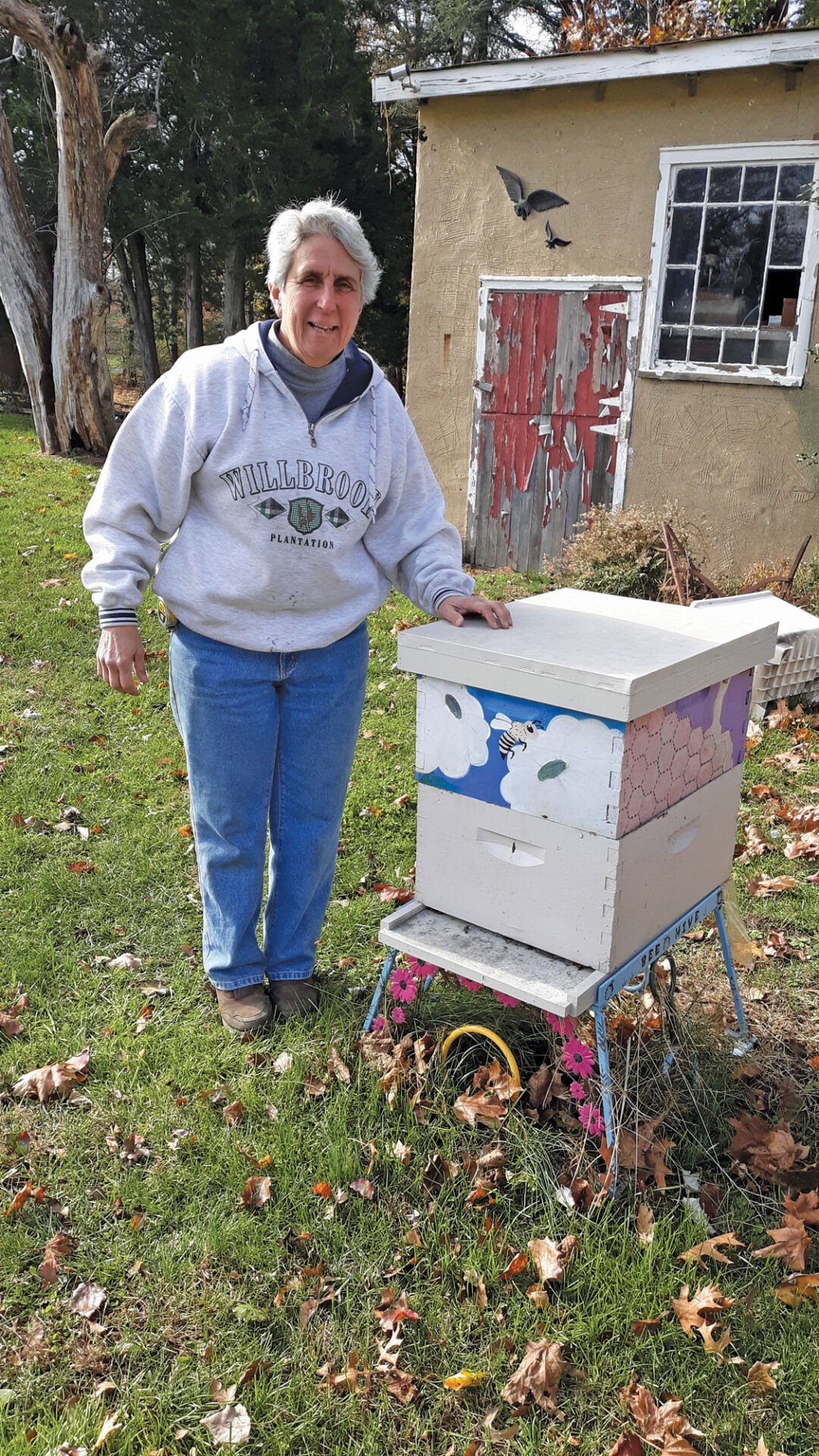 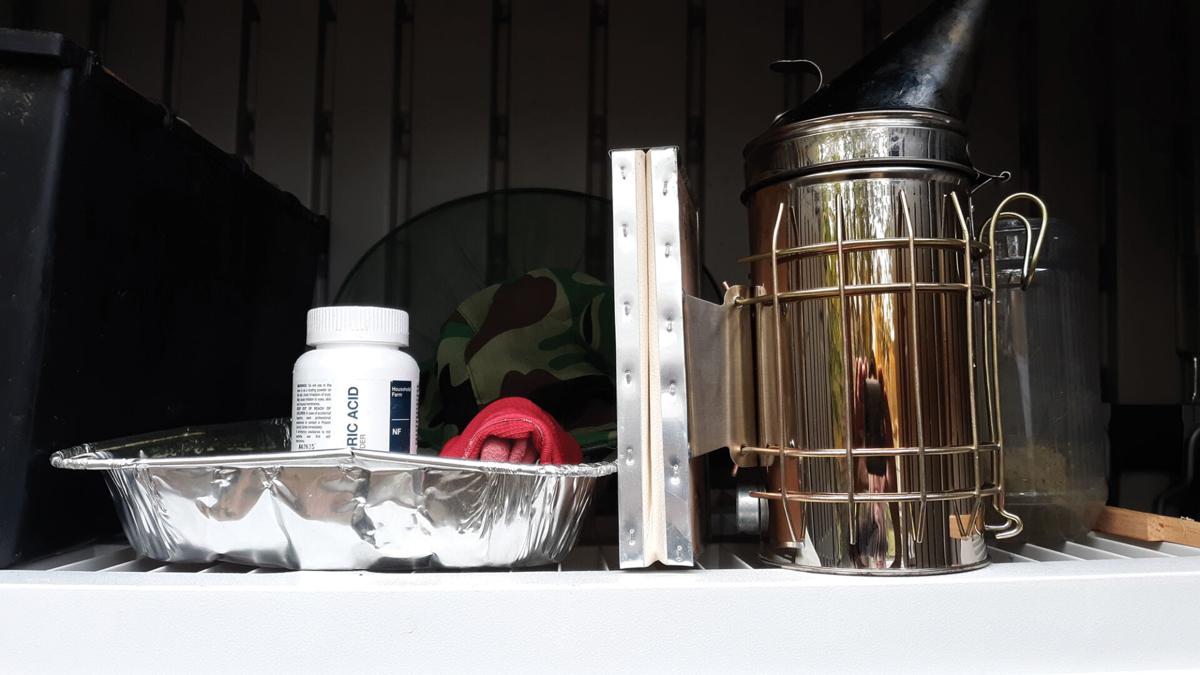 The author’s beekeeping tools, including powder, gloves, and a smoker. 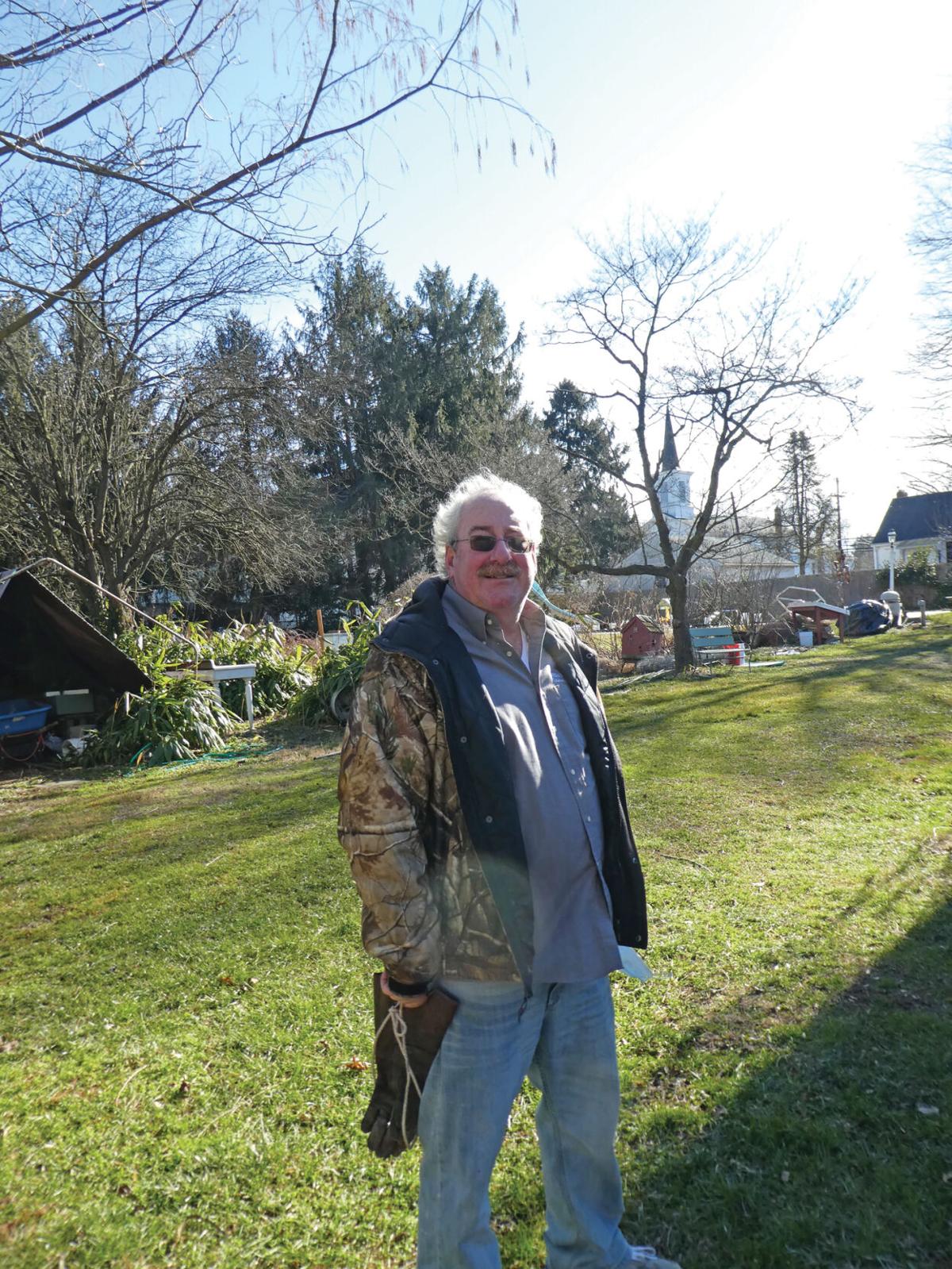 Rocky Pribell of Birds and Bees Farm in Columbus.

I had never heard of oxalic acid or Apivar or Apiguard before 2021, but there I was using the words on a recent Sunday afternoon at the BeeHive Barn in Cranbury.

That’s where beekeeper Sally Toscano and I volleyed the words around while we talked about how to support a beehive over the winter and ward off Varroa mites — another new term.

I recently turned 70 and decided to go natural this year by tending a beehive. Now I travel a regional orbit that also includes Toscano’s place and Birds and Bees Farm in Columbus, where I got my bee colony and hive boxes.

I got stung by the idea of keeping bees about 15 years ago. That’s when news articles began to appear about a noticeable trend in bee colony collapses and how it could affect agriculture.

Although an occasional stop at a honey stand or a casual chat with an apiarist would get my thoughts humming, I had simply assumed one needed to have a farm or several good acres to have a hive and dismissed the idea.

Then I happened on an article about beekeeping in an unexpected location: the rooftops of Paris, France.

It seems that the City of Lights had also once been a city of rooftop hives, and Parisians were once again tending them on apartment buildings and landmarks.

The latter got international attention during the 2019 fire that engulfed Notre Dame Cathedral. As the world tuned in, several news groups stirred up concerns about the fate of hives kept by a keeper on the historic building. When the smoke cleared, reporters were able to sweeten the bad news about the building’s substantial damage with the good news that the bees survived.

In any case, I had gotten interested in rooftop beekeeping and eventually found that there was urban beekeeping happening in Trenton, Princeton, Newark, Jersey City, and New York City. And that it was legal.

While I was itching to give beekeeping a whirl, I scratched it off my to-do list. After all, I had neighbors who grumbled about insects in general. And while a Parisian may be willing to say “oui” to getting out on a roof with a colony of bees, this Jersey guy attitude was “forget about it.”

But the idea still buzzed in the back of my mind and even led to me assigning and participating in the writing of a U.S. 1 article on regional beekeeping.

Then when my wife and I moved in 2020, I decided to go for it and got strategic.

My first step was to go online, where I found myself faced with scores of online sellers hawking hives and nucs — short for the nucleus colony or the basic unit of an active egg-laying queen, drones, and worker bees.

And while it seemed easy to just push a button and get a pack of the critters sent to my door from Florida, I had learned enough to consider the health and temperament of the bees (genetically bred bees can be more aggressive).

But more importantly, since I had no clue about keeping a hive, I wanted someone nearby to ask for advice.

That led to research and contacting Rocky Pribell’s Birds and Bees Farm in Columbus.

Pribell, who also appeared in a U.S. 1 article on falconry (the bird in the farm’s name), said he could help me get started and provide support. That included finding a home for the colony if I decided it wasn’t for me.

Then in early 2021 I made the move and made an order: two brood boxes with cells (the hanging units where bees lay eggs and store honey), a super (the small box to retrieve honey on the top), and a nuc. The cost was around $400. All I had to do was to wait for him to contact me when it was ready in the spring. There was no deposit and I could change my mind.

Meanwhile, since I had no experience with bees, I signed up for Rutgers University’s introduction to beekeeping course — a $300 online class — and received a beekeeper certificate.

Then one spring night while I was having dinner in a restaurant, I received the call that my bees were ready for pickup. And soon there I was with a sealed brood box of bees in my car truck and heading into the unknown.

While British poet William Wordsworth advised to “let nature be your teacher,” he could have said that a beehive was a university. It’s one where this force of nature and others have taught me enough to share the following, starting with the observation that except for the honey, there is nothing sweet about the life of a bee.

Yes, there is a queen bee, but she doesn’t rule. She’s selected by the hive and lives her life laying eggs — up to 3,000 per day. While queens serve for a few years, if she’s not producing, she’s dethroned by the mob.

The other bees go to work to keep the hive alive the second they can and take on the following duties as they mature: feed the queen and larva, clean the hive, guard the entrance, collect nectar and pollen, and then die.

Bees generally live for about five weeks in the summer, when they work themselves to death, and up to five months in the winter, when the hive population slows down and the bees keep the queen safe and warm by banding together.

The population is predominately female, but the drones, male bees, are on hand to impregnate a queen and then die. If a drone is lax and still alive when autumn comes, he is pushed out of the hive to conserve food — they need about 60 pounds of honey to get them through winter (a consideration that made me decide not to worry about harvesting any honey this year).

Bees are not indigenous to North America and were brought over by colonists — which must have been an intriguing sea passage.

And what is accepted as the standard beehive is relatively new and was patented in 1852 in Philadelphia by Reverend Lorenzo Langstroth.

A new beekeeper, like me, needs to support the honey production by being aware of when nectar flows and ebbs — or when certain flowers bloom and then die.

When there is a nectar drought, the bees need to be fed a sugar and water mixture to help them produce honey. When the season is high, the beekeeper can relax.

But not too much. Over the past 40 years or so, small invasive insects and mites have arrived in the United States and are the source of severe hive problems — including the deaths of the colonies.

The major one is the already mentioned Varroa mite. Named after the Italian scientist who identified them, these tiny members of the arachnid family get into the hive by hitching rides on healthy bees that during their rounds make contact with infected bees. Once in, the mites produce offspring that cling and feed on bees and will destroy the hive if not stopped.

The remedy is to monitor and treat with a variety of natural and human-made chemicals.

Since the mites are difficult to see, some beekeepers believe that their hives are mite free and relax. However, beekeeping experts and scientists studying hives argue that no hive is free, and that if three percent of the bees are positive in a mite test than the hive must be treated.

Determined to keep the bees safe through the winter, mite control has become a regular part of my life. In addition to having a closet shelf that looks like a mite treatment exhibition, I also decided to include heavy artillery: a small electric burner that goes into the hive and vaporizes a powder deadly to the mites but harmless to the bees: oxalic acid.

Although it is a great thing for the bees, they hate the intrusion and show it. And while bees are reluctant to sting, because they die immediately after doing so, all caution is gone when they’re protecting the hive and ready to teach someone how clever they are by finding ways to get through protective clothing.

They also taught me how to remove a stinger without releasing the toxins into the skin: scrape it away with rather than trying to lift it out by squeezing it with your fingers.

The other problem is the Black Hive Beetle. It’s a small ladybug-like insect that gets in the hive and produces larvae that feed on and spoil the honey, causing the bee colony to leave, starve, or dissipate.

The best path to addressing the beetles is to keep the hive strong by paying attention to its honey production and mite control.

And my new beekeeping associates agree that I’m doing what needs to be done. But I’m also using some beetle traps and treatments to make sure the hive stays healthy.

“Use them during the winter too,” says Toscano as we continue our farm yard chat.

As I nod my head and stand there holding some hive materials and packs of mite treatment chemicals, Toscano, a former teacher, drills me, “Now tell me again what you need to do after the first frost.”

I dutifully recite how I will remove the super so the bees can generate enough warmth to keep them through the winter, put on an entrance excluder (to stop other insects and rodents from getting in), feed the colony patties fortified with sugar and oils that inhibit mites, and add the long-lasting Apivar mite strips.

Toscano nods approvingly and tells me the strips will last until the middle of February — a good omen. That falls on the day dedicated to St. Valentine, who in addition to being connected with romance is the patron saint of beekeepers. Sweet.