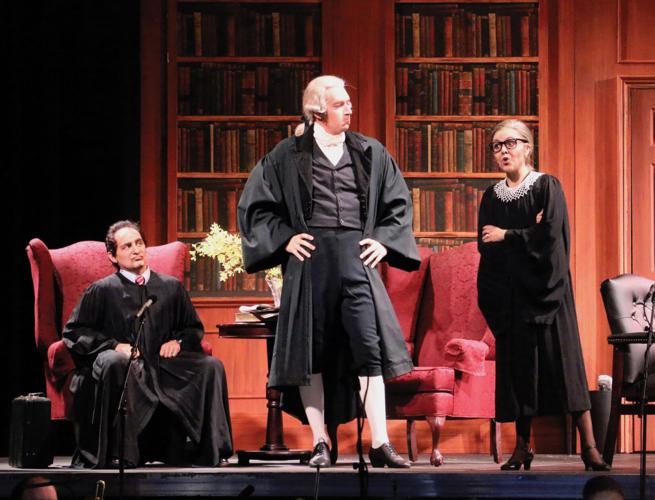 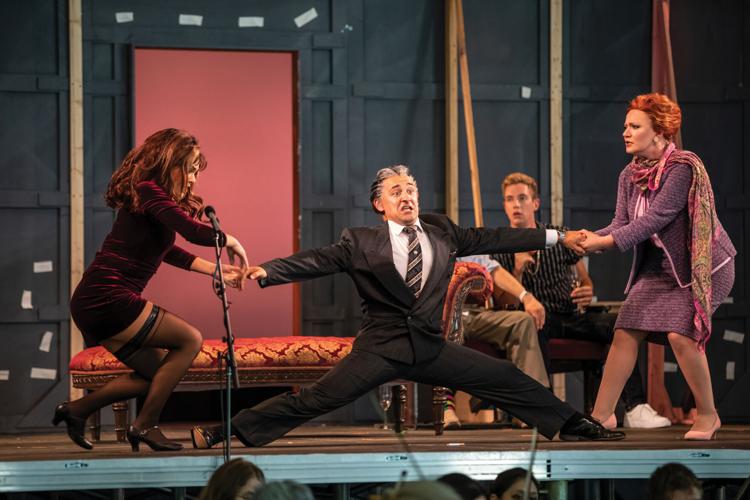 Composer Derrick Wang is far fairer than the heavenly emissary he depicts in his lusciously funny, divinely witty, and refreshingly impartial 2015 opera, “Scalia/Ginsburg,” being presented by the Princeton Festival at its Morven performance site on Saturday, June 18.

Rather than pander to a house that might favor the leanings of the late U.S. Supreme Court Justice Ruth Bader Ginsburg over her late colleague and close friend, Antonin Scalia, Wang stays neutral.

He does so not by letting either Mrs. Ginsburg or Mr. Scalia off their separate ideological and intellectual hooks, but by putting their individual judicial philosophies and attitudes towards the U.S. Constitution in sharp, keenly reasoned perspective and coming to the conclusion they balanced each other and served the Court and the Constitution well via their lively disagreements and contrapuntal dissents.

Wang’s shrewdly open-minded evenhandedness is just one admirable element of his smart, cannily constructed piece that incorporates multiple layers of wit, from the teasing and winkingly facetious to the trenchant and incisive; waggishly includes various styles of music, some of which set up hilarious instances of dance, moue, and parody, all capitalized on by Richard Gammon’s synergistic direction; and creates a fabulous evening of entertainment that appeals to the brain, sense of justice, and funny bone while eventually touching the heart.

What a good time Wang, Gammon, the cast of Nicholas Nestorak, Kelly Guerra, and Cody Müller, and musicians of the Princeton Symphony Orchestra, conducted by Rossen Milanov in lieu of an ailing Gregory J. Geehern provides.

The ebullience of “Scalia/Ginsburg” shines in sharp contrast to its companion piece and curtain raiser, Mozart’s “The Impresario” with an English libretto by Dory Previn, which plays as comme il faut and doesn’t come near its comic or musical potential.

While there’s more about “The Impresario” later, “Scalia/Ginsburg” is the showpiece on this double bill, and it glitters dazzlingly.

Wang’s first and most ongoing joke is the set up of “Scalia/Ginsburg” as a mock morality play. Justice Antonin Scalia (Nestorak) is at a long table in the Supreme Court library (handsomely designed by Julia Noulin-Mérat), a retreat of sorts where Justices can relax and have meals. Scalia commits his first transgression when he filches a cupcake from the bag containing Ginsburg’s meal.

That is not what earns him the wrath of a character who bursts from behind a stately painting stage-left and introduces himself as The Commentator (Müller) who announces he is on a mission from above to try Justice Scalia for what The Commentator estimates to be errant opinions that stubbornly, but not always cogently or logically, claim to be based on a strict interpretation of the Constitution.

Wang’s opera opens with Scalia having a temperament tirade about the Court addressing or acting on matters that are not specifically addressed in the 1787 document that skeletally codifies United States law.

The Commentator, in a somewhat Biblical manner, announces Scalia will be subject to three trials, for all of which The Commentator will be the sole judge, no appeal allowed. He also decrees all entrances and exits to the library barred and shuttered to all men who may enter.

Predictably, The Commentator left out a salient point. He said, “men” cannot enter. He says nothing about women, so Ginsburg comes in to see what all the operatic sounding fuss is about and insists upon staying, and even defending Scalia at times, to The Commentator’s frustrated chagrin.

Wang’s opera was great when Nestorak’s Scalia was on stage alone with his tantrum and justifiable reason for it. It got better when Müller appeared, and took off grandly when Guerra made the party a trio.

Wang has great fun with his characters, their librettos, and his musical line. In general, Wang supplies strong, passionate, demonstrative lines to his score, emphasizing the argumentative, explanatory, and heartfelt content of his libretto.

Ever the master of comic touches, Wang veers from his demagogic path for ticklingly amusing bits that borrow snatches from “The First Noel,” “The Star-Spangled Banner,” “Carmen,” “La Boheme,” and other operas or insinuate unexpected music. For example, there’s a soul beat that sets The Commentator and Scalia moving like Tina Turner’s backup dancers and moments that allow Scalia and Ginsburg to eye The Commentator with ironic, sarcastic expressions.

Gammon and Milanov make the most of Wang’s humor, and Nestorak, Guerra, and Müller play it to a hilt.

Wang accounts for so much in this opera. He lets you see the deep friendship, affection, and respect Scalia and Ginsburg have for each other, far different from what politicos rather than cultured jurists might think their relationship should be.

Wang also plays well on Scalia’s name. Even though Ginsburg is the one who illustrates the scales of justice, probably the most direct translation of Scalia, the name is close to “scala,” the Italian word for staircase, stairs being a major image in one of Scalia’s arias. There’s also a droll play on the words “dissent” and “descent.”

Of course, Wang nods to Scalia and Ginsburg’s mutual love of opera. At the uplifting end of “Scalia/Ginsburg” both jurists burst into soaring arias of classical renown.

It’s wonderful to find so much to see, hear, savor, and ponder from one opera. Wang’s work is full of glorious and polished achievement, one of the most gratifying being his ability to rise above current partisanship and the political fray to put the value of difference and the perspective and proportion that can come from it on stage as a concluding idea.

Richard Gammon takes advantage of every cue and occasion for both humor and the intellectual feasting that arises as Scalia and Ginsburg reveal why they look at the Constitution as they do.

The entire cast is versatile in moving from pure comedy to clear, full-throated stating of a point of view. Nestorak, Guerra, and Müller make a well-matched ensemble that smoothly plays off one another and keeps Wang’s opera consistently thrilling.

Sadly, “The Impresario” doesn’t rise to the occasion. Perhaps, rehearsal and care needed to go to “Scalia/Ginsburg” and “The Impresario,” also directed by Gammon, was left to sort out itself. The production reminded me on opera from 40 years ago, before playing the libretto became as common and critical as it is now. Previn’s jokes didn’t play. Neither did Mozart’s. All seemed so formulaic and slapdash.

Nestorak, Guerra, Müller, Aubry Ballarò, and Lance Channing acquit themselves well as singers but don’t tighten up as an ensemble enough for “The Impresario” to have structure that takes hold and engages.