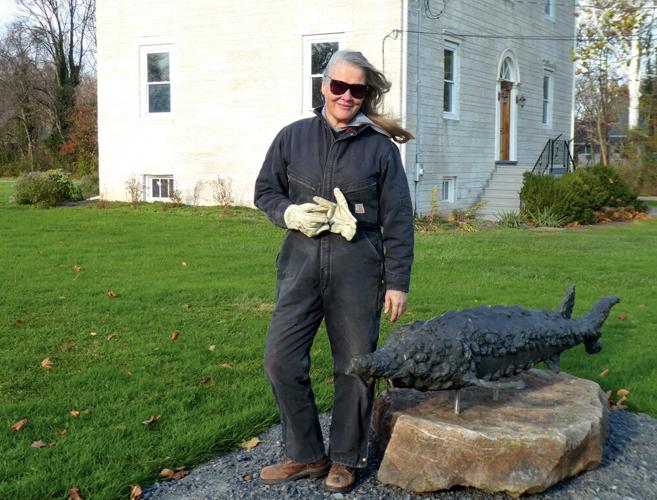 Kate Graves with one of her Atlantic Sturgeon sculptures recently installed outside the Gardener’s House at the former Point Breeze estate. 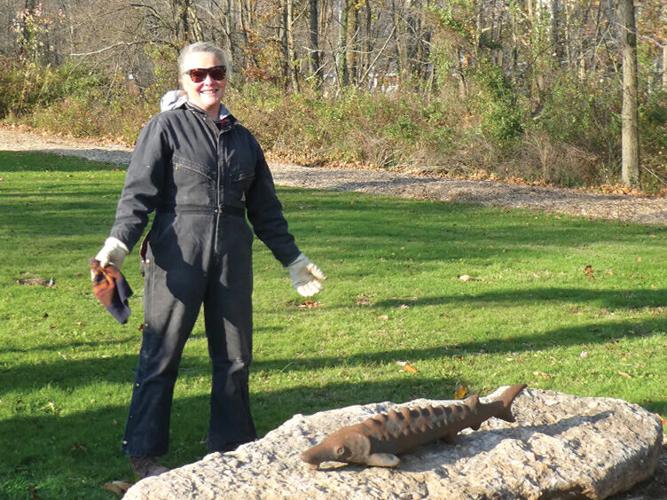 Two newly placed sculptures are making a splash for those driving by or visiting the historic Gardener’s House located on what had once been the Point Breeze estate on Park Avenue in Bordentown.

The two figures of Atlantic Sturgeon of the Delaware River were created by Trenton-area artist Kate Graves and placed in front of the historic building to raise ecological and environmental awareness.

The Gardener’s House is the only existing period structure from the Point Breeze estate built by Joseph Bonaparte, former king of Spain and brother to French emperor Napoleon.

Joseph Bonaparte left Europe after his brother’s defeat in 1815.

In 1816, he settled in Bordentown, a cultural and transportation hub between Philadelphia and New York City. Between then and 1838, he built a mansion, guest and support staff houses, and a park.

Subsequent owners dismantled all Bonaparte structures except the Gardener’s house, last used by the Catholic Church organization Divine Word Missionaries as a home for priests.

Divine Word sold the property in 2019 for $4.6 million to a partnership that included the City of Bordentown, the State of New Jersey, and the nonprofit D&R Greenway.

While Bordentown is using the contemporary buildings for offices and the State is using the property as park lands, the Greenway took over the stewardship of the Gardner’s House and has spent approximately $400,000 to renovate the building as a center that will examine the property as both a historical and natural resource.

The former will highlight Bonaparte’s presence as well as that of the Leni Lenape, European colonists, and early commerce, including the D&R Canal and Amboy-Camden Train line.

Natural history includes the vast wildlife existing in the marsh, the site’s importance for American ornithology, and the impact of human beings on the ecology of the Delaware River

“Two species of sturgeon live in the Delaware River, and both are endangered species,” said Greenway director Linda Mead about the November 18 arrival of the sculptures.

Mead said while the Shortnose Sturgeon’s population is stable, “the Atlantic Sturgeon is threatened with going extinct here in the Delaware River in just a few short years. The two biggest threats are pollution and death by ship-strikes (road-kill in the estuary). We need everyone in our region to learn about this possible extinction, and to help turn the tide and stop the march to extinction.”

Sculptor Graves noted the sculptures are part of her “Returning Sturgeon to the River” project.”

The California native who came to New Jersey to work at the Johnson Atelier said the sturgeon project begun approximately 15 years ago involved the New Jersey State Museum Natural History curator David Parris and the Hamilton-based Digital Atelier, and a vector — or graphic — art scan of an old two-foot long taxidermy mounted sturgeon in the State Museum.

“I was also allowed to make a rubber mold of a scute (the sturgeon’s ‘bony armor’ that runs in five radial lines along the sturgeon’s sides and back) that was found in a burial pit further up the river,” she said via email.

Graves says one was a nine-foot prototype that “sat in my living room for a few years until I was invited to do a technical residency at Alfred University’s National Casting Center (New York State).”

During her 10-month stay, Graves used the pattern to make a 10-piece rubber mold that “was cast individually in wax. I made resin-bonded sand molds around the wax patterns and stacked them in a (kiln) to melt out the wax at around 400 degrees. The sand molds were then lined up on the foundry floor, bronze ingot was melted in a gas furnace to around 2300 degrees, and we poured the molten metal into the waiting molds, filling the voids left by the wax.”

Graves brought the sections back and welded them at the Trenton-based workshop that served the Abominog International Arts Collective and Natural Edge, both developed by fellow sculptors who worked at the Johnson Atelier.

The second sculpture — a 42-inch, 175-pound solid cast iron work — was made and displayed as part of an Abominog-organized iron pour at the Old Barracks in Trenton to commemorate New Jersey’s sesquicentennial.

Graves said the open-ended sculpture display at the Gardener’s House “came about because Linda Mead had invited me to contribute a watercolor of the Grotto area to their upcoming inaugural exhibit. During a visit with Linda, as she was explaining her vision for the site, we talked about visual wayfinding and how important nonverbal signage can be for marking locations. I told her about the Sturgeon sculptures, and we began the conversation about how they might be integrated into the landscape.”

According to Mead, the Delaware River sturgeons are both culturally and ecologically important. In addition to being the source of most of the caviar served in the United States during the 19th century, “Native Americans fished sturgeon and used cut up parts as fertilizer for growing food. It is a fish that indicates health of the river and still exists, though rarely, in the Delaware River.”

A formal opening of the Gardener’s House is being planned for early 2023.

For more information on the D&R Greenway, visit www.drgreenway.org.

More information on Kate Graves can be found at www.kategraves.net.