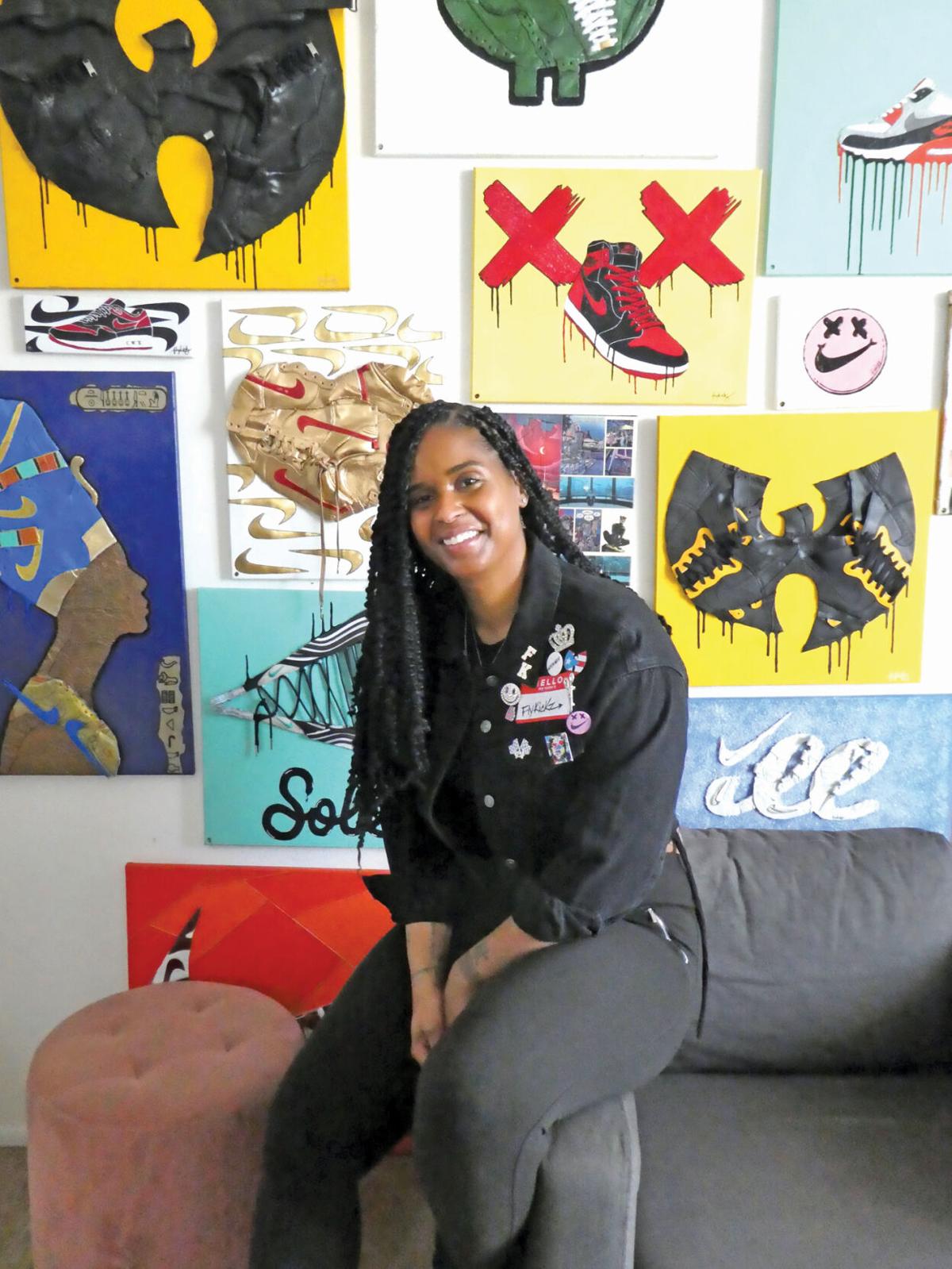 The artist Dez FlyKickz in her Trenton studio. 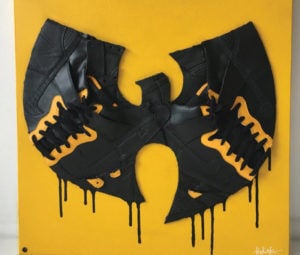 ‘Dunk Hi,’ made from Nike Dunk High sneakers and acrylics.

“In the sneaker culture to reintroduce a sneaker is a big deal,” says artist Dez FlyKickz in her Trenton studio as she prepares for her first solo exhibition at Trenton Social, the city restaurant with a gallery space used for monthly shows and openings.

For Dez, her official business name using a portion of her birth name and a reference for kicking up in motion, “reintroduce” means using sneakers as a medium to create three-dimensional relief-like planes of work.

“Red Air Jordans,” the Trenton-born and raised artist says about her choice of footwear to transform into artwork. “Any sneaker Michael Jordan wears is a big deal for sneaker lovers and people like that.”

As for why she sees sneakers as a source of art and inspiration, Dez says, “Why not? I’m taking art and making it into a masterpiece. I create art inspired by sneakers, but my concept varies. Sneakers is pretty much the muse in what I do.”

The subject is also personal. “As a kid it was how me and my parents bonded — especially my father, who took me to out to look for sneakers when I was young, especially Saturdays. Those beautiful moments stuck with me, and I wanted to incorporate them in my art.”

For Dez, who wasn’t a sports player so much as a manager, “Sneakers are nostalgic. If you asked your parents for tennis shoes your favorite athletes use, you could conquer the world. Some of my favorite experiences, I was wearing my favorite Nikes. When I graduated from High school I wore Nikes. It takes me to moments that shaped my life and who I am.”

She says it was 2009 when she stared creating art on sneakers by painting them. “I got the idea from watching others,” she says.

Then there was her break-through innovation. “I remember (the film character) Edward Scissorhands cutting things up and making them beautiful. I said, ‘I could do that.’”

However, she continues, “I had never seen it done. There were no tutorials, so I said it shouldn’t be more difficult than cutting papers. I told myself that. I wasn’t as good as I am now, but you have to keep practicing.

“When I stared creating the designs, people would say, ‘how does that happen?’ I didn’t have an answer. I said I dreamt about it. People are amazed that I can shape sneakers in different shapes. It’s not that easy. I have to plan how I can execute a design to the best of my ability.”

Although she can decide on what sneaker to use, she says, “You can’t plan the cuts. I plan out the patterns on which way that I want the sneakers to curve. I plan like an architect, a designer, and what is going to make it pop. I also work like it’s a puzzle.”

Currently she says she only uses Nikes and Air Jordans in her work, but she is also a fan of the Nike Air Force One, calling it “the easiest sneaker to cut.”

She says she gets her materials, new (roughly ranging from $100 upwards into the thousands) and old, by going on a “kind of hunt. I am a sneaker hunter. I go to thrift stores. I have also have people give me sneakers. When I feature sneakers that were donated I take a percentage for community-related projects.”

One of those projects was FlyKickz CareBags. She says it started after traveling to sneaker conventions and accumulating a collection of hotel toiletries that she realized could be used to create bags of hygiene products for people in need. She also decided to add snacks and began handing them out in 2018.

During that first year, she says more than 500 items were collected, and contributions were received from Toronto, New York, New Jersey, North Carolina, Virginia, Miami, Los Angeles, and more.

She says she distributed the Carebags with a “very special man,” her father, at the Trenton Train Station and outside downtown shelters.

She continued and grew the project in 2019, then morphed it in 2020 to provide arts and craft supplies for Trenton children “no longer in a traditional classroom and in need of creating more ways to creatively express themselves during the pandemic.”

As Dez writes on her website, “In less than 15 days with the help of over 21 contributors on her social media (we) collected over 1,300 art and craft supplies, raised $1,600 in monetary contributions and purchases creating 40 Carebags to safely hand deliver to each child” — mainly done on social media platforms.

Additionally, the artist serves as a weekly Meals on Wheels deliverer to routes in Trenton and Ewing.

About her artwork clients and her subject matter, Dez says, “Initially they were sneaker lovers. Now it has morphed into people who like art. Recently, I created a Darth Vader piece, Also DC comics and Batman Catwoman pieces. It is beyond sneaker lovers. It is people who want to support me, and that means a lot.

“This is my first solo exhibition,” she says about the Trenton show opening on Friday, June 4. “I’ve exhibited at sneaker conventions and was hired to display work, but I never had anything this extensive to show my body of work.”

A 2003 Trenton Central High School graduate, Dez says she spent a year at Fashion Institute of Technology in New York City before deciding to get an online associate’s degree and travel to experience different places, “just life,” she says.

She says her path was informed by the influence and support of her parents, both State of New Jersey employees.

“My mother would draw all my book report covers. It was gift that came to her. My father is an artist in the way he dresses and the way he articulates himself” — providing words that made her feel “that anything is possible.”

Continuing on her family, Dez says, “The support that really mattered to me was from my parents. I remember my mother picking me up from the airport. I told my mother that I wanted to paint sneakers. My mother said that I was always into Fly Kicks (a popular brand of sneaker). My father advised me that there were going to be challenges and as long as I was willing to conquer those challenges, everything else was going to fall into place.”

She says her development in art was not in taking classes or training but by being “inquisitive and figuring things out — taking things apart. I’ve been painting and creating as long as I can remember.”

The impetus for creating full-time came after attending a number of “sneaker events and trade shows. I wanted to be involved. I didn’t see any females and wanted to be in it. It was a catalyst to teach myself to do different things.

“Early on I was unaccepted because I was a female, and sneakers were a male thing. They didn’t know that I was a woman because I used the name FlyKickz. So it was surprise for many to know I was a woman.”

About her current full-time endeavor, Dez says, “It is never work as long as you love what you do. And I always was able to balance a jam-packed day. Art is therapeutic. Some people watch TV, but I do it by creating art. I’ve been artistically FlyKickz for over 10 years.”

She says she deals with the art business’ ups and downs by reminding herself that “you have to know why you’re doing. There are some days when sales are amazing, and you pay bills. Then there are some days I ask, ‘How am I going to pay my bills?’ You have to figure out what is important. You can’t be the type of artist that says ‘I am money driven’ because that takes time.”

As proof Dez notes that her online artwork — including sneaker designs on painted panels, paintings, prints — selling between $100 and $3,100 are being purchased by buyers in North Carolina, New York City, Chicago, Toronto, and the tri-state area. There are also lower priced accessories and promotional items.

“Over the past few months people have bought two or three pieces from me. Even if it is a promotional piece that I’m rolling out I appreciate that. And I’ve been blessed to have the opportunity to work with Footlocker in Philadelphia. We created a sneaker customizing workshop for youth there.”

Assessing her current career development, she says, “I just have to remind myself while I’m doing it that I love what I do. It can be challenging. Supplies can be extremely expensive. I make do with what I have, and it I’m ecstatic how it all turns out. I’ve turned into an optimist these last few years, to know that everything works itself out.”