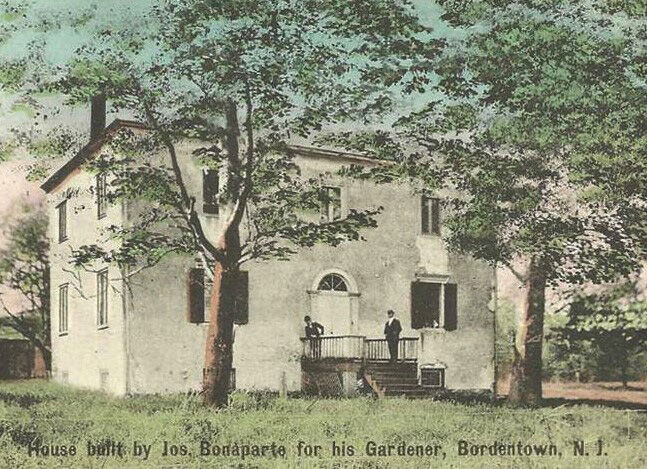 An historic postcard shows the Gardener's House in the 19th century. 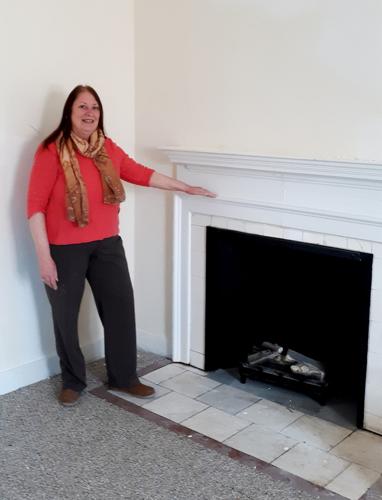 Greenway CEO Linda Mead shows a fireplace that is original to the house. 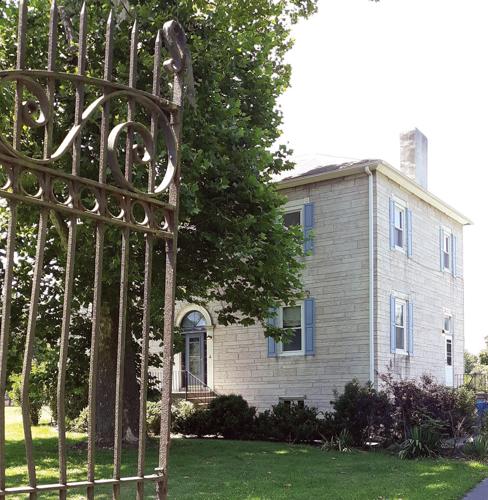 The former gardener’s house at the Point Breeze estate in Bordentown is the subject of intensive restoration work by the D&R Greenway Land Trust.

"It’s still a work in progress,” cautions D&R Greenway executive director Linda Mead as she begins a one-on-one tour of the 1820 building known as the Gardener’s House.

The only remaining structure built by the former King of Spain and brother to Napoleon Bonaparte, Joseph Bonaparte, on what had been his Point Breeze estate on a Bordentown bluff, the building is currently undergoing Greenway-funded renovations to open it to the public.

The environmental and land stewardship organization claimed ownership of the building in a 2020 joint partnership with the State of New Jersey and the City of Bordentown to purchase the property from its former owner, Divine Word Mission, for $4.2 million. The action saved the historic property from development.

Leading into the kitchen area that was last used two years ago by a few retired Catholic missionary priests, Mead points to a circa 1830 Morris Tasker wall oven, which provides a good indication of how kitchens functioned in the early 19th century.

And while there are no current plans to restore the kitchen or the entire building back to its original era, the Greenway has been working with Somerville-based architect and Greenway member Jeanne Perantoni.

Perantoni is working pro bono to strengthen the property, evoke its period look, and open a history and nature center to highlight one of New Jersey’s most historic and environmentally significant regions.

Mead’s description of the plans for a room connecting the kitchen to the current front entrance also provides a sweep of the region’s importance.

“This is the reception room,” she says, adding that it is an apt name because the building was also the first place visitors stopped on their way to visit Bonaparte.

Yet the room will also orient visitors to the reality that the property is also part of an area used by Native Americans for more than 12,000 years and home to the largest East Coast settlement of Woodland Indians, contains the oldest house in the region, was part of the American Revolution and early industry, and is the site of one of the first major archaeological digs in the United States.

“People will come in and go to the right,” Mead says, pointing to the double door that opens to Park Avenue and then to the room that will be appointed with a gallery, texts, and a video monitor to provide an introduction to visitors.

Also included is a small exhibition area to showcase thematically appropriate art — such as the planned exhibition of small works by the New Jersey Watercolor Society showing plant foods that would have been grown by the gardener — that includes Bonaparte’s favorite, artichokes.

Mead says that another topic important to the Greenway and the property is conservation.

“We want to connect people to the land and inspire conservation,” she says, reflecting the Princeton-based nonprofit’s work of preserving more than 20,000 acres in New Jersey and 20 years of exhibitions held at the Greenway’s Johnson Education Center.

“(Divine Word’s director and manager) Father Pool felt a moral responsibility to restore the land to the State of New Jersey,” Mead says about the priest who was involved with the sale of the Catholic church-owned property.

Mead, who has been with the D&R Greenway since 1997, says all the parties came together with a common goal of land stewardship that reaches back to the Native Americans’ respect for land to its successive owners.

Yet before that can happen, Mead points out the work being addressed by Edward J. Dallas, a historic restorer recommended by one of the Greenway’s partners in establishing the center, the Bordentown Historical Society.

In addition to a new front door, new floor boards to replace water-damaged planks, new trim and borders, new electric, and wall patching are part of the restoration plan for the building.

Mead heads into the next room, flicks the switch for the overhead light and says, “The electrician has been here. I’m trying it for the first time.”

After nodding her approval, she announces the name of the space, the Joseph Bonaparte Room, and says it will tell the story about how Joseph Bonaparte fled Europe to the United States after his brother’s final defeat at Waterloo in 1815.

Bonaparte arrived first in New York but moved to the then more culturally advanced Philadelphia, where he raised eyebrows through his openness about having a mistress.

In 1816 Bonaparte acquired the Bordentown property, where he built an estate that included one of the nation’s finest mansions, largest library, major art gallery, and first example of landscape architecture — all allegedly financed by the crown jewels that had been under Bonaparte’s ownership as king of Spain.

While Mead notes that a Greenway curatorial team, including Johnson Center curator Diana Moore, has been using historical photos and drawings to evoke the era, including Empire style curtains donated by Calico Corner of Yardley, she also hopes to partner with Peter Tucci for exhibitions.

The New Hope, Pennsylvania-based lawyer and member of the D& R Greenway and Bordentown Historical Society has the largest private collection of Joseph Bonaparte objects in the world.

The French Republic recognized Tucci’s contribution to maintaining French history in 2005 by naming him a Chevalier of the French Legion of Honor. The order was established by Napoleon Bonaparte in 1802.

Mead now points to an open wall section that exposes another wall with antique wallpaper and says they’re investigating to determine its age and connection to the original structure.

Restorer Dallas, a Bordentown native now based in Allentown, adds that the original downstairs area had been modified and shows an arch that once adorned the original entrance that had been covered by a wall and the current stairwell in the center of the building filled a more opened receiving room. Both say they are making a lot of discoveries about the building.

As Mead heads up the stairs, she says the surrounding walls will be used to display artwork and mentions Hunterdon County wildlife artist and Greenway supporter James Fiorentino.

Now in the Time Line Room, Mead says exhibitions in the space directly over the Reception Room will augment the downstairs information and flesh out the ownership history that also includes Stephen Sayre, a former high sheriff and London merchant who owned the property prior to Bonaparte, and subsequent owners British Consult Henry Beckett, Vincentian Brothers of Philadelphia, investor Harris Hammond, and, from 1941 to 2020, Divine Word Missions.

While records indicate that a drop ceiling was removed and antique molding is being repaired, there is a dominant fixture in the room: an architect-certified original fireplace and mantelpiece stand.

The opposite room in similar shape but without the historic mantel is the Ecology and Nature Room, which will feature information on the natural life of the surrounding marshlands, prepared in part by retired Rider University botanist, D&R Greenway member, and a catalyst for the creation of the Friends of the Abbott Marshlands Mary Leck.

The room will also highlight the region’s connection to American ornithology. Bonaparte’s nephew and son-in-law, Charles Lucien Bonaparte, was an important French-American ornithologist. He lived at Point Breeze, where he sometimes collaborated with fellow French ornithologist and artist Jean Audubon — better known as John James Audubon.

“It’s certainly the most urban property we have in our management,” Mead says back in the kitchen, adding that the Greenway sees it as a “long-term commitment to engage and educate people.”

It is also unusual in that it has attracted international media attention for its historic value.

And while the organization has developed partnerships with historical groups and the Princeton University Alumni Corps program that supplies individuals to provide curatorial and research support, it is only a portion of the effort needed to develop and maintain the center.

“We’ve been doing all the fundraising and accounting for the property,” she says listing past costs for purchase, $500,000, and renovations, $275,000; an additional $150,000 to get the building open; and the understanding that there will be some unexpected related costs.

Mead says while people in the Bordentown region are donating, the majority of support is coming through Greenway members, including a bequest that is allowing them to use $20,000 towards a challenge fund.

“Renovations are one thing, but you need to pay bills,” she says, adding that they’ll be looking for volunteers to serve as docents and to help recreate the garden — a project that is planned for spring 2022.

Mead says the Greenway’s agreement to purchase the property did not include any commitment to open and operate a center. However, she and the board felt a commitment to the City of Bordentown, citing the support of then-mayor James Lynch and current mayor Jennifer Sciortino.

Both officials continue to be involved as the city transforms Divine Word buildings into new municipal offices and a police station.

Looking at the other Greenway connections to the area, its participation in the development of Kiln Alley Park in Bordentown, organizing the owners of Abbott Marshland properties for stewardship, and its involvement in creating the Tulpehaking Nature Center in Hamilton, Mead says, “We don’t need to do this, but we made commitment to the city and to preserve the land. It was threatened and could have become warehouses. It is an ongoing responsibility, and we take it seriously.”

She ends the tour with the words, “There is so much opportunity here.”

For more information on the D&R Greenway or to donate or volunteer, visit www.drgreenway.org.