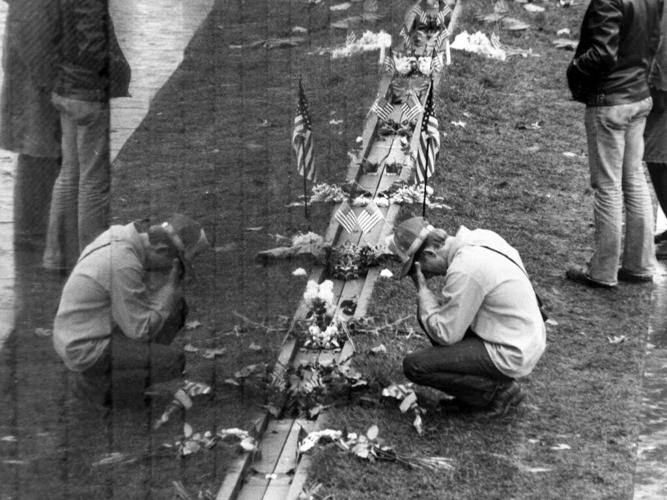 A veteran kneeling at the Vietnam Veterans Memorial wall. 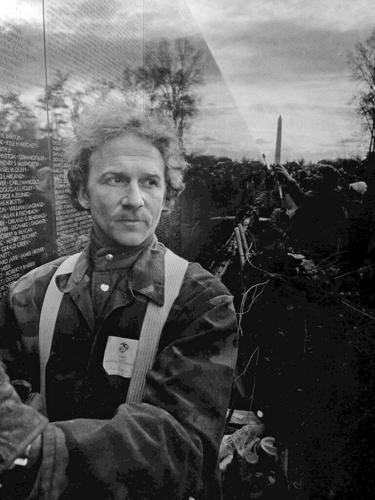 A member of an honor guard at the center/apex of the Memorial with the Washington Monument in the background. "I was drawn to the haunted look on his face," Grigsby writes. 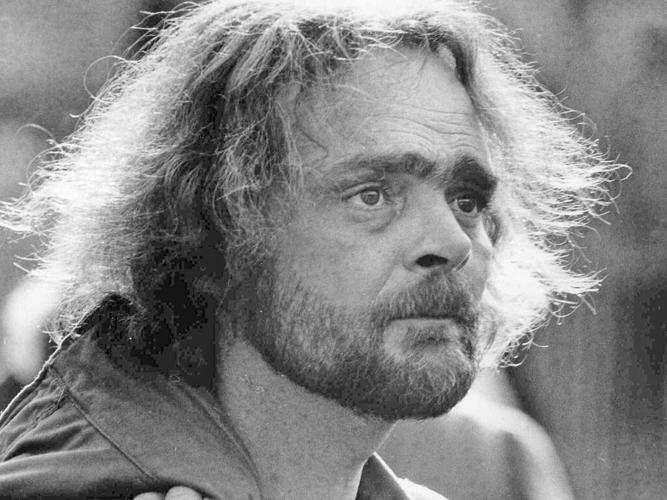 Grigsby's close-up of a distraught veteran, a face in the crowd, at the 1982 unveiling of the Vietnam Veterans Memorial.

Editor's Note: Our missing the marking of the 40th anniversary of the Vietnam Veterans Memorial was recently brought to our attention by a veteran of both that war and journalism, Bordentown resident and former chief photography editor of the Philadelphia Inquirer Bryan Grigsby.

For a quick defense, it is easy to point out that he monument itself is nearly 200 miles away from our area and that we have been involved with other events. But actually, there are a few good reasons why it should have attracted our attention.

One is its creator, Maya Lin. The then-novice designer who won the major competition and created a moving tribute to 58,220 Americans who died in the war during its years of conflict, 1964 until 1973, is represented in our region by two works commissioned by Princeton University: “The Princeton Line,” a sculpted earth design, and “Einstein’s Table,” a stone “water table.”

Yet, there is something more important: the large population of community members who served in and survived Vietnam, lost family members and friends in the war, or witnessed the contentious and painful era that gnawed at the soul of the nation. It is they who know what the memorial represents and understand the nerve that it touches and the hope for peace it represents.

Something that the writer and photographer touches on in the following:

During the years following the Vietnam War, as the event itself began to slide slowly into the yellowed pages of history, media interest in that time period began to disappear. Popular culture in film and print often depicted our experience there in a negative light.

Many of us came home to a cool or hostile reception. Unlike the so-called Greatest Generation, we were regarded as losers. The shame and horror of the My Lai massacre during the war, as well as the anti-war movement, colored how the public viewed the returning vets.

Aside from the occasional story about a deranged vet killing themselves and their families or stories of the homeless living on the streets, there was little public or media interest in the war or veterans. Fortunately, the ink on pages of the final draft of history is never dry.

On November 13, 1982, public attention made an immediate about face with the formal dedication of the Vietnam Memorial in Washington D.C.

It was the inspiration of Vietnam veteran Jan Scruggs and designed by college student Maya Lin. On that day, thousands of Vietnam Veterans from all over the country converged and marched together down Constitution Avenue to honor the names on the wall in a parade that had been denied them years before. To say the least, it was an extremely emotional event.

Looking out on the sea of faces that were milling around, I could not ignore my own feelings and reasons for being there. Sure, I was representing my newspaper The Philadelphia Inquirer, but I was also there for more personal reasons.

Vietnam was “my war” in the sense that I had found my profession during the time I served in-country as an Army documentary photographer. Like the other men and women who surrounded me that day, I had also left a piece of myself in South Vietnam.

At the time I was not aware of the emerging emotions that were beginning to surface in my own mind. The Veterans Administration was only beginning to address the impact of PTSD on returning vets. It actually took a change among the ranks of those staffing the administration of veterans’ hospitals and centers previously held by older World War II vets -- who called us drug addicts and “baby killers.”

Veterans groups refused to admit us as they did not consider us “honorable.” Unlike them, we had not “won” our war. Korean War vets were often met with the same disdain. Their war had ended in a “tie.”

It was only after time and age had begun to thin the ranks of the World War II generation that younger veterans took over the administration of veterans’ facilities and programs. Consequently, Vietnam Veterans of America was founded with a promise to not abandon the next generation of American veterans of any possible future wars.

I slowly pointed my telephoto lens across the audience now facing the long wall of names. Many of the veterans were sad and in tears.

But there were other faces in the crowd as well, and they affected me even more deeply. These were the older women and men who, I guessed, were the parents of soldiers whose names were chiseled on the wall.

Sometimes their images became blurred by my own tears. Even today I can look at those photographs and feel the same emotions I felt 40 years ago.

Note: The Vietnam Memorial Funds announced in August, 2022, the completion of a virtual Wall of Faces website dedicated to honoring and remembering every person whose name is inscribed on the Vietnam Veterans Memorial in Washington, D.C. To visit the site or to learn more, go to www.vvmf.org/Wall-of-Faces.