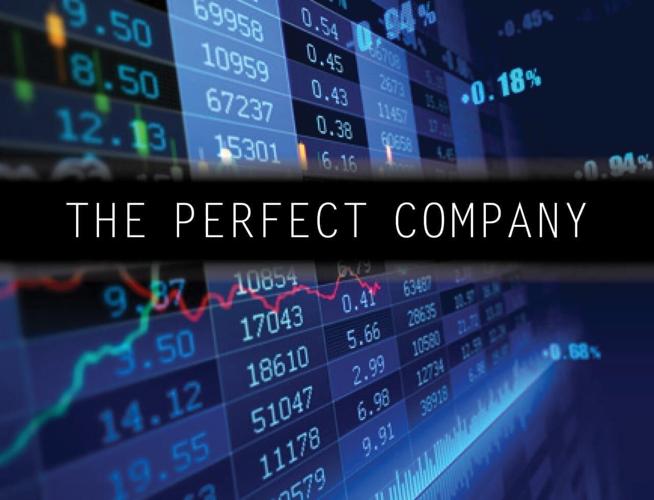 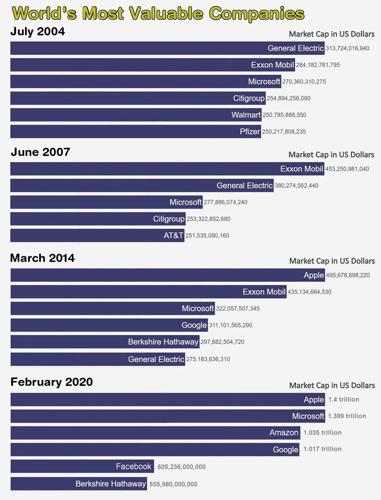 For much of the last 40 years, GE (GE) and Exxon (XOM) were the most valuable companies in the world. That is, their market capitalizations — the number of shares times the price per share — were extraordinary — more than $300 billion. Today — and for the first time — four American companies are valued at more than $1 trillion each: Apple (AAPL, $1.4 trillion), Microsoft, (MSFT, $1.399 trillion), Amazon (AMZN, $1.06 trillion) and Alphabet (GOOG, $1.02 trillion.) GE is now worth $112 billion and Exxon $260 billion.

One other company is also valued at over $1 trillion: Saudi Arabian Oil Company (2222.SR, $1.8 trillion.) The first trillion-dollar market cap was Petro China (PTR), which is now worth $130 billion. In 2008 Gazprom (OGZPY), Russia’s state-controlled oil company, was the third highest market cap in the world at $344 billion. Today, Gazprom is valued at $79 billion. State-owned oil companies do not have stellar track records.

“Data is the new oil,” goes the accepted wisdom. Data is even better than oil, though, because it doesn’t get used up. Like oil, it needs processing, but the longer data is around, the more relationships that data miners discover. Oil burns; data can be sold again and again.

These server farms are just getting started. Amazon and Microsoft each own more than a million servers. New technologies will dramatically increase the speed of servers in the near future including Solid State Drives (SSD chips that are 1,000 percent faster than rotating hard drives), NVMe SSD interfaces (500 percent faster than SATA SSD), HTTP/2 (the latest version of Hypertext Transfer Protocol now used on 33 percent of websites to reduce latency), and 5G (the next-generation wireless network touted as 100 times faster than 4G).

Someone is going to sell a lot of servers. One public company that may benefit is Supermicro (SMCI), a maker of rack-mounted servers. SMCI numbers:

Here’s another way to look at the PE ratio: with no long-term debt, you’re getting $309 million in cash when you buy the company. Take $309 million off the market cap, and you’re buying it for about $1 billion. With after-tax earnings for the last four quarters of $84 million, you have a real PE of 84/1000 or about 12.

Supermicro has recently raised guidance for the year and, compared with many money-losing, high-flying tech companies, is a real value. Further, SMCI is involved in these special situations:

• SMCI was in the penalty box since a 2018 Businessweek article alleged that Chinese spies had inserted chips on its motherboards. SMCI, Amazon, and Apple strongly denied the charge, but SMCI stock dropped by 50 percent.

• SMCI stock was delisted by NASDAQ in March, 2019, for missing filing deadlines. While I can find no evidence that filings were affected by the Businessweek article, one can imagine the chaos that such an article would create within a company.

• The stock was relisted on January 14 and has already begun to rise. Coming out of the penalty box, SMCI may have a string of developments and positive news to enhance its reintroduction to investors.

• As 5G rolls out data centers will seek faster, smaller, and more efficient servers to handle the load. Amazon, Microsoft, Google, and Apple will compete fiercely for the cloud business.

• Supermicro is working with Nvidia (NVDA) to support VDI — Virtual Desktop Interface that enables data centers to deliver centralized workstations anywhere in the world. No installation, no complex hardware to maintain locally: just switch on the environment. (A Princeton company, www.SureTech.com, is a leader in software systems that deliver virtual desktops.)

In short, SMCI is a profitable, growing company in a fundamental tech business.

It is large enough to compete but small enough to grow meaningfully and is involved in a number of special situations that make it an appealing investment.

Send feedback to gpaul@perfectcompany.com. Investment recommendations are solely those of the columnists, and are presented for discussion purposes. Columnists may own shares in recommendations. Investors are advised to conduct their own research and that past stock performance is no guarantee of future price.