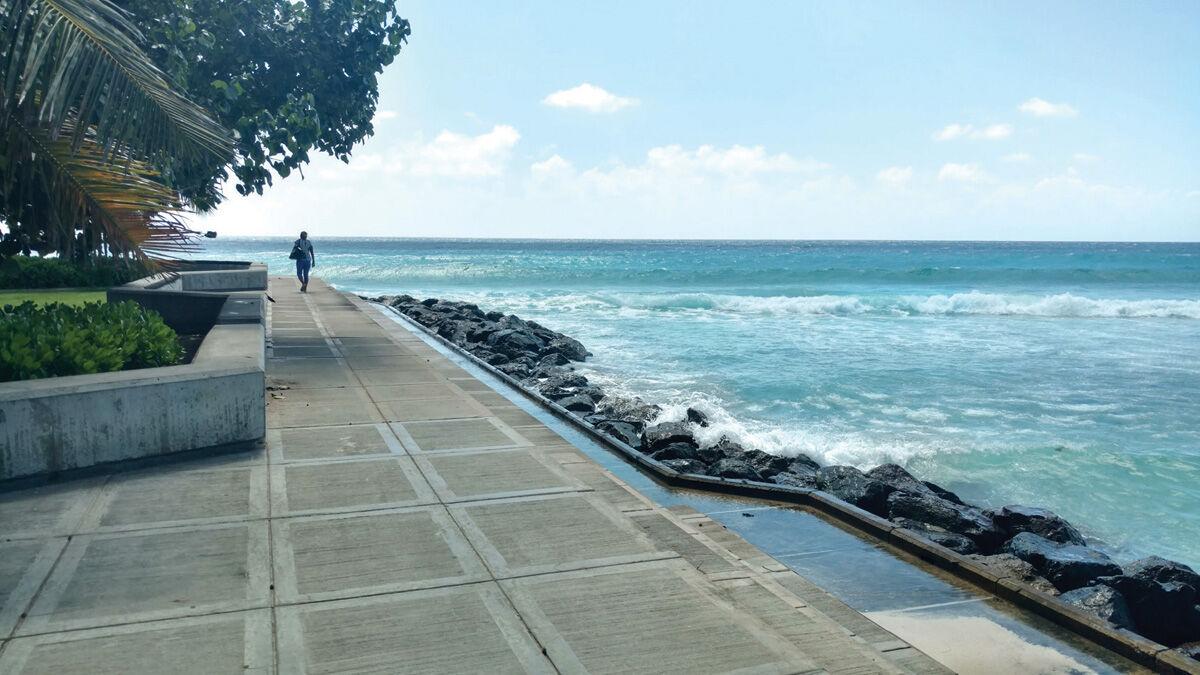 Pedestrian Paradise: It’s sunny and 82 degrees in Barbados and the boardwalk is a scenic haven for people on foot. Elsewhere on the island it is a different story. 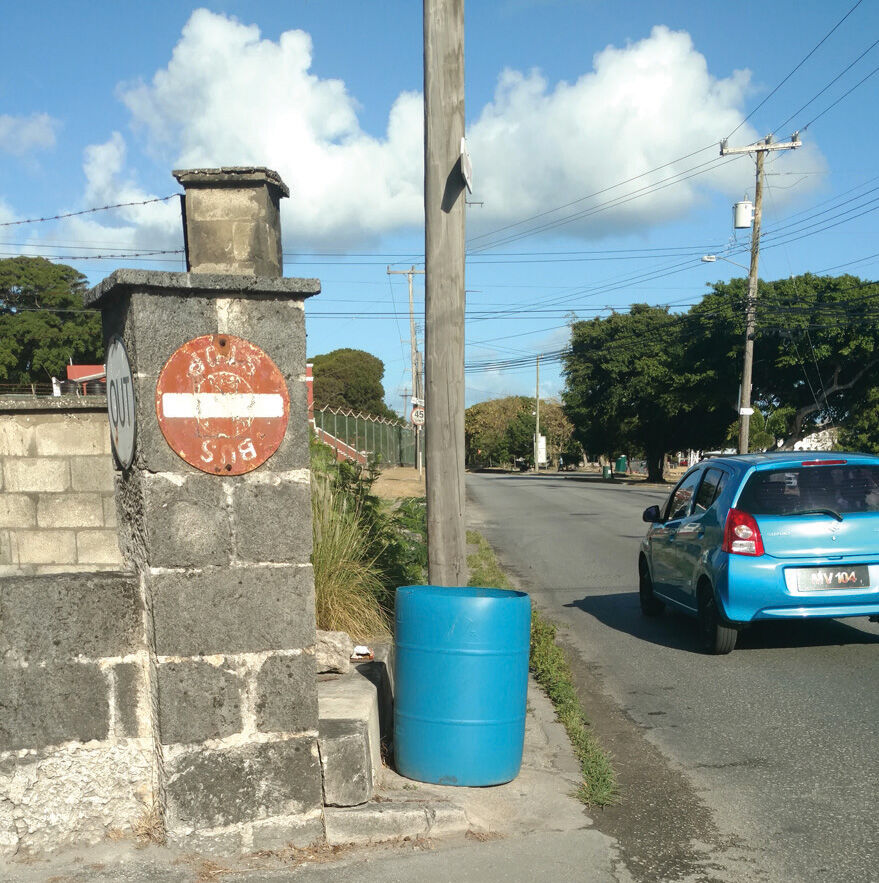 Perilous Paths: In Barbados pedestrians find sidewalks that are narrow, obstructed, or end abruptly. But with some strategic crosswalks and signs, the place could become walkable. 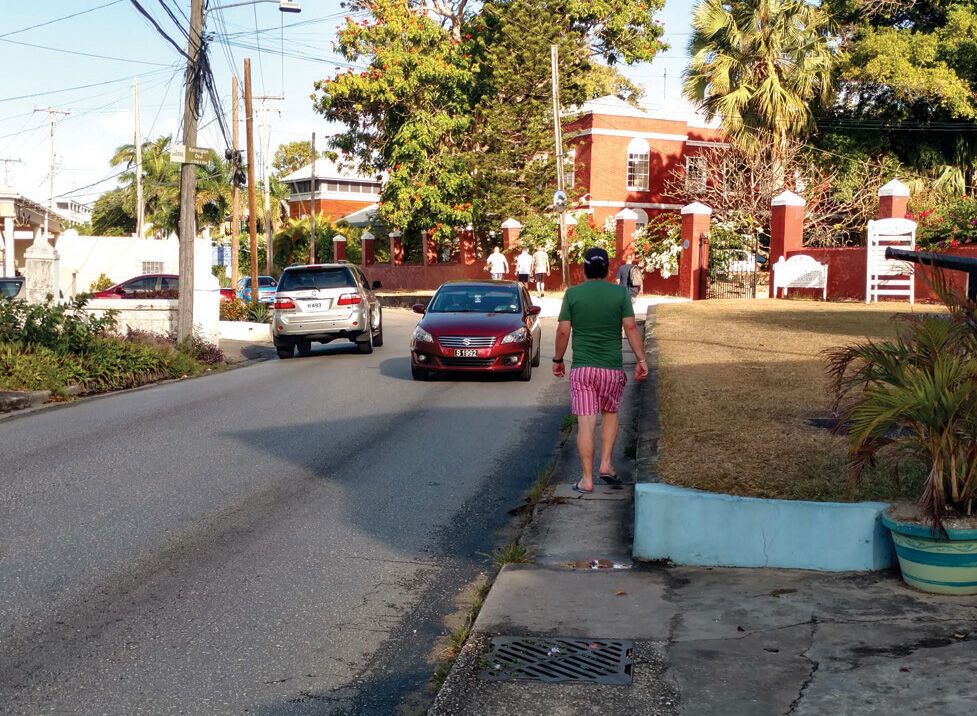 The owner of this complex, which has a front yard bordering one of the narrow segments of sidewalk, is willing to allow a path for pedestrians across his property. But no one has taken him up on the offer..

Letter from Barbados. For almost three weeks of this New Jersey winter, or near winter, I am spending time instead in sunny Barbados. It’s affordable, the food is decent, the water is drinkable, there’s plenty to do along the coasts as well as inland, and it’s safe. There is no need to hole up in a gated, all-inclusive resort — unless you’re a celebrity like Simon Cowell or Tiger Woods being hounded by paparazzi.

Who’s to complain? Well, actually, I do have one quibble. The place just isn’t very hospitable to walkers. Sidewalks in Barbados are like scraps of land lying around after the road builders and real estate developers got done with their business. A cement retaining wall is erected at the edge of a property that is several feet higher than the adjoining road. The edge of the wall comes within two feet (at most) of the road. So let’s call that a sidewalk, and make pedestrians walk single file as cars and buses and little vans crammed with tourists and Bajans whiz by.

Meet another pedestrian coming the other way? Well, look carefully in both directions and one of you steps out into the road to let the other pass by — quickly. Fortunately Bajans are good natured, patient, and follow something called “Bajan time,” which means they are rarely in a huge rush. People tolerate the haphazard paths.

On this visit, my fifth in as many years, I study the pedestrian movements more carefully. In some places a halfway decent section of sidewalk enables pedestrians to move easily for a block or two. But then it ends, when some building or wall butts up to the road. The choice is to walk in the busy roadway, or cross over to the other side to pick up another section of sidewalk. There are crosswalks in Barbados, with zebra stripes nearly faded from view. The good news is that polite motorists will yield to pedestrians. But, alas, the crosswalks aren’t where you need them.

The shortcomings feel even more dramatic because Barbados is also home to one of the most scenic pedestrian paths in the Caribbean. It’s the nearly one-mile-long boardwalk that wends its way along the south coast of the island. It’s about 12 feet wide, broad enough to allow plenty of two-way traffic that includes the usual joggers and walkers as well as younger parents with strollers and older parents with walkers. The walk is punctuated with four promontories that reach into the sea, good places for dramatic photographs. A travel website puts the boardwalk No. 6 on a top-10 list of attractions in Barbados, ahead of the combination tour and tasting at the Mount Gay rum factory.

The landward side of the boardwalk is flanked by hotels, guest cottages, and restaurants and bars. One place that opened this year, the Blue Pineapple, has an outdoor dining area open to the boardwalk. Half the customers arrive via the boardwalk; the others come in by car from the street that runs parallel to the shore. By 10:30 in the morning, almost every seat is filled with customers enjoying an al fresco breakfast and the passing parade.

It’s a pedestrian paradise — no bicyclists, dogs, skaters, or vendors allowed. But when you come to the end you face two choices: Continue your walk by slogging through the sand, or head over to the street and the sidewalks, such as they are.

What can be done? Up until this year my thought was to extend the boardwalk. My Bajan acquaintances have had the same reaction: To improve walkability along the south shore of Barbados the solution is the extension of the gold standard already partially in place: the boardwalk. In fact, the government has promised to continue the boardwalk another mile and a half or so. But it’s not likely to begin for another two or three years, and is already estimated to cost more than $15 million. Moreover, this particular improvement will benefit us tourists and the businesses directly lining it. What will it do for the community 100 feet or so away, on Highway 7, the busy road that lines the south coast? Not much.

And what are the chances that the plan for an extended boardwalk turns into a reality? I check out the Ministry of Transport & Works on the government website and see many other infrastructure projects more critical than a pedestrian path.

At that point, I change my approach. I channel the subject of the biography I am working on in my spare time, the urbanologist William H. Whyte. In his 1988 book, “City: Rediscovering the Center,” Whyte noted that since Victorian times, at least, pedestrians are considered by urban planners something not to be planned for, but rather planned against. Get them off the street and onto the boardwalk, segregated from the rest of the community. What the planners really care about are the motorists.

As Whyte would have done, I take a closer look at the pedestrians along Highway 7. Eventually I see two problems. The first is that tourists, once headed down the road, resolutely stay on the side of the road they started out on. Eyes fixed on the urban horizon, they rarely look to their left or right to see another, safer walking path on the other side of the street.

The second is that even when their path takes them immediately parallel to the boardwalk, they rarely leave the roadway and use the scenic pedestrian path instead. That’s because access to the boardwalk is often blocked by hotels and guest houses situated between the street and the boardwalk and because, where there is access (in two places by going through vacant lots) there are no signs. In fact, I discover, there are absolutely no signs on the street announcing the presence of the boardwalk, one of the vaunted tourist attractions on Barbados.

So I come up with a low-cost plan to establish a pedestrian pathway that would permit someone to walk along the south coast of the island — on the street from the Barbados Yacht Club to the west, to the boardwalk as it now exists, and then back along the street to the dining and entertainment district known as St. Lawrence Gap to the east — a total distance of about three miles. It could be done with the creation of three new crosswalks at strategic locations on Highway 7 and a dozen simple signs pointing the way along with sidewalk where the safest path changes sides and also pointing to several points of access to the boardwalk.

Later, if someone wants to spend a little money, the crosswalks could be enhanced with blinking lights (solar-powered, course), triggered by a pedestrian-activated button. And at a few places along the road, a foot or two of roadway could be taken away from motorists and given to pedestrians. Motorists might have to slow down by a few miles an hour at those pinch points.

But what do I know? I’m only a tourist, not an urban planner or architect. So I run the idea past a few year-round residents. One Saturday morning, walking the perilous sidewalks, I pass by the old army medical barracks, built in 1802 when Barbados was still a British colony. Today the group of buildings is a mixed-use home of several businesses, artists’ studios, and residential apartments. I wander through it and discover a half dozen vintage automobiles being prepared for a parade. The owner of the cars, including a Bentley convertible, is also the owner of this complex, which has a front yard bordering one of the narrowest segments of sidewalk.

I ask if he would object to pedestrians using a few feet of his yard as a sidewalk. Not at all, says Bill Mallalieu. In fact, when he purchased the property many years ago, he spoke to the prime minister at the time, offering that piece of land for a “proper sidewalk.” But, “as is typical they ignored me.” He suggests that getting the job done will likely involve “interminable delays.”

I do some crowd-sourcing at my hotel’s beachside bar. The group is skeptical, for the same reason as the car collector. But one patron, a 94-year-old native, has an idea. His son is an architect who works on the island, at a place called Lime Grove. Maybe his son could help.

Later that evening my significant other announces she has to do some shopping, at Lime Grove. I accompany her, except I head off for the office of the architect, Douglas Luke. Eventually I find it and introduce myself. Luke is out of the office, but a woman on his staff hears my improbable story. When I mention my research on walkability and William H. Whyte, the woman’s eyes light up. Luke, she says, has worked in the states, specifically with Andres Duany and Elizabeth Plater-Zyberk, and also with the architect Stephanos, Stephanos . . . she pauses to pull the last name out of her memory bank.

My mind races. Duany and Plater-Zyberk are two founders of the Congress for New Urbanism, and their book, “Suburban Nation,” cites Whyte as a major influence. And Stephanos, whose last name is escaping the Bajan architect, is, I say out loud, “Stephanos Polyzoides, my college roommate!”

It’s a small world. A few days later I return to Lime Grove and meet in person with Doug Luke, who assures me that my walkability plan is worth pursuing. He suggests that I contact a tourism office that already has placed signs, financed by advertising, at various points around the island.

I am greatly encouraged. I’ll get started, I decide, but not immediately. I’m on vacation, after all, and it’s Bajan time.