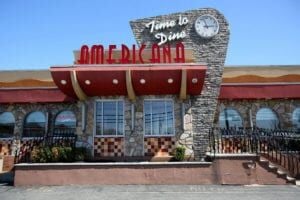 The original Americana Diner on Route 130. 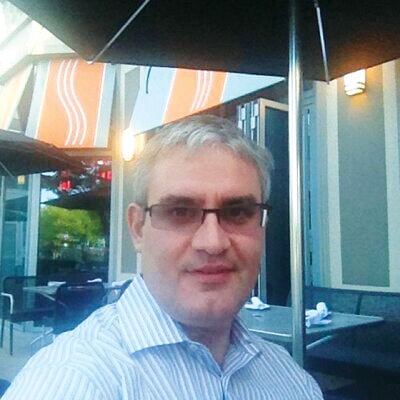 “Diners are part of our mythology; everyone from New Jersey grows up with the culture of diners ingrained as part of life.” — Michael C. Gabriele, author of “The History of Diners in New Jersey.”

Yes, it’s true that New Jersey is still the diner capital of the world. But that reputation has been slowly fading over the years. Those in the know credit Jerry O’Mahony of Bayonne, New Jersey, as the inventor of the 20th-century diner, and his company alone built more than 2,000 of the prefabricated beauties between 1917 and 1956. Today, according to author and diner historian Gabriele, more than 500 diners still dot the highways and byways of the Garden State.

One iconic stainless steel, chrome, and Formica beauty that’s no longer with us is the Americana Diner, a beacon of piping hot coffee and good eats that beckoned hungry travelers with its “Time to Dine” sign along Route 130 in East Windsor for years.

Katsifis, 49, grew up in East Brunswick and currently lives in Cranbury with his family of four children, three boys and a girl, who range in age from nineteen to six. His wife, Helen, is a medical professional. Helen’s mom is part of the family as well.

For the past few years he has been overseeing a total makeover of the property that has been in his family since his father purchased the Americana in 1988, formerly known as the Copper Bell Diner and Restaurant when it was built 10 years earlier. Following a stint at Rutgers studying engineering, young Constantine went to work for his father and purchased the diner from his father soon after, determined to turn the then-flagging business around.

What’s emerged after several iterations over the years is the Americana Kitchen & Bar  (AKB), a 15,000-square-foot architecturally

stunning edifice that eschews the ersatz space age materials and garish Jetsons color palate of the 20th century (not to mention that “Time to Dine” sign) and replaced them with an understated, aesthetically pleasing mix of brick, natural wood, leather, cloth, and polished concrete in soothing earth tones.

Keeping “Americana” in the name was a priority for Katsifis in the re-branding of his restaurant and was the source of the inspiration for the new design. “It’s been part of the name for many years,” he says, “and the quintessential American architect is Frank Lloyd Wright, so we were inspired by his work, specifically the Robie House, a favorite of mine. It’s a perfect building; the overhang of the roof, the horizontal brickwork, the use of natural materials. So that became ‘Americana’ to us.”

(Note: Built between 1909 and 1910, the Frederick C. Robie House is a U.S. National Historic Landmark now on the campus of the University of Chicago in the South Side neighborhood of Hyde Park in Chicago, Illinois.)

Katsifis notes that the design work was the brainchild of Josh Nathanson, whom he worked with on the first redesign of the Americana in 1995 and a 2001 addition, and on two other projects, the Skylark in Edison and the Colonial Diner on Route 18 in East Brunswick. He says he has since sold both properties.

One other iconic signifier of the location’s past life that was jettisoned in the makeover was the word “Diner” in the name.

“Unfortunately it seemed that while I was trying to move the diner in a different direction, I was virtually alone in doing that, and that’s a pretty dangerous place to be,” Katsifis explains.

“I had not served traditional diner food for 15 years, but I had people coming in with a certain expectation about what a diner is and telling me what a diner is supposed to be, so I had to drop ‘diner’ for a name that enables me to be more flexible in what I offer. There are restaurants called ‘kitchens’ that are Michelin-starred restaurants and others that are community pubs.”

While there are still menu items on offer that would be familiar to hardcore diner aficionados, such as pancakes, bacon and eggs, and a very decent cup of coffee (sourced from Lacas Coffee Company in South Jersey), the presence of a Grain Bowl containing farro, quinoa, chickpeas, black beans, queso fresco, red onions, and cilantro ($10, gluten-free and vegan) or a serving of Trilogy Organic Kombucha from California ($4.50) might cause a bit of head-scratching on the part of non-foodies.

Katsifis acknowledges that the current menu is part of an evolution in his thinking that has been taking place over a number of years. “In the early days, my interest in business came before my passion for what’s on the plate,” he says. “But over time I’ve developed a strong interest in sustainability; where food comes from, how it’s prepared, sustainable living wages for employees, all those things.

“When I started working with Craig Shelton (Noted James Beard Award winning chef and chef/owner of the critically acclaimed Ryland Inn in the 1990s) at the Skylark in Edison in 2009, it was my first opportunity to have a mentor in this industry. Prior to that I was struggling to figure things out on my own, go to restaurant shows, learn by trial and error. It wasn’t until I started working with Craig that my approach to running a restaurant became a more integrated process.

“I asked him if he’d help me for a little while, to help me rethink what we were trying to accomplish with the diner,” he continues. “We were in the midst of a pretty deep financial crisis at the time, it seemed like demand for fine dining was a bit soft, and we had a nice synergy going, and have had a very successful collaboration.”

Katsifis says he sold the Skylark in 2015 so he could turn his full attention to the next incarnation of the Americana. “I wanted to focus on getting away from the diner,” he explains. “The diner is my first love, but I believe the concept of what a diner is can evolve, just as other culinary concepts evolve over time. It can give you the freedom to be open breakfast, lunch, and dinner, and within that constraint you can do anything. You can bake your own bread, use organic flour to make pasta, serve grass-fed beef, and evolve your menu as your community changes.

Patrons of classic Jersey diners will especially notice the changes to the dinner menu. ABK’s eclectic “Regular” dinner offerings range from $16 to $27, and include decidedly non-diner preparations such as grilled branzino served with sweet peas, leeks, shiitake mushrooms, and mustard seed vinaigrette ($25).

One splurge, on the “Prime” section of the menu is a 50-day dry-aged, bone-in prime strip steak. The 16-ounce cut, served with fingerling potatoes and garlic butter, is priced at $45.

ABK also sports a cozy bar and offers a well-chosen selection of cocktails and beer. Katsifis is particularly proud of ABK’s wine selection and his approach to pricing a bottle of wine. A wall of wine in a temperature-controlled glass case is a feature of the new interior, and a counter-height wine table/community table of polished concrete and wood in front of the cooler seats up to 18 guests and is used for tasting dinners, wine tastings, and open seating during Sunday brunch.

“We went from a very humble wine list to trying to have the best wine list in the state,” he says. “The wine list has Craig (Shelton) written all over it.” Shelton is listed as “Wine Director” on AKB’s website.

“His concept, which we adopted completely, is that wine is food, meant to be enjoyed,” Katsifis says. “A bottle of wine is essentially a retail sale, and the traditional markup of three times or so is not appropriate. You’ll find wine on our list that’s priced between 10 and 15 percent of what you’d find in a nice wine shop. We don’t punish our guests for wanting to enjoy wine with their meal.”

A scan of AKB’s “interactive” wine list bears Katsifis out. Among the Malbecs, a 2017 Cepas de Familia ($25) retails for $17 at one online merchant, a 2015 Vinya Cobos ‘Bramaren Lujan de Cuyo’ ($62) was found online at one NJ retailer for $40. And Roderer Estate Brut, a highly regarded sparkling wine from California is listed on AKB’s website for $26, just a few dollars above its typical retail price.

Although the 15,000-square-foot building is finished, Katsifis notes that additional site work and improvements to the parking lot remain. The construction took more than two years, at a cost he pegs at over $2 million. Seating in the main dining area has actually been reduced from 345 to 250 comfortably spaced seats, plus a covered patio seating an additional 100 or so guests. Two soundproofed private event spaces have been added that are equipped to handle meetings, seminars, lunches, holiday events, community social events and the like.

And he hasn’t completely forsaken guests who still wax nostalgic about the heyday of the old Americana Diner. They can feast on AKB’s Classic Jersey Sandwich of grilled pork-roll, fried egg, cheddar, lettuce, and tomato on a house-baked roll, accompanied by gravy fries ($11). Time to dine!

Time to Dine — Outside

The Americana has offered takeout and delivery of regular menu items during the state-enforced shutdown of restaurants due to COVID-19. It has also offered a drive-in real food market in its lot. This week it joined the party of New Jersey restaurants reopening for outdoor dining at limited capacity. Tuesdays through Saturdays the restaurant will pub/cafe service beginning at 9 a.m., with breakfast items available until 4 p.m. The full bar is available.

A “Sunday Brunch Experience” will be offered Sundays from 9 a.m. to 4 p.m. including house-made pastries, a choice of entrees, and a dessert tasting plate. Reservations are recommended.

What do the Glenmoor Diner, Greenline Diner, and Clarksville Diner have in common? Area residents with a long memory may recall all three as long-gone popular roadside eateries. The Glenmoor disappeared when the Penns Neck traffic circle was “improved.” The Greenline in Princeton (renamed the American) was destroyed by fire in 1990.

The Clarksville met what is perhaps the most interesting, and circuitous, fate. Also starting out at the Penns Neck Circle (the intersection of Washington Road and Brunswick Pike) circa 1940, it was moved three times before finally being sold and moved to Iowa, restored (twice, thanks to an encounter with a car with a drunk driver at the wheel) and listed on the National Register of Historic Places in December, 1993.

But the Clarksville’s journey didn’t end there. It was purchased by French media giant Canal+ in 1998 and shipped across the Atlantic to France. Wedged between two skyscrapers along the Seine, you can view an image of the Clarksville in France at https://tinyurl.com/y3ydowbh. (Source: West Windsor Historical Society).