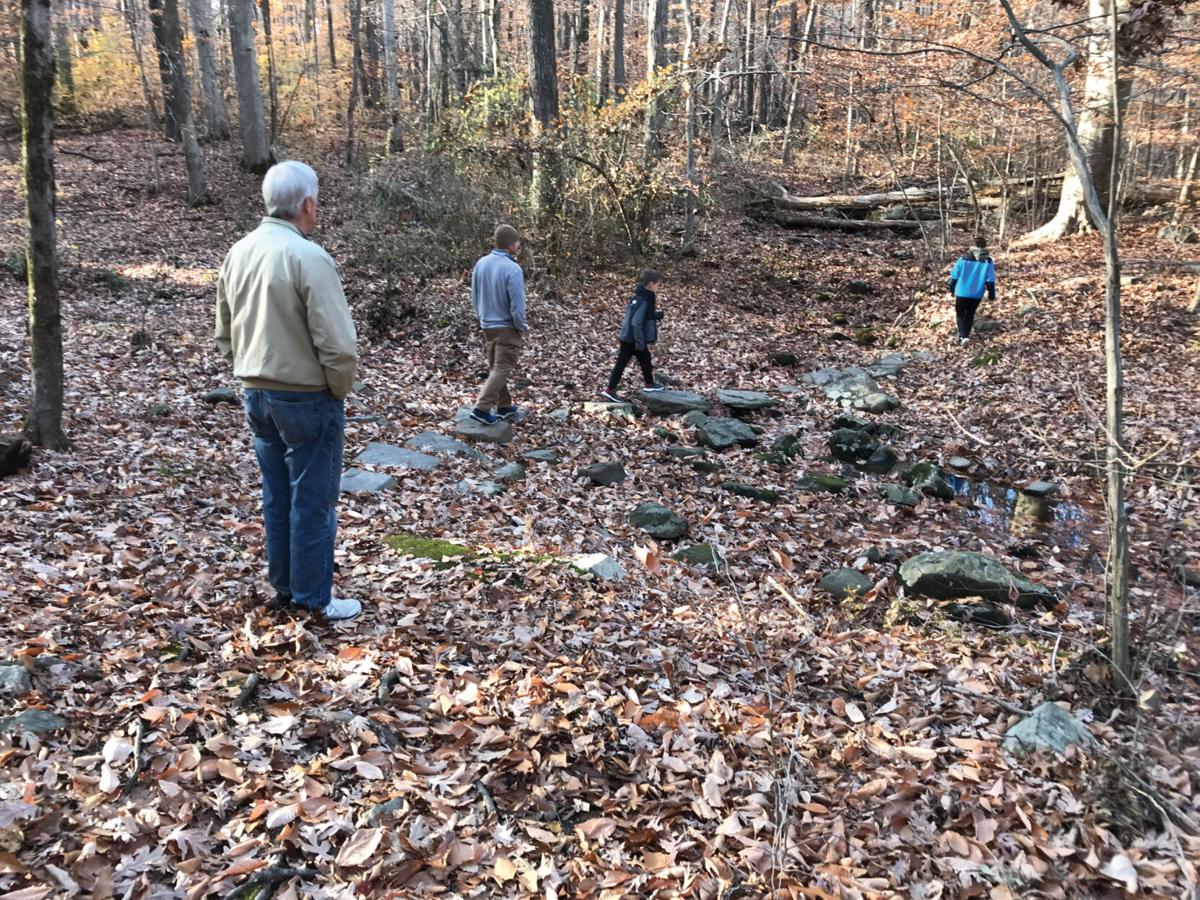 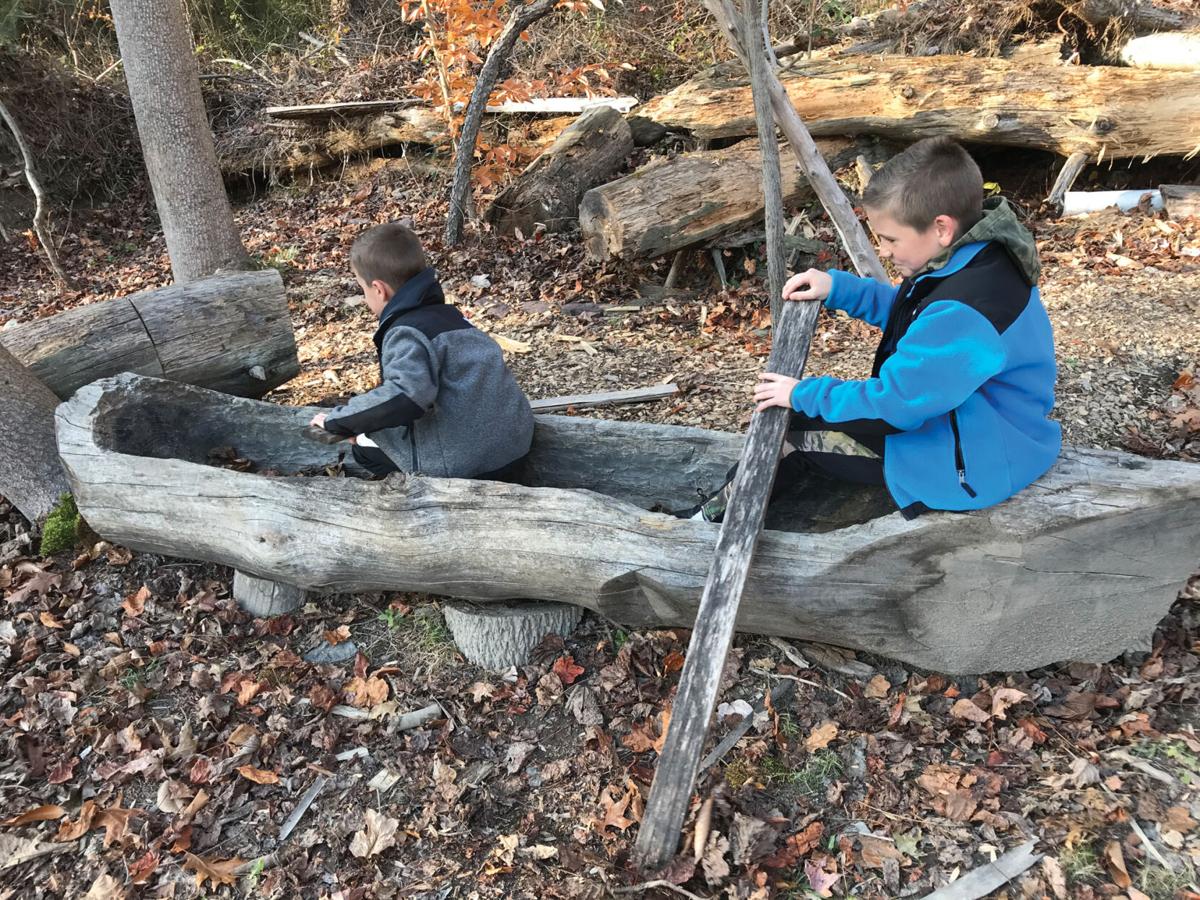 Cameron and Aidan Balchun immediately took to the Odyssey project boat, picked up conveniently placed and shaped wood pieces, and started working away.

Ten years ago Herrontown Woods was an almost impenetrable jungle. Today, thanks to Steve Hiltner and the Friends of Herrontown Woods, it is touted on Princeton’s Recreation website as among the best in the area for a moderate hiking adventure. With ticks pretty much inactivated by frost, now is a perfect time to enjoy the beauty and peaceful stillness of the trails throughout this impressive nature preserve.

As Hiltner likes to point out, Herrontown Woods is Princeton’s first open space preserve; it now has a dedicated volunteer group not to only oversee it but also to add attractions for all family members; and much of the credit for its spruced up trails goes to Kurt and Sally Tazelaar.

The wooded area is closing in on its centennial mark as a site to be enjoyed. It was, so to speak, civilized in the late 1930s by Oswald Veblen, a Princeton mathematics professor who went on to be a founder of the Institute for Advanced Study. Veblen and his wife, Elizabeth, settled in what is known as the Princeton Ridge. The Veblens slowly accumulated property and in seeking “to preserve a bit of land as closest to its natural form as possible” donated 81 acres to Mercer County in 1957. The gift was appraised at $154,000 (over $1.4 million in today’s dollars).

The gift created not only the first open space in Princeton but also in Mercer County. When asked why he chose to donate his property to the county rather than to the town, Veblen said he believed the county “was particularly well-fitted to handle this sort of thing.” He felt the state was too large and Princeton too small to care for and enhance the property.

The county was ecstatic. Then Freeholder Richard J. Coffee, in echoing Veblen’s wishes, enthused, “We envision a nature museum, a system of trails through the wooded areas, with trees and other plants labeled, a relaxation center for visitors, and lectures to provide opportunities for nature study. We will preserve the existing natural beauties, and enrich them with facilities which will promote the fullest measure of public enjoyment.”

Time was to show that Veblen, while generous, was too optimistic: None of the plans came through during his life and even decades after. Hints of inaction with regard to the care and maintenance of the woods were there almost from the beginning. The county had not set aside money for the task. Stuart Robson, the Princeton Township’s assessor at the time, commented that the donation meant the unfortunate loss of a tax assessment; in other words, no money for Princeton. And this being Princeton, one anonymous resident complained, “Who’s going to pay for the new park?”

There were no payments, but there were further land donations — not only to Herrontown Woods but also in the form of contiguous properties. The 77 acres forming the Autumn Hill Preserve was acquired by the Princeton Township Open Space Commission in the late 1960s. When Elizabeth Veblen died in 1974, the remaining Veblen acreage including the house was added to Herrontown Woods. The D&R Greenway saw to it that acreage from the All Saints woods now openly borders the Herrontown property and was also involved in recent acquisitions from the Windy Top development. Today, the entire preserved, open space — almost 600 acres — is often referred to as the Princeton Ridge East Conservation Area and is believed to be the largest contiguous property collection in Princeton. Herrontown Woods is the public core of the assemblage.

Obtaining property is one thing; maintaining it is another. In the decades following Veblen’s original gift, trees fell, weeds flourished, and trails disappeared with muddy water runoff taking their place. Enter Steve Hiltner.

Hiltner, a man of many talents — primarily professional jazz musician but also a botanist and naturalist among other skills — readily admits he had no idea of saving Herrontown Woods when he came to Princeton as a faculty spouse in 2003 (his wife is currently director of Princeton’s Program in Latin American Studies). What he wanted to save upon discovering the area, what he thought was rather magical, was the abandoned Veblen house and cottage that he found in the midst of the woods. That vista brought up memories of his childhood growing up in Williams Bay, a very small Wisconsin town on the shores of Lake Geneva, where his father was an astronomer at the Yerkes Observatory.

He recognized, however, that cleaning and reestablishing trails throughout the property was a top priority. And, in order to do so, it was necessary to get permission from the county to recruit volunteers and lead the effort. The county saw no problem in having volunteers rehabilitate the woods for hikers and walkers. Hiltner’s problem, at first, was recruitment. Finally, in 2013, the Tazelaars and others answered the call.

It has taken years, and efforts continue to this day, to clear trails and cover muddy areas not only through Herrontown Woods but also through the adjoining Autumn Hill preserve. “Kurt Tazelaar threw himself into this initial work,” Hiltner says. And adds, “He was also quite strict on obtaining the correct stones for river crossings. These stones had to be flat topped for stepping purposes.” Hiltner still remembers how exhausting it was to transport car loads of such stones and, under Kurt’s supervision, placing them not only across streams but also through muddy trail areas.

The year 2017 was a big one in that the Friends were established as a legal entity and also convinced Princeton to take over ownership of the woods from the county. Hiltner’s hours and hours of hard work brought about both accomplishments. With those goals in place, Hiltner was able to start implementing Veblen’s vision by establishing a Botanical Art Garden, filled with labeled native plants, and clearing the site as an event gathering place. Hiltner also began work on rehabilitating the Veblen dwellings.

As the woods opened up, the volunteers came. Among them Princeton’s 8th grade Girl Scout Troop. They spent hours giving (seeding native plants) and taking (weeding out invasive garlic mustard). Members also created signs for Veblen’s house and the Veblen cottage — noting here that Einstein walked the woods and often lunched with Veblen in the building.

Victorino Pineda — “a genius with a buzz saw” says Hiltner — has been crafting structures out of fallen trees in the woods. His work includes a welcoming arch to the botanical garden and a boardwalk over a particularly muddy area. Andrew Thornton has also been busy, transforming fallen tree trunks into benches and trail borders.

Under Hiltner’s leadership and dedication and that of others too numerous to name, Herrontown Woods now features enjoyable nature walks, lectures, event gatherings, and ever more attractions. The website gives information on its board, the events, and the history. Most appropriately for now, it also gives directions to an awesome place to walk off some excessive holiday dining.

The Boat in the Woods and the ‘Infamous Odyssey Project’

During this past Thanksgiving, my husband, son-in-law, and two grandsons — Aidan, 8 ½, and Cameron, 6 — hiked through the woods to release some energy prior to dinner. The boys loved Herrontown and were particularly intrigued by what appeared to be a canoe sculpted from a tree trunk.

They were not alone in their curiosity. Further research revealed that Hiltner, aware of the boat being stowed behind Princeton High School’s administrative wing, had received permission in July, 2020, to move it to Herrontown. When he discovered that it was part of what generations of Princeton High School graduates describe as “the Infamous Odyssey Project,” Hiltner asked English teacher Julie Dunham to provide the boat’s back story.

Dunham wrote: “Every year for nearly 20 years, freshmen have read and studied ‘The Odyssey.’ As a culminating project, students create their own projects that would demonstrate a personal connection to or appreciation for the text. … A group of young men wrote a proposal indicating … they wanted to build a boat that would show information from the journey. It was an interesting proposal, so I had no problem approving it.

“The one piece of information that was not in the proposal and that I did not think to question, was the size of the boat they wanted to construct. So, imagine my shock when I entered my classroom in December of that year and immediately smelled lumber! When I turned to the back of the room, I was stunned. There was this eight-foot ‘boat’ with a sail, reaching to the ceiling, that outlined Odysseus’ journey! The boat was carved from a log (which was not exactly authentic) but had an accurate tracing of Odysseus’ journey on the sail. Clearly, the group that created this boat had done research on the journey across the seas. They were very excited by their project! How they got that boat into my classroom is still a mystery, but I was told that one of their dads played a role in getting it to PHS.

“At the end of the year, the boat mysteriously found a new home in the back of PHS. I had told the students to make sure they ‘took it home’ before the end of the school year, and I assumed (wrongfully) that had occurred. It wasn’t until years later that I found out it was still on the property of PHS.”

Dunham concluded her description by writing, “I am thrilled that this project will find a new home!” Clearly, youngsters visiting Herrontown Woods heartily agree with that sentiment.