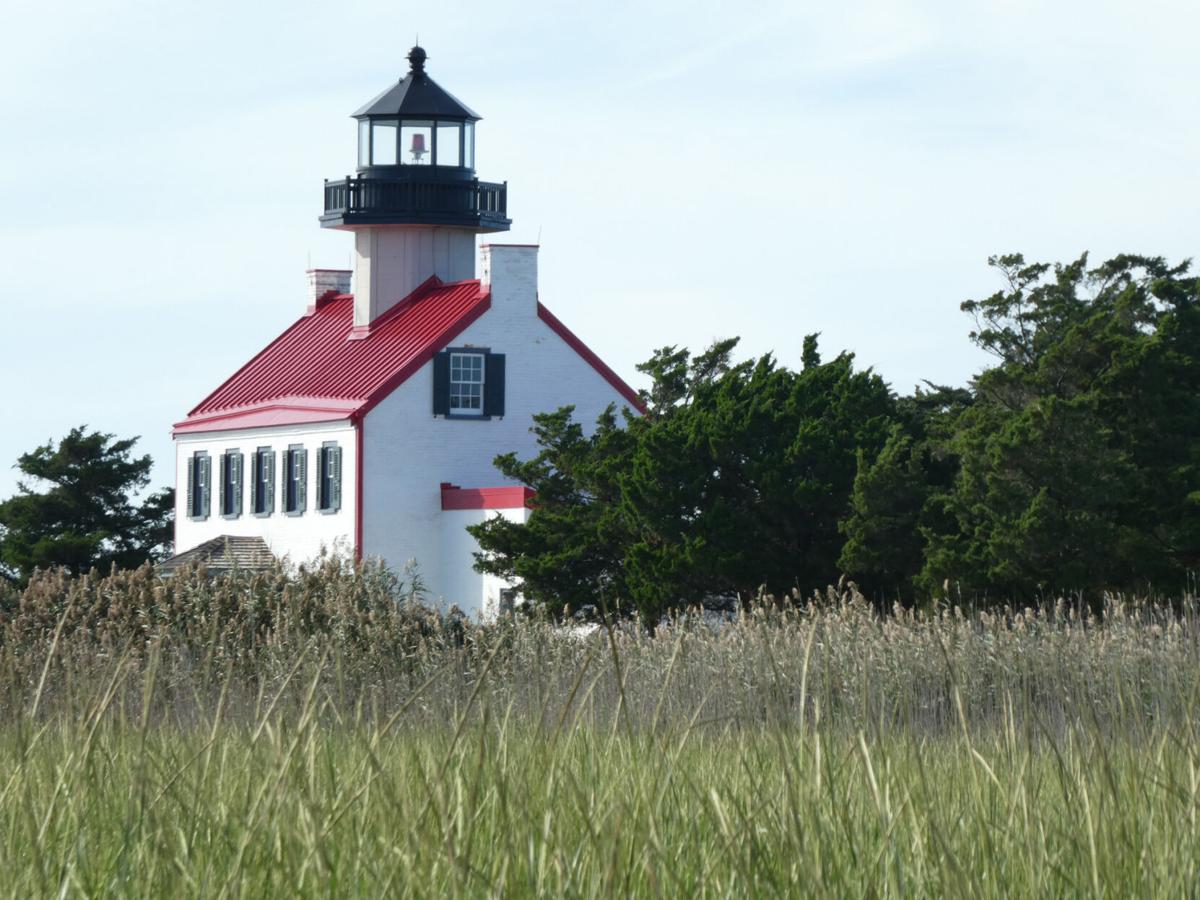 East Point Lighthouse in Cumberland County is an active navigational aid. Built in 1849, it is the only remaining land-based lighthouse on the Delaware Bay. 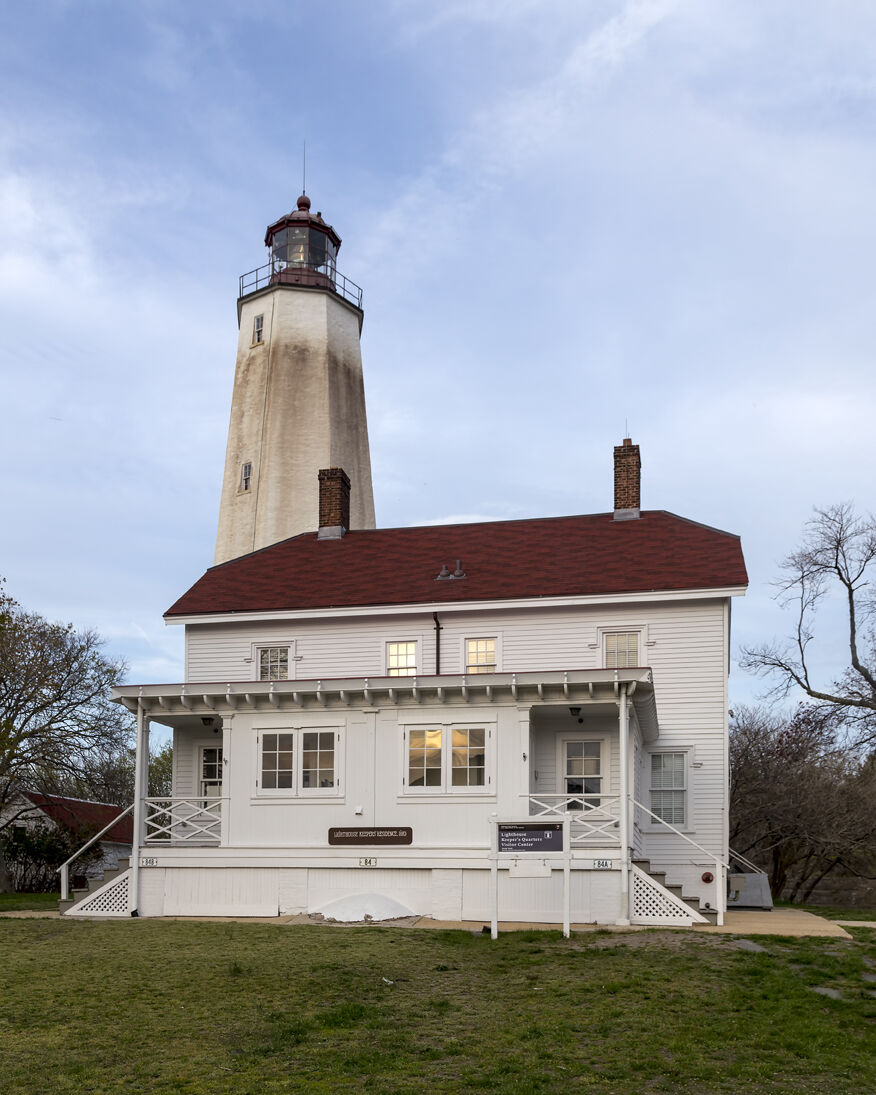 The Sandy Hook Lighthouse is the oldest operating lighthouse in the U.S. 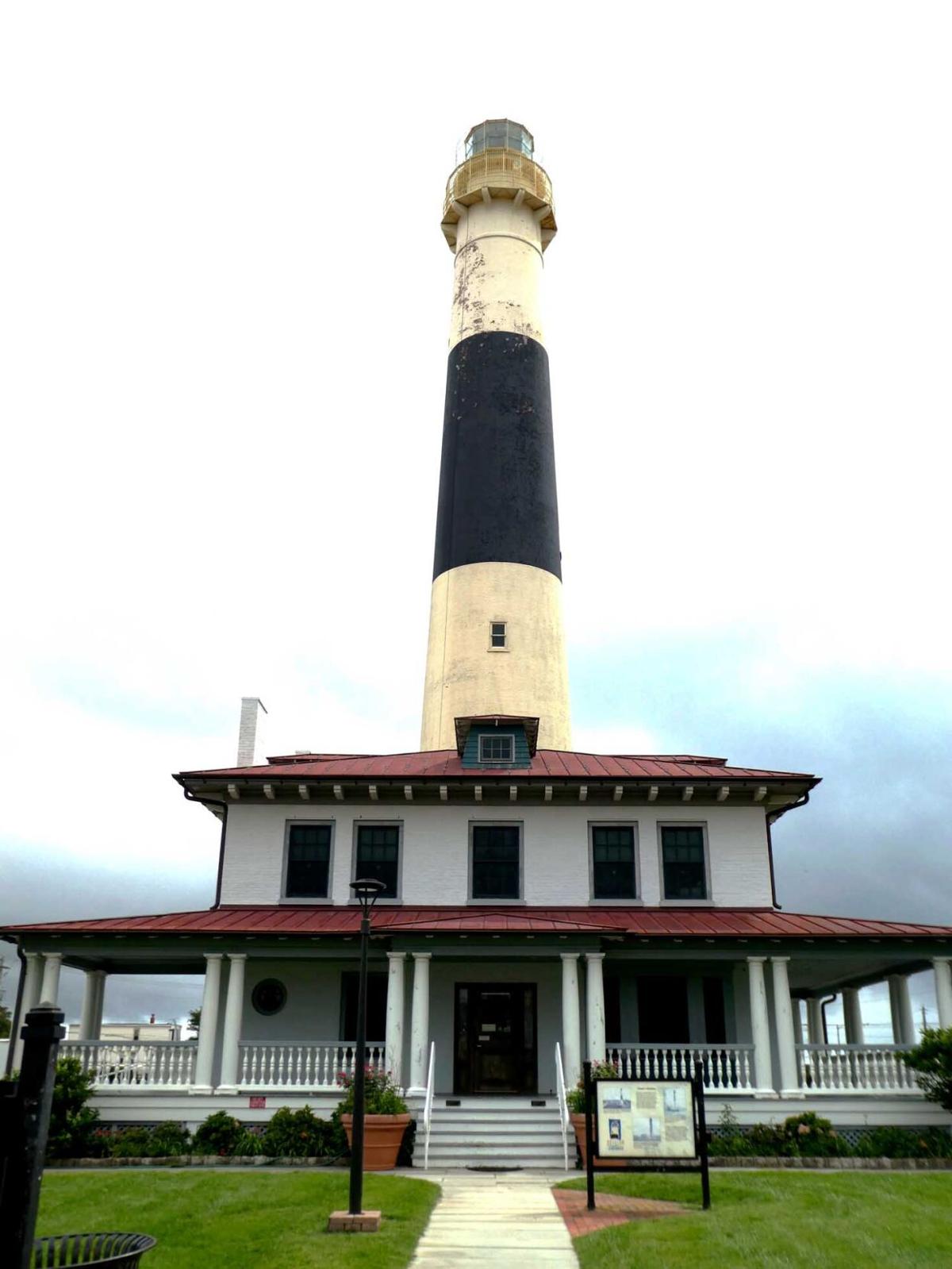 Absecon Lighthouse in Atlantic City began operating in 1857 and is the state’s tallest lighthouse at 171 feet tall. 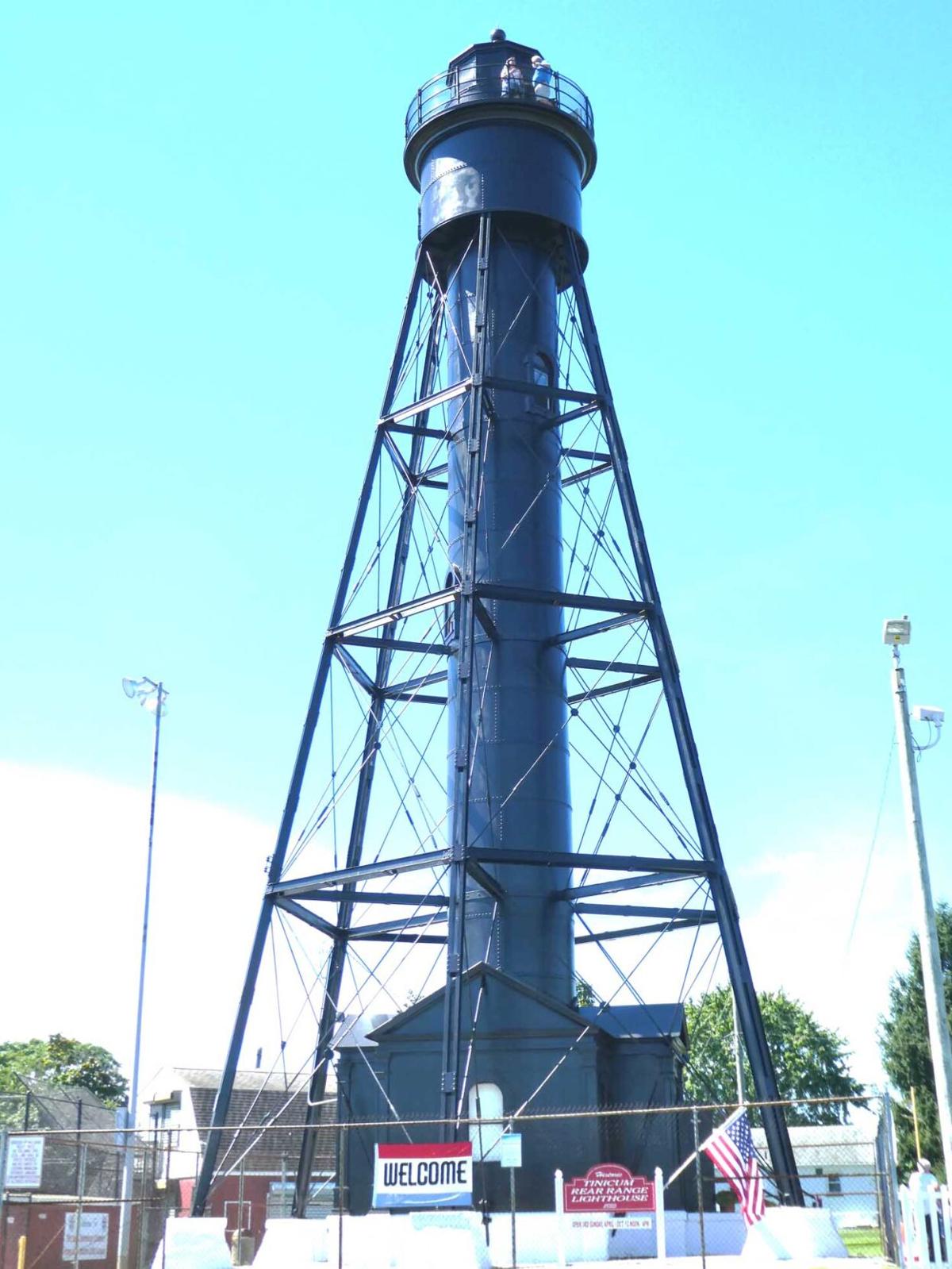 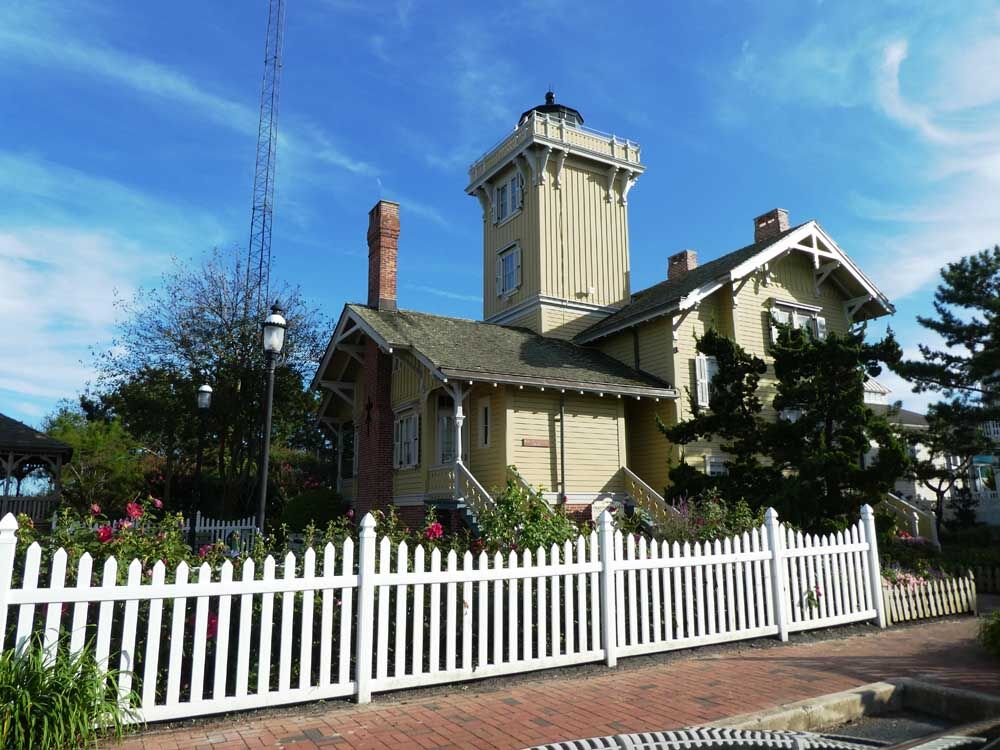 Hereford Inlet Lighthouse in North Wildwood, Cape May County, is a working lighthouse and museum.

The New Jersey Lighthouse Challenge — set for Saturday and Sunday, October 16 and 17 — is an annual event that mixes history and fundraising with a contest.

Created by the New Jersey Lighthouse Society to draw attention to the state’s substantial lighthouse history and maybe get some financial support in the process, the event features two days of 8 a.m. to 6 p.m. lighthouse tours, with some remaining open for evening visits.

Participation in the contest portion of the Lighthouse Challenge is simple. Visitors choosing to play can go to a self-selected lighthouse, purchase a challenge souvenir, and then attempt to visit ten land-based lighthouses, three lifesaving stations, one museum, one virtual site, and the Lighthouse Society of NJ site over the two-day weekend. The registration fee is $4 and includes participation in a $500 raffle.

Those only interested in visiting lighthouses can just show up or wait until another time. After all, many of them are open to visitors throughout the year.

Additionally, since many of the lighthouses offer a winter day’s diversion and a good family destination — as I discovered taking my son to all of the lighthouses and some of the stations — they’re worth considering as a day trip. But just remember that the pandemic still lingers, and check websites for schedule changes.

So let’s do a tour of the state’s lighthouses, moving from north to south down the New Jersey coast:

The Sandy Hook Lighthouse in Monmouth County is the oldest operating lighthouse in the United States. Located in the Gateway National Recreation Area in Atlantic Highlands and maintained by the U.S. Coast Guard, the 103-foot-tall structure has been in service since 1764.

A witness to history — including a takeover by the British during the Revolutionary War — the lighthouse takes visitors into another era. That includes climbing a ladder to the lens room.

As indicated by the ladder, the lighthouse works best for older children and spry adults. The lighthouse is generally open all year and tours are free. But there is a $15 entrance fee to the park between Memorial Day and Labor Day. nps.gov/gate/planyourvisit/sandy-hook-hours.html

Twin Lights in Atlantic Highlands, also in Monmouth County, is a brownstone double lighthouse structure built in 1862 on the site of a former one built in 1828. Located at the top of a hill, the lighthouse’s two medieval-style towers treat visitors with a commanding view of the Atlantic Ocean to one side and an opportunity to see New York City across New York Harbor from the other.

Operated by the Twin Lights Historical Society, the site is open all year and a $5 adult or $2 child tickets allows visitors to climb both towers.

It is an easy visit in just about every way. And since designers used the hill for height, it is a short stair walk to the top of the tower. Visitors in December may also get a glimpse of a Christmas tree in one of the towers. www.twinlightslighthouse.com

Sea Girt Lighthouse in Sea Girt, again in Monmouth County, is a Victorian house-like structure with a revolving Fresnel lens at the top.

It began operating in 1896 as a navigation point between Twin Lights and Barnegat Light on Long Beach Island. Decommissioned in 1945, the lighthouse is operated by the Sea Girt Lighthouse Citizens Committee and provides free entrance mid-April through mid-November. While traffic and parking may be problematic during the summer, an off-season visit makes for an easier visit to this museum-like recreation of a bygone era. www.seagirtlighthouse.com

Squan Beach Life Saving Station in Manasquan is the Dutch-styled station built in 1902 to house equipment and staff to rescue shipwreck victims. Later a U.S. Coast Guard Station, it was decommissioned in 1999 and sold for $1 to Manasquan Borough. It opened as a museum in 2012. manasquanlifesavingstation.wordpress.com

Tucker’s Island Lighthouse at the Tuckerton Seaport in Tuckerton, Ocean County, is the recreation of the lighthouse that fell to sea in 1927. It is one of the main attractions of this maritime village in what was once an important New Jersey port town.

In addition to the lighthouse and its display galleries, 14 other buildings and stations offer exhibitions and the opportunity to watch decoy carvers and boat builders. Admission is $5.

It’s an easy and engaging way to connect with the state’s maritime history. www.tuckertonseaport.org

Barnegat Lighthouse, located at Barnegat Light on Long Beach Island in Ocean County, was lit in 1859 to help shippers navigate past dangerous shoals and sandbars.

One of the three federally built cylindrical lighthouses engineered by George Meade, “Old Barney” has 217 steps to the top.

An interpretive center provides visitors with information about the building’s history and to get a view from the top of the tower via camera.

The lighthouse is open all year and free, except between Memorial and Labor Day when the admission free ranges from $1 to $3.

Children and adults will rise to the challenge of climbing to the top, where the reward is a sky-high panoramic view of the region. www.state.nj.us/dep/parksandforests/parks/barnlig.html#barnlight

Absecon Lighthouse in Atlantic City, Atlantic County, began operating in 1857. It is the state’s tallest lighthouse at 171 feet tall, and its original Fresnel lens remains.

Absecon Light is open all year and climbing fees range from $3 to $8, with the last climb a half-hour before closing.

It is a beautifully restored building and interpretive center. Its 228 steps provide visitors with one of the best views of one of New Jersey’s most famous seaside cities. www.abseconlighthouse.org

U.S. Life Saving Station 30 in Ocean City is a newer addition to the lighthouse challenge and the state. The 1883 Carpenter Gothic Style building designed by architect James Lake Parkinson, who created similar structures at Cape Hatteras and Cape Fear in North Carolina, is one of the few remaining examples in the county. Now a museum, it features free exhibitions of artifacts and images. Mainly open during the summer, winter appointments are also available. uslifesavingstation30.com

The Tatham Lifesaving Station, located in Stone Harbor, is an 1895 structure featuring murals and displays recognizing life saving services and a tower that overlooks the ocean and Hereford Inlet. Operated by the Stephen C. Ludlam Post 331 of the American Legion, it offers free guided tours mainly in the summer. stephencludlampost331.org

Hereford Inlet Lighthouse in North Wildwood, Cape May County, is a working lighthouse and museum.

Built in 1874, the lighthouse is maintained by the United States Coast Guard as an active navigational aid.

With the light on the upper floor, the house was also a home, and visitors can walk through its decorated rooms and imagine how its former occupants lived. A visit to the house’s Victorian-style garden with more than 200 varieties of plants helps set the mood further. It is open year round and admission is free.

Overall it is an easy and pleasant trip to the past. www.herefordinletlighthouse.com

Cape May Lighthouse is located in the southernmost tip of the state in Cape May town and county and overlooks the Atlantic Ocean and the Delaware Bay.

Another of Meade’s federally funded trio of cylindrical lighthouses, it was built in 1859 on the site of two other former lighthouses.

Located in Cape May Point State Park, it is part of several attractions and has a visitors’ center. But the main attraction is the 199 steps to the top of the tower to take in the sights.

Originally operated by the United States Coast Guard, it became the property of the State of New Jersey in 1992. It is now leased to the Mid Atlantic Center for the Arts, which raises funds to preserve and maintain the building and in 1994 had the tower painted to its original coloring: light beige with a red top.

The park is generally open sunrise to sunset. Lighthouse hours for climbing vary with the season and are posted on the lighthouse website. Climbing fees range from $5 to $10.

It is a fun stop that includes both a major lighthouse as well as the opportunity to see a World War II lookout tower and visit a nature museum. www.capemaymac.org/cape-may-lighthouse

Now heading north along the Delaware Bay and River:

East Point Lighthouse in Heislerville in Cumberland County is an active navigational aid. Built in 1849, the two-story brick Cape Cod-styled building is the second oldest New Jersey lighthouse and the only remaining land-based lighthouse on the Delaware Bay.

The lighthouse was operated by various entities including the U.S. Coast Guard, which extinguished the light in 1941. In 1956 the property was transferred to the State of New Jersey. The building suffered from neglect until the community-run Maurice River Historical Society formed and saved the structure through local fundraising efforts. The group also worked with the U.S. Coast Guard to reinstall the beacon light and return the lighthouse to an active lighthouse.

The lighthouse is open throughout the year, but it is best to check its Facebook page before venturing out. Admission ranges from $2 to $5.

With rooms fully furnished and cared for, it is a pleasurable trip to the past. However, the bay area is home of both greenhead flies and swarms of mosquitoes — so be ready to run. www.facebook.com/eastpointlight

Initiated by the federal government and opened for operation respectively in 1877 and 1880, both structures use a black metal cylindrical casing that holds a spiral metal staircase and painted tongue-in-groove wood walls that lead to the light tower and provide panoramic views of the region.

Both were decommissioned and eventually saved by community groups that continue to support them.

The 115-foot-tall Finns Point is open every third Sunday from March through May and September through November, weather permitting. Part of the Supawna Meadows National Wildlife Refuge, the lighthouse offers free admission but requests donations. www.njlhs.org/njlight/finnpoint.html or www.friendsofsupawnarefuge.org

Tinicum Lighthouse, an 85-foot-tall structure owned by the U.S. Coast Guard, is open April through October on the third full weekend of each month from noon to 4 p.m. The Tinicum Rear Range Lighthouse Society at Paulsboro operates the structure and requests donations for visitors to climb.

These bulky metal towers are markedly different from the usual brick or wood lighthouse, but their intriguing mixture of 19th-century engineering and interior design makes one think of Victorian-era science fiction — best reflected in the term Steampunk — and the structures must have been daringly modern for their time.

While the recently restored Tinicum is bright, Finns Point shows its wear and tear. But both provide expansive views, with Tinicum giving visitors the opportunity to gaze at the Philadelphia skyline.

The trip to the remote Finns Point can be enhanced by a stop at nearby the state owned Fort Mott, built to protect the river during the Spanish-American War. www.tinicumrearrangelighthouse.org

As noted at the start, it advisable to check the New Jersey Lighthouse Society website as well as each for changes.

Currently, the State of New Jersey-owned Barnegat Light is closed for some minor interior repairs, and the National Park Service owned Sandy Hook and Finns Point lighthouses will only have their grounds open. But that could change.

But Lighthouse Challenge or not, the state’s lighthouses are worth a visit and offer a quick day trip to both the New Jersey coast as well as a chance to slip into another era.

For more information on the New Jersey Lighthouse Challenge or the state’s lighthouses: www.lhchallengenj.org or www.njlhs.org.