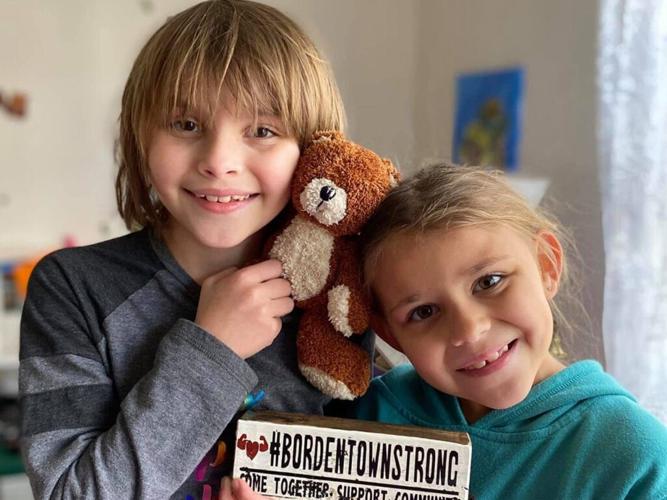 Andi and Nicki Sano of Bordentown City show off the #BordentownStrong sign being sold for $20 to benefit area businesses impacted by the ongoing COVID-19 crisis. 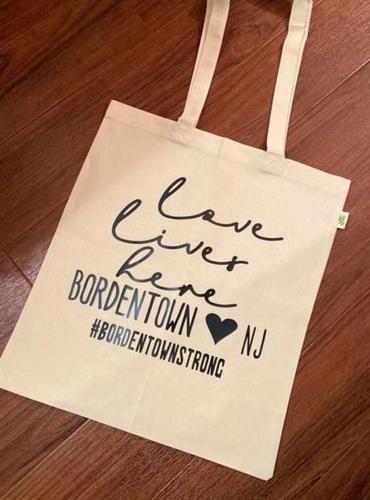 The #BordentownStrong tote bag is $12. 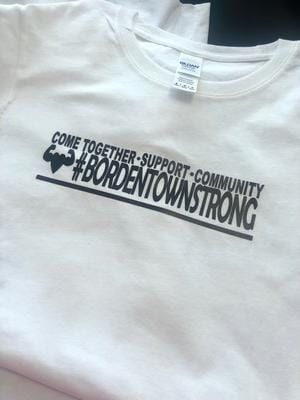 The $20 #BordentownStrong t-shirt is available for pre-order.

A group of local residents passionate about small business interests have banded together to form the #BordentownStrong effort to raise funds for business owners and their employees in the city and township areas that have been affected by the onset of the Covid-19 crisis.

Many small business owners were forced to close their doors while others have greatly altered their operations to cater to the needs of their customers during this time and manage to stay afloat.

Bordentown City resident and native Rebecca Collins first came up with the idea to use her ability as a maker to help small businesses while giving people something in return. By recruiting the help of local business owner, Sarah McEwan, and co-chair of the Bordentown City Creative Team, Sruti Desai, her idea was cultivated into action.

By selling signs, t-shirts and tote bags featuring the #BordentownStrong logo, the trio donates a portion of the proceeds per item towards the GoFundMe page they created on March 30. The current breakdown of donated percentages are: 30% of the purchase price for the signs and t-shirts and 40% of the tote bags. This allows for the makers’ costs to be covered and a significant donation to the fund.

As a local maker, Collins’ business, Carson Re-Creations features her Bordentown inspired designs on things like signs, pillows and glassware. With additions of the 08505 ZIP code, the name Bordentown or city history somehow incorporated, Collins has been spreading Bordentown pride well before the coronavirus outbreak.

Coming up with #BordentownStrong, she wanted to see if it could be used to benefit the other local businesses in town.

Collins originally approached Desai, a Bordentown City resident, early on about her idea to help out local business. Both Collins and McEwan volunteer for the Bordentown City Creative Team, while Desai is co-chair.

The creative team strives to increase the creative potential in a community by supporting local business, stimulating job growth and forming a network of artists. Despite the trio’s common relationship to the creative team in the city, they said they all feel that their #BordentownStrong efforts should help all those in the city and township areas.

“We all feel like the city and township should be working together as one, and we should be supporting residents that live in the township because they are the ones that patronize our downtown,” Desai said.

Desai’s professional background in marketing and business development—and her feeling that her job isn’t fully accomplished without a sense of community—made for a perfect logistical addition to the #BordentownStrong initiative.

Although the three Bordentown residents are involved in the Bordentown City Creative Team, the team remains a purely promotional arm—sharing information on social media about #BordentownStrong and pointing people with questions to the startup.

“They wanted to do something to help,” said McEwan, a Bordentown City native, about Desai and Collins reaching out to her about the initiative.

For #BordentownStrong, the tote bags ($12) are being produced in house by McEwan while Collins makes the signs ($20), with the enlisted  of her parents, who live in town, and a neighbor. The t-shirts ($20)are a recent addition and can be pre-ordered at this time.

Jamie Clugsten, owner of Always In Stitches on Farnsworth Avenue, was asked by the trio to help by contributing t-shirts that she can screen print.

Clugsten had just opened her store about a month prior to the COVID-19 outbreak and said he enjoys getting involved with community-driven initiatives. Some may think a t-shirt can’t help, but so many events—such as fundraisers or group activities—will have coordinating shirts to unify a cause. The current situation local Bordentown business is in, is no exception.

“My feeling is we’re all feeling the crunch, but I think if we all shoulder the burden a little bit, it’s a little bit lighter of a load. That’s my thought on it,” Clugsten said. “Everybody’s feeling it but we all still have to contribute.”

Moving forward, the group is hoping to work with other local small business owners and add some different products to their project.

“That’s another part of this, trying to keep the makers who are working doing something,” McEwan said.

As of the beginning of April, more than $1,200 has been raised on the #BordentownStrong GoFundMe from direct donations and product sales.

“I think it’s amazing just that people want to support,” Collins said. “People love the Bordentown community and they want to support it at all costs if they can.”

By using social media and McEwan’s local business’s website to organize the #BordentownStrong into a functioning outfit, the group seeks to help out as many businesses as possible, even if it’s in a small way.

McEwan’s Bordentown business, Mimosa Goods on Farnsworth Avenue normally has a studio space for classes and workshops while also selling and representing local makers and artists’ products in the store—including those from Carson Re-Creations.

Mimosa Goods has moved completely online due to the current situation and features a specially made page on its site for #BordentownStrong product sales and a financial relief form for businesses in need.

Product sales for #BordentownStrong are made through the Mimosa Goods site, cleared through the business’s bank account and added to the GoFundMe page under a “Mimosa Goods” title.

The Google form is for small local business owners, employees of local business, or independent contractors or gig workers affiliated with a local business who are experiencing financial hardships. The form asks for business information including a monetary request and reason for the request, such as operational bills, personal costs or utilities.

Currently the form is only featured on the dedicated Mimosa Goods webpage. Once a comprehensive contact list for local businesses is formed, which is being worked on by a town committee, the group intends to send it out to those in need.

Requests will be reviewed only by the three members of #BordentownStrong. Requests from $0 to $500 are allowed by the form, although it is clearly stated that the full amount requested may not be met depending on how much funding the group has at that time.

To protect the privacy of those who request funds, the amount gifted will be recorded on the official GoFundMe page but the name of the business or individual will only be known by the trio.

As of yet, no funds have been distributed. The plan is to withdraw needed funds from the GoFundMe account and privately deliver it via check or PayPal.

“As a business owner, we have a tremendous amount of local pride and it’s been really amazing to see people not only want to help and give a donation but just to have a sense of community unity that we’re all in this together and that we’re supporting each other,” McEwan said. “So to have the hashtag, I hope that we can keep it going and continue to use these kinds of products to donate back to community efforts even when this is over.”