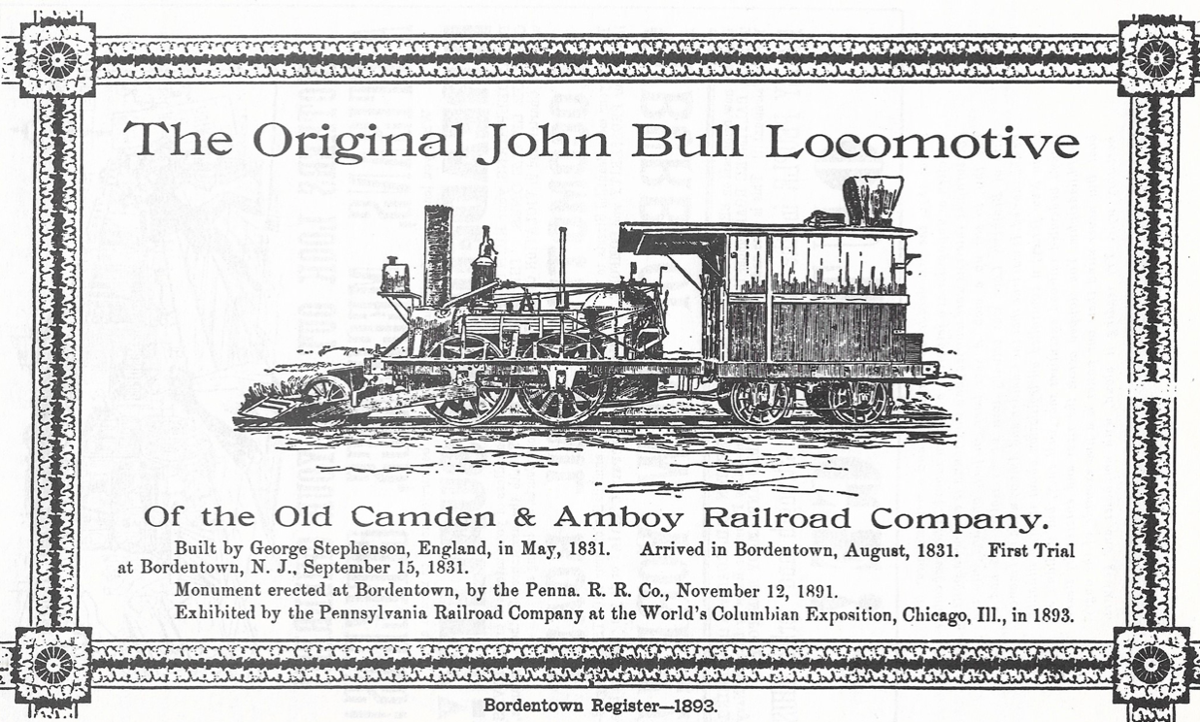 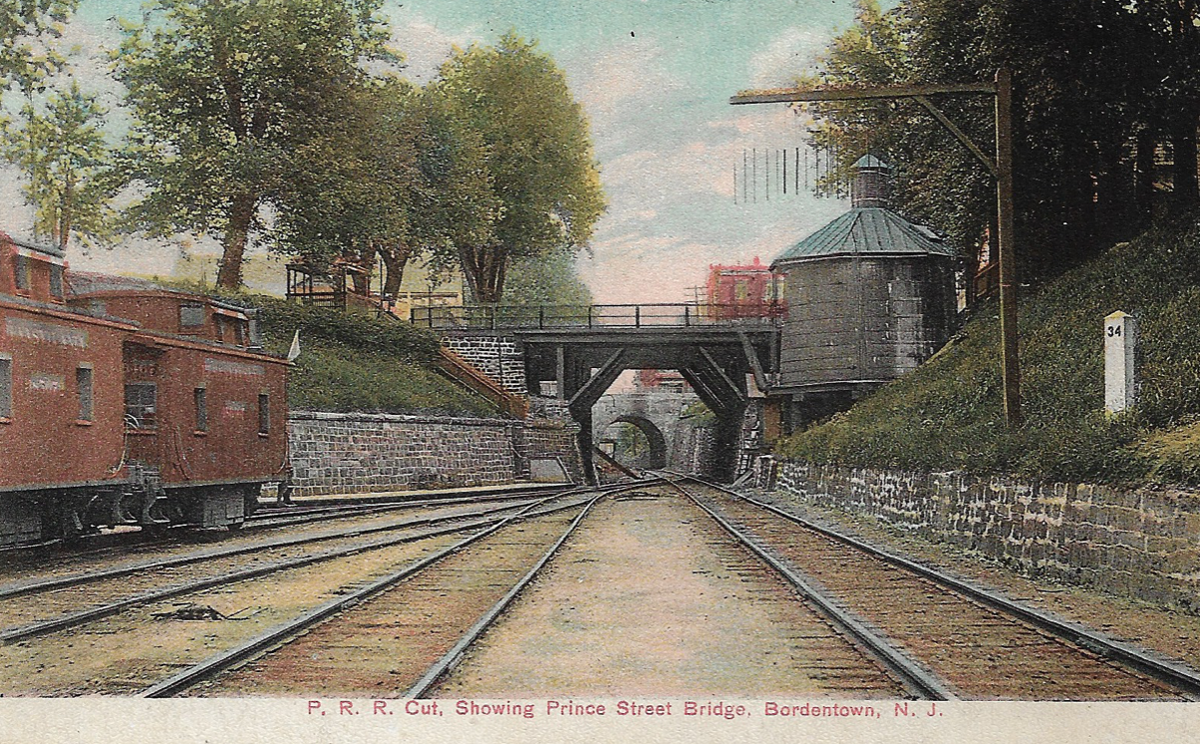 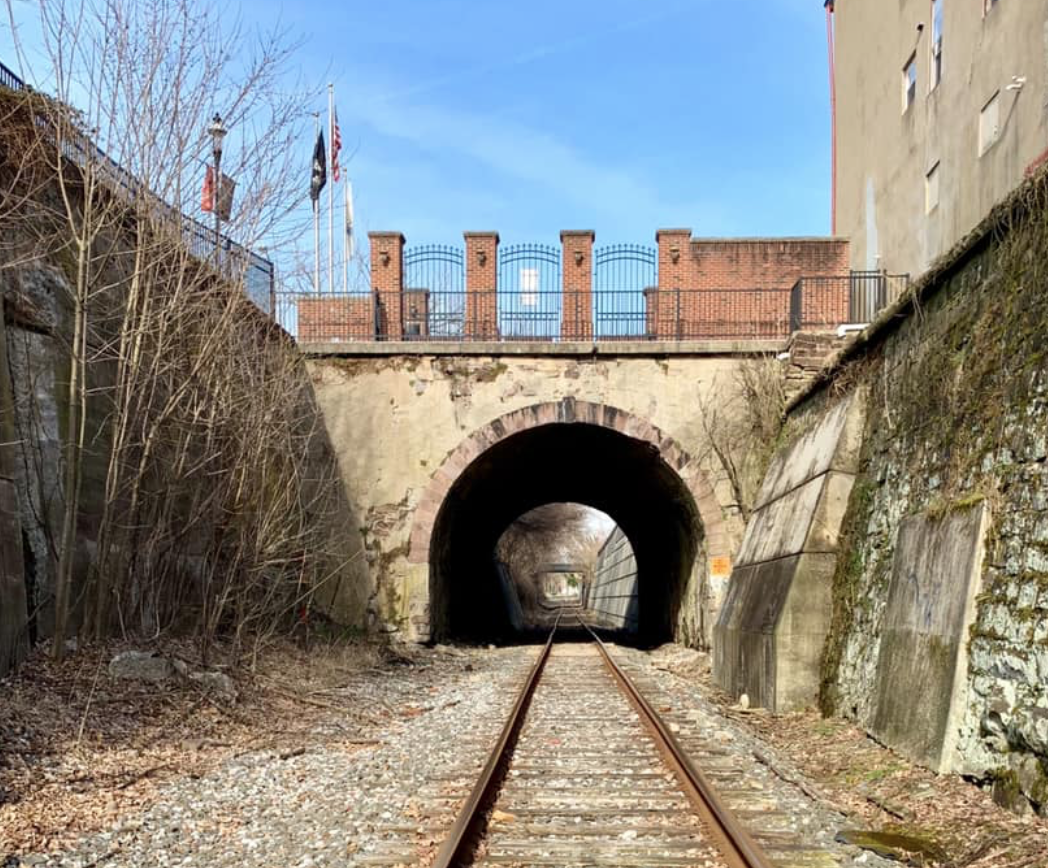 The stone arch bridge in Bordentown City—and the veterans memorial that sits on top of it—is set for demolition by the state Department of Transportation. 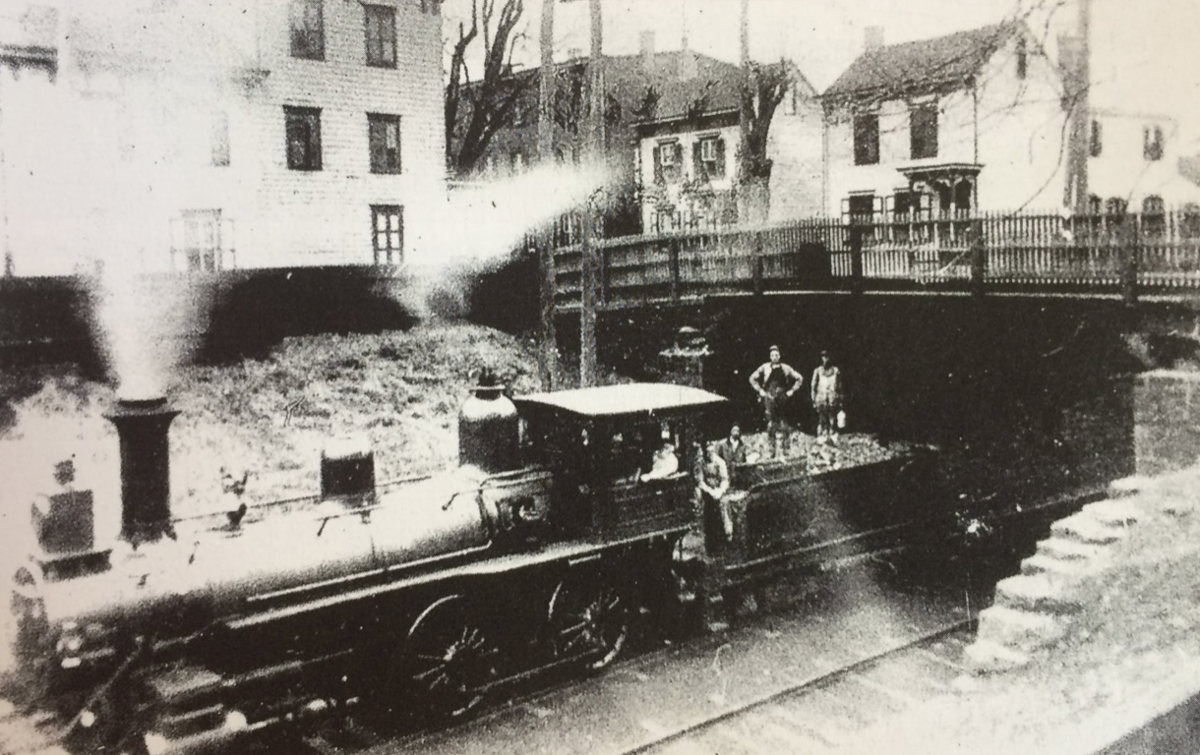 The conservation of one of Bordentown City’s most prominent historic sites—the Joseph Bonaparte estate—has made headlines from the Philadelphia Inquirer to the New York Times (and the Current, too). But some local preservationists have their sights set on another landmark in the city.

Under the city, too.

The Farnsworth Avenue Stone Arch Carriage Bridge and Tunnel was slated to be replaced based on a plan proposed by the New Jersey Department of Transportation. The state cites shortcomings, including missing stones, water leakage, cracked and bulging walls, voids and scaling. The tunnel’s inadequate vertical clearance, the state said, renders it functionally obsolete.

But residents and historians argue that the site, which dates back to the 1830s, should instead be preserved and restored.

“The state says it’s falling apart, but others say it’s not,” said Doug Kiovsky, vice president of the Bordentown Historical Society. “If anything, it should be rehabilitated, not destroyed. Once you do that, that’s history. That’s it.”

The Farnsworth Avenue bridge is the oldest carriage bridge constructed over modern railroad tracks made of rolled iron and inverted T-rails, wrote local train enthusiast Pierre Lacombe in a letter to the Department of Transportation. It dates back to the Camden & Amboy Railroad, the state’s first permanent railroad and one of the first in the country. The bridge and tunnel is the largest manmade structure along the entirety of the C&A corridor.

“It’s a significant bridge,” Kiovsky said. “It’s kind of like a bookend. The John Bull locomotive went right under that tunnel. This was the first tunnel that the John Bull ever went under. Where’s the John Bull now? In the Smithsonian.”

The state proposed tearing down the existing structure and replacing it with a prefabricated archway in 2019. The plans also affect the veterans memorial that sits on top of the bridge, at the corner of Farnsworth Avenue and Railroad Avenue.

Under the state’s proposal, the memorial would be removed, stored and replaced with a new structure, said Stephanie Corbo-Pecht, a longtime Bordentown resident and member of the Bordentown City Veterans Memorial Committee.

“The artist’s rendering of the new design was representative of something you’d find in Bucks County, loaded with fieldstone as if it was built in 1700,” she said. “It was definitely not representative of the brick facade of the rest of Bordentown City. The possibility also existed that, because it would be the last stage of the project, the memorial would wind up not being replaced because of time or budgetary restraints.”

“That is the first bridge on Earth to have modern rail put underneath it,” Lacombe said.

And the reason the tracks go under the bridge instead of on top of it—like many historical finds in town—can be traced back to Joseph Bonaparte.

Robert Stevens, the president of the C&A Railroad, envisioned the line traveling over Black Creek, curving along the shoreline of Crosswicks Creek, snaking up Thornton Creek, then gently ride and end up behind what used to be the Ocean Spray plant.

“It would have been so much easier to cut a notch on the flanks of Crosswicks Creek and a notch going up Thornton Creek rather than digging that huge tunnel,” Lacombe, a Florence resident and former geologist, said.

But that would have ended up on the far side of the pond located on the Bonaparte estate. Bonaparte objected to the plans—a trained lawyer with plenty of resources, he ended up suing the Camden & Amboy Railroad over their use of eminent domain. The agreement wasn’t for property being used by the state for the state, but a private entity for a private entity.

“He fought them by saying it was all just for profit,” Lacombe said. “[C&A] realized they were going to lose in court, so they settled. The settlement was—bingo. ‘Dig a trench through the center of Bordentown, and I’ll let you go across my property at Thornton Creek.”

After Lacombe learned about the DOT’s plans two years ago, he prepared a 68-page report outlining the historical significance of the site.

“I’m not a bridge engineer more than I’m anything else, but after reading engineering reports for so long, after a while, it was not really correct,” he said. “If I put together a critique of it, they’re not going to listen. However, if I lay out the scientific reasons why I think the facility should be considered a historical site, they can’t say, ‘Nobody told us. We didn’t know.’ They can’t use that as an excuse.”

Its original keystone marker, still intact, is dated 1831, and the original stone sleepers are still present around the tracks. Graffiti that goes back to the 1800s—likely the initials of the men who built the structure—can be found on the tunnel walls.

Another stone sleeper, he said, was used by a group of government officials, academics and shipping industry professionals to determine the depth of the Delaware River after the Civil War—”all those issues that are important for navigation and transportation,” Lacombe said. They got together at the Navy base at Sandy Hook in 1883 and monitored sea levels consistently over five years.

“The benchmark down on the monument states that this place is 38.96 feet above the mean sea level at Sandy Hook,” Lacombe said. “Only one other was found, in Phillipsburg. It’s pretty neat.”

But these artifacts—and the structure itself—are just a slice of the whole C&A pie.

“The whole Camden & Amboy corridor is a historical site,” Lacombe said. “It’s accepted as being the first major railroad in New Jersey.”

And Kiovsky thinks that could be a big draw to Bordentown in the future—the 200th anniversary of railroading in New Jersey is 10 years down the line. He’d like to see the bridge become part of a rail trail or steam ride, similar to the locomotive in New Hope.

“To have something significant like the railroad bridge nominated and saved would help us out from a railroaders standpoint,” he said. “We’re not an Altoona. We’re not a Scranton. But we have some significance in that we have this old bridge that Scranton or Altoona may not have. You’d be very hard-pressed to find any railroad bridge in the United States that says 1831 or older.”

He also added that he’s found items like original 1830s railroad spikes while out and working on something unrelated to the bridge. Visitors can compare the original rails to modern ones. There are scrape marks on the tunnel from old rail cars that outgrew the space.

The historical significance is there, he said. The state just needs to recognize it.

“It’s the largest manmade structure along the Camden & Amboy Railroad,” Kiovsky said. “I hope it’s still up in 10 years.”