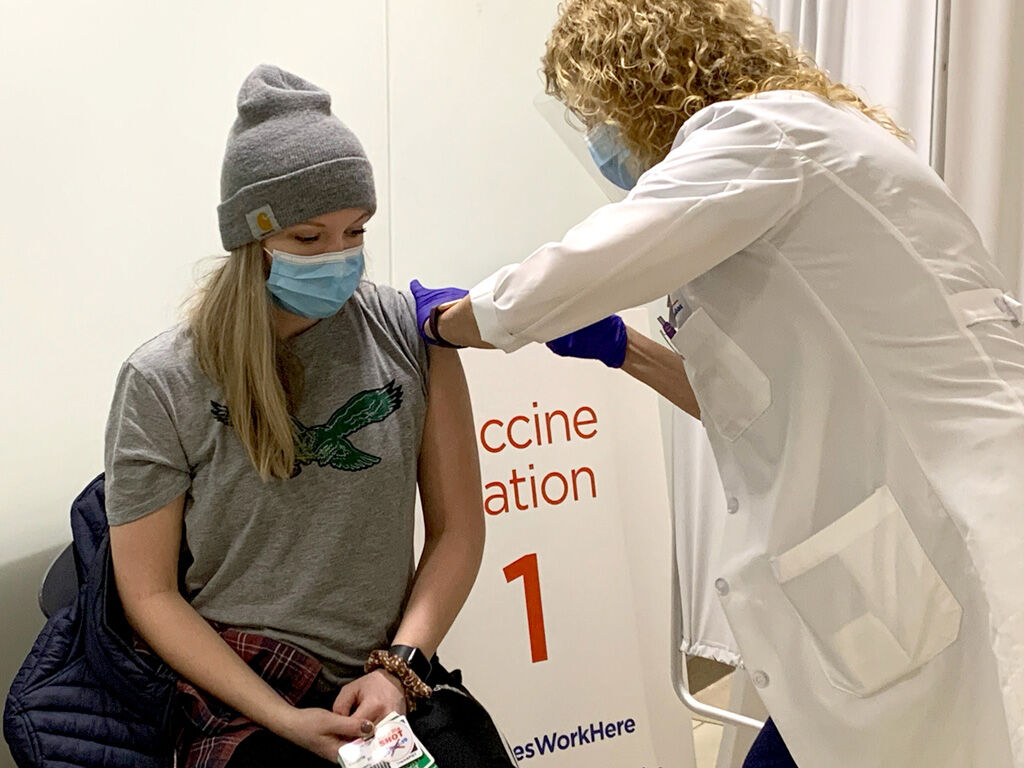 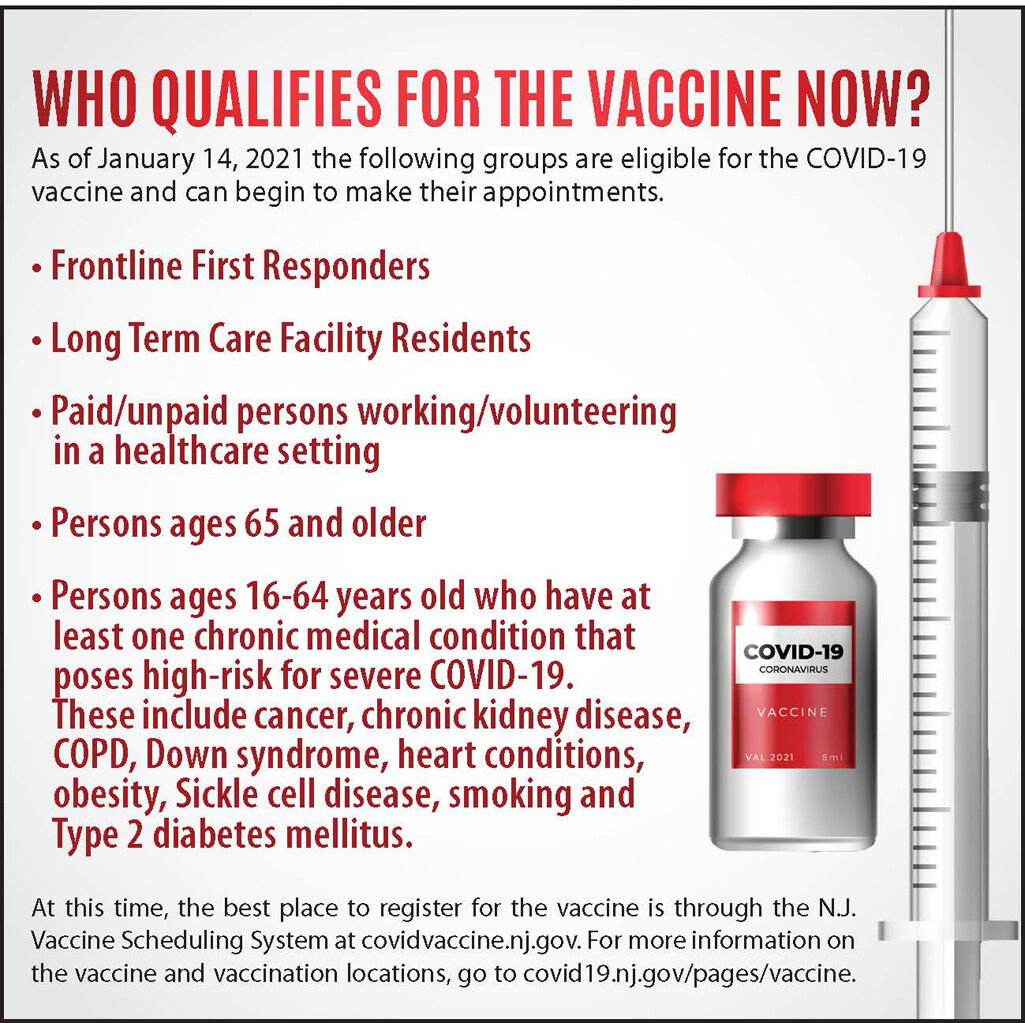 As the COVID-19 pandemic continues to rage throughout the United States, the demand for vaccines is dwarfing the supply being shipped to all 50 states.

As a result, there are few vaccination appointments available, and when they do open up at vaccination sites, slots are often booked up within hours or less.

People have been left confused and frustrated—wondering how, when and where they will get inoculated.

In New Jersey, the vaccine was first made available to healthcare workers, first responders and staff and residents of long-term care facilities starting in mid-December.

Then at the beginning of January, the Trump Administration announced that it was releasing the stockpile of vaccines it was holding to ensure people would be able to get the required second dose.

A few days later, on Jan. 14, New Jersey Gov. Phil Murphy opened up vaccinations to people ages 65 and older, and those with high-risk medical conditions.

It was subsequently revealed there was no stockpile of vaccines, and that the second doses had already been released at the end of December.

This exacerbated the problem—an even larger pool of people were left seeking vaccinations, but the anticipated increase in supply never occurred.

This resulted in a severe shortage in appointments available for qualified individuals. (For information on who currently qualifies to get the vaccine, see the graphic below.)

Currently, there are three ways for qualified individuals to make an appointment.

To start, all people should register with the N.J. Vaccine Scheduling System (covidvaccine.nj.gov).

They will be emailed an invitation to schedule an appointment when they are eligible and slots open up. The state has also set up an NJVSS call center to assist individuals, including those with no computers, in pre-registering and scheduling a COVID-19 vaccine appointment. For assistance call (855) 568-0545.

The second is to make an appointment directly with one of the many designated vaccination sites across the state.

In Mercer County, these include:

Other nearby sites include:

For a full list of vaccination sites in New Jersey and contact information, go to covid19.nj.gov/pages/vaccine. Due to the high demand, there is a high likelihood that the sites on this list will be fully booked.

Finally, select healthcare facilities, including many hospitals, are offering vaccines directly to their workers. Anyone who works at one of these facilities should contact their employer to learn if the vaccine is available there.

State officials on Jan. 27 released information to residents who are concerned about whether they will be able to their second dose of vaccine dose in a timely manner, given the ongoing shortage.

According to the state Department of Health, anyone who made an appointment for a first dose through the NJVSS will receive an email with the details of their automatically scheduled second-dose appointment by the end of day on Saturday, Jan. 30.

Those who received their first dose by booking an appointment directly with a vaccine clinic, and who did not use the NJVSS, should have scheduled a second-dose appointment at the time of their first appointment.

“If you did not receive a second-dose appointment at the time of receiving your first dose, you need to contact that vaccination site for assistance,” stated a news release.

It is recommended that individuals get their second dose as close to the recommended date as possible. For the Pfizer vaccine, it’s 21 days after the first dose, and for the Moderna, it’s 28 days after first dose.

This is about half the overall doses that have been received by the state. The rest were delivered to commercial entities for distribution, such as pharmacies like CVS and Walgreens,

Gov. Murphy told CNBC on Jan. 20 that that part of the vaccine rollout has been problematic.

“They basically amassed these doses, they schedule visits to long-term care nursing homes, extended living, and they’re punching under their weight, particularly Walgreens, and that’s where most of the yet to be used doses are,” Murphy told CNBC.

He added that the companies should “put more bodies on the case” to increase vaccinations.

Meanwhile, for several reasons, Mercer County sat near the bottom of the state in the number of people vaccinated by the end of January.

The state of New Jersey reported on its COVID-19 Information Hub that as of mid-day Jan. 24, Mercer County had vaccinated 13,587 people.

By comparison, neighboring Burlington and Middlesex counties had vaccinated roughly twice as many people overall.

Bergen was the county with highest number in the state, with 61,261 vaccinations as of Jan. 24.

Mercer County Executive Brian Hughes said that part of the problem with rolling out vaccinations was that fact that there is no county department of health in Mercer. Health departments in the county are run by each of the municipalities, some of which contract with other towns.

Hughes said vaccine deployment in Mercer County has been a collaborative effort between the Mercer County Division of Public Health, the County Health Officers Association, Capital Health System and a number of other entities (such as the nursing school at Mercer County Community College).

“While it might seem like Mercer was lagging, many Mercer towns conducted their own vaccine clinics based on the capacity they could manage, and only for people who met the 1A category, including their local police, fire and EMTs,” Hughes said in an email.

In a video posted to YouTube on Jan. 21, Hamilton Mayor Jeff Martin spoke about the vaccine situation.

He said that starting at the end of December, Hamilton teamed up with the other towns in Mercer County to create “points of distribution, or PODs.”

The PODs were closed to the general public, and the initial priority was to vaccinate healthcare workers and first responders (firefighters, EMS and police).

He said that the PODs rotated between the municipalities throughout the county during the first weeks of January.

“Unfortunately the amount of vaccine available to us as a county and as a township is severely diminished,” Martin said. “It’s not nearly enough to accommodate the demand that we’ve seen from you all.”

He said that in the days after the state increased the pool of eligible recipients on Jan. 14, Hamilton Township received more than 2,500 calls from people wanting the vaccine.

Supply is a major problem, and will continue to be going forward, said Hughes. “As of today (Jan. 22), the state is giving Mercer County only 800 doses per week,” he said.

Those doses must be shared with towns based on population. Vaccines must be used within seven days of receipt from the state.

“The state and counties are all behind because the federal government has released so little vaccine to New Jersey, and this has impacted our ability to ramp up and get more individuals vaccinated,” said Marygrace Billek, Mercer County director of human services

She said that the county has had a distribution plan in place for more than 15 years, but that plan is predicated on the availability of the Strategic National Stockpile from the Federal government.

“For COVID-19, we have all had to rethink our plans and processes and do things differently, and to that end Mercer will stand up and support two regional vaccination sites, something that has not been part of our past plan,” Billek said.

Officials were hopeful that the situation would improve with the opening of a regional vaccination site on Jan. 25 at CURE Insurance Arena in Trenton.

The regional site, a joint effort between the county and Capital Health, opened planning to vaccinate 200 people a day using a separate doses allocated to Capital Health by the state.

“We will be continuing 5 to 7 days a week, expanding the number of doses per day as supply increases,” Hughes said.

The plan is to also use Mercer County College as a regional site along with the municipal sites as the number of vaccines increases. Hughes said he anticipates this will happen in mid-February.