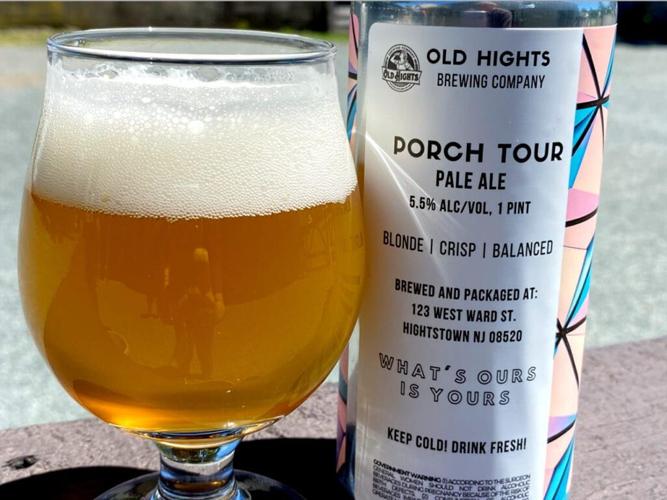 Porch Tour Pale Ale is one of the first beers to go on sale at Old Hights Brewing Company in Hightstown. 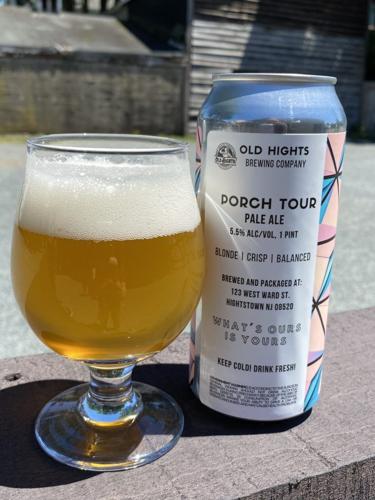 Porch Tour pale ale, one of the first beers brewed and canned by Old Hights Brewing Company in Hightstown. 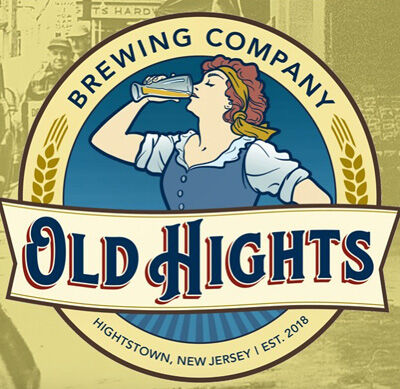 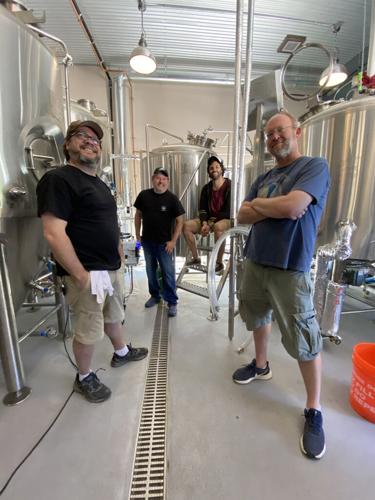 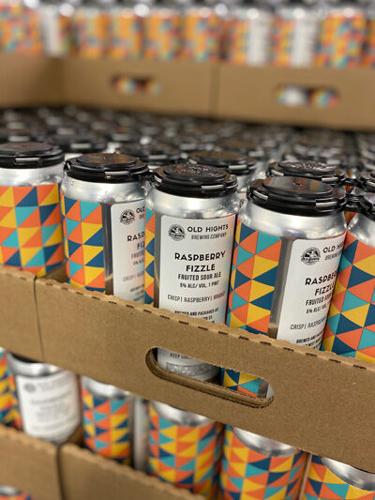 Raspberry Fizzle, one of the first beers brewed and canned by Old Hights Brewing Company.

Porch Tour Pale Ale is one of the first beers to go on sale at Old Hights Brewing Company in Hightstown.

Porch Tour pale ale, one of the first beers brewed and canned by Old Hights Brewing Company in Hightstown.

opened its online store for business this afternoon.

In reality, Old Hights has been around for more than two years — that’s how long co-brewers Alex Costantino and Brian Woodward and their partners, Charles “Lee” Stults and David Puskar, have been working on their passion project.

Ordinarily, opening a brewery means opening up a taproom at the brewery where thirsty people can stop in and order draft ales to drink in house or get packaged ones to go. As the popularity of craft beer has skyrocketed In recent years, breweries have been able to make a significant portion of their revenue from tasting room sales.

And Old Hights Brewing Company, situated in a brand new building on West Ward Avenue, has a custom-designed, reclaimed-wood, indoor-outdoor tasting area all set to go. Alas, the coronavirus pandemic has changed everything.

When Gov. Phil Murphy ordered all restaurant dining rooms and brewery tasting rooms closed in March because of Covid-19, the brewery partners had little choice but to completely upend their business plan if they were going to open this spring.

Originally, they had not planned to sell any prepackaged beer at all. But for now, they will sell everything they brew in four-packs of 16-ounce cans. The four-packs are available for online purchase now, with curbside pickup available starting Thursday afternoon.

Old Hights is kicking things off with four tasty-sounding varieties of beer: Porch Tour Pale Ale; Raspberry Fizzle, a fruited sour ale; West Ward Abbey Ale, a Belgian-style tripel ale; and All Together, a collaborative IPA that has been brewed by more than 550 breweries across the country in support of the hospitality industry, which has been hit hard by the coronavirus.

Rennie DiLorenzo used to tell people that there was great beer being brewed right there in Hightstown.

DiLorenzo was the owner-chef of 12 Farms Restaurant then. He was also neighbors with Alex Costantino, a musician and music educator who had a homebrewing hobby.

“He tasted my beer and he said, ‘We need something like this in town,’” says Costantino, who grew up in Hamilton and graduated from Nottingham High School in 2001.

DiLorenzo is the sort of restaurateur who likes to circulate in his dining room and get to know his guests. “He would tell people we have a brewer, we have great beer in town,” Costantino remembers.

If Costantino happened to be present, people would ask him when the brewery was opening. “Even though there was no plan to open a brewery,” he laughs.

But DiLorenzo had planted a seed.

Charles “Lee” Stults was another neighbor — and another catalyst. Stults had a similar reaction to DiLorenzo after tasting a Belgian saison Costantino had made.

“Lee came over and drank some in my backyard, and he was like, ‘Man, this is really good,’” Costantino recalls. “He still brings it up to this day.”

Stults has deep Hightstown roots. He is a member of Hightstown Borough Council and a partner at OGP Architects on North Main Street. Like DiLorenzo, he encouraged Costantino to start up a brewery in town.

“Everything really started evolving when Lee got involved. Having him involved — I don’t think he recognizes how vital he is,” Costantino says. “Everyone knows Lee, everyone trusts Lee.”

Costantino says that from the beginning, the inspiration was to make the community stronger and celebrate Hightstown’s history and people. “It kept growing from there. It just kind of kept happening,” he says. “Someone was in town who was a lawyer, and he heard about it and said, ‘Hey, I’ll help you out.’ And someone else was a landlord in town and said, ‘Hey, I’ll help you out, I’ve got a place that would be perfect for a brewery.’ And the momentum just kept building until this was really happening.”

Costantino says things really started to come together when David Puskar got involved. The East Windsor resident works for Bloomberg and has a doctorate in finance. “He was like the missing link,” Costantino says. “I guess we had a lot of good ideas and when Dave came around, he was able to organize everything.”

Costantino remembers the day DiLorenzo, who has since sold 12 Farms and moved to Brooklyn, called and asked him if he was busy. “He said, ‘Hey listen, what are you doing tonight? I’ve got a spot picked out for you downtown, let’s go check it out.’”

The building DiLorenzo took Costantino to see was the old Hights Theater on Main Street. Built in the 1930’s, it had been subdivided into multiple retail shops over the years, but now was available for renovation.

In the end, the space wasn’t right for a brewery. But there is a way in which the location will always be tied to the brewery: it inspired the name.

“I thought, hmm, Old Hights,” Costantino says. “I looked it up. No one had trademarked it. We went to historical society to double check — they gave us their blessing. So we settled in on Old Hights Brewing Company. The dream was we’d be in the original movie theater location. But just due to circumstances we ended up in the spot we’re in now.”

The spot they’re in now is a former lumberyard on West Ward Avenue, next to Grove Supply. The newly built facility has a cozy, two-level tasting room all with a view of the 7-bbl steam brewhouse with four 7-bbl fermenters and one 14-bbl fermenter. It’s the kind of place that beer drinkers love to gather in, if only gathering in indoor spaces were permitted by law.

Costantino sees a lot of similarities between brewing and music. And he thinks maybe that’s why he was drawn to brewing in the first place.

“Brewing is very relatable to music,” he says. “Like in music, brewing is always thinking on your feet, it’s having to adjust to things as they happen. In brewing there’s a recipe, but then like in music there’s quite a lot of creativity involved. And I have an instrument repair background, and you’ve got to have some mechanical piece in you, in brewing and in music. You have to figure out problems with the equipment, tinker with things, pull things apart and put them back together.”

He is a band director for a number of Hamilton Township elementary schools. He also plays tuba with the New Jersey Capital Philharmonic Orchestra. Co-brewer Brian Woodward, who lives in Princeton Junction, teaches instrumental music in the West Windsor-Plainsboro School District. He is also a musician with the Capital Philharmonic, playing the trumpet.

Woodward and Costantino share a few hobbies. Brewing is one. Barbecue is another. “One of our first bonds was barbecue. We both got Big Green Eggs and were always making barbecue on them,” Costantino says. “We just always were talking about hobbies we both shared and everything just kind of progressed into a great friendship, and now a partnership.”

When Costantino proposed opening a brewery together, Woodward agreed to do it. “When I asked him to come aboard, I don’t think either of us knew what we were getting into, but he jumped in with both feet,” Costantino says.

Woodward and Costantino are both graduates of The College of New Jersey, as is Puskar. TCNJ is also where Costantino met his wife Lisa, who is a choir teacher in Monroe.

Old Hights Brewing Company may have partners, but it is very much a family affair. Lisa Costantino set up the Old Hights website and does social media and marketing for the brewery. She also designs the can labels. Amy Woodward set up the brewery’s online store, and Hilary Swanson, partner of Lee Stults, does merchandising and is responsible for the curbside pickup process.

“Everyone on the team is very work-driven,” Costantino says. “We set goals for ourselves and we make sure it all happens.”

Costantino and Woodward have spent time in the past few years visiting and shadow brewing at a number of breweries in the mid-Atlantic region, including Montclair Brewery in Montclair, Four City Brewing Company in Orange, and District 96 Beer Factory in Rockland County, New York.

“This industry is so welcoming,” Costantino says. “We’d introduce ourselves, say we’re a friend of a friend, and the brewers would say ‘Come on over!’ That helped us really figure out the kind of brewing system we wanted. And they would tell us the mistakes they made starting up, they would be like, ‘Hey, this happened to me, watch out for that.’”

But in keeping with Old Hights’ community theme, Costantino says they are committed to filling its 16 taps with a variety of beer styles. “We wanted to be able to have enough taps to have something for everyone,” Costantino says. “We made a raspberry gose (a salty, tart style of ale) and we gave it out on people who said they don’t like beer. And they were like, ‘I didn’t know beer could taste like that.’ So that’s what we’re going for.”

Old Hights finished installation of its equipment in March, only for the governor to shut the state down due to the pandemic. Eventually, Alcoholic Beverage Control was able to give the go ahead to brew, but by that time, taprooms were closed throughout the state. “The brewery is such a cool hang, which is what we wanted, but no one can hang there, which is such a drag,” Costantino laments.

Jay Kurz at Tripod Canning, a mobile canning service based in Mountainside, had reached out to Old Hights a few months earlier to see if they would want to use his canning lines. “We said, ‘No, we’ll let you know if we ever get there,’” Costantino says. “We weren’t thinking about distribution at all.”

Now they had to change tack on the fly. Costantino called Kurz back. “I said, ‘You know what, change of plans.’” Once they got the OK to brew, they scheduled a canning date with Tripod, and then filled all their fermenters with beer. On Sunday, they got everything into cans, brewed more beer to fill the fermenters, and today they opened the online store.

Now, even though the governor has now said that restaurants and breweries can operate withsocially distanced, outdoor distanced service, Costantino says he doesn’t know when Old Hights Brewing Company will open its tasting room.

“We haven’t come to a decision on what we’re going to do. Do we want to can [the next batches] too? We have a nice outdoor space, should we open that? We are in a situation where we have to wait and see,” he says.

But Costantino is sure about one thing: at every step of the way, the support Old Hights Brewing Company has seen from the Hightstown community has been amazing.

“Since we started doing this project, I’ve never gotten so much positive feedback over anything I’ve ever done in my life,” he says. “Everyone is so excited, and they just want to help in any way.”

(This article has been corrected to reflect that Lisa Costantino is married to Alex Costantino, not Amy.)