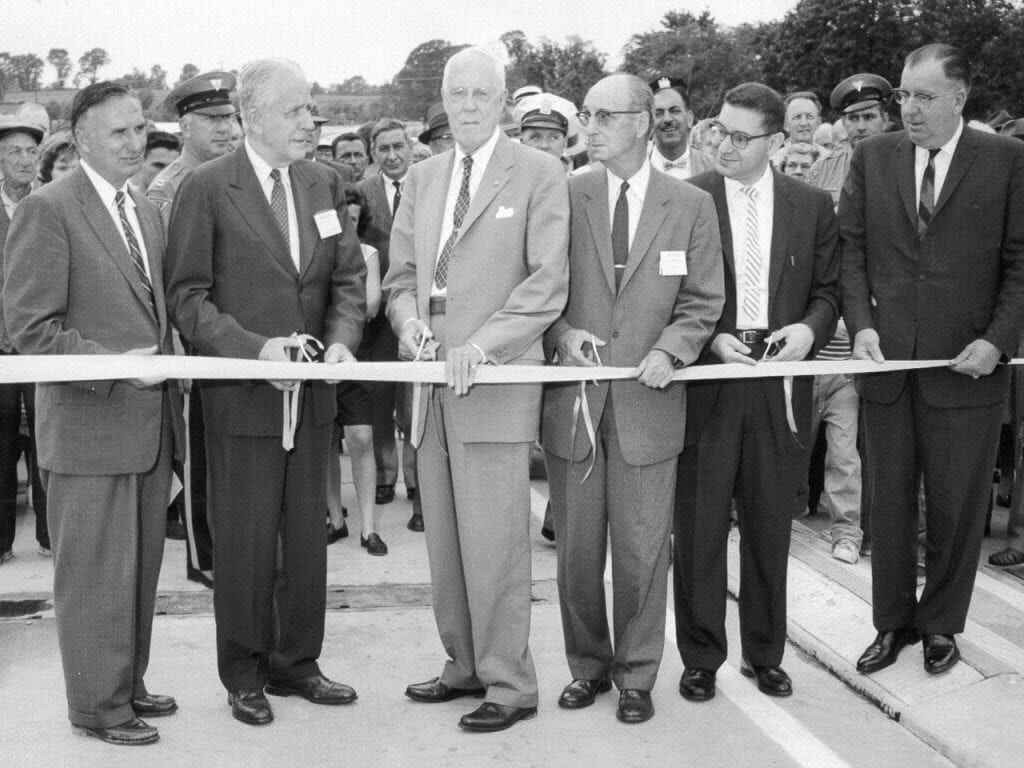 John Montgomery Scudder (center) cuts the ceremonial ribbon at the Scudder Falls Bridge on June 22, 1961. Omero C. Catan, the first person to drive across the newly dedicated bridge, is standing behind the ribbon cutters with his trademark mustache and bowtie. 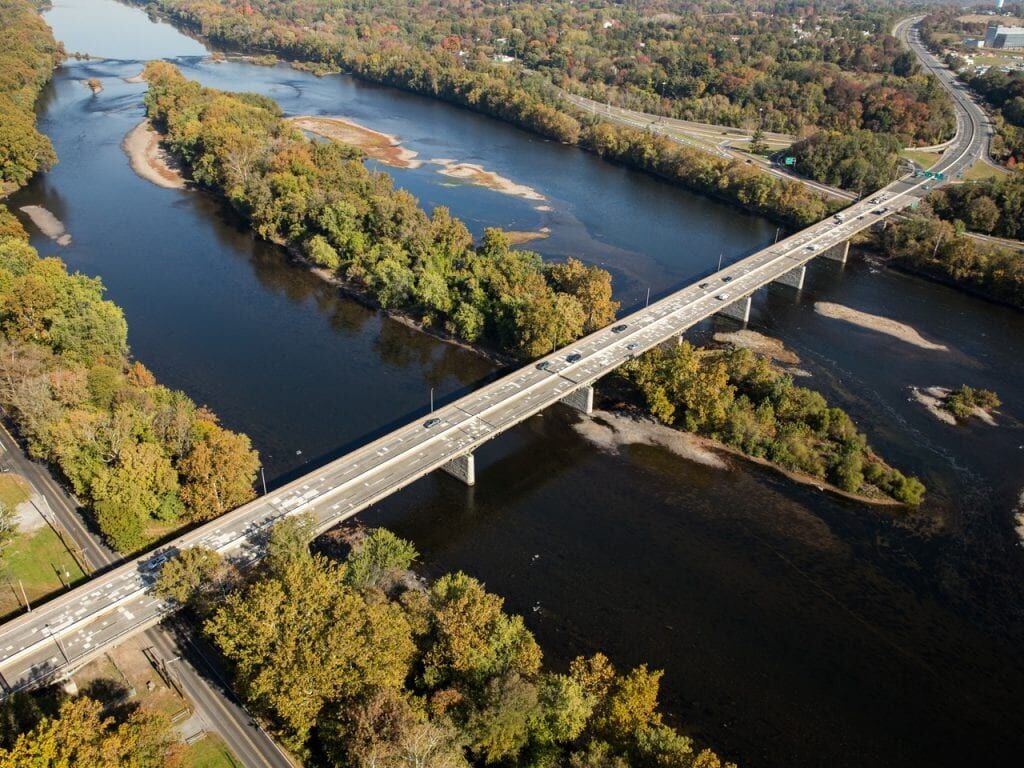 The Scudder Falls Bridge (above) is being dismantled following the opening of a new bridge.

For 58 years, the Scudder Falls Bridge has been a fixture in Ewing Township.

Below is an edited version of an article by the Delaware River Joint Toll Bridge Commission detailing the history of the bridge.

Without notice or fanfare, the anniversary of the opening of the Scudder Falls Bridge occurred on June 22. It was the bridge’s last anniversary.

It was an ignominious end for a heavily used river crossing that served generations of motorists, but had increasingly become the bane of area job commuters as the structure’s inherent capacity limitations regularly served as a dreaded peak-period traffic bottleneck between Bucks and Mercer counties.

A replacement bridge consisting of two separate spans is under construction, and the first completed span of that new bridge opened to traffic in July. The bridge now operates as a toll crossing in the Pennsylvania-bound direction.

The Scudder Falls Bridge was constructed jointly by Pennsylvania and New Jersey. The construction was financed by both New Jersey and Pennsylvania and the federal Bureau of Public Roads. Each state covered 25-percent shares of the project’s cost. Federal participation was the remaining 50 percent of the project costs. While the bridge later was melded into the federal Interstate Highway System after being in service for several years, old U.S. highway funds were used to construct the bridge as local river crossing.

Construction of the substructure (abutments and piers) started on Aug. 8, 1958. This work reached completion on July 16, 1959. Construction of the bridge’s superstructure was already underway by this time, having begun on May 25, 1959 with delivery of fabricated steel. Putting up the steel took 14 weeks and 4 days, ending on Sept. 4, 1959.

Two workers died during this phase of construction: James D. Wiley, Jr., 23, of Lambertville and John Post, Jr., 29, of Trenton. On June 30, 1959, the two men were crushed when a long boom of a crane buckled and fell on them, according to a Trenton Evening Times article published on July 1, 1959.

The 80-foot-long boom with an 80-ton capacity was being used to lift steel off a delivery truck that had transported the steel from Bethlehem, Pennsylvania. Both men were iron workers employed by a subcontractor, the Lehigh Valley Construction Company of Allentown, Pennsylvania, according to the Trenton Evening Times.

The superstructure’s steel work was painted with three coats of paint. Records show the three coats consisted of approximately 2,500 gallons of paint. Laying the concrete roadways began Aug. 4, 1959 and required 12 weeks and four days to complete, marking the project’s end on Oct. 29, 1959.

The completed 1,740-foot-long bridge then sat along the river as an unused structure for 20 months while an interchange connecting the bridge with Route 29 was constructed on the bridge’s New Jersey side. Meanwhile, the Pennsylvania approach came to an abrupt dead end at Taylorsville Road on that state’s end of the bridge. These initial approaches were constructed by Geo. M. Brewster & Son, Inc. of Bogota.

Prior to its opening, the bridge was referred to in plan sheets and correspondence as the “Scudders Falls Bridge.” The additional “s” at the end of the name of Scudder was a colloquialism for multiple generations of residents who lived along the river.

However, the pluralization of Scudder was a source of irritation for descendants of Richard Betts Scudder who, with his wife, came to the then-small settlement of Trenton circa 1700.

In 1709, he purchased a 500-acre parcel along the Delaware River between Trenton and Washington Crossing. A grandson of Richard Betts Scudder—Amos Scudder, who is buried in the First Presbyterian Church of Ewing Cemetery—served as an ensign under the command of Capt. John Mott in the 1st Hunterdon Regiment of the New Jersey Militia during the Revolutionary War.

Scudder guided roughly half of General Washington’s troops to Trenton for their successful surprise attack of Hessian troops on Dec. 26, 1776.

The large swath of property purchased by Richard Betts Scudder remained in the family for multiple generations and later became known as Scudder Farm. A portion of it was adjacent to the falls along the river, giving name to the adjacent falls thenceforth as Scudder Falls. The New Jersey approaches to the Scudder Falls Bridge were constructed on land that was once part of Richard Betts Scudder’s sprawling plantation.

When time came to open the bridge, correspondence was sent to John Montgomery Scudder, a seventh generation descendant of Richard Betts Scudder, to cut the ceremonial ribbon. Scudder deemed the invitation to be uninviting because of its references to the Scudders Falls Bridge.

Scudder, however, subsequently agreed to take part in the opening ceremony after the Bridge Commission and New Jersey highway department acceded to correctly spell the family’s name on the bridge—Scudder Falls Bridge.

The Trenton Evening Times of June 22, 1961 explained the outcome:

Scudder won a victory in the naming of the bridge. He contended the span should be called Scudder, without the “s.” The DRJTBC had insisted on calling the bridge Scudders, with the “s.” But the commission has yielded to the Scudder family which should, after all, know how its name is spelled.

The formal dedication and opening of the new bridge took place on Thursday, June 22, 1961. A temporary covered platform was erected atop the bridge deck for the occasion. David J. Goldberg, the vice chairman of the DRJTBC and later the first commissioner of the state Department of Transportation, served as master of ceremonies.

Father Joseph W. McLaughlin, pastor of the Church of Our Lady of Good Counsel in West Trenton, delivered the invocation. Scudder made some brief remarks before cutting the ceremonial ribbon.

Catan, who resided in Teaneck, made a hobby of being the first person to drive over new bridges, or through new tunnels, or along newly opened highway segments around the country.

Catan, mustachioed and wearing a bowtie, often drove a vehicle festooned with flags to mark his first crossings.

According to an article in The Levittown Times on June 23, 1961, Catan was the first to arrive at the bridge site at 6:30 a.m. (the ceremonies did not begin until 11 a.m.) and the first in line to drive across the bridge, which officially opened to traffic at 12:30 p.m.

The article quoted Catan as follows: “I get so many requests now to be the first across and so on, that I can’t possibly make them all. But everybody requests my presence on opening day. Like one man said, ‘You brought good luck to others on opening, and we’d like you to give us that blessing.’”

Catan later retired and wrote a book on shuffleboard. He passed away in 1996 at age 82 in Broward County, Florida.

The bridge remained jointly owned by the two states for a little more than 27 years. In 1987, the Commission was assigned outright ownership of the former joint-state-owned non-toll bridges. The transfer of bridge ownership occurred on July 1, 1987. The commission was further directed under the compact to use a share of the proceeds at its toll bridges to continue operating the former state-owned bridges as non-toll crossings. The compact, however, was worded in a manner that would allow for replacement of the Scudder Falls Bridge as a tolled crossing at a later date.

The legislated carve-out for an eventual replacement of the Scudder Falls Bridge was not an accident. Roughly four years before the transfer of the bridge’s ownership, the Mianus River Bridge along I-95 in Connecticut collapsed, killing three people and injuring three others.

That bridge was of a similar design to the Scudder Falls Bridge—a non-redundant girder structure with a failure-prone system of pin-and-hanger connections. It would have been clear to the parties involved in the Compact rewrite that the Scudder Falls Bridge could never be widened and it would be wasteful to invest public monies in a rehabilitation of a substandard, undersized bridge.

A replacement ultimately would be needed, and it likely would require tolls to do the job.

Designed and built before the Baby Boom generation reached their driving years, the bridge experienced dramatic traffic during its 58 years of operation. Several years after opening, the bridge was designated to be part of an orphan segment of I-95 that crossed the river between Bucks County and Mercer County, ending abruptly near Route 1 in New Jersey where it joined I-295.

This orphan segment was re-designated as I-295 as part of the Pennsylvania Turnpike interchange project with I-95 outside Bristol, Pennsylvania. As a result, I-95 now crosses the Delaware River Turnpike Bridge and continues north toward the George Washington Bridge along the N.J. Turnpike. When the I-95/PA Turnpike interchange opened last September, it marked the first time that I-95 was an uninterrupted roadway from Florida to Maine since its conception in the late 1950s.

In 1961, after a little more than six months of operation, 811,114 vehicle crossings were recorded on the bridge. In 1962, its first full year of operation, more than 1.58 million vehicles crossed the bridge. Fast forward to 1990, and the Scudder Falls Bridge’s annual traffic swelled to more than 17.57 million vehicular crossings, the most traffic of any bridge—toll or non-toll—in the commission’s 20-bridge system.

With significant economic growth and expansion during the 1980s and 1990s in Bucks and Mercer counties and the surrounding region, traffic volumes continued to climb. In 1982, after a series of crossover accidents, the bridge was outfitted with a concrete center divider separating the New Jersey-bound and Pennsylvania-bound travel lanes.

In 2000, more than 20 million vehicles crossed the bridge for the first time. After conducting a regional traffic study in 2002, the commission entered into a 2003 agreement with the transportation departments in New Jersey and Pennsylvania to “alleviate existing and future traffic congestion along the I-95 Scudder Falls Bridge Corridor.”

An environmental documentation process was conducted over the next nine years, culminating with the issuance of a Finding of No Significant Impact from the Federal Highway Administration in June 2012, the pivotal regulatory approval needed to advance the Scudder Falls Bridge Replacement Project.

The project reached the halfway point with the opening of the first of two dual bridge spans in July. Final project completion is expected in late summer/early fall 2021.