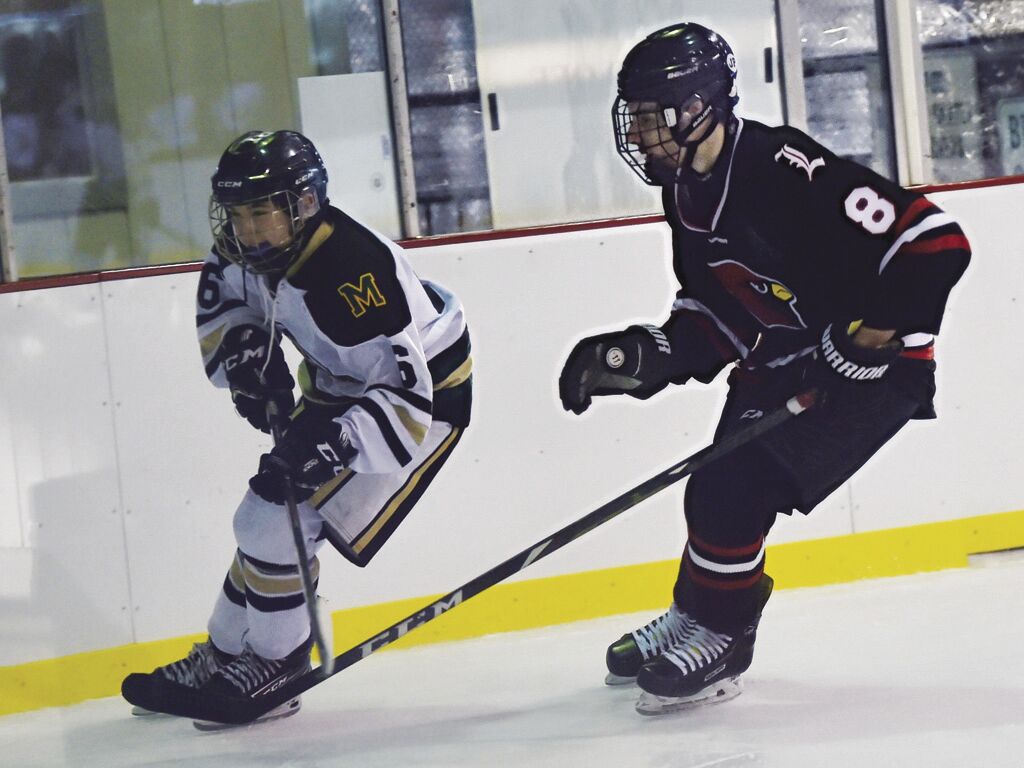 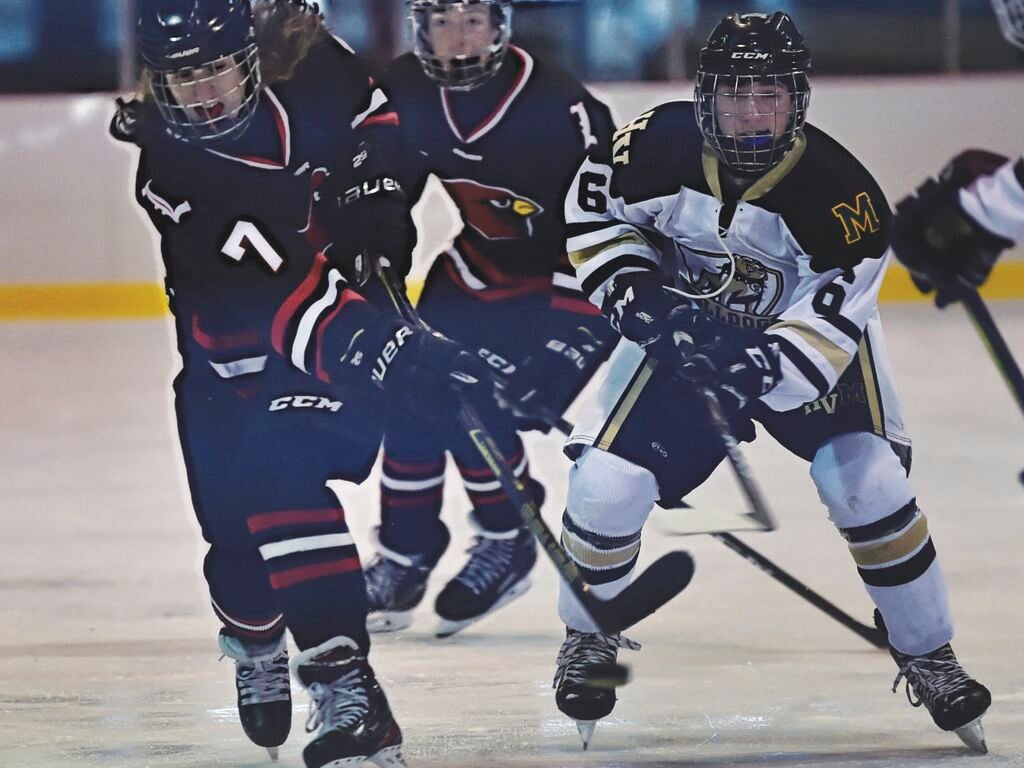 When it comes to the Lawrence High co-op ice hockey program, which combines players from Lawrence, Ewing and Hightstown, Ewing isn’t usually a big contributor.

So imagine coach Andrew Dudich’s pleasant surprise when he procured two players not only from the township, but from the same home and with the same birthdays.

Twin brothers Nate and Ryan Kocheran have become solid contributors for the Cardinals as sophomores, and are just two of three Ewing residents on the roster along with Nick Chetti.

“Two Ewing kids, that in itself is pretty rare,” Dudich said. “Ironically I coached Ryan when he was 10, and I’ve known Nate since he was 10. It’s interesting watching them kind of develop into the hockey players from what they were then to what they are now.”

And just what are they now?

“They’re both very coachable, they’re nice kids, very easy to get along with,” Dudich said. “They’ll do anything to help the team, never complain. They are two ideal hockey players that you’d want on your team.”

In breaking them down individually, the coach loves how he can move Ryan to different spots while keeping Nate anchored in front of the net.

“Ryan is a good overall hockey player,” Dudich said. “It’s a rarity to take a player and have him play shifts at center and shifts on defense and not have a learning curve somewhere in the middle where they make mistakes or are playing out of position. I like to refer to Ryan as our Swiss army knife.”

At 6-foot-3, Nate stands around five inches taller than his brother despite their twin-ship. That size helps make him a valuable blue liner.

“Nate is a very good defenseman,” Dudich said. “He’s a huge kid for his age. He can skate well, he moves the puck well. Usually when tall kids like that hit a growth spurt so fast you see a hindrance in their skating ability.”

They brothers quickly took to the game when they were very young, but were among just a handful of players in their township to play it.

“Most of our school probably doesn’t even know there is a hockey team,” Nate said. “When we were younger we didn’t know any kids in our classes or school that played hockey. The good thing though was that we made friends with kids from other towns through playing travel.”

Their travel program is Lawrence Flames (now Lawrence Nassau Flames after a merger) and they started out as teammates in the Learn To Play, Mites and Squirts leagues. They were separated in Pee Wees and the first year of Bantam play, but reunited as second-year Bantams and have happily stayed together since.

For a while growing up, the two actually shared goaltending duties with the Lawrence Squirts. Ryan began to weary of playing in the nets and Nate wanted to try it out, but neither stuck with it.

“After we both stopped the goalie thing, we learned to work together on the ice with me as a defenseman and him as a forward,” Nate said. “We had a sense of where the other would be on the ice and were pretty effective at moving the puck between us.”

When the twins entered the Lawrence High program, they were happy to be re-united with Dudich. Although Nate did not play directly for him, the Pee Wee teams would sometimes split the ice for practices and coaches would run combined drills. Thus, Nate got to know his future high school coach. He also went on the ice for a few of his practices and played a few games for him that season.

“Coach Dudich helped me to gain confidence in myself as a player,” Nate said. “He was really great about letting me join in. I used to joke around with Ryan that he liked me better even though I wasn’t even on the team.”

Regardless of whether or not that was true, Ryan was happy to see his old mentor coaching the Cardinals.

“Knowing that it was a combined team with players from three high schools—most of who we didn’t know very well—it was nice to have a familiar coach heading up the team,” Ryan said.

Dudich, a former Steinert standout, knows all about playing with a sibling. He and younger brother Jared were teammates on mens’ teams. Andrew admitted to getting a little more angry with him over a mistake than other teammates and sometimes sees that with the Kocherans. He knows, however, it’s no big deal.

“You’ll hear them kind of snap at each other,” the coach said. “It’s a little different than a normal teammate but because they’re brothers you just let them go at it and in about five seconds their heads are back in the game. These guys are very level-headed kids, you don’t see them lose their anger often.”

The boys try to help each other as much as possible. They have a net in their driveway with shooting pads and they will sometimes go to open stick time at local rinks and try to get pick-up games going. They will provide feedback to one another throughout a game.

“Sometimes that’s not really welcomed by the other, but that’s hockey,” Nate said. “We have different styles and don’t always see eye to eye on how to handle different situations.”

That being said, the two impress the heck out of each other as players.

In assessing his brother, Nate said “Ryan has a very accurate pass – he can put the puck on someone’s stick really well. He works hard. He isn’t afraid to battle in the corners. He’s strong on the puck and is tough in front of the net – he’s really good at getting sticks and clearing pucks out.

“On the bench and on the ice, Ryan helps keep things calm in sticky situations. After a heated play on the ice, Ryan can be counted on to make sure our players back away and he settles them down. He’s also pretty good at chirping the other team.”

And in chirping about his twin, Ryan said “Nate is a solid player. He has really settled into a strong defensive presence on both our travel and high school teams. Nate has good hockey sense. He reads plays well and usually knows what the opposing player is going to do next. He is relaxed on the ice and doesn’t rush a move. He takes his time and looks around instead of just getting rid of the puck quickly.

“Nate is a natural leader—he is passionate about hockey, he plays with a lot of heart and is unselfish on the ice. He wants to win, but he genuinely wants to help his teammates out just as much. He’s been our travel team captain for the past two seasons.”

Their best quality for Dudich is that he has them for two more years. Maybe, just maybe, they could inspire a few more Ewing residents on to the ice.

“It would be great if there were enough kids to make a Ewing High team,” Nate said. “But I’m grateful we at least get the chance to play high school hockey with the merged team.”

And their LHS teammates are pretty grateful to have them.