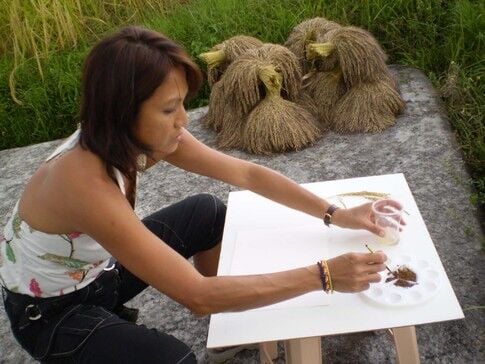 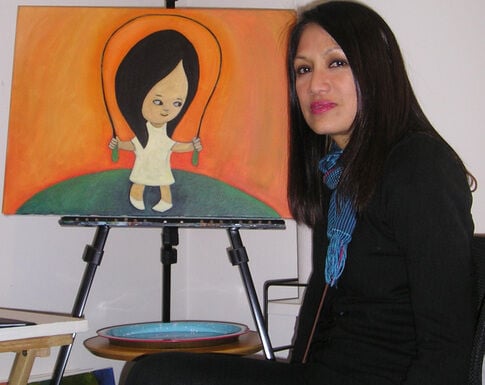 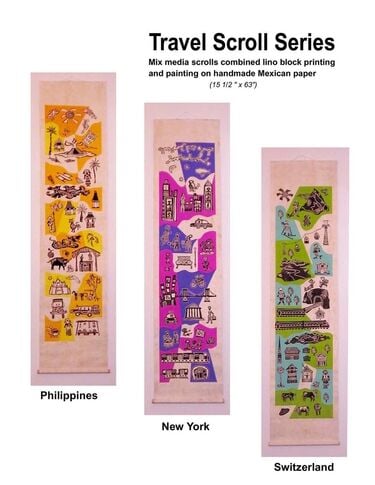 Davidoff’s travel scroll series was inspired by her journeys around the world.

Maria Davidoff’s paintings, like this one, “Little Girl,” are made using a variety of techniques. (Photo by Lynn Robbins.)

On a recent tour of her Ewing based studios, artist Maria Madonna Davidoff displayed her travel scroll series, three 63-inch long painted scrolls on Mexican paper, each representing a geographical location: the Philippines, New York City, and Switzerland. Each scroll tells a story about its location using a collection of iconic images including nature, people, animals, architecture, and modes of transportation.

As someone who has lived on three different continents, Davidoff said her works are based on personal and universal icons.

“Symbols and icons all over the world speak of the universal themes of fear, joy, hope, pain, and celebration. I believe that we are one collective eye sharing a single planet,” Davidoff wrote in a blog post about her scroll series.

“I try to develop art that is both lyrical and portable, a reflection of [my] nomadic nature, of one who is constantly on the move.”

Davidoff was born in the Philippines and moved to New York City with her family in 1979. Since then, she has lived in Switzerland and Singapore. She and her husband Bart moved to Ewing between 1996 and 1997 where they live now with their daughter Bianca.

Davidoff said she creates her own cultural space wherever she finds herself because it helps make sense of things around her. She describes the scrolls as “transportable,” saying they are just like her. The scrolls can easily be moved from one place to another, and like her, are adaptable and can be reinvented. Davidoff creates her images on lino blocks which can be reused for new scrolls or prints.

Her love for art and books comes from her childhood in the Philippines.

“I come from a literary and artistic family,” she said. Her mother Luzviminda Arsciwals was a screenwriter and journalist; and her brother, Jolan Angeles, is an award winning playwright. Her father was an architect.

The novels of her maternal grandfather Juan L. Arsciwals, were published in Manila in the early 1900’s. One of his novels, translated as “The Hero,” had been out of print but was recently republished through Project Gutenberg.

Davidoff loved to draw as early as she could remember. As a young girl attending classes at a Catholic school in the Philippines, she would often find herself in trouble with the nuns for creating sketches rather than paying attention to the class lesson. Her school days inspired her graphic memoir, “Little Mado, A School Girl Adventure.”

“I wasn’t a good student in grade school,” said Davidoff, now a fine arts graduate of the University of the Philippines who has also studied in New York; Bali Indonesia; and Fribourg, Switzerland.

Davidoff sees art and literature as a means of honoring and continuing one’s family legacy.

One of her recent projects, a children’s story titled “Momsie’s Book,” is a collaborative effort between her husband Bart as writer, and herself as illustrator. The story, a book within a book, includes a memoir about growing up in New Haven, Connecticut in the 1920s entitled “Natie and Me,” by Bart’s mother Muriel Shutan-Davidoff. The Ewing Public Library will host a book launch Sunday, April 14 from 2-3 p.m. Bart will read from the book and Madonna will demonstrate how she created the illustrations.

Davidoff’s Ewing studio tour included other local projects, an image of a wall mural now on view at Firefly Yoga in Lawrenceville, and a book cover and illustrations for the TCNJ Cookbook available through The College of New Jersey.

A series that holds special meaning for Davidoff is a group of nature images she created in Bali using paint made from a red rice coffee mixture. Over the past several years, she has traveled to Bali to paint, meditate, and learn the art of Batik, a wax resist dyeing technique used on textile. She plans to visit again this year.

Davidoff has received reviews in the Washington Post and the New York Times. Since 1981, she has displayed her art at over 65 exhibitions. In the east, she has been featured in the Philippines, Singapore, Indonesia, and Japan; and in Europe, Austria, France, and Switzerland. In the West, she has exhibited in Canada, Florida, California, Washington, Maryland, Connecticut, Philadelphia, and New York City. Locally her work has been shown in New Hope, Pa., Lawrence, Lambertville, Ewing, and Washington Crossing.

One thing Davidoff likes about living in Ewing is its closeness to local art scenes and the park.

Before ending her studio tour, Davidoff ushered the group into her work room to demonstrate how she combines freehand sketches with digital technology. Typically, she makes a sketch from hand and scans it into Photoshop. Using a Wacom connect-pen tablet with Photoshop tools, she adds color and texture to the image.

At the end of the demo, she opened a desk drawer and took out a notebook sized plastic folder. “And this,” she said with a smile, “is my portable studio.” The “studio” is a collection of mini art materials and tools that she collected from Asia, Europe, and the U.S. The kit contains all the necessary artist gear in miniature size: watercolors, brushes with their own water container, a crayon kit, markers and colored pencils, a mini stapler and scissors, a small sketch pad and moleskin watercolor book.

Davidoff makes frequent use of her portable studio at local bookstores and cafes, and at Washington Crossing Park. On the web: Illustration and design: madonnaart.com. Blog and work samples: mariamadonnadavidoffsblog.blogspot.com. Little Mado blog: littlemado.blogspot.com