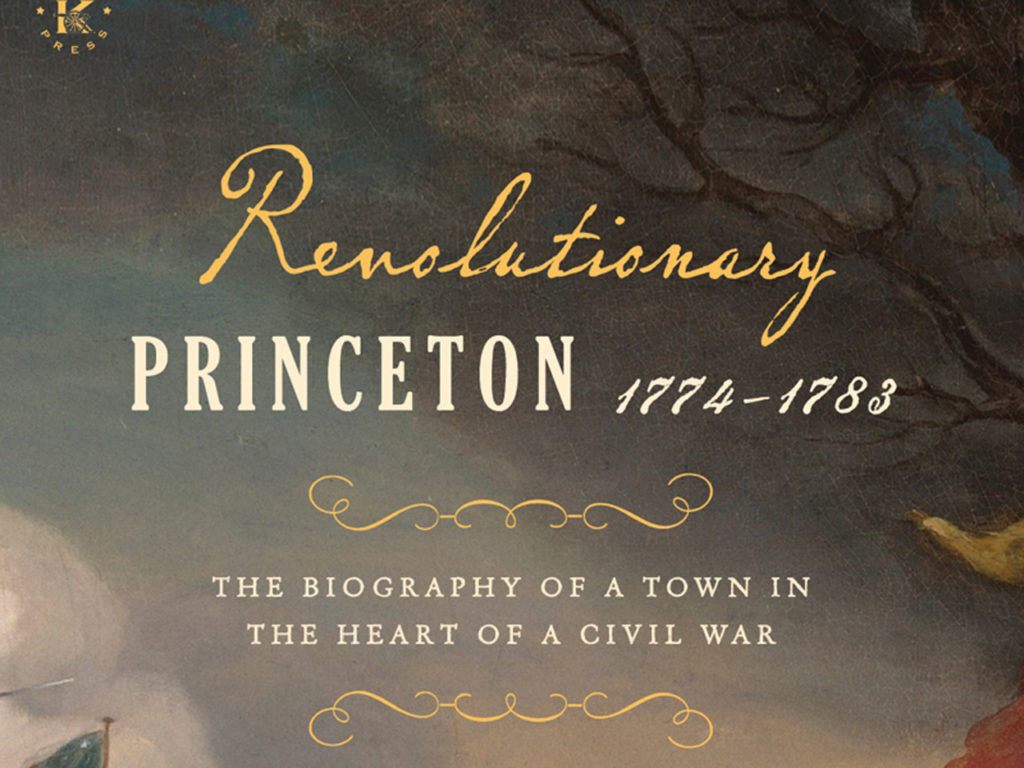 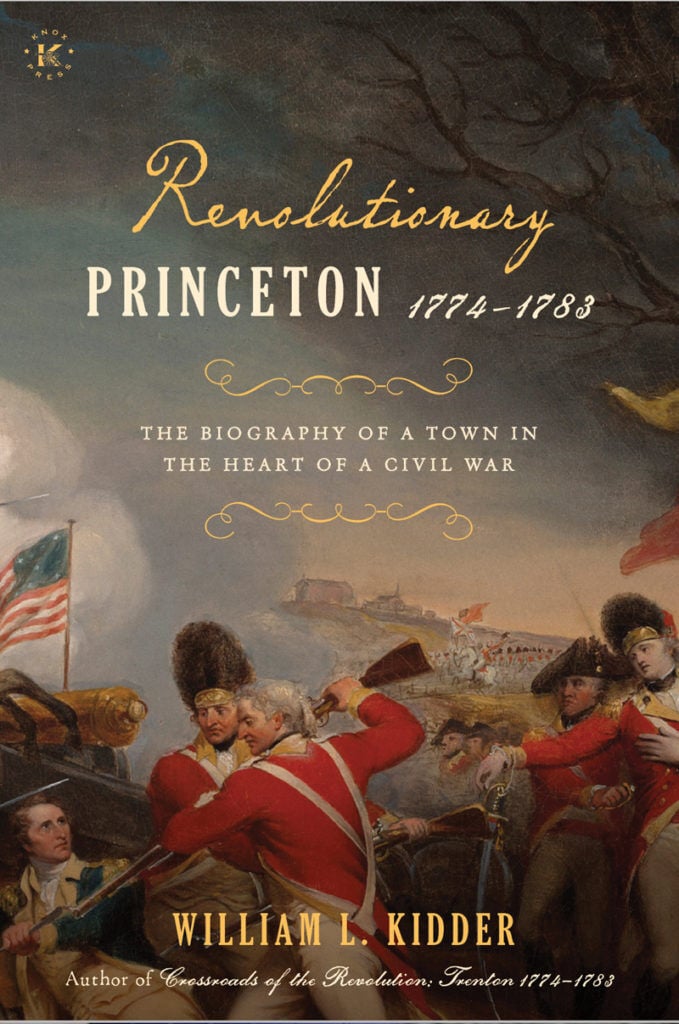 “Around 9 a.m., on the bitterly cold Friday, January 3, 1777, the terrifying sounds of musket and cannon fire made by several thousand soldiers finally diminished and became more distant,” starts William (Larry) Kidder in his new book

Revolutionary Princeton 1774 – 1783: The Biography of an American Town.

The Ewing resident continues by taking the reader deeper into the home located on what is now known as the Princeton Battlefield and opens the door to history.

“Following their farmer’s routine, they had awakened early to start the farm chores that bitterly cold morning when they unexpectedly heard and then saw a long column of American Continental soldiers and militiamen marching up the little-used dirt road that passed the front of their house. As they watched, several hundred soldiers turned left from the column and marched across crop stubble and winter wheat shoots on their frozen farm fields and the adjacent icy cropland and bare orchard of their 41-year-old brother, William.

“In horror, these peaceful Quakers watched an intense battle flare up when those American troops ran into about 500 British troops coming towards them from the Post Road connecting Princeton and Trenton.

“The resulting combat ended in less than an hour, but the fighting had been very heavy near their houses, with an occasional British bullet peppering a wall while they cowered inside. As the sounds of battle became more distant, Thomas and Sarah’s great relief suddenly changed to shocked sadness when several American soldiers came to their door carrying wounded, heavily bleeding men, including one identified as a high ranking officer.

“The peaceful Quaker siblings accommodated these injured men in their home, knowing there must be more wounded and dead outside lying on their fields.”

That’s just one of the vivid moments Kidder presents in this 384-page book that brings Princeton history alive.

It also contains some important observations and harsh realities.

For example, take Kidder’s overview of the region’s Quakers, who “lived comfortably but did not display magnificent homes, expensive furniture, or other signs of wealth.”

But, like others throughout the British colonies, they employed indentured servants and owned enslaved persons, despite some members’ push to abolish the practice.

“Concerns among Quakers in West Jersey about the ethics of slavery first appeared in 1688 when the Germantown, Pennsylvania Quakers wrote up an anti-slavery petition,” Kidder writes.

“The debate led to increasing abolitionist expressions, protests, and actions, including among the Princeton area Quakers. Quakers manumitted many slaves, including ones at Princeton, during the 1770s.”

However, as Kidder points out, “while early Stony Brook residents were primarily Quakers, Presbyterianism became prevalent throughout the area as the population grew. The Presbyterians were not strongly anti-slavery at this point, and some Quakers may have converted to escape criticism for owning slaves.

“Commenting on the enslaved people around Princeton, Presbyterian Reverend John Witherspoon, president of the college in Princeton, a slave owner himself, noted rather casually, if not defensively, that ‘Negroes are exceedingly well used, being fed and clothed as well as any free persons who live by daily labor.’”

It’s such social and personal conflicts that pull the reader into the minds of the people who created our region and nation.

The book strikes its flint spark in 1774 when “many residents of Princeton, like many people in the 13 British North American colonies, had become increasingly concerned about acts passed by the distant British Parliament that affected their lives.

“The resultant protest actions, however, came more under the heading of news than something in which people were actively involved. The rising tide of protests against these acts reached flood level on December 13, 1773, when protestors acted out their disgust with a small tax on tea and destroyed a shipment of it in Boston Harbor.”

Then, as Kidder so keenly reports, “One night in late January, a few days after Paul Revere rode through Princeton spreading the news about the destruction of tea in Boston harbor, College of New Jersey students held their own protest against the tax of imported tea. Several boys broke into the college steward’s storeroom, took out the winter supply of tea, and then went from room to room, removing all privately owned tea.

“They destroyed the tea in a bonfire built in the yard in front of Nassau Hall while tolling the school bell and making ‘many spirited resolves.’ Other students enthusiastically burned effigies of Massachusetts Governor Hutchinson, ‘amidst the repeated acclamations of a large crowd of spectators.’

“Not everyone in the village agreed with the boys’ actions, and tempers flared on both sides. Innkeeper William Hick, whose inn stood across the street from the college, drew negative attention to himself by making pro-government remarks that others in the assembled crowd found obnoxious. College senior Samuel Leake became so emotionally caught up that he somehow insulted a college trustee, possibly local lawyer Richard Stockton, who came by and calmly tried to break up the ‘riotous proceedings.’

“Afterward, the Pennsylvania Gazette reported that ‘we hear from Princeton, in New Jersey, that the officers and students of the college, have unanimously agreed to drink no more TEA.’”

Kidder’s witty blending of American figures such as Paul Revere with the day-to-day details of colonial Princeton engages and quickly reminds us of the region’s placement as both the crossroads for East Coast travel and the crossroads of the Revolution.

Here’s another example of the many prominent historic figures to be mentioned — and a Princeton tavern that had been known to locals until the late 20th century: “Before the Continental Congress was scheduled to meet, 39-year-old John Adams set out from New Brunswick in a carriage smartly drawn by four horses. Squeezed in the vehicle with him were his older cousin Samuel Adams, Thomas Cushing, and Robert Treat Paine, the Massachusetts delegates to the upcoming Continental Congress, and also their four servants.

“After a jarring, dusty ride of about 15 miles over the uneven dirt Post Road, sometimes called the King’s Highway or the Upper Road, connecting New York and Philadelphia, they entered the pretty village of Princeton about noon.

“Their driver stopped the carriage in front of 38-year-old Jacob Hyer’s tavern, proudly displaying an image of the literary character Hudibras on its sign. This inn stood quite near massive Nassau Hall, constructed from light brown, locally quarried sandstone that housed the College of New Jersey.

“Presbyterians brought the college to town in 1757, and Jacob had humorously named his tavern the Hudibras, after the title character in Samuel Butler’s 1663 mock-heroic poem satirizing religious dissenters, such as ‘New Light’ Presbyterians.”

Yet it is Kidder’s ability to place the reader into the era’s uncertain times and the grating daily challenges that people faced that makes the book more than just a recount of familiar history.

As the writer notes at the start of his chapter “1781,” “Morale in America had reached another low point as (the year) began to unfold. The continual dragging on of the inconclusive war had created or exacerbated many problems, including the depreciation of currency and Loyalists’ efforts to disrupt the revolution. The 13 new states had not even come together to ratify the Articles of Confederation.”

“Princeton experienced the Revolution and the war as a diverse community trying to deal with events that were outside their control,” writes Kidder at the end of his book.

He then gets to the heart of his life’s work and the importance of learning history: “In many ways, they were like us today, and understanding their struggles in the 18th century can help us understand our struggles today.”