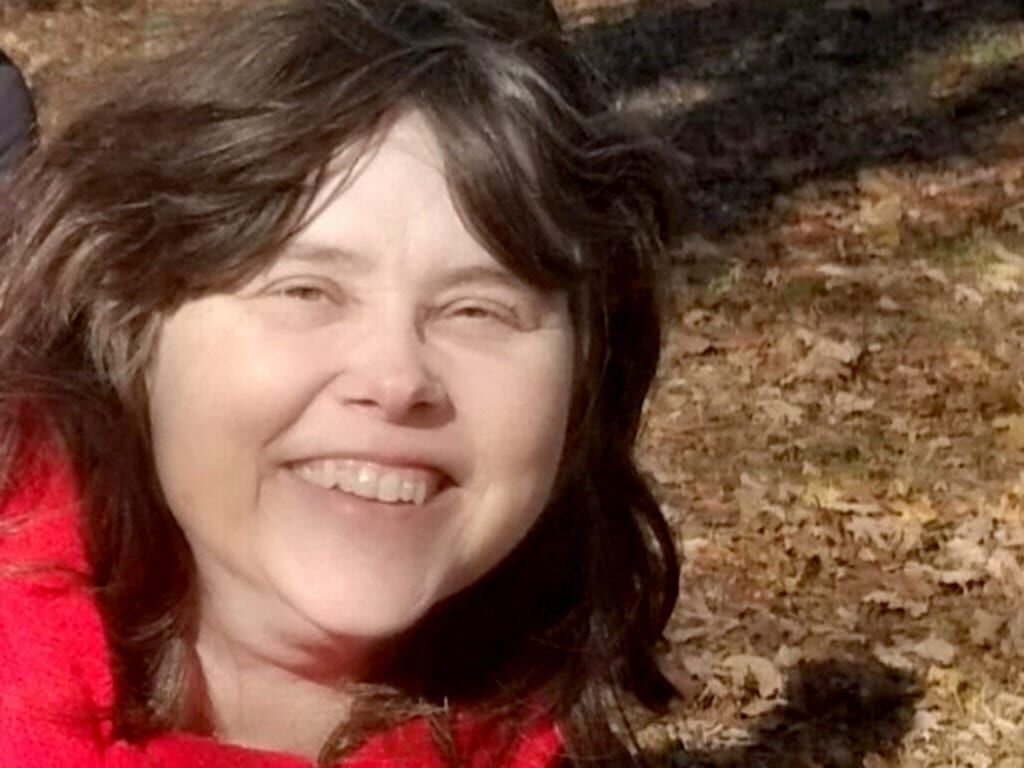 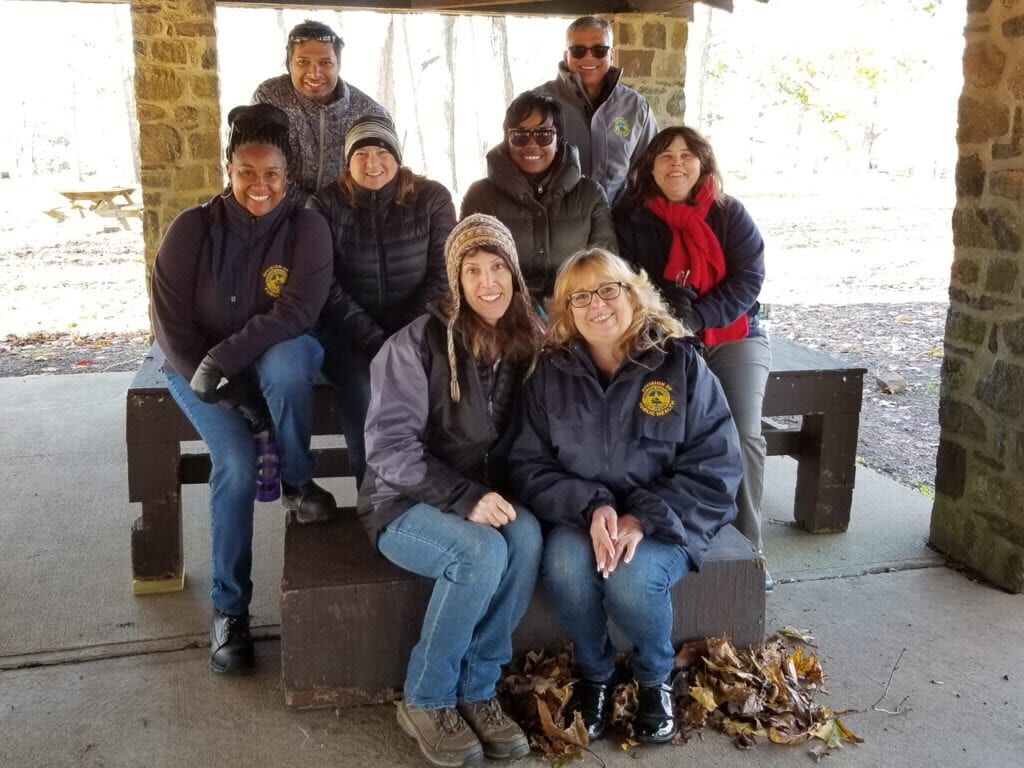 A November 2019 photo of the Division of Public Health team. In the front row are Sandra Garrity and Stephanie Mendelsohn; in the middle row are Deena Holland-Moore, Kristin Reed, Tymia Ellison and Darlene Andes; in the back row are John Arulmohan and Anil Sharma.

Like millions of Americans, Darlene Andes suffered from seasonal allergies. By early April those allergies were bedeviling her, like they did every spring.

But she worked on, as people do. Especially if their job title is public health emergency notification system coordinator for the Mercer County Division of Public Health, and the nation is in the grips of the Covid-19 pandemic.

It was Andes’ job to plan, organize and conduct emergency management operations for the region. She was the person who received alerts from the Centers for Disease Control and distributed urgent public health information to the physicians, hospitals, businesses, faith organizations and municipal health departments of Mercer County.

Andes helped local officials understand how to explain the coronavirus to their constituents. She even helped doctors understand how to talk about Covid-19 with their patients. She was a vital player as the county worked fervently to open and operate its first Covid-19 testing center in the parking lot of Quaker Bridge Mall.

She worked with doctors to determine how the testing center would work, and drafted the communications that the county would use to inform the public about it. On these matters, as was usually the case, Andes worked behind the scenes.

The testing center opened on March 31. Like other members of her division, Andes started putting in shifts to help the county’s Office of Emergency Management schedule testing appointments. She was there at the Dempster Fire Training Center in Lawrence on Saturday, April 4, working alongside colleagues like senior IT specialist John Arulmohan.

Arulmohan met Andes in 2014, when she joined the division from her previous job in Hunterdon County. He knew that his co-worker dealt with allergies every year, and that this year was no different. “She’s always had them,” he says. “But that’s all she complained about.”

On Sunday, April 5, Andes had her first day off in a while. Arulmohan and several others from the Division of Health were at the Dempster Center working that day scheduling appointments for Covid-19 testing. So that’s where they were when health officer Kristin Reed told them that they needed to have an administrative meeting.

In that meeting, Reed gave them the shocking news. Darlene Andes had died, and Covid-19 was the cause. The Hamilton resident was 54.

“That’s how we found out, on the 5th,” Arulmohan says. “We were working with her on the 4th. There were no signs that she had it, except for her seasonal allergies. But I guess [the allergy symptoms] masked her shortness of breath.”

Weeks before most Americans had ever thought about a coronavirus striking these shores, Darlene Mae Andes was already working hard to help get them through the coming crisis.

She was, as Gov. Phil Murphy described her earlier this month, a health educator and a risk communicator. She kept local health departments, hospitals, doctors’ offices and other organizations up to date on public health and bioterrorism alerts through the state’s Local Information Network Communications System, or LINCS, and its Community Health Alert and Information System, or CHAIN.

“Her ability to get out and educate the public was something I’ve never seen before.”

Through those systems, she had email access to most of the people in the community who work to keep people safe during health emergencies. If you’ve ever wondered how your doctor or local health officer knows so much about the latest disease outbreak or health concern, chances are they have read some material that came through Darlene first.

She wrote scripts for health-care professionals to use when explaining emergent public health concerns. She would rewrite those scripts into nontechnical language that she could use to educate teachers, clergy and seniors, or find translations so that she could reach non-English-speaking populations.

Reed says that Andes thoroughly researched topics so that she could tailor health education programs to meet the needs of the community. “She really knew how to make some of the most boring and difficult topics interesting and fun,” she says.

She created posters, wrote brochures, held seminars and hosted information sessions to spread the word about whatever was the issue of the day. “She turned (the role of public health educator) into something I don’t think it ever was,” Reed says. “And her ability to get out into the public and provide health education materials to the public was something I’ve never seen before.”

Earlier this year, the county got a state grant to educate the public about a recent outbreak of hepatitis A. In her typical fashion, Andes created and helped distribute the written materials that could help people understand the threat posed by the disease. Where she thought posters and newsletters weren’t enough, she set up face-to-face sessions to make sure she got the word out.

“She really targeted her audiences on hepatitis A, talking to school nurses, going to some of the senior centers, picking populations where she wanted to make the most impact,” says Marygrace Billek, Mercer County’s director of human services, who worked with Andes. “We have plenty of resources to help educators. But Darlene understood what her audience needed, and created content for them. If you wanted coloring books to hand out for kids, she would order 250 coloring books that would be just right. That was her superpower.”

“We’re mission oriented and so now we’re finishing this mission— I don’t think Darlene would have wanted it any other way.”

Billek remembers early on in the Covid-19 crisis, before the lockdown, when the county was looking to get the word out about the importance of hand washing. “We had, I think, three meetings, to decide what kinds of posters they would be … they needed to be as simple as possible, but they had to be eye catching,” she says.

Then Andes got involved. Billek says that she quickly put together a design that was just what they needed, in English and Spanish, complete with graphics she got from the Centers For Disease Control. “It literally took her five minutes to come up with something,” Billek says.

When county officials were setting up the coronavirus testing center, they knew they were going to have to train non-health-care professionals to answer the phones. “We had to train 20 people or more who are still, to this day, working off of Darlene’s script,” Billek says. “And people are upset when they call you, they are anxious about what’s wrong with them. They want to talk to you because they think you’re a health professional.”

Andes wrote a script to help staff redirect callers’ questions to their health-care providers, but do it in a way that did not upset the callers. “And then her job was to train everyone on how to use that script,” Billek says.

Many of Andes’ co-workers remember their colleague with deep respect.

“She was such a tremendous helper,” says Deena Holland-Moore, senior registered environmental health specialist. “She helped with passion about things that she didn’t know about. And if she knew about it, you’d end up having almost a parallel passion about whatever she was trying to teach you or share.”

Stephanie Mendelsohn, public health nursing supervisor, says Andes was one of the hardest working people she’s ever met. “She was always willing to pitch in, whether it was her job to do or not,” Mendelsohn says.

Senior environmental health specialist Anil Sharma remembers meeting Andes when she was public health coordinator for Hunterdon County. “I personally found her very dedicated and always willing to go the extra mile. She will be missed very much.”

Sharma says Andes was also fond of the fresh chutney that he would make for her. “I would ask her, ‘How can you handle such a spicy chutney?’ I gave her that a few times and she was very appreciative of it always.”

Sandra Garrity, registered environmental health specialist, said she had only known Andes for a little over a year, but that she would miss her sense of humor and her laugh. “That’s one thing I will always cherish about her,” she said.

With so much to do during the pandemic, the members of the Division of Health have had little opportunity to deal with their grief in the wake of Andes’ death. It’s all hands on deck for now, answering phones at the Dempster Center as well as doing the work they always have to do in a health crisis. Work that that now includes pitching in to fill Andes’ role as well.

“I don’t know how to say it, but we’ve pulled together as a team and kind of beyond stepped up to the plate,” Reed says. “But it’s a big loss. We’re mission oriented and so now we’re finishing this mission — I don’t think Darlene would have wanted it any other way. We’ll have to regroup when we get back on the other side of this disease.”

“Well known, well respected and loved by her colleagues and peers, Darlene is being remembered for her patience and kindness, for her innovative thinking, and for her love of family and her faith,” the governor said. “And she was only 54 years old. I spoke yesterday with her sister Barbara, who lives in the Shenandoah Valley In Virginia, and as you could imagine, like all these conversations, it was emotional, and God bless and God speed the precious life of her sister Darlene.”