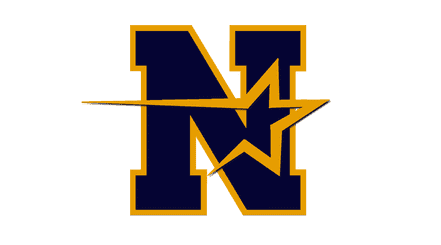 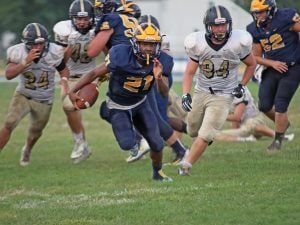 Nottingham High’s Diontae Nicholson in 2017 wearing colors that remind some of the University of Michigan. (File photo by Mary Malone.)

Sometimes Michigan colors are in the eye-of-the-beholder and nothing more.

Forty-two-year Hamilton resident Gary Wilson emailed the Hamilton Post this month after reading my story in last month’s issue about the origins of the names of Hamilton Township schools.

“I understand Hamilton West’s alliterative nickname “The Hamilton Hornets and the resulting orange and black colors,” Wilson wrote. “Similarly, I understand Robbinsville‘s use of the block ‘R’ and red and black colors, similar to Rutgers. But how did Michigan come to play such a big role in the colors of the other local high schools?

“Steinert football uniforms are a complete copy of Michigan State with its green and white colors, and even the nickname of Spartans and helmet logo.

“And when Nottingham became a high school, they picked the name Northstars because of the location. But then they took the maize and blue colors and even the helmet markings of the University of Michigan.

“So who in the Hamilton school system is such a devotee of the state of Michigan?”

Most people who know me know that the intricacies of sports teams — mascots, team colors, uniforms — barely make my radar screen. I root for the Tar Heels of North Carolina during basketball season. That’s about as much athletics as I invest in.

But, I knew enough to seek out the institutional memory of HTSD and here is what I have learned.

“I don’t think it has anything to do with a love of Michigan. I can’t speak as to why the colors, but I can speak to why the copying of styles for uniforms. When we purchase uniforms from companies, marketing is done using major college programs and styles are replicated and easily produced.

“So in short, coaches and players want to wear and replicate what they see on professional and college teams. Hamilton with the Washington W (for West) for baseball and softball hats, football helmet W like Wisconsin, Nottingham Northstar logo similar to Houston Astro’s logo of the early 2000’s. More or less a style of the times and what is put out to us as available products for purchase.

And speaking of those Hamilton Hornets, Grice principal David Innocenzi started his career as a history teacher at HHW. He remembered reading about the origin of the mascot in a 1942 copy of the school’s newspaper called Criterion.

“The Hornets took the name from the WWII aircraft carrier U.S.S. Hornet after the planes in the Doolittle Raid took off from this ship in 1942. This raid was in response to the attack on Pearl Harbor.”

North athletic director Jon Adams worked his way up to the @BigDawgAD Twitter handle and AD position through coaching at North. He had a lot to tell me about mascots and uniforms, declaring: “I think our look is the best in the league.

We had no identity,” writes Adams, “So one of my coaches and I were talking (only in football) and got the idea to change our look from a yellow helmet to our current look with the Nottingham wing. It is not the Michigan wing. Our helmet has the top part of a star with stripes. It is different from Michigan, and was designed by English teacher Dave Tees, who was my freshmen coach.

“At the time we really had no identity in our football program. So we figured we would start one. Our players loved the look as did our coaching staff. The rest is history.

“No, no one really cared to be honest. No one ever asked me why we changed our look until today.

When I asked about the origin of the Blue and Gold colors, Adams responded:

“The school colors were blue and gold already. We had blue and white uniforms early on.

We sat down and designed a new look, and kids loved them. The uniform has changed over years as jersey styles [come and go].

Tracking down the origin of the green and white colors, and the Spartan mascot, for Steinert was tricky. a 2013 news story at nj.com noted:

“While it’s unclear when Steinert first began using the helmet logo, a different logo is used in communications for online alumni groups who graduated from the school in 1978 and earlier.

The Michigan State-style logo appears in communications from alumni groups who graduated in 1979 or later.

“I received this information from my father. The first graduating class was in 1961. Students started there in 1958. The students would have voted to select the name Spartans and school colors, since it had to be board approved.”

Constantino wrote much the same:

“I am sure the decisions for school colors were made at the administrative level and approved by the board of education. BOE. I know when a new school was put in place, like West Windsor-Plainsboro North and Robbinsville, that is where decisions were made.

Uniform styles are done by the head coaches of the sport along with the athletic directors.”

Some in the community undoubtedly remember that in 2015, Michigan State asked the district to sign a legal agreement in order to continue using the green and white colors and the distinctive Spartan logo. Such an agreement is nothing out of the ordinary, as noted in the same news story:

“Notre Dame High School in Lawrence has continued discussions with the University of Notre Dame about the use of the college’s iconic Fightin’ Irish leprechaun and its interlocking ‘N-D’ logo, according to a 2010 alumni bulletin.”

So there don’t seem to be any hidden MSU skeletons in the HTSD athletic department closets, unless there are more seasoned folks out there with inside information.