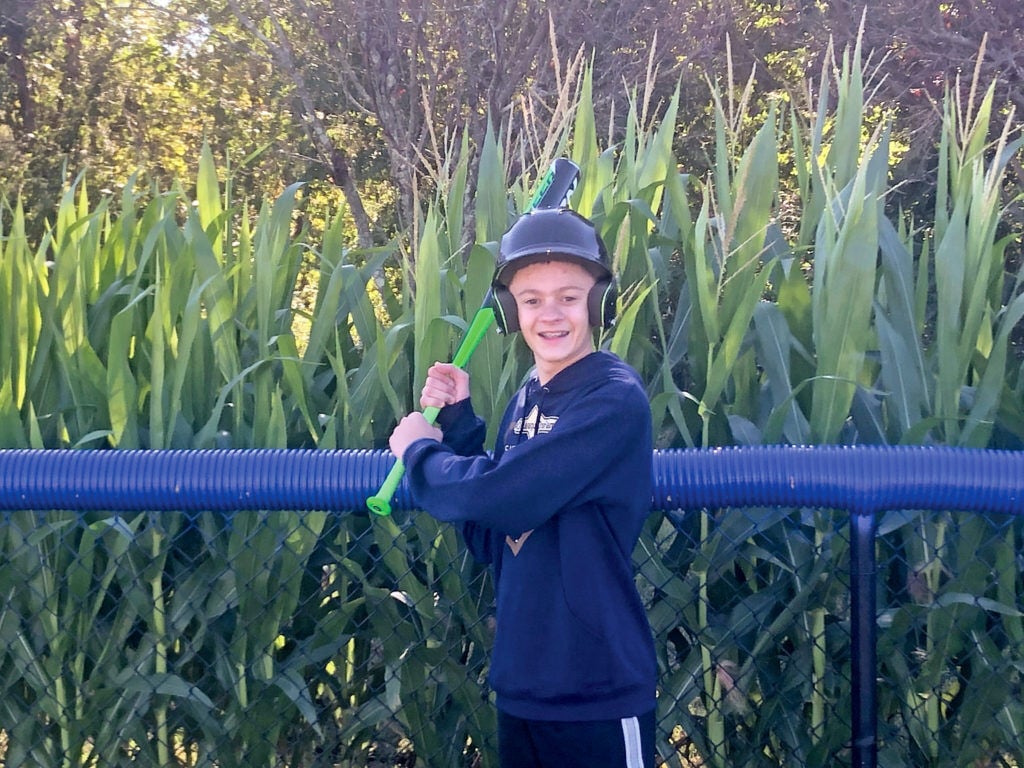 Michael Jeannette of Hamilton stands in front of the fence at the Miracle League field at the Hamilton Area YMCA’s Sawmill facility, where the league has planted corn in the outfield like in the movie “Field of Dreams.” (Photo by Dan Sczweck.) 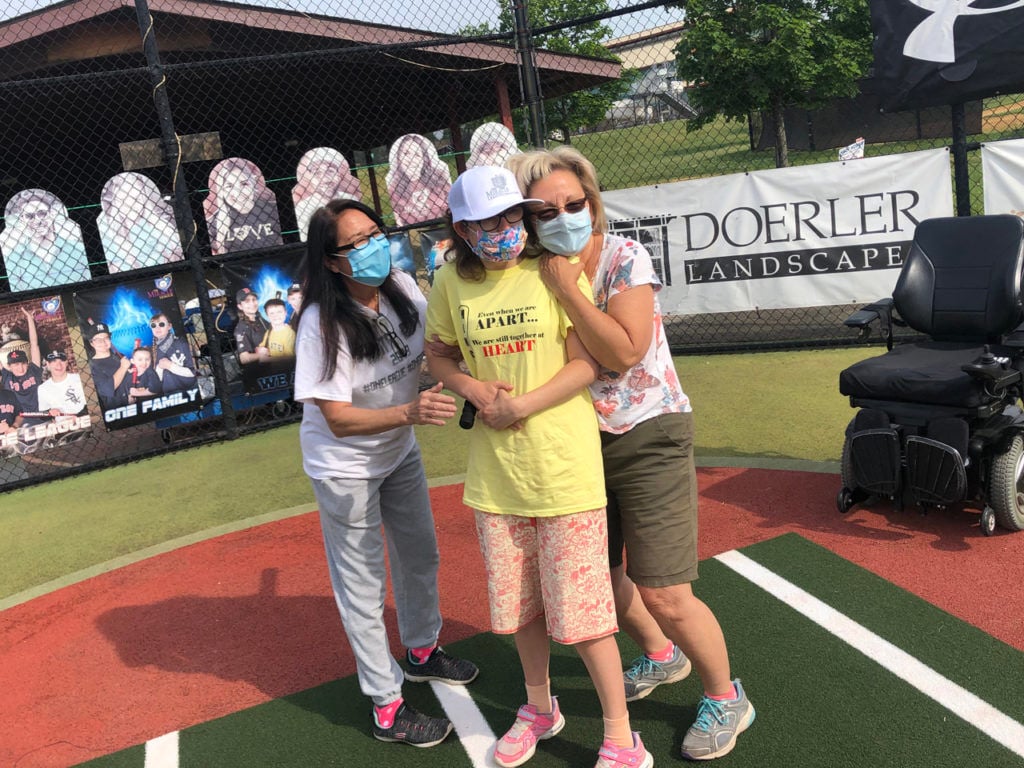 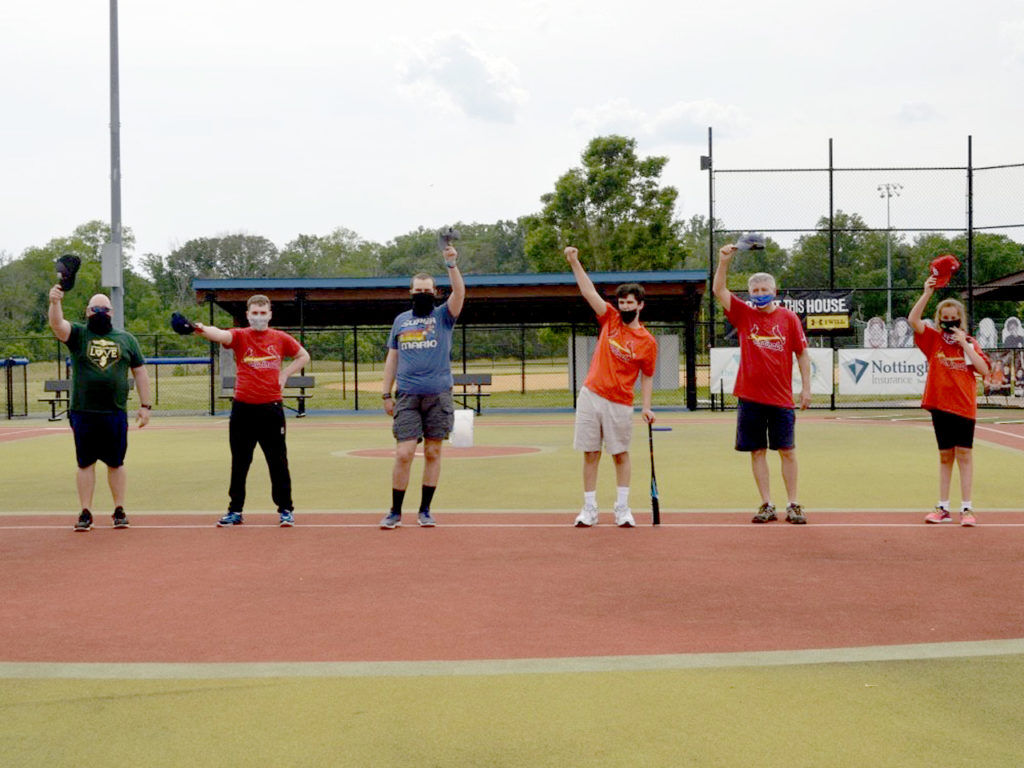 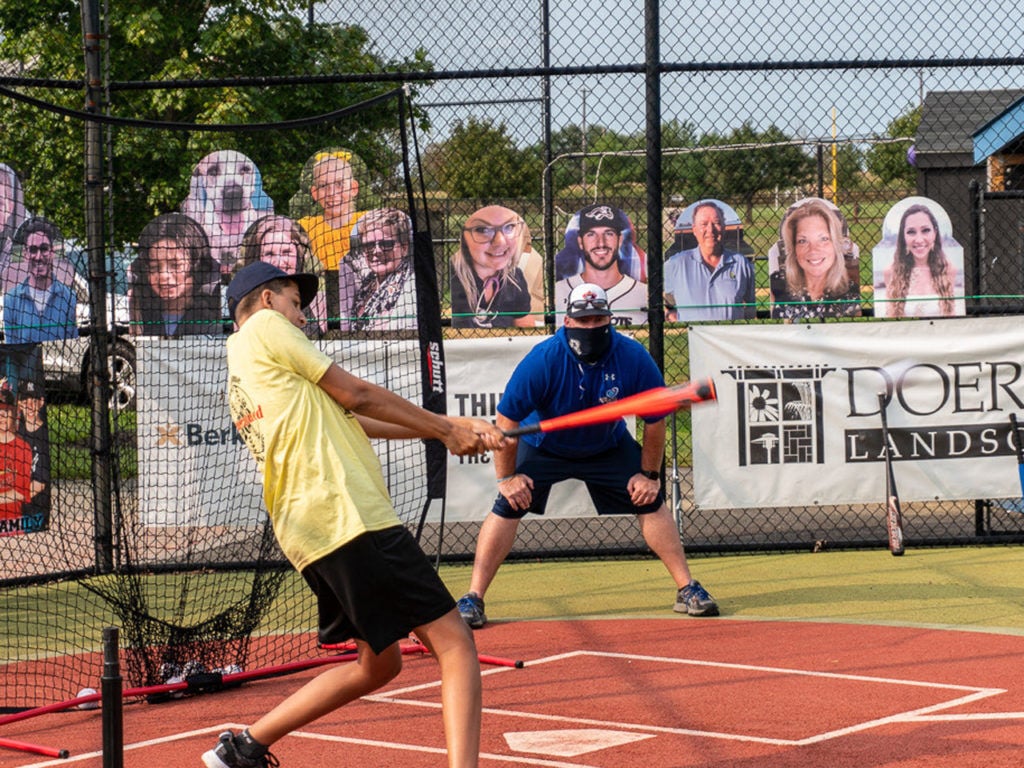 It’s safe to say that no enterprise or individual has been unaffected by the coronavirus pandemic. But when an organization’s entire mission is based upon inclusion and participation, having to spend more than a year apart can seem especially cruel.

The Miracle League of Mercer County has been a haven for people with physical or cognitive disabilities since 2005. Its barrier-free Miracle Field, located on the grounds of the Hamilton Area YMCA’s Sawmill facility, provides everyone with an opportunity to play baseball in a league setting.

The league was gearing up for its 15th year in 2020 when Covid-19 struck. There was no choice but to cancel the spring season, and as the lockdowns wore on, the fall season as well.

So when the league resumed play at Miracle Field in May for the first time in 18 months, it felt especially sweet for all involved.

And thanks to the adaptability of executive director Dan Sczweck and his staff, 2020 was not a total washout. Indeed, the Miracle League of Mercer County embarked on some new programs in 2020 that worked out so well, the organization plans to make them a permanent part of its programming.

“Obviously, Covid was an unprecedented thing that affected us all,” Sczweck says. “We had just completed our registration for the spring season. We were going to have a record number of 10 teams with 121 players, the largest amount of participation that we’ve ever seen. So it was devastating to say the least. But what you ultimately do is you try to quickly pivot and find other ways to stay connected.”

As was true for so many people and organizations, Zoom was involved. Sczweck would do a daily Zoom show for 30 or 45 minutes, where people could hang out and talk. The sessions were streamed on the Miracle League’s Facebook page. “We did it so it was like watching ESPN. It was a lot of fun,” Sczweck says. “It kept the kids engaged and let the kids see each other through Zoom. Just knowing that these families rely on us so much to provide respite, to provide some sort of program activity that’s inclusive, that’s fun — it’s something the kids got a lot out of, but the parents, the families got a lot out of it as well.”

The Miracle League also partnered with a couple of Hamilton restaurants to deliver food to league members’ homes. Killarney’s Publick House and Brothers Pizza were both on board with that program.

League members could call in to Killarney’s on Tuesdays with lunch orders, and Sczweck and his staff would do the deliveries. On Wednesdays, Brothers provided the lunches.

“That would give us a chance to mask up, socially distance and drop off the food,” Sczweck says. “It was the least we could do to physically see them from a distance and say hi.”

The Miracle League had plans for a big celebration for its 15th year, but was unable to carry them out. However, Sczweck and his team were able to start up a brand new program out at the field in the fall, one that gave participants their first look at the brand new “Field of Dreams” look at Miracle Field: now there was corn planted beyond the outfield fence, like in the 1989 movie starring Kevin Costner.

The Miracle League began offering one-on-one training for members, so that they could participate in activities at the field but without concerns about the dangers that crowds could have posed due to Covid.

“All of our Miracle League programming to that point was about inclusive play,” Sczweck says. “It was team structured, always, but what we decided to do was take players out and give them one-on one-instruction. They had never received instruction before, it was always more about having fun. But now we were able to teach them too.”

Sczweck says after the rollout of the new program, he had parents approach him and tell him that the training sessions were better than the occupational therapy that their kids were receiving at home.

“That was like the greatest compliment we could get,” Sczweck says. “What we saw was kids that in the past, not for any negative reason but just because of the way programs are structured, they would not have the opportunity to develop their skills. And now we saw in about eight weeks in the fall significant improvement in their motor skills, their hand eye coordination.”

Sczweck says it was a silver lining in the otherwise pandemic-warped year.

“Kids were throwing the ball with more accuracy and strength, learning how to field ground balls and pitch. It was kind of an eye-opening experience. After that I sat down with the board of directors and I said moving forward, we have to continue to do this. We can help these kids develop skill, it’s another option we can provide. So that’s something we’re continuing to do now. “

The 2021 spring league started back up again on May 22 with 10 teams and 76 players. The numbers are down from 2020 registrations, but considering that many members of the league have conditions that can affect their immune response, caution in terms of returning to group activities makes sense.

The league has also made adjustments to its format in order to maintain the safest environment possible for the players. Team sizes are smaller than normal, and teams will not play head to head to minimize exposure risks.

The league’s “angels in the outfield” program, for community members who paticipate in the league even though they themselves do not have any special needs, will be tabled for the spring. Only immediate family members will serve as buddies on the field.

“There is a lot of hope, everyday we’re seeing more from the CDC, the president, the governor is relaxing these guidelines, so we’re going to keep our fingers crossed that come the fall, we’ll have a more traditional form of league play,” Sczweck says. “But just to see kids on the field [in May], I can’t believe it’s been this long. I hear from so many families about how they just missed this league, and these games so much and how much it’s meant to them. see so much excitement and willingness to come back, it really is heartwarming. On so many levels, it’s so exciting and relieving to see we’re finally returning to some form of normalcy.

For those who cannot yet return to the field, Sczweck says the Miracle League will continue to provide programming, virtual and otherwise, for those individuals. “Everyone’s still going to be a part of this league, whether or not they’re at the field in June and July,” Sczweck says.