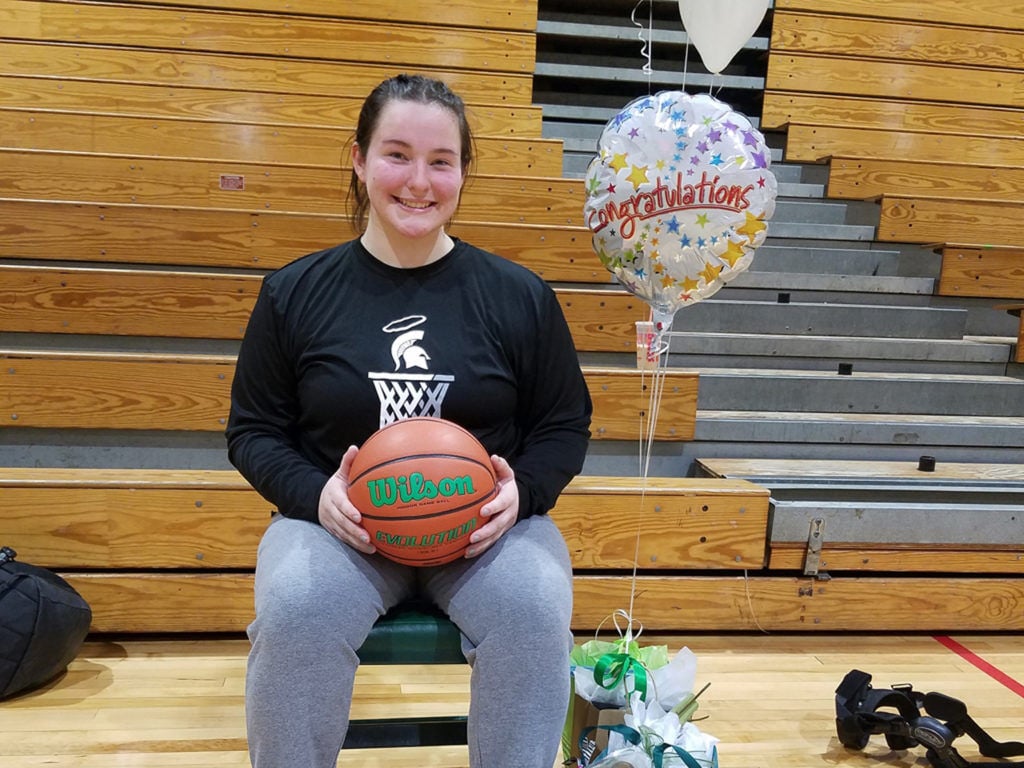 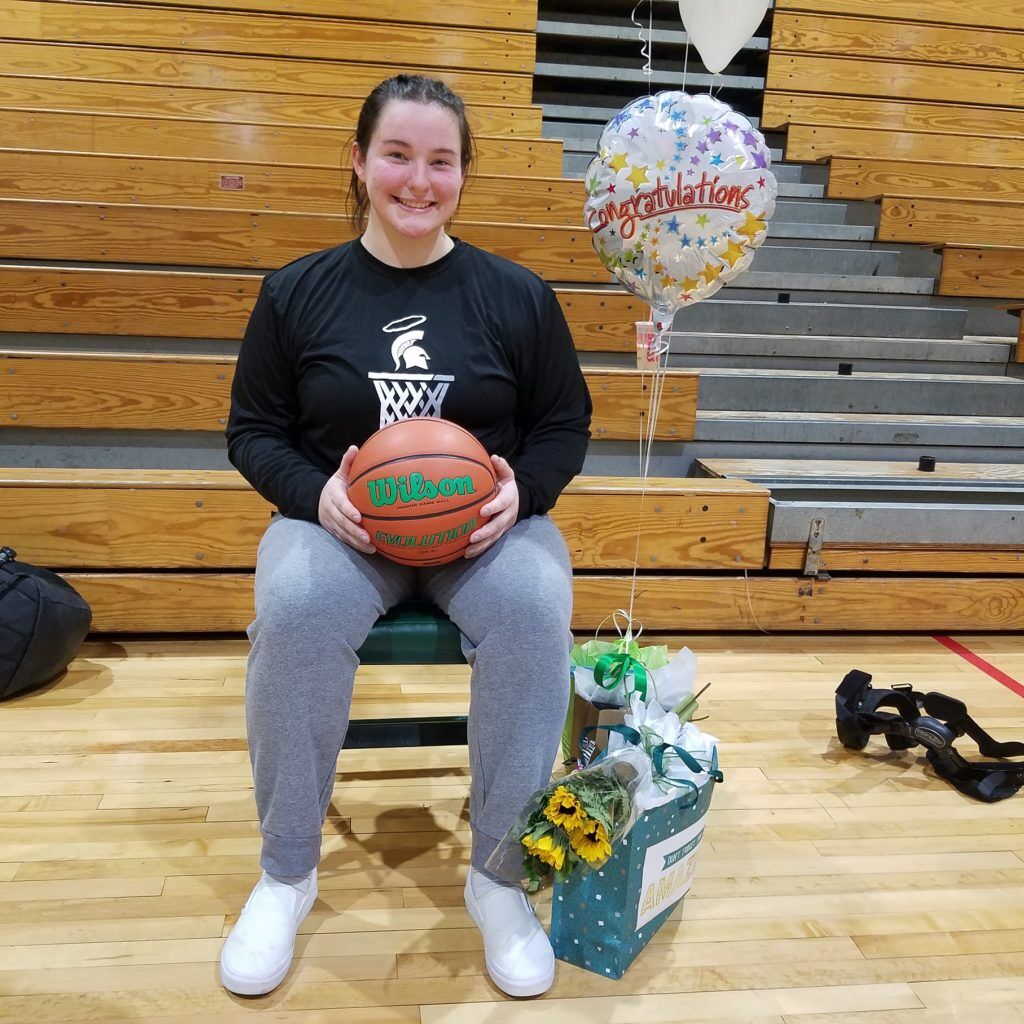 As a head basketball coach, Kristin Jacobs has been very lucky when it comes to Hope Mauro.

As an assistant track and field coach, she has been very unlucky.

The snake-bitten Mauro has twice torn her ACL, either toward the end or after the basketball season, meaning she had to miss throwing the shot put and discus in both her sophomore and junior years. Everyone missed last year due to Covid-19 shutdowns, of course, but Mauro would have missed it either way.

And as much as Jacobs is proud to own the school shot put school record of 36-feet, 4-inches, set in the 1996 Mercer County Meet, she is hoping Mauro stays healthy enough this year to break it.

“She’s a tremendous thrower,” the coach said. “I hate to say it, but after 20-something years, when she gets a chance to break that record, I think she can do it.”

Mauro, whose career best throw was 33-8 at the 2018 Central Jersey Group III sectionals, laughed when informed of that.

“Yeah, freshman year I went to states and I was about two or three feet away from it,” she said after the Spartans Senior Day game with Hightstown Feb. 13. “I have to get back in the swing of things. I’ve been out for two years so hopefully I can pop back in and go right back to that. “

Fortunately for the basketball team, by midway through a shortened season this year she had maintained her health and was her usual dominant self under the basket. A large brace on her right knee served as a reminder of what she had been through.

“My job is in the paint,” she said. “Rebounding, out-letting to other players, hopefully getting some fast breaks. “

Through the Spartans first five games (Steinert missed two weeks due to a Covid shutdown), Mauro was second on the team behind stellar sophomore Isabella Bonacci in scoring and rebounding. What she lacks in height, she makes up for in strength.

“You just box them out,” Mauro said. “You just have to push them around a little bit. Don’t foul, but move yourself into it. You need to take that spot. You want that spot, you just gotta have it.”

“She is just a beast underneath there,” Jacobs said. “Having her and Bonacci we have a nice tandem of big girls.”

But Mauro’s worth is not solely measured by statistics. Coming back strong from two knee surgeries is inspiration in itself to her teammates.

“Just the dedication is impressive,” Jacobs said. “She looks better than she did from the first time she came back. Her leadership, her rebounding, her defense has come to full fruition for her in her senior year.”

It sure hasn’t been easy, however. After playing in the Hamilton PAL, Mauro played travel ball and joined the AAU Mavericks, coached by Jacobs. As a freshman, she played well for the JV and got called up to varsity midway through the season, although she did not play.

“My freshman year was a little intimidating,” Mauro said. “I was the only freshman that moved up at mid-season and I was by myself. It was just so weird. But luckily, the girls I played with took me right in, I made friends and was able to get on that court and feel comfortable, especially going into my sophomore year. “

Mauro was a full-time varsity player in 10th grade and came off the bench to provide depth inside until February, when she tore her right ACL, MCL and meniscus. That put her out of action for the post-season and the entire track season.

Mauro worked hard to rehab herself and was back on the court and ready to go on opening day of her junior year. She played in all 25 games and was out throwing at track practice before Covid shut everything down on March 17. At that point, she went for an MRI as the right knee began acting up.

“It just wasn’t feeling right,” she said. “I went to the doctor and they told me I tore 90 percent of my ACL again.”

She needed surgery, but that was easier said than done. Due to the over-crowding of hospitals with Covid patients, Mauro’s operation was put off until May 6, leaving her basketball season in jeopardy.

“They told me I wasn’t going to be cleared until January,” Mauro said. “It was really up in the air if I was going to be playing this season. It was tough to hear. I was just like ‘Wow I have to go through almost a year’s process again.’ I was just getting back into my good game throughout the season. It definitely took an emotional toll on me.”

But she put in the work and, as it turned out, she did not miss any time since this season did not begin until late January. Mauro was, however, behind on her training.

“After the first surgery I was able to come in to fall basketball and get back into game,” Mauro said. “This year I wasn’t able to pick up a basketball until tryouts. So it was definitely a big adjustment for me. I had to play it by ear and get myself personally better while trying to get better on the court.”

Mauro has done all that, and Jacobs spews nothing but superlatives for her gutsy forward.

“She has been through it all and she’s battled back each time,” the coach said. “She’s also an amazing student. I taught her in eighth grade. I also coached her at camp. The leadership qualities she brings are great. She’s always including kids and making sure everybody feels like this is their home and this is their family.”

Mauro, who hopes to major in elementary education, has narrowed her college choices to Ramapo, The College of New Jersey and West Chester. Before then, she hopes to make a run a Jacobs’ shot put record. Whether she does that or not, Hope will always be grateful that her injuries did not keep her off the court.

“’I’ve played basketball since I was in fifth grade,” she said. “I started track my freshman year and ended up being kind of good at it, so I do enjoy track. But basketball is definitely where my heart is at.”

Fortunately for Mauro, her knee helped keep her heart happy.