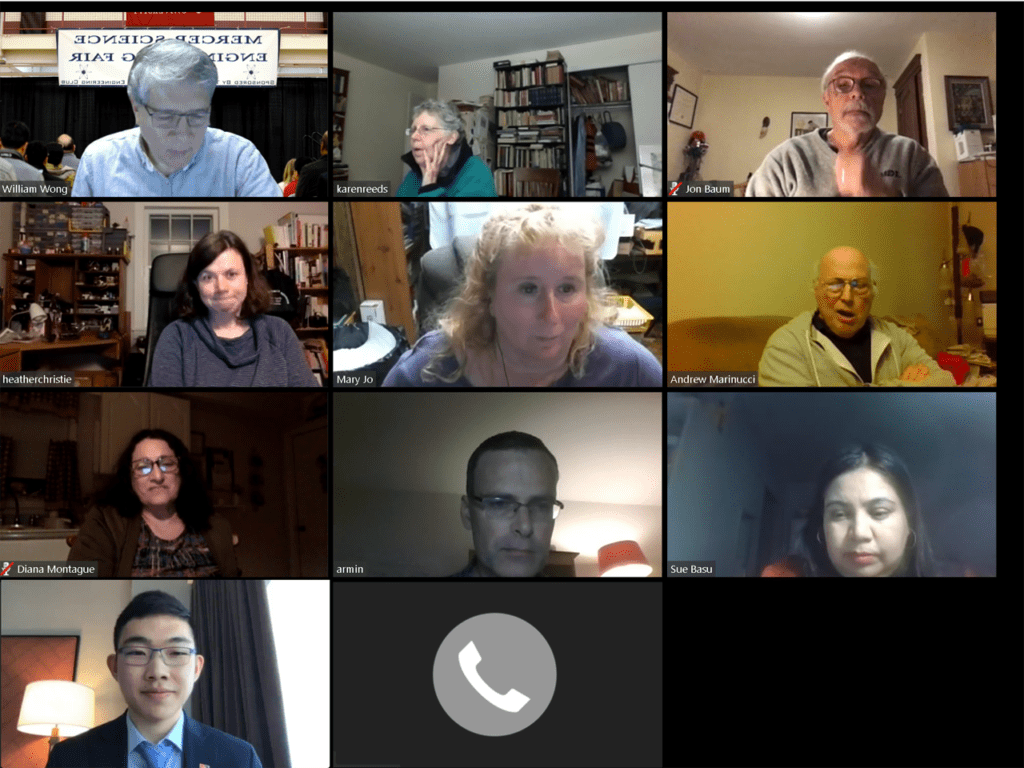 A screen shot of judges participating in a Zoom chat for the Mercer Science and Engineering Fair. 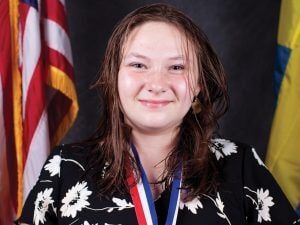 The Mercer Science and Engineering Fair that has been going on for more than 50 years, continued to uphold its spring event amid coronavirus community restrictions, by moving all projects and judging online.

Hosted by the Mercer Science and Engineering Club, this year’s fair featured 77 overall student participants who submitted their projects online through the club’s website and were judged remotely through a series of Zoom video chats.

“We decided that we definitely wanted to keep the fair going,” said Jonathan Allen, secretary of the club and a 34-year resident of Hopewell Township. “The students had put in all the work of creating their exhibits…so we felt it was our duty to do the very best we could to make sure the fair went on.”

Club president William Wong helped make the decision to move the fair to a virtual platform. The organization received only three days’ notice that their normal location at Rider University would not be available due to the college shutting down for Covid-19 concerns.

Once the decision was made to move online, Wong made modifications to the club’s website to allow for additional student uploads, including images of project displays, research documents and all related artifacts. Further tweaking on the website was done so judges could access the submitted content.

The judging was pushed back about a week to accommodate the new upload requirements for students and to properly set up Zoom chats.

In addition to moving all visual displays and content online, the 19 participants in the senior division held interviews with judging panels through Zoom.  Each student was allotted a 15-minute interview where they could visually present their project and answer questions.

The virtual experience certainly had some downfalls, such as the lack of socializing among participants and judges, but also brought up discussions on what parts of the process could be used in the future.

“We’re going to be changing some of the stuff that we did online for next year even if we wind up doing things in person,” Wong said. “In particular, having the materials uploaded to the website allowed the judges a lot more time to view things.”

Other changes were seen in the prizes awarded to students. The grand prize winner and first runner up received awards of $500 and $200 respectively, since the original trip to the Regeneron International Science and Engineering Fair was canceled due to coronavirus concerns.

This year’s senior division grand prize winner was Sonja Michaluk from Hopewell Valley Central High School. This is Michaluk’s senior year, which means it is her last time presenting at the fair after participating for the last six years.

Michaluk’s project was a continuation from her grand-prize-winning project last year.

Through her research, she developed a way to test the long-term quality of freshwater by effectively identifying subspecies of insect larvae.

Using DNA barcoding, Michaluk looks at the insects’ genetics and finds the exact subspecies in an area, allowing analysts to gain insight to what the water quality has been like.

“DNA barcoding is not that hard to do but she’s adapted it and figured out how to make it work for this particular problem, and she’s hoping this will be a benefit to researchers who want to study the history of quality in water,” Allen said.

The first runner up was Michael Zhang of the Lawrenceville School, from Palo Alto, California. Zhang’s project showed a way to increase the sensitivity of detecting opioids in solutions such as urine and blood.

The second runner up was Hillsborough resident Philip Voronin, who designed and built the “Freedom Chair,” a cost-conscious wheelchair for quadriplegics with a mechanical arm all operated by breath through a puffer sensor.

These winners are set to compete in the 2020 Broadcom MASTERS Competition.

For more information on the Mercer Science and Engineering Club and the 2020 fair winners and their projects visit, www.mercersec.org.