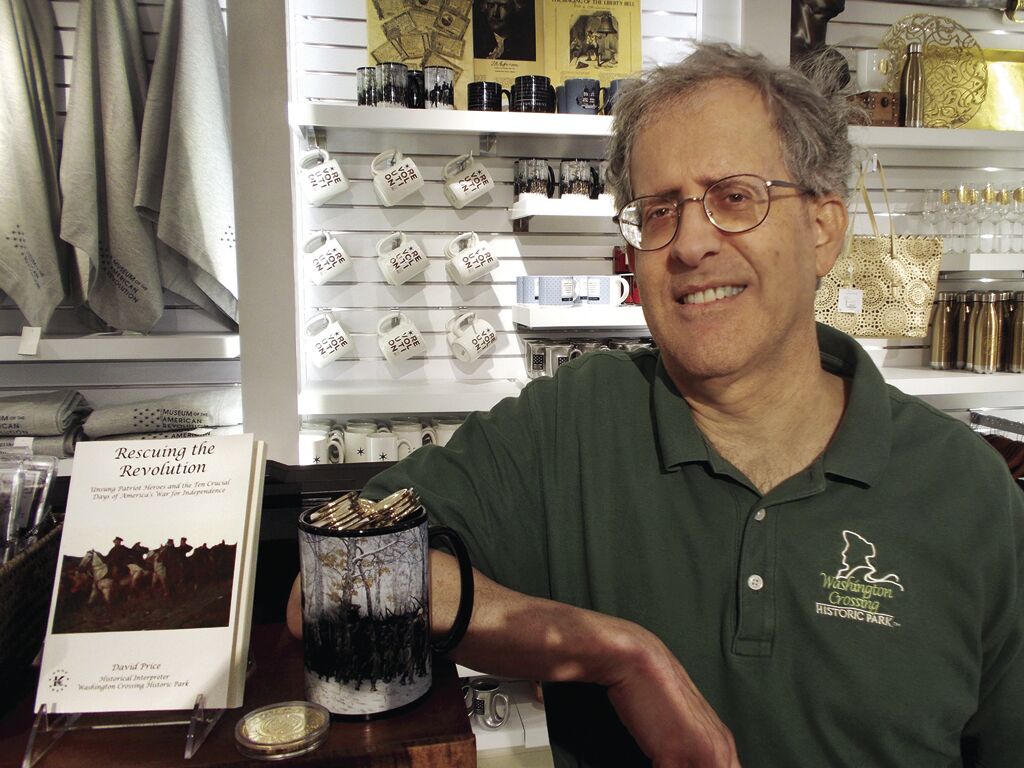 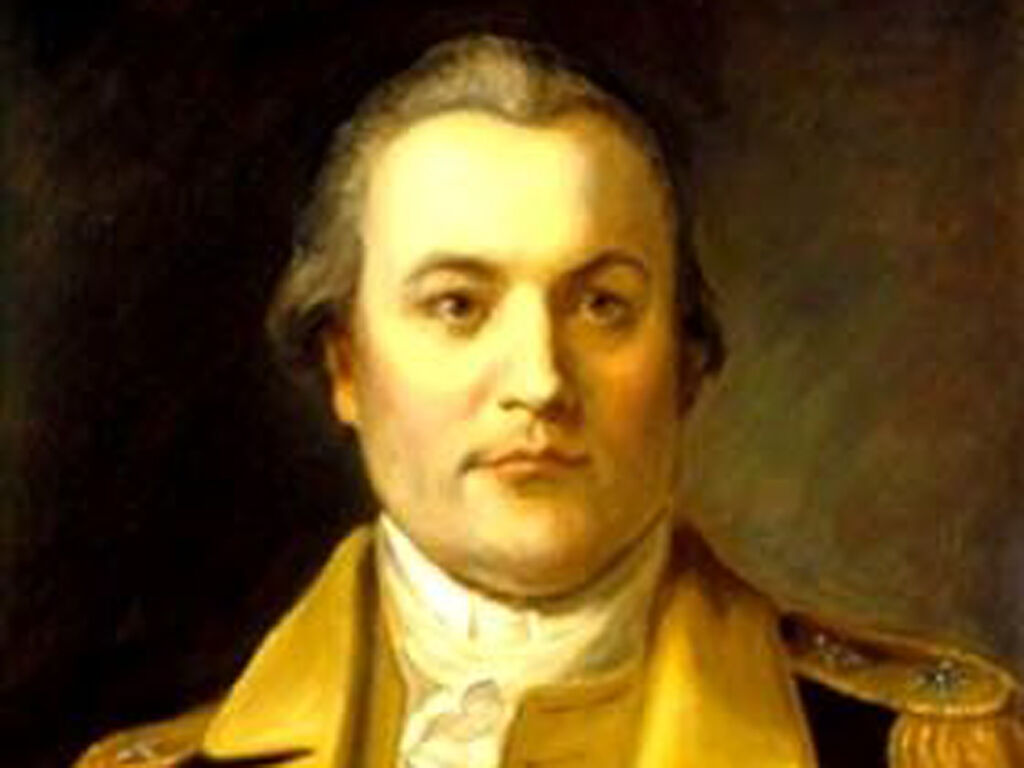 “The morning of January 3, 1777, was a bitterly cold one in Princeton, New Jersey,” writes Lawrence Township author David Price in the first chapter of his new book John Haslet’s World: An Ardent Patriot, the Delaware Blues, and the Spirit of 1776, just released by Knox Press.

As Price continues bringing local history alive, “Colonel John Haslet found himself on a frozen battlefield with the other soldiers of George Washington’s Continental Army who had faced one hardship after another, both before and during their grueling winter campaign, in pursuit of a young nation’s quest for independence from Great Britain.”

Then he brings the reader closer to that day that unfolded 244 years ago.

“Haslet would have been able to see his breath in the frigid air as the British soldiers and their colonial counterparts engaged in yet another clash of arms, and with his last exhalation he attempted to rouse his fellow countrymen to stand against their advancing foe.

“In that moment, this Irish immigrant’s American journey came to a sudden and violent end.

The wrath of fate that created an abrupt encounter between an enemy bullet and lion-hearted colonel achieved a cruel outcome but perhaps one befitting his tireless efforts to inspire those around him in a cause for which he was willing to make the most extreme sacrifice.”

Price, too, was inspired and says in his preface, “(It) represents my third venture in writing about America’s War for Independence from Great Britain, with a particular focus on the period from December 25, 1776, through January, 3, 1777.

“Price is a historical interpreter at Washington Crossing Historic Park, Pennsylvania, and the author of Rescuing the Revolution: Unsung Patriot Heroes and the Ten Crucial Days of America’s War for Independence and The Road to Assunpink Creek: Liberty’s Desperate Hour and the Ten Crucial Days of the American Revolution,” states Price’s about the author section on Amazon.”

“Under the auspices of the Friends of Washington Crossing Park, he conducts guided interpretive tours at this Registered National Historic Landmark and site of the Continental army’s crossing of the Delaware River in 1776, focusing on the ‘Ten Crucial Days’ of the American Revolution and other historical aspects of the park.

“David is also a historical interpreter for the Princeton Battlefield Society at Princeton Battlefield State Park. He holds degrees in political science from Drew University and Rutgers University–New Brunswick, and was a nonpartisan research analyst with the Office of Legislative Services of the New Jersey Legislature for thirty-one years. He is a member of various national and regional organizations relating to the American Revolution.”

Rescuing the Revolution, Price’s initial literary effort, was about a select group of largely unknown patriot stalwarts whose heroics contributed to the legendary triumphs that were part of this remarkable saga.

In the preface to his new book, Price says that the work “at hand takes a further step along the path laid out in the earlier titles by focusing in part on one of the individuals whose feats where highlighted therein,” and that Haslet “was the only one of the unsung heroes portrayed in my first book to lose his life on a Revolutionary War battlefield, and perhaps therein lies the motivation to explore his story at greater length. I feel I owe John Haslet that much.

“There is an elegiac symmetry between his fate and that of the Delaware Regiment he commanded. Both suffered through extreme adversity and finally were lost in the struggle for a young nation’s independence during the period when that cause seemed especially imperiled and was then suddenly revived by the most remarkable military comeback in America’s storied past.”

Price follows with his intent to chronicle “the inspirational leadership, exemplary service, and enormous sacrifice that marked their efforts on behalf of America’s Revolutionary enterprise.”

He then adds that “one finds no dearth of encomiums to Haslet’s leadership from his contemporaries or in more recent accounts. He has been described as one of George Washington’s steadiest, most reliable officers and finest regimental commanders; ‘beloved by his men, whom it was his pride to have exceptionally well drilled and disciplined’”; and “charismatic, inspirational and eloquent, someone who persuaded men to sign onto the newly formed army with his strong convictions. And in the end, he met a hero’s death on the Princeton battlefield.

“In his acclaimed mid-19th century biography of George Washington, the noted author and essayist Washington Irving opined that Haslet ‘distinguished himself through the (1776) campaign by being among the foremost in services of danger. He was indeed a gallant officer, and gallantly seconded by his Delaware troops.’”

Price says the accolades earned by Haslet and his regiment “convey a sense of how superlative their service was during the adversity of 1776 when Washington, staggered by one defeat after another, attempted to survive the onslaught of a militarily superior foe and carry on the Revolution against what appeared to be truly daunting odds.

“At the same time, the standard of excellence that these Delawares set, and the inspiring example they provided for the rest of the Continental army, put into stark perspective the extent of their sacrifice and made all the more harrowing the demise of the unit, including the commanding office, before it was replaced by a reconstituted Delaware Regiment in 1777.”

And Price writes that Haslet’s kind are not ranked in the annals of history with the likes of the nation’s founders and will never be extolled like Washington, Adams, Jefferson, and Franklin, “but to his generation men like Haslet loomed large indeed, for they carried on their sturdy backs the quest for political and economic autonomy and national sovereignty against the British Empire.

“Some like Haslet were forced by unyielding circumstances to pass that effort on to others who saw it through to completion. And the men of his regiment set an example for other Continental army units to follow and, in the process, carved a place for themselves in Revolutionary lore.”

Price sums up the historical importance of the efforts of Haslet, the Delaware unit, and the others of his kind with the following observation: “The significance of the American triumphs during the ‘Ten Crucial Days’ was recognized at once by sundry observers of these vents and somewhat later by others. They included participants on both sides of the conflict and neutral parties as well.”

Price then reports that “Frederick II, the Prussian ruler who made his kingdom the premier European military power of the 18th century and become known as Frederick the Great, asserted that the feats of ‘Washington and his little band of compatriots’ during their winter offensive were ‘the most brilliant of any recorded in the annals of military achievements.’

“The fiery pamphleteer and Revolutionary advocate Thomas Paine, writing in The American Crises, declared that the ‘conquest of the Hessians at Trenton by the remains of a retreating army . . . is an instance of heroic perseverance very seldom to be met with. And the victory over the British troops at Princeton, by a harassed and wearied party, who had been engaged the day before and marched all night without refreshment, is attended with such a scene of circumstances and superiority of generalship, as will every give it a place on the first line in the history of great actions.’

“(And) Nicholas Creswell, an English traveler who was then in Virginia, but hoping to return to the mother country, recorded his displeasure at the news of the rebel gains in his diary entry of January 7, 1777: ‘The minds of the people are much altered. A few days ago they had given up the cause for lost. Their late successes have turned the scale and ow they are all liberty mad again. Their recruiting parties could not get a man (except if he bought him from his master) no longer since than last week, and now the men are coming in by companies.”

More than another book on the American Revolution, Price’s work uses his years of expertise and love of history to write a fresh chapter and tell the story of a man who embodied the yearning for a nation built on the premise of equality and the inalienable rights of life, liberty, and the pursuit of happiness.