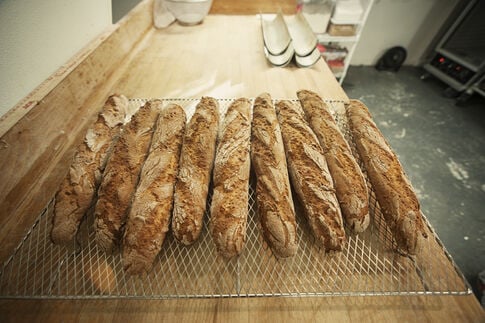 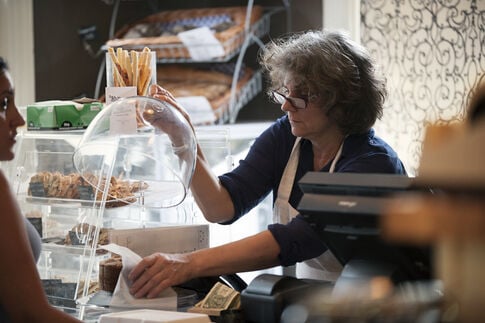 Gluten-free breads are among the offerings at WildFlour Bakery/Cafe. (Photo courtesy of Jennifer Cabral and Eugene Price.)

Eclectic. That’s how WildFlour Bakery/Cafe owner Marilyn Besner describes her gluten-free menu. The panzanella salad is an Italian recipe recommended by a local farmer. The cheese puffs are inspired by a Brazillian recipe shared by a customer. The challah and honey cake recipes are inspired by Besner’s Jewish background.

When the wind blows seeds from different flowers into the same spot, a patch of wild flowers grows, Besner said, and that’s how she thinks of her eatery.

“Our food doesn’t come from one particular tradition,” she said.

“We’re a small operation,” Besner continued, adding that doing things with a personal touch is an important aspect of the café.

“We do things our way … but accommodate people’s requests whenever we can,” Besner said.

For instance, scrambled eggs aren’t on the menu, but if someone asks, Besner can make them. On the other hand, the café doesn’t serve hamburgers or hot dogs. And they don’t serve ketchup, she said.

What they do serve is a variety of condiments that accompany their crepes. The cilantro mint chutney is a refreshing and herbal compliment to the mustard seed, turmeric and lemon spiced potato filling. The garlicky yogurt is a traditional accompaniment to the eggplant filling as it equalizes the calcium dynamic of the plate, and the muhamarra is simple and mellow flavored by grilled red pepper, walnuts and molasses, Besner said.

One of the popular crepes is made with greens, onions and goat cheese with red pepper muhamarra. There are three different dessert crepes, and the breakfast menu features pancakes and a yogurt parfait. They also serve sandwiches, salads, soups, desserts, smoothies and juice. Among the bakery offerings, there is a high demand for bread and cakes, Besner said. You don’t have to be allergic to wheat to enjoy WildFlour’s offerings.

Like the menu, the cafe’s atmosphere is eclectic and unique. The walls are painted in a soft silver hue adorned with fabric art and original paintings. Vases made by Besner, who is a potter, accent several shelves. The rooms have a clean and zen feel about them.

“Working with art is natural to me,” said Besner who has run a gallery and framing shop in Montreal.

There are also two upstairs rooms where the café has already been host to a study group and a book launch. One of the rooms is a Wi-Fi spot where customers work on their wireless devices.

Besner, a native from Montreal, Canada, lives in Princeton with her husband Fred Appel, an executive editor at Princeton University Press, and her two daughters. Her friends have become a family away from home, and preparing food for everyone is one of her favorite pastimes.

She became interested in gluten-free cooking because one of her friends has celiac disease, a condition that causes an allergic reaction to wheat gluten. After being praised by many friends for her culinary skills, Besner considered the idea of cooking and baking professionally.

She took classes at New York’s Natural Gourmet Institute and the French Culinary Institute, and secured a job at Princeton’s Whole Earth Center, where she worked for about four years as a cook and baker. During that time, she also worked as a co-owner of Moonlight Bakers for about two years until 2011.

In November 2012, when Besner learned about a property on Main Street that had a gluten-free kitchen, she contacted the owner hoping to rent the space. When the owner mentioned she was thinking of selling the place, Besner responded, “I think I should buy it.” So she did.

Bresner compared the events that followed to a ball rolling off the top of a hill and gaining momentum. Everything happened quickly. The deal was made in December, and WildFlour Bakery/Cafe opened in May 2013.

She found a baker through Bread Bakers Guild of America who developed several recipes for Besner using gluten-free flour blends. The flour, not surprisingly, is of utmost importance. The bakery uses flours made from brown and white rice, sorghum, millet, potato starch, tapioca and buckwheat.

Besner is undaunted by the fact that other businesses have come and gone at this location, saying that what she offers is unique. She is happy operating a bakery/café in the circa 1800 building that had originally served as a family’s home.

And customers are happy as well, Besner said, with the exception of a few people who don’t get why the café doesn’t serve ketchup.

“People stop in and say they’ve heard so much about us. People say they want us to stay,” Besner said.