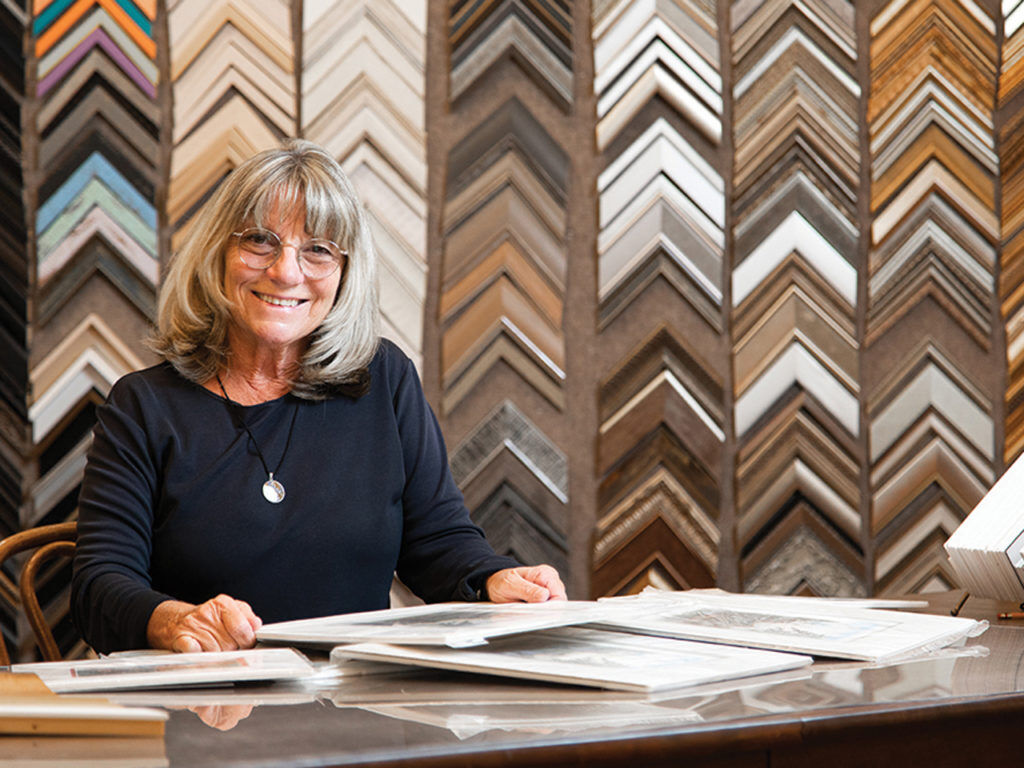 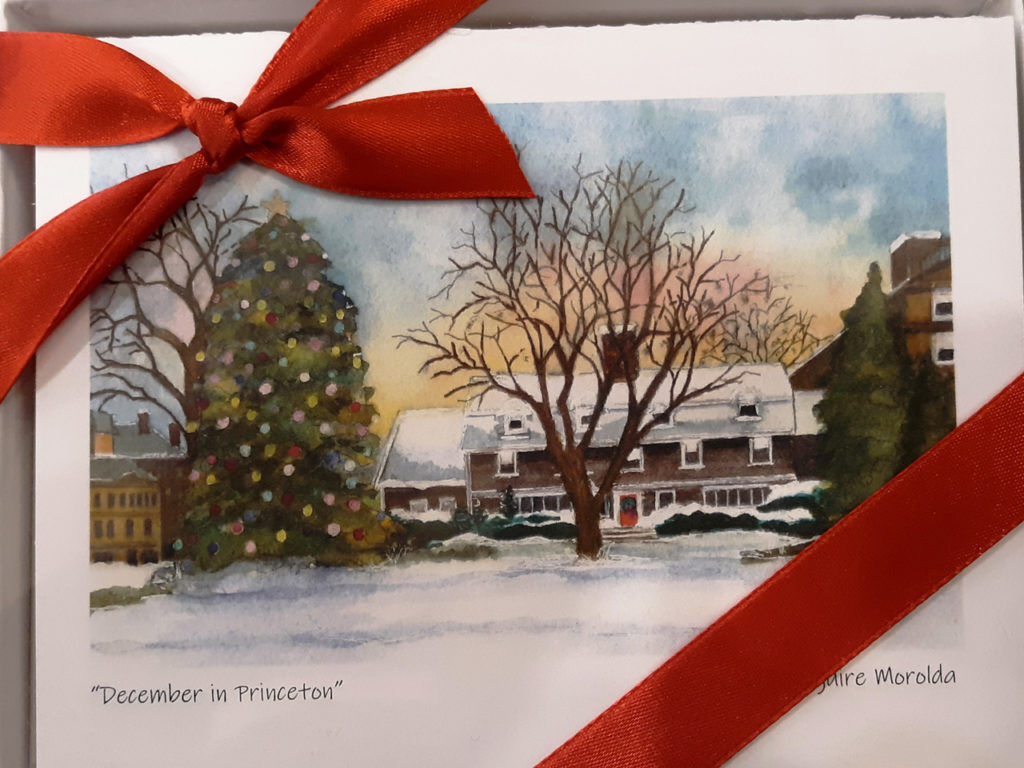 The pandemic may be putting a cloud over the 2020 holiday season, but at the Cranbury Station Gallery on Hulfish Street in Princeton it’s still the most wonderful time of the year.

That’s where owner/operator Kathleen Morolda’s series of holiday images based on the lyrics of “It’s the Most Wonderful Time of the Year” are on back on view, along with other holiday themed images, in her shop’s windows and on its walls.

Morolda says she started the series in 1997 by pairing a stylized watercolor of a row of snow-covered homes with the song’s shortened title – “The Most Wonderful Time.”

She then followed up the next year by coupling a seasonally decked home with the song line “When friends come to call.”

From there Morolda continued an annual mixing of quaint holiday-ish scenes with lyric snippets – “With those Holiday Greetings,” “Glad Happy Meetings,” and “Christmases, Long, Long, Ago.”

Then she added her own twist by bringing the season closer to home by using images from closer to home and from the region – that includes the tree lighting at Palmer Square, crowds gathering to attend McCarter Theater’s “A Christmas Carol,” holiday shopping on Hulfish Street, and the seasonal shops in downtown Cranbury – near where she lives outside of town and operates her original gallery that gives the Princeton one its name.

While Morolda stopped the series in 2011, she continues to display the work and use her original watercolor paintings as the source of the collection of small prints — approximately 8 inches by 5 inches – displayed and sold in her shop.

Other seasonal images of snowmen and Christmas trees can be seen along the walls where she hosts Zoom sessions that help virtual attendees create holiday cards – like the Princeton holiday cards she sells along with her own work and paintings by Sydney Neuwirth.

With holiday tunes serving as background music in her shop, Morolda is sitting at a work table to share some thoughts hone by 30-some years in the art business.

Looking out the window onto Palmer Square, she says, “The shopping is done for Christmas. No one has shopping bags.”

She says for many bricks-and-mortar retailers “the internet was killing us in the first place.” But now the pandemic has created “the perfect storm.”

And while this year may not be the most wonderful for business owners of all types, she mentions her supportive clients and is putting her hopes on a future in framing. “Not everyone is going to have works professionally framed but there are enough. We cut the frames and the glass. And just before you came a lady called and needed things done before Christmas.”

After estimating that framing is 85 percent of her business, she looks over at the wall of paintings and says that for the past several years she has seen a drop in selling artwork and likened it to a slot machine and luck. “If I sold a painting I’d go ‘Wow!’ Framing is the bread and butter.”

Yet artwork sales do happen, and Morolda points to several framed Palmer Square tree lightings selected as gifts to family members who now live across the nation but last celebrated together at the lighting.

Asked about the inspiration for the holiday selections, Morolda the artist — who unabashedly celebrates the bright and familiar — lets Morolda the business owner answer, “My rent. I make (the works) small. Nobody wants that to be the focal point of their living room. It’s a nice gift.” The prints go for $30, $75 matted, and around $125 framed.

She says she sold prints and cards during the tree lighting but that won’t happen this year, and she hopes people will visit during her reduced hours – supported by the Palmer Square Association that required specific hours.

She also says she has appointment hours, instituted when pandemic measures were implemented and she had to reduce staff.

“From what the people are telling me, they appreciate the appointments. People feel secure (about maintaining social distancing), so that’s been good. I don’t have enough business to have two people here. By doing the appointment they have my undivided attention.”

She says she was lucky that before the pandemic hit, she had a number of framing jobs in the works, and other jobs come in what she sees as gestures to help her. “(The pandemic) has bought out the nicest people.”

To give an example, she says a woman from West Windsor called and asked her to frame a set a pictures taken by her handicapped daughter who was moving into a new apartment. “She did the whole apartment in the girl’s photographs. We the mother saw them she cried. I know she called me because she wanted to give me business. I have so many people who want us to succeed.”

She also has the support of organizations. “Princeton University has been good to me. They’ve given me a lot of framing work,” she says, noting that she is a preferred vendor and certified woman business owner.

“I hit a nerve with the paint parties,” Morolda says about another way of keeping the gallery viable.

It started several years ago when one of her gallery employees attended one as part of a series of wedding activities and had a positive experience.

Morolda says she tried it just as venues offering wine and painting sessions were opening in the area. “It really took off. It wasn’t a paint and sip. You were welcome to bring what you wanted. But I wanted an older crowd.”

In addition to becoming team-building experiences and fundraising opportunities for groups, she also saw individuals coming in for personal benefit. One was stress reduction or mood improvement. “On open house nights, they would come by themselves. Painting doesn’t have to take talent, it relaxes them.”

It also builds human connections. “There are times when someone signed up because they have breast cancer. Then someone else says they to, too.”

While looking forward to the return of the physical parties, she says she is finding that people are being creative in organizing virtual painting events, such as the area grandmother who is organizing one so her children and grandchildren around the country can participate by Zoom and share images.

Morolda’s interest in art and well being are connected to her upbringing.

Born in West Orange and raised in Woodbridge, New Jersey, she was the daughter of a nurse, who gave up the profession to raise her children, and a father who worked in transit advertising.

“Both were artistic. My mother was very creative. My father didn’t draw but came up with the concepts for the buses and subways,” she says.

She then adds, “My father always had signs. They were silkscreened then. If they were flawed, I could draw on them. And there was a smell of the paint. I loved the smell and the artwork on the signs. I used to look at the paintings. The colors were always brighter than they needed to be.”

While she was attracted to art and focused on it at high school, she followed her parents’ warnings about a life in the arts. “My dad used to say when he needed an artist the line was around the block. But when he needed someone to run the business he couldn’t find anyone.”

She says she decided to get a business degree from Middlesex County College first and then look for her way into the arts.

That path came when she got a job working in the art department for the Central Intelligence Agency in Washington and attending night art classes at George Washington University.

“We made films on how to file documents and made signs. We used clip art,” she says about her first CIA experience.

It was followed by returning to the New York City area to work in a division that compiled information regarding American businesses overseas and then participating in public event planning.

“It was nothing exciting,” she says of her years with the organization. “But it was pretty cool. I would love to tell you spy stories, but I don’t have any.”

She says her move to Cranbury and Princeton came through her husband’s career in agriculture.

Also raised in Woodbridge, her husband had studied agriculture at Rutgers University in New Brunswick. His advisor lived in Cranbury, and Morolda would visit the town with her husband. They decided to live there when he took a job working for Ocean Spray. He eventually worked for and retired from the U.S. Department of Agriculture.

The house they purchased 41 years ago had a blacksmith shop that the couple converted and gave Morolda the opportunity to do what she says she always wanted to do: start her own business.

“I was a business trying to find a goal,” she says. “I had the shop but didn’t know what to do with it. I wanted to paint, but I had the starving artist in my mind.”

Then she remembered an experience she had in Washington, D.C., and bought an inexpensive print of Andrew Wyeth’s “Christina’s World” and decided to have it framed. And while she had not considered the cost of framing, she was intrigued by how the frame made the picture “look beautiful. And the guy who owned the frame shop said it was good way to make money and then you could paint.”

She says she started the gallery and started working with interior designers to find painters who would do small images. But when one wasn’t able to deliver, she says she decided to do it herself. “It was just what she wanted, so it gave me some encouragement. I started painting and someone from (an artwork distribution company) came and said, ‘This is yours?’”

The result was that they worked out an arrangement for a series on the season that was printed and on sale in East Coast art shops.

After expanding her gallery in Princeton, she saw a need to create Princeton images that could easily fit into a visitor’s suitcase and said that up until the last few years her works sold well at Princeton University’s reunions, now more relegated to the university campus, and the pre-pandemic holiday season.

“What I love is watercolor,” she says about her preferred medium. “You get more money for oils, but watercolors are more difficult. I do both. My real love is the watercolor.”

She says, “Almost all my paintings are from photographs. I got the inspiration from walking around and talking a picture and seeing what I could do with it. I liked to do a lot of flowers.” The Princeton scenes were made by listing requests by visitors looking for specific places.

In addition to her own work, Morolda also carries paintings by noted Princeton artist Sydney Neuwirth. “I met Sydney through the Princeton Ballet. My daughter was there. And Sydney was involved when they did a fundraiser. She donated a painting, and I donated a frame. We hit off and from there we started showing her work.”

Referring back to the street traffic, Morolda says it is sad to see how the pandemic has kept people from doing face-to-face business and hopes people don’t forget how important actual businesses are to the community.

And while she says she’s in “a good place” to offer community members the opportunity to purchase localized gifts for office parties or visitors the ability to purchase local gifts at affordable prices, she adds, “I have no idea of what will happen. We have nothing to compare this year with. But I am I am going to try my hardest.”