Artist Marlon Davila’;s mural ‘Journey,’ at the corner of John Street and Leigh Avenue, features a tree with hundreds of monarch butterflies. 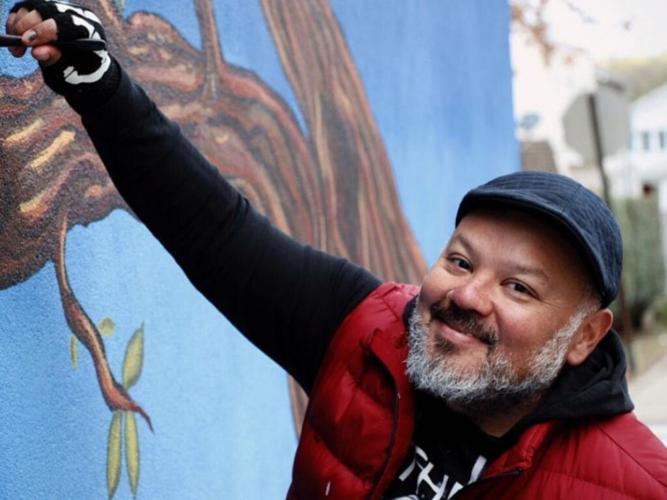 Artist Marlon Davila at work on his Princeton mural. 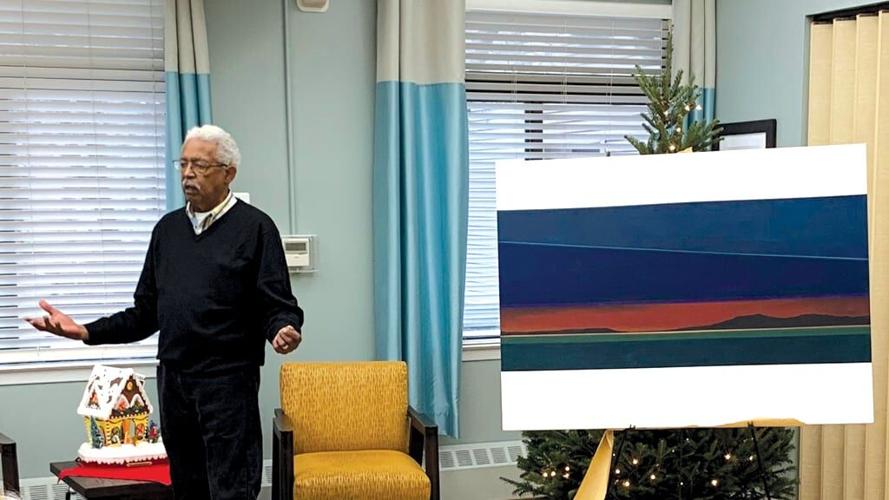 A simple idea. That was the starting point for “Journey,” the mural on the corner of John Street and Leigh Avenue. The painting features a magnificent tree adorned with hundreds of monarch butterflies as its branches reach skyward toward the big dipper and the north star.

“The monarch butterflies signify migration, and we are a country of migrants,” said the mural’s artist, Marlon Davila. “The butterflies look alike, but each one is unique. In that sense, they are like us. We each have our own story to tell.”

Davila speaks of the time and creativity he put into the mural — a project of the Arts Council of Princeton — as a way of giving back to the people from the Witherspoon-Jackson neighborhood where he grew up.

The Arts Council’s artistic director, Maria Evans, describes Davila as the perfect person to create the mural and receive the Anne Reeves Artist-in-Residence award. He had donated art to the organization’s annual Pinot to Picasso gala and had graduated from the “Artist as Teachers” program this past year. Evans has come to know Davila as a person with talent and compassion and a long-standing connection to the community.

In the process of obtaining the town’s approval for the mural’s location, ACP faced challenges from the Witherspoon-Jackson Neighborhood Association, which contended it should have been consulted earlier in the proposal process. Another mural project, illustrating the African American experience in Princeton, is in the planning stages and is slated to be installed at the Mary Moss Playground on John and Lytle streets.

Davila’s completed mural was unveiled in a dedication by Mayor Liz Lempert on Nov. 9.

“The wall was so inviting to me. It exists on the street where I grew up. In the process of painting the mural, I made new friends,” he says. He recounts that people driving by would pull over to watch him work, and people who were walking by would stop and talk with him. Sometimes a parent would come by with a kid who would ask if he could help, and Davila would let him paint a few strokes.

Davila’s work is influenced by nature, romanticism, and surrealism. Recurring themes in his work reflect spiritual seeking and the influence of the subconscious mind. He explores life journeys of individuals seen from both the long view and day-to-day living. He values all of life’s experiences including joy and pain.

“At a young age of seven, I had a firsthand experience with death when my baby brother passed away unexpectedly from a serious viral disease. He was only five days old,” Davila says. In one of his online portfolios, he writes: “This left me really traumatized and fearful of losing any more loved ones in my life.” But, he continues, over the past couple years he has come to realize that we are all eternal beings and that endings are not our destiny. “We just transition into different paths in our lives,” he says.

Davila decided to pursue a career in art about 10 years ago, but his journey there began before he was born. He was conceived after his biological father had kidnapped his young mother. Through the efforts of his grandmother, his mother was rescued, and her family helped her move from their hometown in Guatemala to Princeton, where she could live with an aunt.

Davila was born in 1974 at the old Princeton Medical Center on Witherspoon Street. He and his mom lived in Princeton for about one year before returning to Guatemala.

His mom fell in love and married the man who became Davila’s stepfather, but their happiness was short-lived. After discovering that Davila had been sexually abused by a step uncle, they moved back to Princeton when he was eight years old. His stepfather worked at Princeton University as a janitor and also worked part time as a mechanic.

After high school Davila took a job at a pharmacy and as a security guard. When he was 19 he discovered he had gay leanings and because of his religious upbringing feared that he would literally go to hell when he died. “For many years, I struggled with drinking,” he says, recalling “a dark time.”

One day, in a moment of introspection, he heard an inner voice that told him he was loved and there was nothing wrong with his sexual orientation. He describes that event as a spiritual experience that marked a turning point in his life, renewed his sense of self-worth, and inspired him to pursue a creative career.

He moved to Florida, where he studied fashion design at the Art Institute of Fort Lauderdale and later worked at the Boca Raton Resort Hotel in the party and events department setting up props, lighting, and bonfires.

He had no intention of moving back to New Jersey until he received a call from a family member informing him that his mother was very sick. He moved back in 2005 and landed a job at Princeton University as a library special collections assistant.

He also enrolled at Mercer County Community College to study graphic design. “I knew nothing about painting then,” he says. “But my teacher saw something in me and encouraged me to take a painting class.”

Davila enrolled in a course, discovered that he loved painting, and switched his major to fine arts. He graduated with honors and was awarded the Jack Harris Memorial Scholarship. He further honed his love of painting by attending “Art Escape Italy,” a workshop held in the province of Lucca and led by Norwegian oil painter Henrik Uldalen.

Davila continued working at the university while painting in his free time. In February his work was shown in an exhibit sponsored by the university’s Center for Collaborative History. Based on the exhibit theme, “From Within,” Davila entered a self-portrait, a likeness of his face surrounded by images, among them, a tiger, a Buddha figure, the number 1111, and a skull.

“I believe in the power of symbols,” he says. “Tiger is my spirit animal. A tiger roams on its own. It moves to the beat of his own drum. I’ve never been persuaded to do what everyone else does.” The number 1111 reflects the frequency with which the number appeared to him on clocks or other devices during that period of his life. The Buddha represents his meditation practice, and the skull is a reminder that we don’t live in this form forever but for a limited time.

When he was invited to paint the mural, the timing was right. He describes the theme and title, “Journey,” as a cohesive conclusion based on conversations with students from the Clay Street-based Pannell Center’s Princeton Young Achievers class and members of the Art Council.

As an artist, Davila’s signature is 7ove Child. “Early on in my career, I needed to do something to get out of my box and let go of any inhibitions,” he says. “I wanted to be fearless and carefree about creating a masterpiece. I am literally a love child, and thought, ‘Why not use that name and turn around the stigma?’ When I go into the studio, I become 7ove Child. I am set free from my inhibitions.”

Today Davila works as a full-time artist and teaches art at the Paul Robeson Center. “I love how children have a natural ability to create something without questioning themselves. I was inspired as a kid, and so I love to inspire others,” he says.

He currently lives with his partner, Rich Friedman, in Edison. His mother still lives in Princeton in the apartment complex on the site of the former Princeton Hospital where Davila was born.

Despite the traumas he experienced while growing up, Davila says that now, as an adult, he believes that he was protected as a child.

“The important thing is that you can turn a tragedy around if you listen to your inner voice and love yourself,” he says. “Everyone has a story. If I can be of help to anyone, I have made my day. With all the bad things in the world, we need to spread love.” And the mural on the corner of John Street and Leigh Avenue does just that.

Another artist with deep connections to the Witherspoon-Jackson neighborhood,

, is also leaving his mark on the community through his work. In honor of his retirement from the board of Princeton Community Housing, Colbert presented his painting, “Borealis,” to senior affordable housing communities Elm Court and Harriet Bryan House on December 13.

Colbert, who will remain involved as an emeritus trustee, served as a representative to the board from the Witherspoon Street Presbyterian Church for more than 10 years.