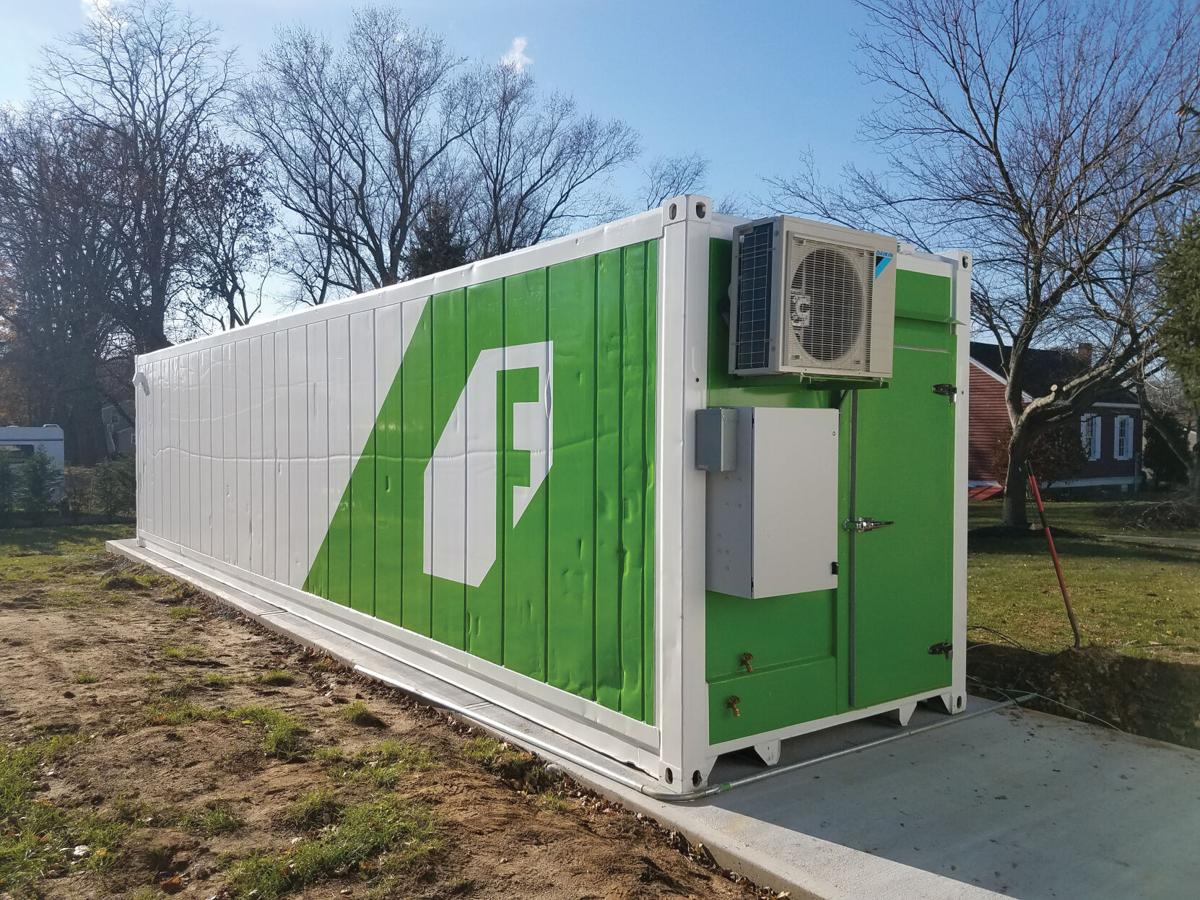 The township’s Leafy Green Machine—a hydroponic farm in a repurposed shipping container—sits outside the senior center. 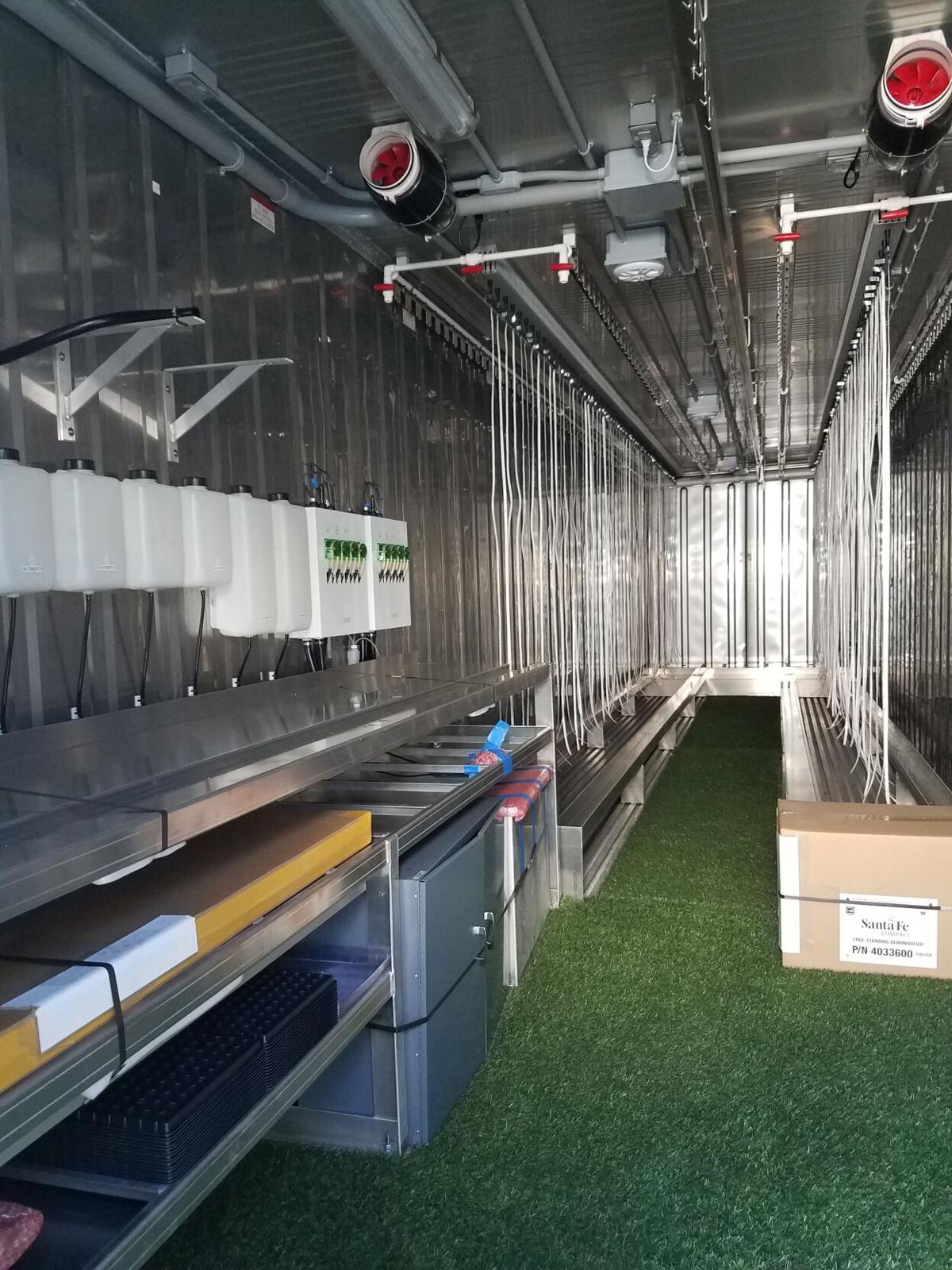 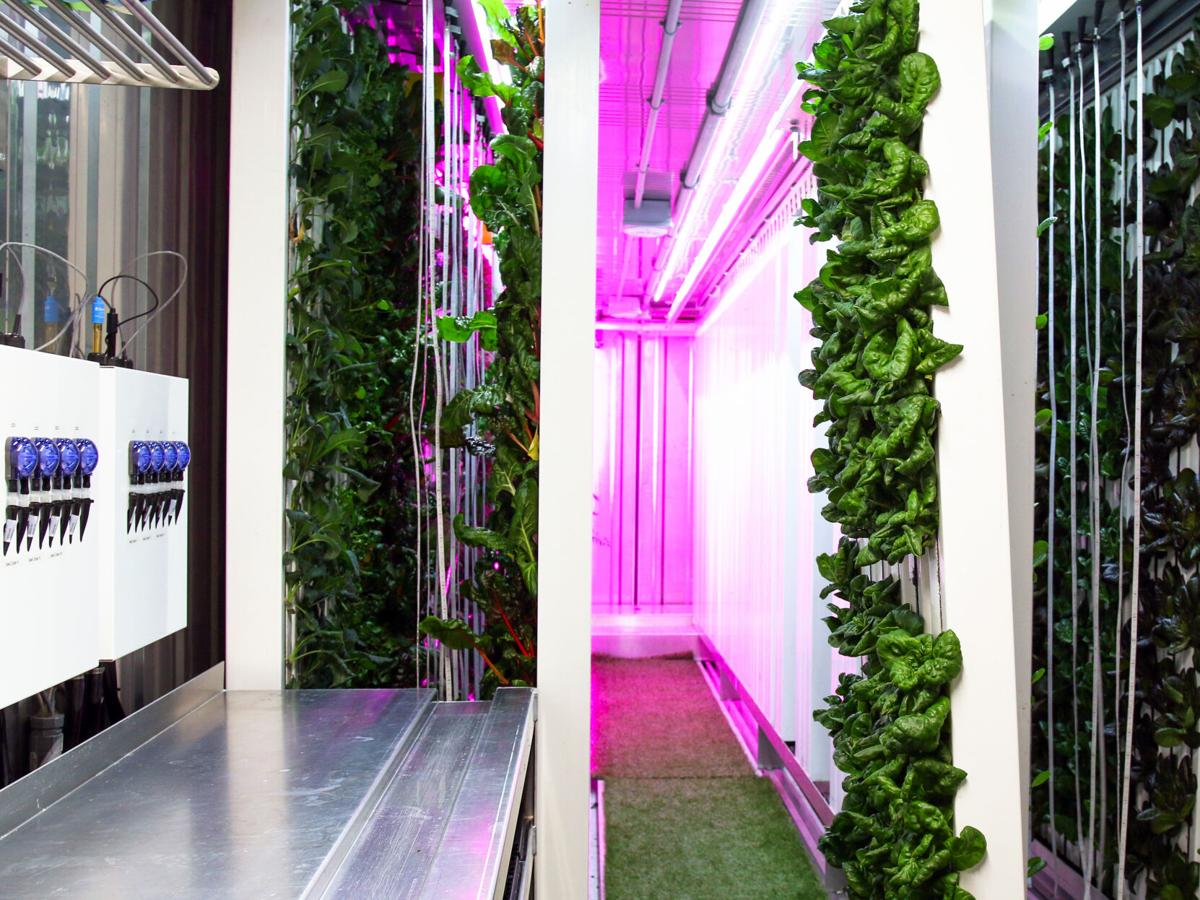 Nestled at the municipal complex just yards away from the Little Red Schoolhouse—an icon of Robbinsville’s past—rests a repurposed shipping container officials say is a symbol of the township’s future.

This 40-foot white metal container is a Leafy Green Machine, described by manufacturer Freight Farms as “a farm in a box.” One 320-square-foot container can produce two to four tons of food every year. Farmers can churn out one yield per week in the Leafy Green Machine, with produce going from seed to a plant on your plate in eight weeks or fewer.

It does this using hydroponics, which simply is the science of growing plants without soil.

With hydroponics, growers use solutions with necessary minerals in place of soil. Roots can either be bare or placed in supportive inert materials, like starter cubes. Hydroponics allows plants to grow year round, indoors using artificial light. Proponents say hydroponics allows for healthier plants and better, more consistent yields. Hydroponic gardeners use the same seeds as a conventional outdoor gardener, but many clone grown plants to skip much of the growing process and save time.

Some cities have ventured into hydroponics, but Robbinsville is the first municipal government in the world to acquire a Leafy Green Machine. Robbinsville Mayor Dave Fried said hydroponics has intrigued him for awhile, and views it as a way to solve food insecurity as farmland disappears and human population increases.

Freight Farms’ product impressed Fried so much upon first viewing it two years ago he tasked the municipal recreation department with bringing one to Robbinsville. The township government completed the purchase in 2017 for $104,000, which included delivery, shipping and set-up costs. It arrived in town Nov. 28, put into place next to the township senior center. Now, the hard work begins—turning a shipping container into a productive farm and a community hub.

Growing started immediately, with township officials hoping to have first yield in February. Initially, the container will be only at one-quarter to one-third of its capacity, with greens like lettuce, kale, Swiss chard, basil, oregano and cilantro growing. By summer, Robbinsville’s hydroponic farm will be closer to full production, as well as—the township hopes—certified as fully organic.

In the Leafy Green Machine, the rows of plants are lined up vertically, a 90-degree rotation from typical farming. They are fed via LED lights and nutrient-rich solutions. It uses 90 percent less water than conventional farming, and no pesticides or herbicides.

Yields will come as often as once per week, with the farm providing fresh greens for senior nutrition program, Meals on Wheels and food pantry clients. It will be used daily for the seniors and Meals on Wheels, and twice a week at the food pantry.

Plans are in the works for other partnerships and programs, some of which would generate money for the township. The township has researched the potential for a CSA program run from the hydroponic farm, as well as coupling with nonprofits to provide low-price veggies and help feed those in need. Fried said although the container would not compete with area farms and farmers’ markets, the township still expects the farm to pay for itself in five years. It has a lifespan of 20 years.

But township officials view the shipping container as much more than a food producer. So high are hopes that the township has hired Kyle Clement, a recent Rutgers University plant science graduate and past state president of the New Jersey FFA Organization, to serve as hydroponic farm coordinator. Clement started in the recreation department part-time in October, and moves to full-time in January. He estimated he initially will spend as much as 30 hours a week getting the farm up and running.

Some of that labor would be of a traditional farmer. But Clement and Kevin Holt, municipal recreation activities coordinator and community relations specialist, have worked just as hard to explore all the possibilities for the farm as a community feature. This part actually may be the most challenging since there’s no blueprint to follow. Robbinsville’s the first.

The township’s two main focuses for the farm’s recreational angle currently are students and senior citizens. It presented the plan for a hydroponic farm to seniors at the senior center prior to purchasing the Leafy Green Machine, and interest was so high, the township nixed a plan to locate the container at the municipal building, instead putting it at the senior center. It also envisions partnerships with the school district for class trips and other student opportunities. Fried said the high school’s robotics club has expressed interest in exploring the technology within the Leafy Green Machine. The schools’ gardening clubs also seem a natural fit.

“There are just as many kids who don’t play sports,” Fried said. “When’s the last time we did something for the robotics kids or the kids who are interested in farming? And then for the kids to be able to share the experience with the seniors, how cool is that?”

There’s also a potential for broader community classes, as well as other grant-funded programming. Right now, the future is a blank slate.

Because of this wide-open frontier, the township has set out to develop a replicable, easily sustainable program that other municipalities can copy. Fried said he believes governments will get more involved with hydroponics as its potential comes out as a recreational program, a revenue producer and a consistent source of food. It’s the rare government initiative that can be all three.

“There is a really good end user,” he said. “We can paint things and make pottery, but this will have a really good benefit at the end.”

Newark Beth Israel built the Beth Greenhouse a year-and-a-half ago across the street from the hospital. As its name suggests, the Beth Greenhouse is a greenhouse that uses hydroponics to grow fruits and vegetables. The walls are translucent, unlike Robbinsville’s container. In one small building in Newark, the greenhouse yields the same as a 5-acre farm.

The hospital, of course, uses some of what’s grown at the greenhouse, but it has been used mostly to solve food access issues in Newark. The Beth Greenhouse now can take SNAP benefits (food stamps), and sells its produce at a farmers’ market at the hospital every Thursday. The surplus is donated to local food pantries, church groups and the hospital’s cancer patients.

The hospital also has used the Beth Greenhouse for community education, running classes with registered dietitians to teach people in the city what to do with the produce, how to cook healthy and what to look for while grocery shopping. It has also offered kids’ cooking classes, so area students have a foundation in healthy eating.

Fallon suggested Robbinsville partner with local organizations or hospitals to do something similar, saying looping education and community involvement into the farm has been vital to the Beth Greenhouse’s success. It has connected people with the greenhouse and the food that grows there. Those people—many of them immigrants with agricultural backgrounds—have become the biggest champions of the farm.

“It’s something they related to,” Fallon said. “When we first opened, everyone wanted to see what this thing was. People will walk in and share their feelings on what we’re doing.”

In fact, the Beth Greenhouse has adjusted to better reflect its community, growing what Fallon called “culturally relevant plants.” They are items grown in Africa, South America and Asia that are not found in American markets. It has given community members a place to find those items, and a stake in the greenhouse itself.

There also has been buy-in from hospital staff, many of whom will volunteer during their lunch breaks. While a conventional farm would require a change of clothes and a substantial amount of time, the hydroponic greenhouse allows people in professional attire with only a few minutes to spare the opportunity to help.

“Here we can have people in work clothes come over and volunteer,” Fallon said. “It’s not as intimidating.”

“This is going to be so much more than lettuce,” Clement said. “I see the opportunities that can come out of this.”