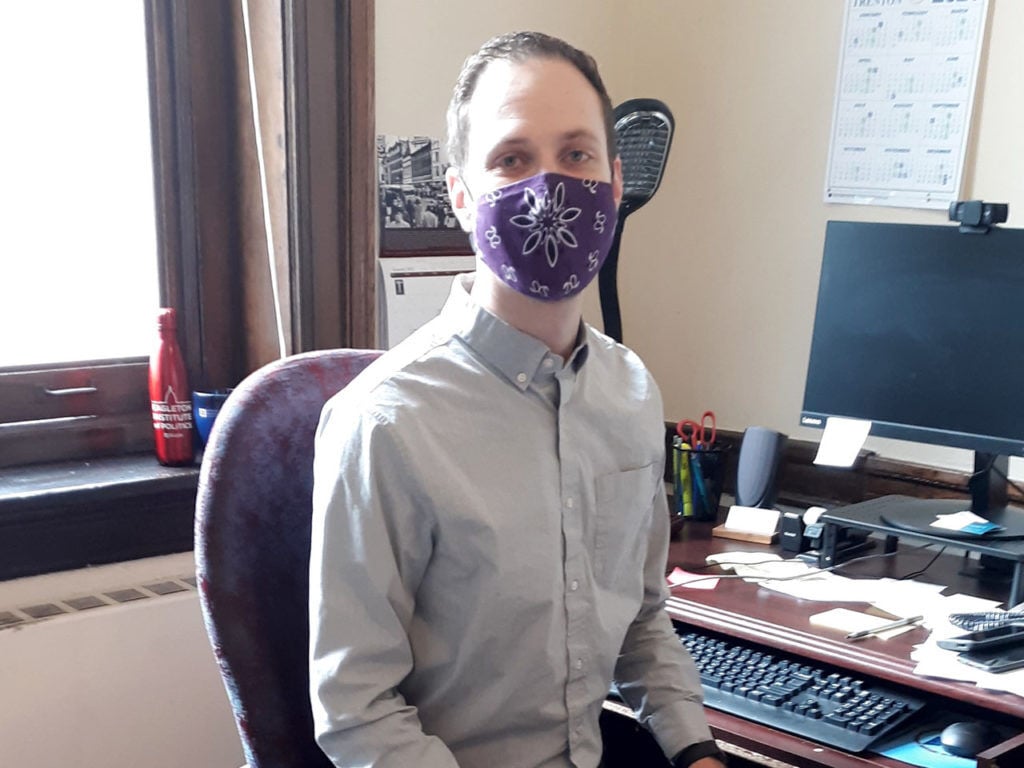 Rick Kavin in his Trenton office. 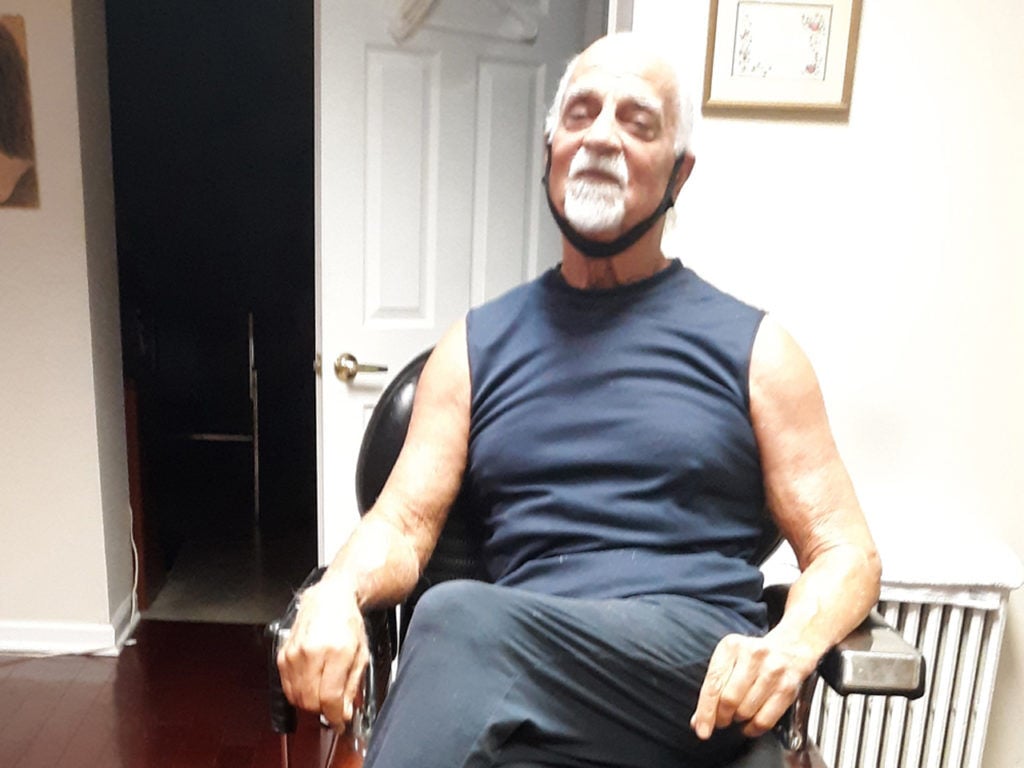 Rick Kavin in his Trenton office.

Rick Kavin sits at his desk in his second floor office of Trenton City Hall and readies to talk about his small place in city history — Trenton’s first LGBTQ Liaison.

“(The position) was created in June,” says Kavin, who voluntarily bundles the non-budgeted liaison duties into his $65,000-per-year full-time job as an aide to Trenton Mayor Reed Gusciora.

Kavin says over the past several months he has been collecting resources to support the city’s LGBTQ community members — many of whom experience general urban problems related to homelessness and addiction but with additional problems related to bias and bullying.

Although Trenton has no hard statistics regarding the city’s LGBTQ population, partially because current census reporting excludes information on sexual orientation, Kavin says the city is using a working formula that estimates between 7 to 12 percent of any given area of citizenship can be classified as LGBTQ.

He also says gathering data is sometimes complicated by other social factors. “In some areas people are open about their orientation, but people of color may not be as open.”

Part of the reason is that some community members are in social environments that makes them tentative about being openly gay. Additionally LGBTQ youths who “come out” are sometimes disowned by their families, become homeless, and need support services.

Continuing on the topic of Trenton’s younger LGBTQ community, Kavin says, “I’ve been surprised by how many students have reached out to me about problems at home. Right now, during COVID, there are very few recreational activities. Safe havens for students were taken away. Staying at home in an unsupportive and violent environment has been a challenge.”

Although New Jersey is a “good place” for LGBTQ people in general, he says there needs to be more support for homeless LGBTQ youth.

According to Kavin, the project’s growing network of support includes the Trenton Rescue Mission, City of Trenton Health Department, and the Trenton Free Public Library, which he calls “one of the most helpful resources. I’m the mayor’s liaison with them. We have been putting together community conversations that deal with the LGBT population and HIV and created a social justice corner that includes materials. We’re also talking about HIV testing and community programs. This would be down the road after COVID.”

Kavin says his involvement as a board member of the Highland Park-based Pride Center of New Jersey, an all-volunteer nonprofit self-described as “dedicated to the health and well-being of all individuals in the LGBTQ community,” and as a political science graduate student and instructor of LGBTQ rights at Rutgers University in New Brunswick, provided the proper foundation for his community liaison duties.

An Eagleton Institute of Rutgers work scholarship brought him to Trenton in the summer of 2019. “I came in the summer and then started as a full-time employee. It was a great fit.”

He says he also attended Boston University, where he pursued a double major in psychology and anthropology and spent time teaching English in South Korea and then Honduras.

“I ended up coming back to New Jersey and did my master’s in political science at Rutgers in Newark and decided to keep going to pursue my Ph.D. (in New Brunswick).

“My mom just retired as a special education teacher. My dad passed away when I was 15. My stepdad ran a sandwich shop in New Brunswick, Jersey Subs, right on George Street He’s happily retired, but (the shop) is still going, even during COVID. I worked there in my college years on breaks and even while doing my master’s. It was a great part-time job.”

Kavin says his interest in political science was sparked when he was teaching abroad and saw “how different programs and initiatives worked in different places. In South Korea schools are very regimented. Students work hard and parents oversee them. In Honduras, it is different. I was looking at where those policies came from and worked.

“There were also elections that took place. I saw that they were so different and asked what the U.S. could learn from them.”

His interest in LGBTQ support came from “existing very publicly as an out person — as I do in all my roles. I’m just a person coming to work, but I am publicly defined by who I am.”

He says one of the biggest challenges of his City of Trenton job was making the transition from “academia to on-the-ground politics — serving a municipal government. It has been learning experience. Coming from a theoretical environment and studying and then dealing with on-the-ground realities is different than discussing and writing about them as a removed person. At the same time it gives me a pretty unique perspective, and I come in with some theoretical knowledge of what worked in other places and situations in other locations. I have been lucky here to be guided by people who have been successful in their fields and having those perspectives has been helpful to move the city forward.”

To create the Trenton LGBTQ liaison office model, Kavin says he has taken ideas “from other municipalities in New Jersey and other places. I have talked to people in Newark and Asbury Park. A colleague of mine has had a similar role in Massachusetts. And she’s been helpful regarding challenges and programs. She has been a great resource to develop a template for Trenton.”

Asked about how an office dealing with sexuality and gender fits into a larger picture of need, Kavin says while most people talk about racism, sexism, and ageism, they do not understand that sexual orientation is also protected by the Civil Rights Act of 1964, something reinforced in by the June 2020 Supreme Court Case Bostov v. Clayton County.

“This is the most important case for LBGT since the marriage equality case. This opens the door for future cases, such as health care. I think you’re going to see more cases coming before the courts,” he says.

Kavin adds that part of the decision to create the position is because grants are available. “Some of them are smaller grants and directed towards initiatives. Because the program exists, we can apply for that kind of money.”

And since grant funds are dedicated to one project, it doesn’t compete with other funding needs. “As we have seen, some of the problems overlap,” he says.

Kavin says some assistance is also coming from Trenton clergy members who have “reached out to me to explain what services they offered, shelters and safe places for youth. Even though there can be tension between religion and sexual orientations, the churches here have been active in addressing problems.”

And while one Trenton city council member recently made national news for making biased remarks against Trenton’s openly gay mayor, Kavin says, “We want to create an environment of inclusion. Any person using a type of speech like that should be held accountable. City hall has been supportive. Trenton is a more welcoming community than people will give credit for.”