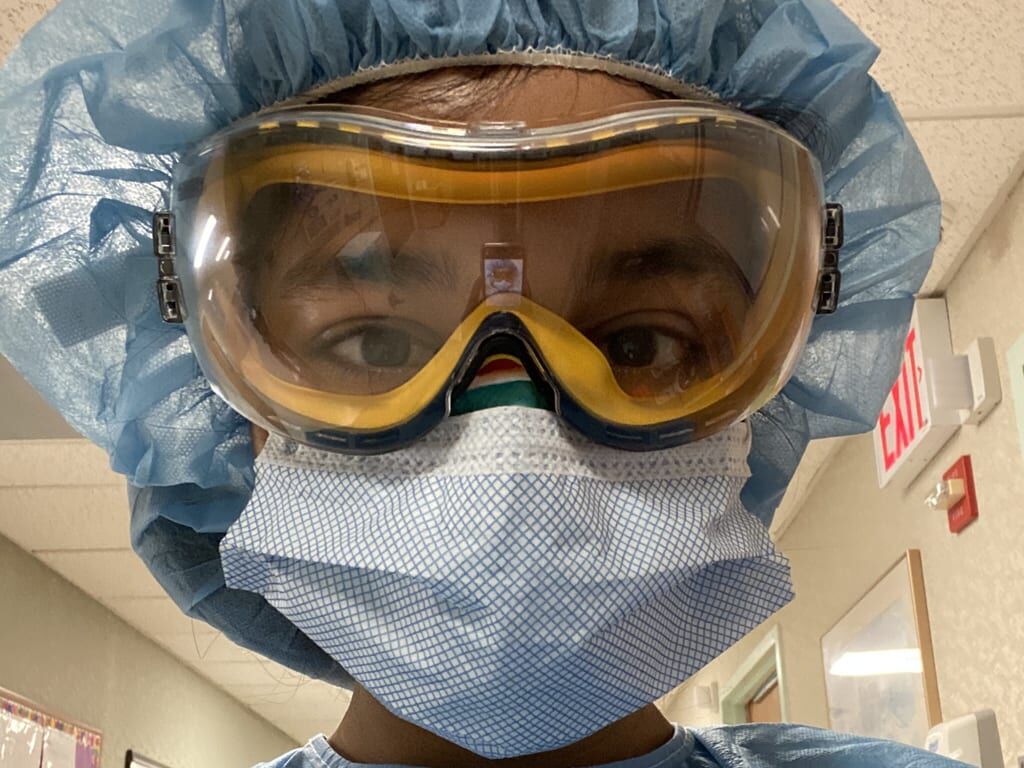 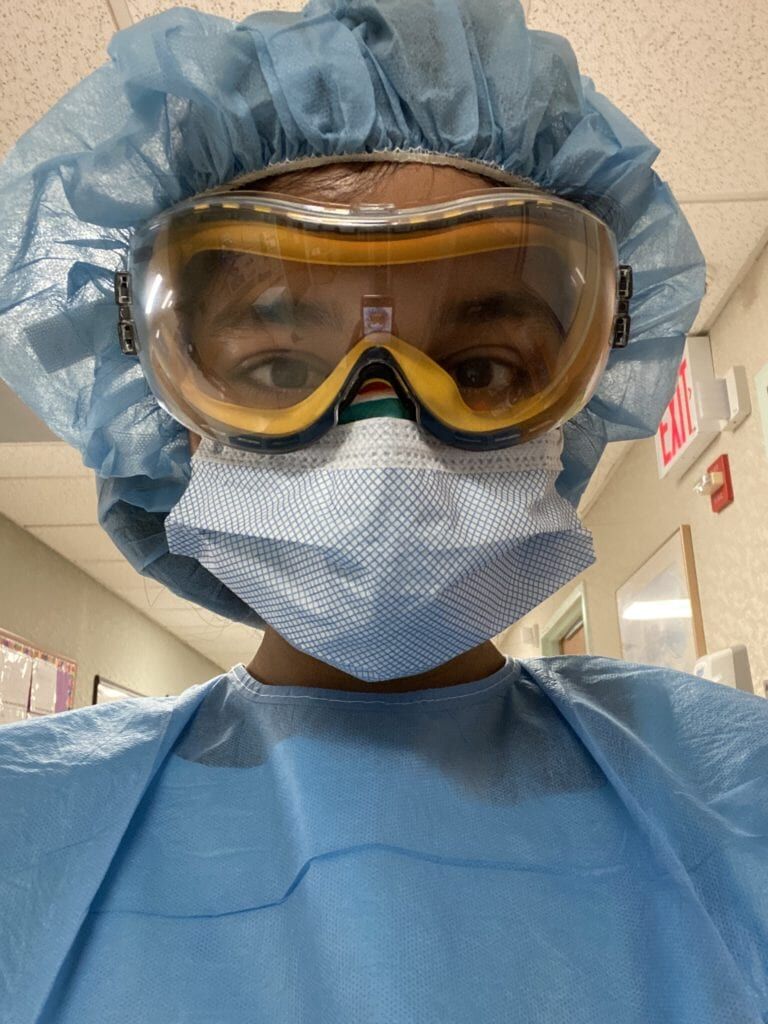 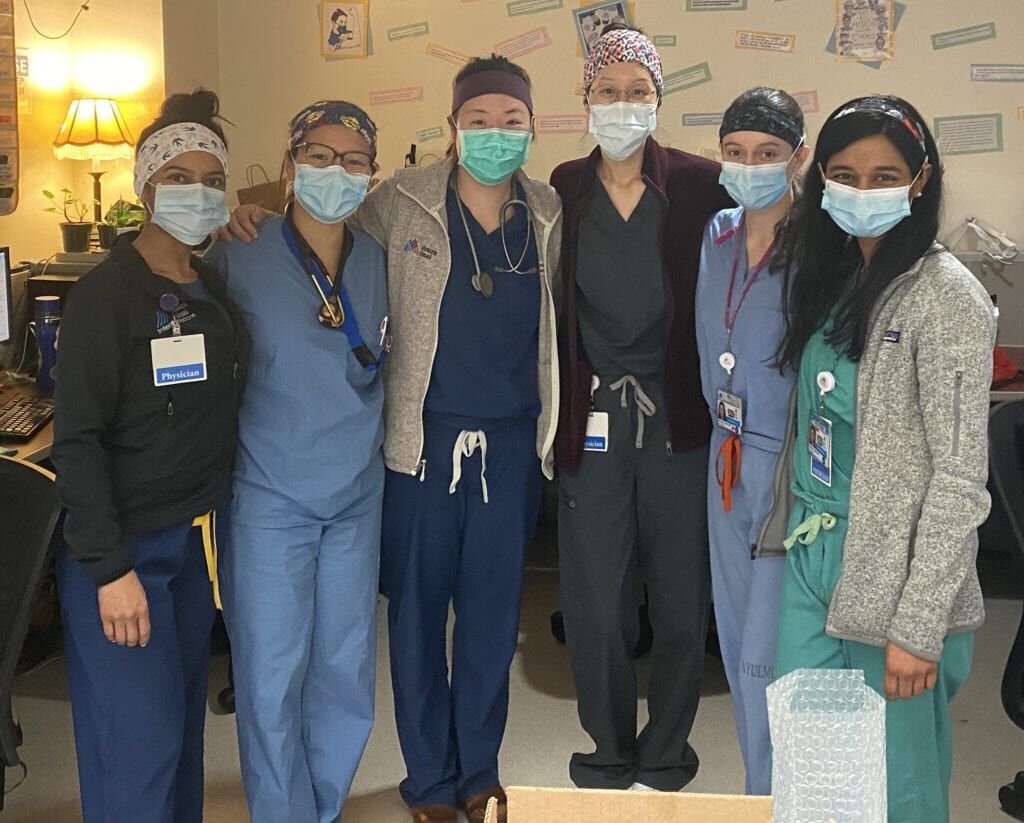 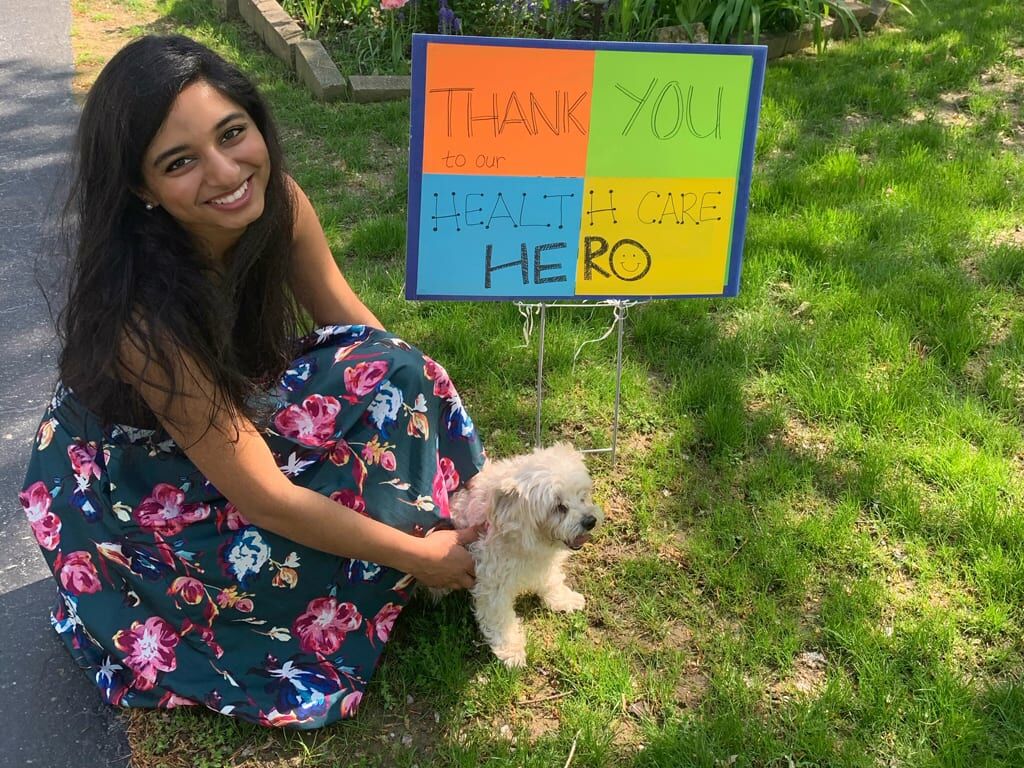 Dr. Shaik in front of her family’s Plainsboro home with a lawn sign expressing appreciation for her work with coronavirus patients.

I had treated Ms. D back in November for a COPD flare. She was a sweet, elderly woman who loved showing me pictures of her grandchildren.

When I saw her on my list of patients to admit in March, a sense of dread grew in my stomach knowing that she was most likely here with COVID-19, as were nearly all the other patients in the hospital at that time, and that she was a high-risk patient given her lung disease.

As I walked down to the emergency department, I tried to focus on how nice it would be to catch up with her and hear which new words her granddaughter had learned. Before going into her room, I carefully put on my N95 mask and face shield, knowing that they would have to last me the rest of the shift. As I was tying my gown, my phone rang. It was the senior resident.

Standing there in shock, one gloved hand clutching the phone tightly, I had to ask her to repeat herself three times to make sure I had heard correctly.

“She seemed stable. They were getting ready to put in another IV when they noticed that her pulse had suddenly stopped.”

That was it. Per her wishes, she had not received CPR. I was standing just around the corner from her room. In a daze, I walked to her bed. The ED team had already started writing her death note. I held her hand and whispered, “I’m so sorry.”

The worst part is calling the family afterwards. To reduce the spread of coronavirus, the hospital instated a “no visitors” policy.

While certainly necessary, it also often means that patients can’t spend their last few minutes with their loved ones and that families don’t get a chance to say goodbye. Breaking that news over the phone and listening to the grief on the other side is heart wrenching. And it never gets easier.

“But she just got there!” Ms. D’s daughter exclaimed in disbelief. I didn’t know what to say. I didn’t even know how her mother had died. Was it a blood clot to her brain? Did her heart just give out? Did her lungs get too tired?

Even six months since the first COVID-19 case was discovered in China, we still have more questions than we do answers. We do not definitively know the ultimate cause of death in many of these patients and we are still guessing at how to treat them.

Hydroxychloroquine, high dose steroids, blood thinners, Remdesivir, famotidine: there is no conclusive evidence that any of these actually work, but we throw the kitchen sink at sick patients because what other choice do we have? As a member of a profession that prides itself on evidence-based practice, COVID-19 makes us exceedingly uncomfortable.

Adding to the unease is watching the increasing politicization of a public health emergency. The wall-to-wall news coverage often revolves around what controversial statement the president has made, and the subsequent partisan responses rather than focusing on vetted facts and science.

Instead of having political leaders dominate the press coverage, physicians and public health professionals should have the most public facing voices. While perceptions of politicians and news media outlets vary drastically along partisan lines, this is not the case with doctors, who are considered trustworthy by members of both parties.

With health professionals leading messaging, there would have been less misinformation and an early emphasis on changing behaviors to prevent further spread of COVID-19.

The impacts of misinformation and partisan beliefs are apparent in the recent protests against stay at home orders and the spread of the “Plandemic” video, as doubts circulate that the threat of the virus has been blown out of proportion.

For someone who has been staying home and doesn’t have a loved one affected by COVID-19, it can be difficult to understand how dangerous and pervasive this disease has been. The threat of this virus cannot be overstated for those of us who have worked in the epicenter of this epidemic.

We have watched helplessly as young patients suddenly die despite every treatment we have tried. We have lasting scars from N95 masks and have not seen our families in months out of fear of infecting them.

The fact that we are seeing fewer cases now than initially predicted and have not required as many ventilators as expected is not a reflection of an exaggerated threat, but a sign that we took it seriously enough—eventually—to make some life-saving changes, like social distancing measures and stay at home orders, though there is still room for further action.

It will certainly take time to recover from the economic hardships and heal from the grief caused by this pandemic, but I hope that one thing will last: the humanity we’ve seen in each other and the sense of community that has blossomed.

I’ve seen it in the young people who volunteer to buy groceries for their at-risk elderly neighbors. I’ve seen it in the healthcare workers who enlisted to come out of retirement to help out at hospitals in hard-hit New York City. I’ve seen it at 7 p.m. every night for the past couple months as cheers erupt from windows and rooftops across the city of New York for the essential workers putting their lives at risk everyday to help care for and protect their fellow New Yorkers.

I’ve seen it in Plainsboro, my hometown. When my family heard that we were running out of personal protective equipment at my hospital, they asked around for donations and were able to collect nearly 700 surgical and N95 masks from Plainsboro residents, many of whom didn’t even know who I was. (A special shout out to the WWP Chinese community for coming together to send more than 500 of those.)

When I went home to visit my family for the first time in three months (after completing my self-quarantine), I was surprised with a car parade by the residents of my neighborhood. Nearly 50 families drove by our house holding up homemade signs of gratitude and yelling wonderful messages of support through their car windows. I had never even met many of them before.

As I write this, it has been 73 long, exhausting, terrifying days since the first patient in New York City—and the tristate area—was diagnosed with COVID-19.

So much has changed since then; we had no idea what was ahead of us. As the light at the end of this seemingly interminable tunnel shines a little brighter, we must never forget what is behind us and use what we have learned to overcome the inevitable future waves. Because while this battle may soon be ending, the war against COVID-19 is just beginning.

Aleesha Shaik, MD, MPH is an internal medicine resident physician at Mount Sinai Hospital in New York City. The WW-P High School North graduate holds an MD degree from Drexel University. She received her Master of Public Health from Harvard University and a Bachelor of Science in Molecular and Cellular Biology from Johns Hopkins University.