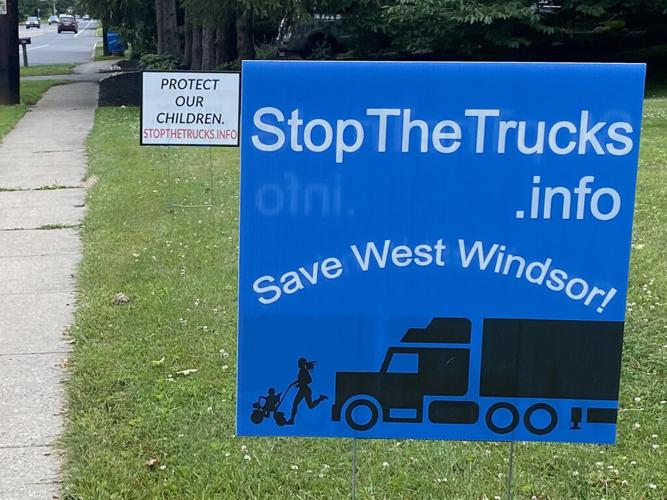 Signs line Clarksville Road in West Windsor in opposition to a proposed 5.5 million-square-foot warehouse distribution center at the corner of Route 1 and Quakerbridge Road. Clarksville Road runs through the center of the property, and residents fear the impact of truck traffic on area roads. (Staff photo by Bill Sanservino.) 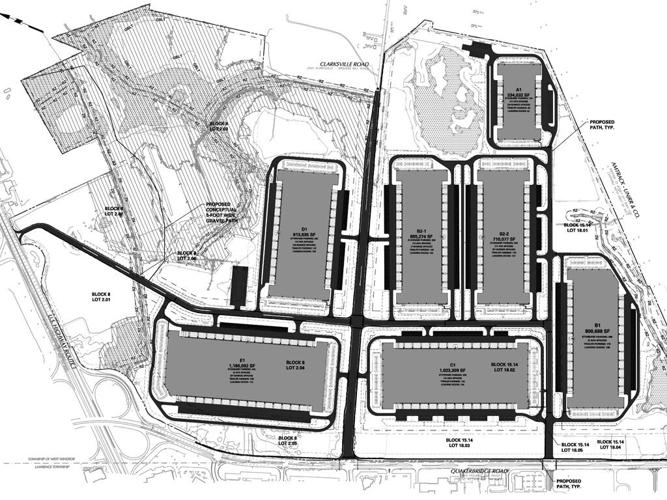 The Bridge Point 8 project calls for seven warehouses totaling more than 5.5 million square feet to be built on the on the 653-acre former American Cyanamid site. The property is located at the corner of Quakerbridge Road (bottom) and Route 1 (left).

The West Windsor Planning Board on Wednesday, June 29, is expected to deliberate and potentially vote on a plan for a mammoth 5.5-million-square-foot warehouse development on the old 653-acre American Cyanamid tract.

The project, called the Bridge Point 8 Industrial Park, calls for the construction of seven warehouses on the tract, which is located at the corner of Route 1 and Quakerbridge Road.

The site is one of the largest contiguous undeveloped properties on the East Coast and has been called the “crown jewel” of undeveloped tracts in the state.

The developer, Bridge Point WW LLC, is proposing that the complex be built in two phases.

It also calls for the construction of a new road through the site that would run from the intersection of Quakerbridge Road and Avalon Way to Route 1 across from Nassau Park Boulevard.

The second phase calls for the construction of four warehouse buildings totaling over 2.5 million square feet.

Also proposed for the site, but not part of the current application, is an additional 150,000 square feet of retail space, 192,000 square feet of office space, a 16-pump gas station with a convenience market, and two hotels providing 230 rooms.

Numerous township residents opposing the plan have attended the four meetings in May and June during which the board has considered the application.

The residents’ concerns include the impact of trucks generated by the development on area roads, including Route 571 and Clarksville and Quakerbridge roads, and the pollution caused by the additional traffic. Opponents have started an online petition calling on the board to reject the project at sign.moveon.org/petitions/stop-bridge-point-8. As of June 24, it has 2,241 signatures.

To help address some of these concerns, one of the planning board’s proposed conditions would prohibit trucks from turning northeast on Clarksville Road (towards the center of town and Route 571).

Planning Board traffic consultant Jeffrey L’amoreaux said at the Board’s June 1 meeting that the intersection of Clarksville and Quakerbridge roads currently operates at an “F” level (failing on a scale of “A” through “F”) of service, and that even after widening and improvements under the plan, functionality would only improve to “D” or maybe “C” at times.

He also said he anticipates that truck traffic will impact the intersection of Clarksville Road and Route 571, but that intersection was not looked at in the plan’s traffic study—likely due to its distance from the project site.

In a further breakdown of those numbers, the traffic study estimates 60 trucks during the morning peak and 90 trucks in the evening resulting from Phase I.

The estimate for Phase II is 51 trucks in the morning peak hour and 77 during the evening peak. The numbers reported are not an estimate of the overall impact on area roads, since trucks will be coming and going from the site at all hours of the day, although peak traffic hours will be when the traffic has its highest impact on the performance of intersections.

Chicago-based Bridge Development Partners, the parent company of Bridge Point WW LLC, is focused on the development and acquisition of industrial properties in the United States and United Kingdom. Bridge is leasing the site from Atlantic Realty, which purchased the property from the Howard Hughes Corporation in 2019 for $40 million.

In 2020, the township reached a settlement agreement with Atlantic Realty to resolve pending litigation that had been filed by Howard Hughes.

The corporation challenged the zoning of the property, and the developer was pushing a plan to build a mixed-use project, featuring retail businesses, commercial offices and up to 2,000 residential units. Township residents and officials had long been opposed to building residences on the property, due to the impact they would have on municipal services and schools.