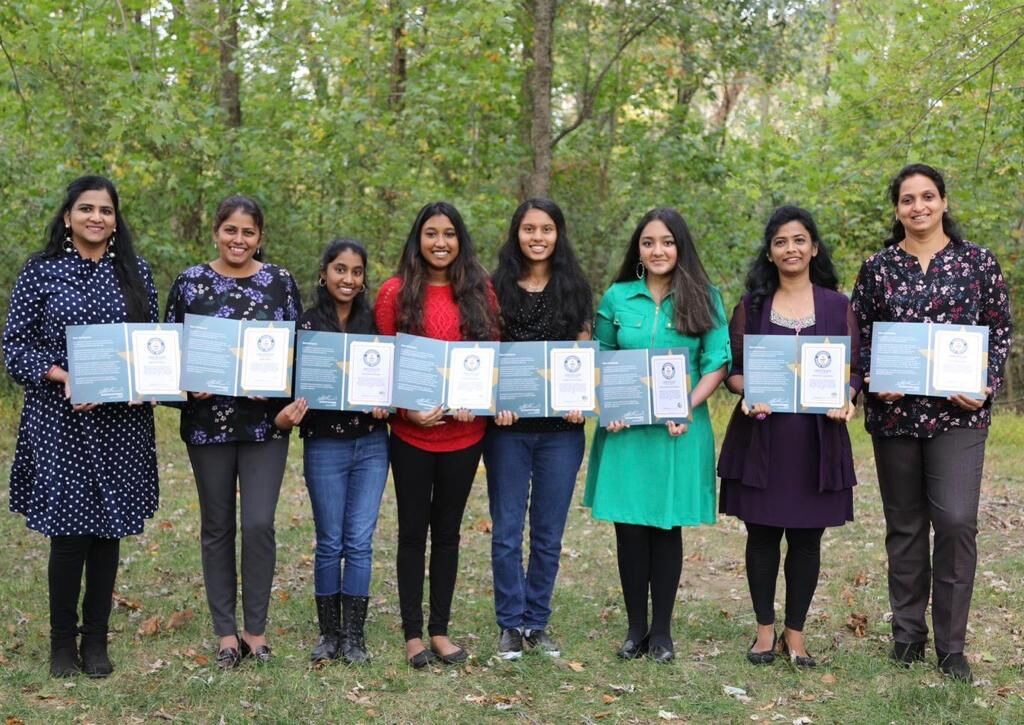 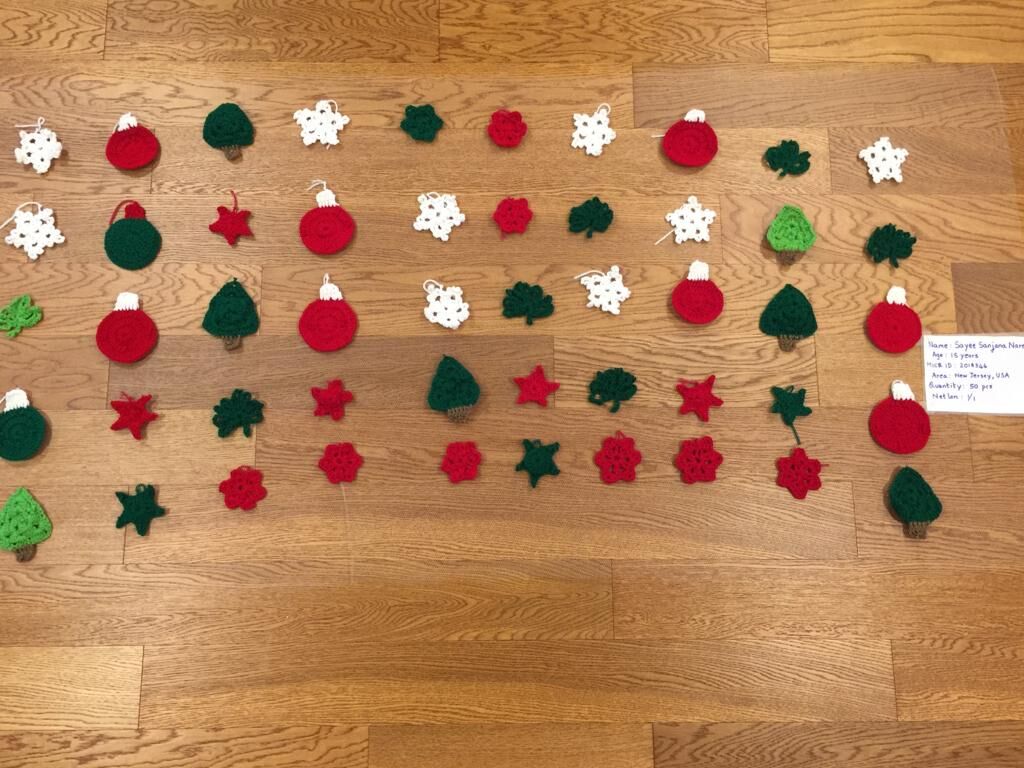 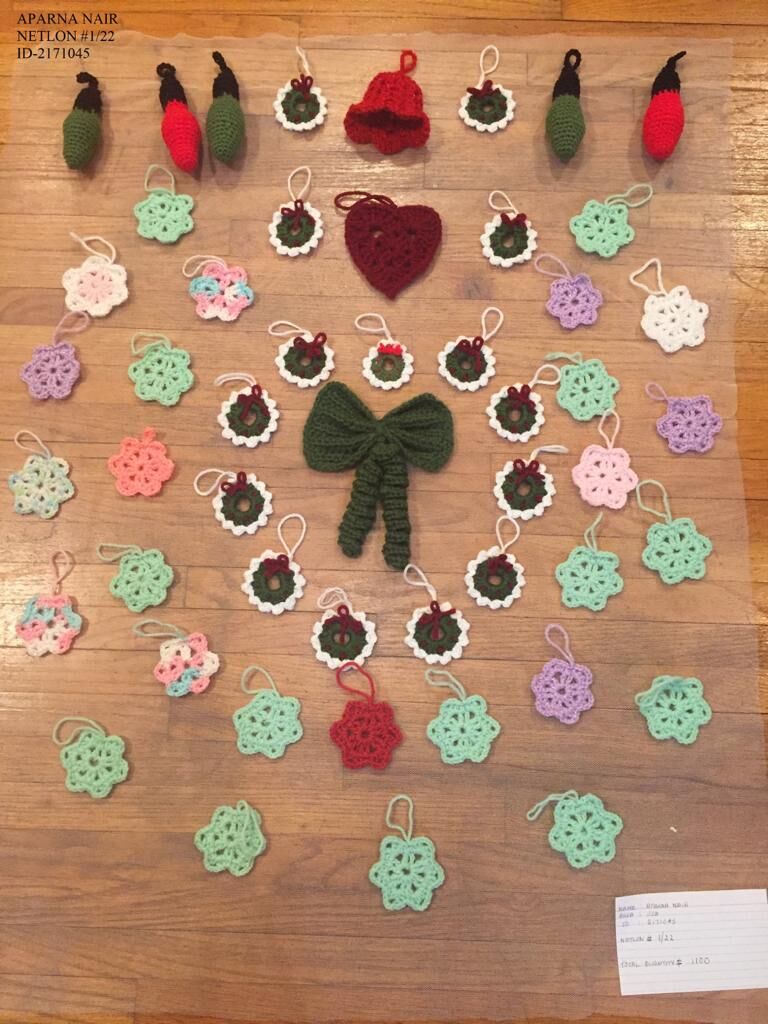 What started as a new hobby turned into part of a Guinness World Record for 10 Plainsboro women.

“It’s like writing your name in history,” Balakrishnan said.

The women were among a group of 350. They crafted snowmen, Santa Claus bobbleheads, nativity figures, snowflakes, Christmas trees, bells, stars and shamrocks. All 66,000 ornaments were collected and displayed in Chennai, India, where they will be converted into blankets, cushion covers, mobile cases and sling bags for orphanages, churches and other charitable organizations. Surendran was able to travel to India last year to present the Plainsboro group’s contributions.

Surendran was introduced to the Mother India Crochet Queens through her sister-in-law, who was already a member.

The group was founded in 2016 and has over 6,000 members across 13 countries. It focuses on charitable activities, like distributing scarves, crocheted toys, knitted cotton and silk caps and crocheted cowls and caps to those in need and other organizations. The Mother India Crochet Queens have previously set records for the largest crocheted blanket, largest crocheted scarf and largest display of crocheted sculptures.

Surendran’s sister-in-law told her about the record attempt last year, and she decided to join. There was just one small loose end to be tied up—Surendran had never crocheted before.

So she reached out to Balakrishnan, who was an experienced needle crafter.

“I was totally new,” Surendran said. “Priya taught me how to crochet, and she helped me with all of the different designs.”

Surendran then recruited some of her friends, as well as her daughter, Kumar, and her classmates.

“They really wanted to do this, too,”she said. “We started meeting on weekends. I just learned from Priya, and then all of sudden I was teaching these kids. But we were able to complete our target by June of last year.”

The women set a goal of 100 decorations from each individual—most of whom were first-time crocheters. Nair was the largest contributor—she finished 1,000 baubles in a five-month period. She’s been crocheting for over a decade, and Balakrishnan said she was a massive help.

“Apart from the designs, we also did pieces of nativity scenes,” she said. “Someone might do Jesus in the cradle, the mother, the father, shepherds. Aparna did one complete nativity scene on her own. She’s terrific. Generally, a baby blanket is 36 inches. For me, that’s three to four days of work. She can do that in a day.”

Many of the participants were new to needle crafting, though, and there was a bit of learning curve at first. But they all supported each other throughout the process.

“I hadn’t learned how to crochet before,” Sivakumar said. “It was fun to do something new, learning every weekend with Miss Menaka. I would try to finish as many ornaments as I could that day. It was such a great opportunity and a real accomplishment. I value it so much, and I valued it while I was doing it. I was really proud of myself.”

The women got together most weekends for three or four hours a day, learning patterns and crocheting one or two decorations by the end of the day. For the group, it was an opportunity to socialize and share food while working toward a major goal.

“Once the kids learned the pattern, I would give them a target—maybe 10 decorations by the next week,” Surendran said. “The kids accomplished whatever I gave them. It was initially a bit of a struggle, but they got the hang of it, and they finished their targets way before we did.”

Balakrishnan started crocheting through a charity organization when she moved to the United States four years ago. Surendran told her about the Mother India Crochet Queens, and she was immediately interested.

Balakrishnan hadn’t worked with patterns before, though, so she watched a lot of videos to get herself acquainted with them.

“I think we were a group of three people at first,” she said. “Menaka took up the challenge of teaching the kids and getting them involved.”

Balakrishnan said the patterns, for the most part, were simple. The women were able to do 10 or so in one sitting, as long as they were able to find the time.

“The craziest part was weaving the ends of the decorations together,” she said. “It can drive you insane. We also had to sew every 50 pieces onto a netted cloth so they could be counted for the record more easily.”

Jayaprakash also has a background in crocheting. She learned from her mother and aunties, who taught her how to make bags.

“We came here and Menaka introduced me to this,” she said. “After that, I got the opportunity to contribute some items. I had crocheted some small things before, but this was my first time making decorations. It is a lifetime achievement, and it really was a nice way to spend a day. Good food and good times.”

Kannan also had some experience crocheting, and she was excited to try something new with her skills.

“I’m glad I’m part of this team,” she said. “I had done it as a hobby before. But when Sayee told me about this, I didn’t know it could be more than just a hobby.”

The whole effort was a good mix of experienced crocheters and those new to needle crafting—it made for fun times, a lot of teamwork and some interesting developments, Balakrishnan said.

“If Menaka had doubts about a pattern, she’d call me and ask, ‘How do you do this?’ By the end, we’d give the kids a target of 10 or 20 decorations by the end of the week, but in the next two or three days, they would finish. They’re overachievers.”

That hard work paid off for the women. They were able to meet their goal—and then some—within five months, and they were officially honored with their world record certificates in October.

And they hope this isn’t their last one. The Mother India Crochet Queens are aiming for another record—this time, they want to create the largest online photo album of crocheted items. The Plainsboro crew has already registered for that.

For now, though, they’re all still enjoying the success of this last attempt.

“It gave me a sense of satisfaction, Surendran said. “It was an accomplishment. I felt like I had done something great and important in my life. I value this Guinness certificate very much. It’s a big achievement, and it’s a confidence boost.”