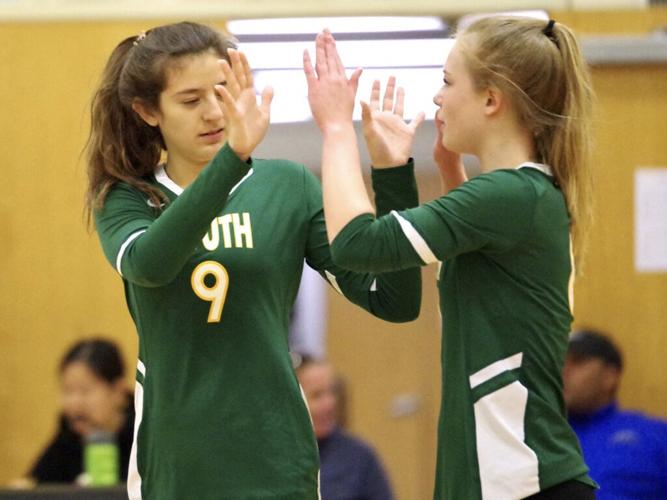 In looking beyond the talent, beyond the dedication and beyond the coaching, Varsha Gollarhalli felt there was a truly intangible ingredient in the High School South girls’ volleyball team’s success this year—fun.

“When we just go out there and play the sport because you love it and it’s such a joy to play with all the other girls,” she said, “we definitely end up playing so much better than if we put so much pressure on ourselves to not make too many mistakes and play almost timid and scared.”

The Pirates were none of those things as they went 10-0 in the regular season and 11-1 overall, with their lone loss coming at Cherry Hill East in the NJSIAA South Jersey Group 4 quarterfinals. South was named the Times of Trenton’ Team of the Year while senior outside hitter Alisa Vukovic was Player of the Year. Granted, it was a shortened season moved from the fall to early spring due to COVID-19, but it will long be remembered.

The Pirates had the right mix with Gollarhalli doing an outstanding job at setter to provide Vukovic and sophomore sensation Sibana Gonzalez numerous opportunities for kills. She also had other weapons, such as junior Skylar Hendrick and freshman Maria Theruviparambi, which made for a pleasant problem trying to keep everyone happy.

“Most definitely,” she said with a laugh. “But (Vukovic and Gonzalez) are two of the best hitters I’ve ever played with in the sense they’re so smart with the ball. They’re not always just pounding it down. They’re really smart with their placement. As a setter you feel some pressure to always give them the best ball because you know how great they can be, but because they’re so great they always know how to better the ball and do literally anything off what I give them. They’re just so amazing.”

Vukovic, named the team’s Most Valuable Player, was unquestioned team leader. Aside from glittering stats—which featured 158 digs, 76 kills, 57 service points and 22 aces—she would help run things at practice when Bower had to be with the Pirates swim team. She always put the team first and was never interested in her own stats, although her talent was blinding.

“During practice the girls would do hitting drills and one time Alisa hit coach Lynch in the head,” Bower recalled. “She was like ‘Oh my God, coach I’m so sorry!’ and he was like ‘No that was really impressive, that was a good hit.’ She was worried about hitting one of the coaches and we were like ‘That’s awesome, that how we want you to hit during a game.’ We talked about some of the digs Alisa had, and some of the saves she made were amazing. The way she could just move across the court and play all six positions was amazing.”

Gonzalez has been the area’s top player in her class since arriving from Puerto Rico as a freshman last year. Having played for the Chilean National Team starting at the 12U level, she brought a wealth of experience and talent to Princeton Junction. Sibana collected 87 digs, 65 kills, 51 service points, 23 aces and 11 blocks in making All-Area (along with Vukovic) a second straight year.

“She’s an amazing player,” Bower said. “She has one of the hardest hits I’ve ever seen. She can place the ball so well. It’s just crazy. She knows how to play the other team really well. Her volleyball IQ is extremely high. She knows how to get the team up and help the team out in practices and how to self-reflect and know where her weaknesses are and where our team weaknesses are. Her court vision is amazing. She can see and place the ball in certain locations. She can place the ball deep in the court, and I just watch and go ‘Wow, that was impressive.’”

Another big hitter was Hendrick, who was named the team’s Most Improved Player after amassing 62 kills, 36 digs, 52 service points, 19 aces and 11 blocks.

“Every year I’ve seen a huge improvement with her and how much she’s grown,” Bower said. “Every time she went up to go hit the ball, I kind of knew she was gonna get a kill. During a lot of games I knew the last point was going to be hers. You could just see it in the air, I saw her going for her approach and in my head I was like ‘That’s it, we got this.’ She was very reliable. Once she’s in position in the front row and starts getting the ball, it’s gonna be dangerous for the other team.”

Making Vukovic, Gonzalez and Hendrick so lethal was the work of Gollarhalli, as offensive threats are only as good as the girl who feeds them the ball. The William & Mary-bound senior, who will spend her first semester in London, racked up 92 assists and 21 digs while directing traffic on the court.

“She did really well,” Bower said. “She had those great relationships with everyone on the team because she’s the one that’s setting everybody. She’s a great kid. One day at practice there weren’t too many kids because of SATs. She helped out the JV team, and then we got this setting target net and she practiced for about half an hour, just her placing her sets to the target. She was pushing the ball in different locations like she’d never done before. She took the time to work on what she needed to get done.”

Varsha was admittedly nervous because this past year was the first she did not play travel ball, while most of her teammates continued to play in the off-season.

“They kept in touch with the ball,” said Gollarhalli, who won the team’s Sportsmanship Award. “This was the longest time I went without touching the ball. I was a little worried I would lose some touch so I put in a lot more work to get more touches on the ball and ease back into it. I definitely feel that helped my confidence. I was able to move the ball around a lot more than the prior season.”

Shakthi Sreenivas, a Texas transplant, was a stellar libero whose family members were actually doing lasso dances when she got on a roll serving in a state win over Toms River North. Both Shakthi and Bower are saddened by the fact her family is moving out of the district and she won’t be back next year. The junior had 105 digs, 31 assists, 46 service points and a team-high 24 aces.

“She did a really great job,” Bower said. “She knows when she makes a mistake I can look at her on the court and she kind of reclaims herself, and she’ll get a feel for where her arms and legs were and say ‘OK, this is where I have to hit it next time.’ She’ll usually talk to coach Lynch and myself about what’s going on, where she needs to be, what her mistakes were. She knows where she has to be on the court and she did a really good job with serving this year.”

Two freshmen who made an immediate impact were Gauri Lavate and Maria Theruviparambi. Lavate is a natural libero who played a lot of defense this year and came up with 43 digs, 44 service points and 17 aces. Theruviparambi is an outside hitter but was at middle blocker this year and had a team-high 20 blocks along with 22 kills 23 digs, 30 service points and 11 aces. Lavate will take Sreenivas’ spot next year while Theruviparambi will move into Vukovic’s role, and Bower was impressed at how both departing players worked with the ninth-graders to get them ready.

Rounding out the team were seniors Reva Alladi, Rachana Dubey and Rishima Kasi, and juniors Danielle O’Shea and Mariamme Latif Estafan. All played a role in a season that went beyond expectations.

“We started off just being grateful to get a season because we thought we weren’t going to be able to play,” Gollarhalli said. “We’re a super strong team and we knew coming in we had a lot of great hitters and were really good offensively. We kind of wanted to make the most of the season we got; and this unexpectedly happened where we were able to be so successful.”

And it all came back to that hidden simple ingredient alluded to by Varsha.

“It was just really fun for the girls, they had a lot of fun playing,” Bower said. “I think that was really crucial to our success, the amount of fun they were having and that good team chemistry they had. They were all just a bunch of friends playing a game and having fun the whole season.”